We were able to divide Cas9 endonuclease, insert it inside viral vectors and confirmed its activity in plants.

In order to test the activity of Split-intein-Cas9 strategy delivered through autoreplicative viral vectors we followed a classical approach. Therefore, we chose Nicotiana benthamiana xylosyltransferase XT1 gene (Niben101Scf04205Ctg025) as targeted gene. Specifically, we selected a target sequence the mutation of which produces the disappearance of a EcoRI restriction site (Fig. 1).

((Fig. 1) Schematic representation of the structure of Niben101Scf04205Ctg025(XT1) with the sewuence of the target site.)

Next, we extract genomic DNA from these four plants and carried out a PCR in order to amplify the mutated region. Afterwards, PCR reactions are purified and digested with EcoRI enzyme in order to determine if mutation has been occurred (Fig. 2). 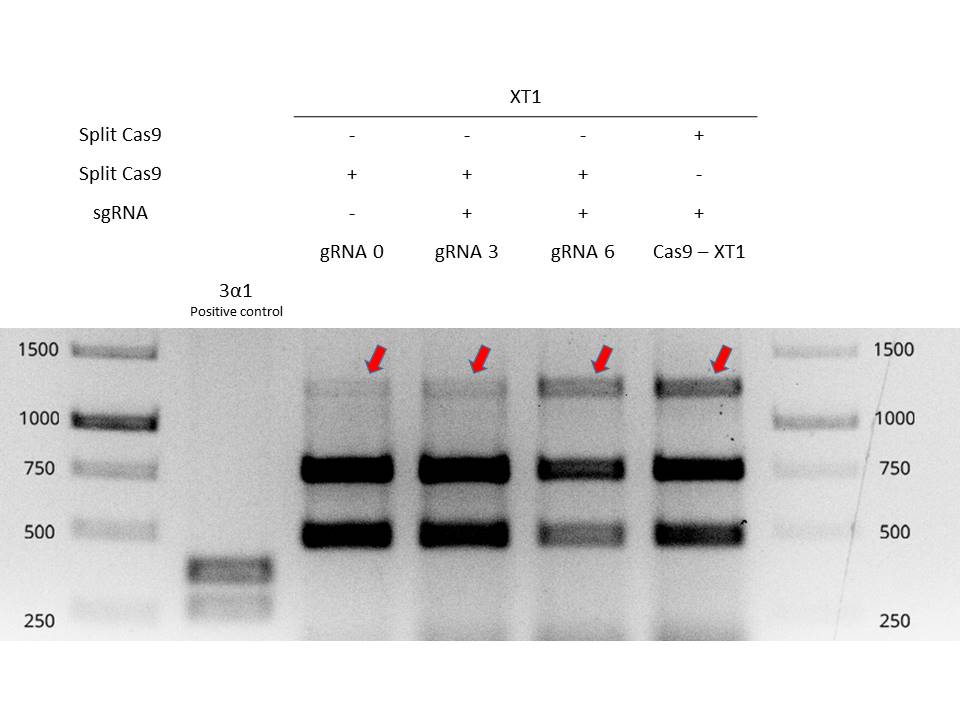 Once the presence of mutations was confirmed, resistant band was purified, and cloned into a vector. Finally, mutation sequences were analyzed (Fig. 2)

We have tested and proved the feasibility of different gRNA Testing System versions through different luciferase assays. In all these experiments different versions of the same target along different gRNAs has been used:

In all these experiments two kind of gRNA were used:

As shown in Figure 4 gRNA Testing System 1.0 (with SAGTI linker) is able to turning ON from an initial OFF state since luminescence signal of tested samples is significantly higher than signal from negative control. However as Figure 5 indicates, the sensitivity of this version is low since positive control is one hundred times lower than internal positive control 35s:Luciferase:Tnos.

(Fig. 5) Comparison of the different mutation ratios. Luminescence ratios from luciferase constitutive expression regulated by pNOS and 35s promoters are added to the data shown in Figure 4

Regarding this results new gRNA Testing Systems versions were designed and tested.
Once all the new versions with the new linkers were built, we performed an assay to determine which of them is the most suitable one. From Fig. 6 we can infer that the best version is the one with AEK linker due to its higher luciferase ratio. 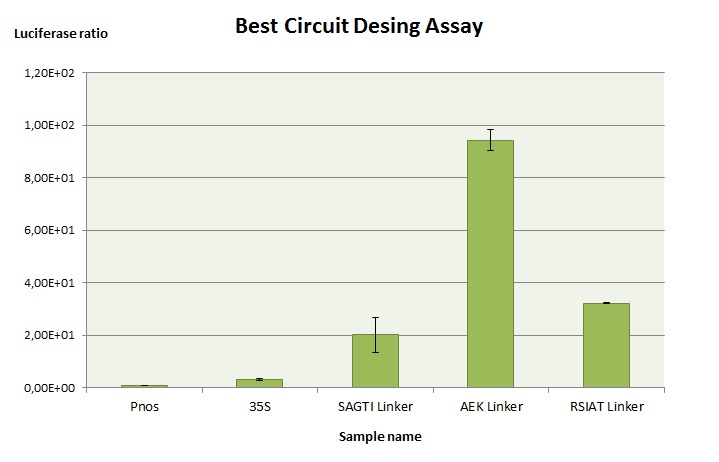 (Fig. 6) Comparison of ratios between the new gRNA Testing versions. All of them present a higher signal than constitutively expressed luciferase under 35s and pNOS regulation.

After choosing the most appropriate version, we carried out an assay to test its capacity of turning ON. As figures 7 and 8 shown, luciferase ratios of Ga20PCR-Ga20gRNA and Ga20cons-Ga20gRNA are significantly higher than negative control. Thus, meaning the new version system works properly. 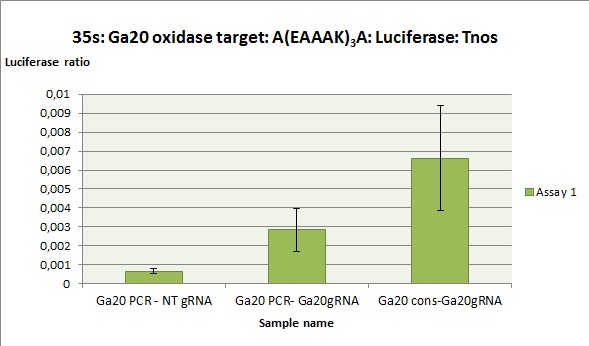 Afterwards we also tested the feasibility and suitability of RSIAT linker version. As can be observed in figures 9 and 10, amplified targets from the desired crop seemed to be not working well in this Testing System version. Although, there is significant difference between the synthetic target circuit and its negative control. 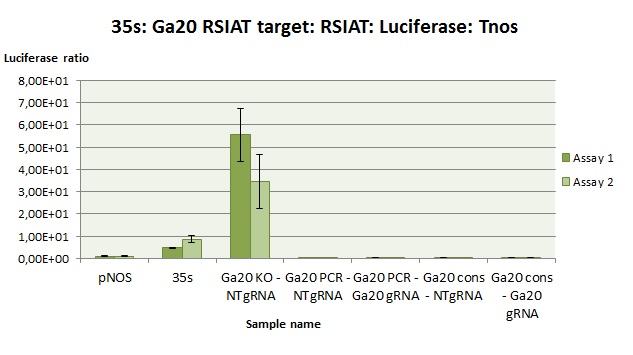 (Fig. 9) Comparison of the different mutation ratios of RSIAT linker version. Luminescence ratios from luciferase constitutive expression regulated by pNOS and 35s promoters are also shown. As can be seen luciferase ratios from Ga20KO-NTgRNA are higher than constitutively expressed luciferase. 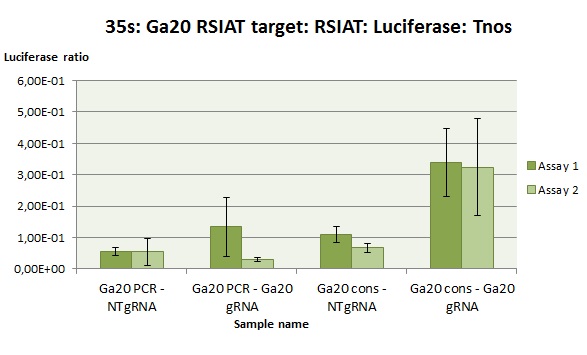 In the pursuit of improving the sensitivity of our system we aim to enhance the CRISPR/Cas9 system efficiency. For our final assay we compared the efficiency of CRISPR/Cas9 system when introducing the target, gRNA and Cas9 endonuclease in the same plasmid inside the cell and the efficiency of the system when target and gRNA and Cas9 are delivered separately. As shown in figures 11 and 12 when all the elements are delivered inside the same plasmid mutation efficiency rises, probably due to the fact that there is more gRNA next to the target site. Thus facilitating the formation of complex Cas9-gRNA near the desired target. 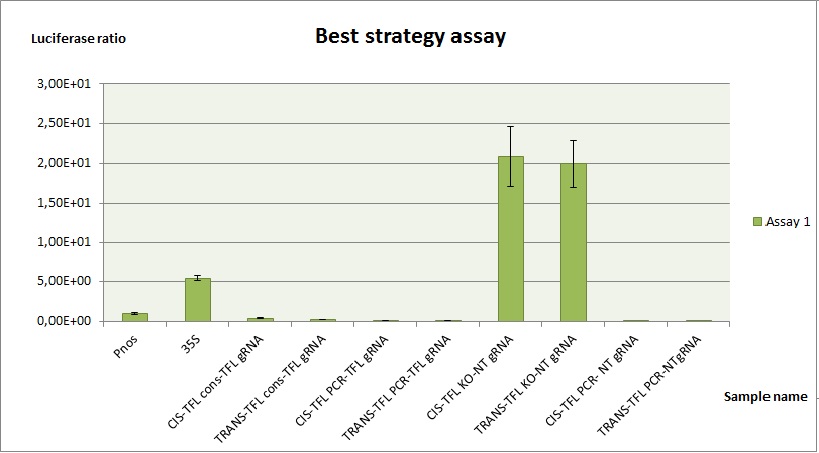 (Fig. 12) Comparison of the different mutation ratios between cis (in the same plasmid) and trans (in different plasmids) construction.