Plastiback is a synthetic-biology powered system to combat the global problem of plastic pollution. Plastiback sustainably breaks down and gives feedback on where PET, a type of plastic, is located. PET is a popular plastic with many uses, including making most disposable plastic bottles. Because of its popularity, PET is also one of the predominant sources of plastic pollution.

While PET pollutes both the land and sea, the majority of PET litter ends up in the ocean. When plastic like PET enters the ocean, it has detrimental effects on ocean ecosystems and can travel up the food chain even to the seafood on our plates. Once in the ocean, PET becomes difficult to clean up and even more difficult to study. Without good information about the distribution of ocean plastic, ocean plastic researchers are hindered from understanding the negative effects on ocean ecology and human health. For researchers like these who are investigating the scope and distribution of PET in the ocean, Plastiback presents a novel and sustainable way to track ocean PET, while also using non-toxic methods to degrade PET!

The main problem: plastic in the ocean and why it matters “... More than 5 trillion plastic pieces, weighing more than 250,000 tonnes float on the surface of the world’s oceans…” 1.


Plastic in the ocean has long been a problem for the environment. It is estimated that 80% of plastic debris in the ocean are from a land-based source, such as landfills, wastewater, coastal recreational activities, and littering2. The other 20% is ocean-based debris, mostly from the commercial fishing industry discarding fishing gear into the ocean 2. When plastic litters the ocean, it can be ingested by numerous marine organisms from whales to plankton, causing health complications to individuals, and possibly affecting the ecosystem overall. Plastic also poses a threat to marine organisms that get entangled and die, either to suffocation, injury caused by entanglement, or reduced fitness. Ocean plastic is not only hazardous to marine life though - plastics have potential consequences for humans too! Rochman et al. (2015)3 studied fish from public markets in Makassar, Indonesia and found that 28% of fish contained plastic particles. One type of plastic, in particular, is a source of significant concern: microplastics.

“Microplastics” was a term first coined by Richard C. Thompson of Plymouth University in the 2004 paper “Lost at Sea: Where is All the Plastic?” to refer to pieces of plastic less than 5mm across. Since then, the study of microplastics and their effect on the environment have been pursued by marine scientists. Because microplastics are small, they are easily ingested by marine organisms and have been linked to reproductive and growth issues in marine organisms1. Additionally, they are able to accumulate harmful chemicals such as dichlorodiphenyltrichloroethane (DDT), an insecticide banned by the U.S. in 19724.

Even with the current state of the art in ocean plastic distribution research, ocean microplastics are uniquely difficult to study. Traditional methods involve crews of ocean scientists dragging fine mesh nets alongside research vessels 1. This process is time, money and labor intensive, requiring specially outfitted vessels and particular expertise. Furthermore, manual plastic sampling makes it increasingly expensive to measure plastic density in remote areas because of the long voyage required to get there. These methods are also low resolution and low-throughput, providing only a few sample locations that are limited to the track of the research cruise. Additionally, traditional sampling methods can fail to detect microplastics because they might be smaller than the mesh net size or difficult to count by eye. Indeed, some microplastics are so small that they can only be viewed under a microscope 1.

These limitations to the current technology for ocean plastic mapping hinder progress towards a complete understanding of how ocean plastic is affecting human and environmental health. With the amount of plastic in the ocean increasing each year, it is urgent that we develop improved plastic detection technologies before it’s too late.

Plastiback is our solution to gaps in ocean plastic research technology. Using the power of synthetic biology, we have harnessed the natural ability of a microbe called Ideonella Sakaiensis to degrade PET and engineered it into a PET detection device. First, Plastiback breaks down PET plastic into nontoxic constituent parts. Then, one of the products of the breakdown, called terephthalic acid (TPA), is fed to a microbial fuel cell which only produces electricity when TPA is present. We detect an increase in voltage from the microbial fuel cell as a signal that PET has been processed by the device, and a GPS ping can be sent to ocean researchers that PET is present in Plastiback’s location. In this way, we break down PET and send valuable feedback to ocean plastic researchers about the distribution of ocean plastic. Below is a schematic of the Plastiback device: 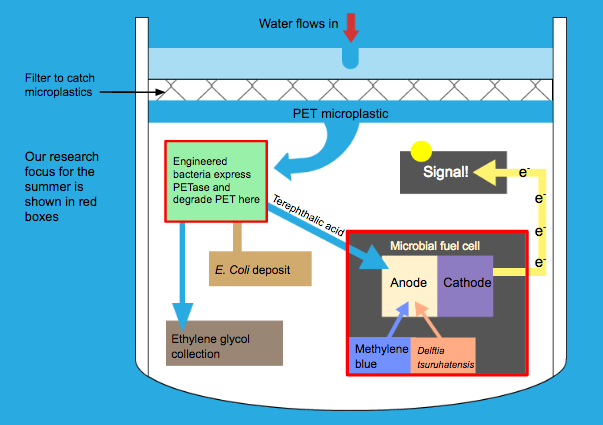 In a floating ocean bioreactor, sea water will be able to flow in. A filter will catch microplastics, which are then broken down by engineered bacteria that express PETase, the enzyme found in Ideonella Sakaiensis to degrade PET. After PET is broken down, TPA will flow to the microbial fuel cell, while the other byproduct, ethylene glycol will be collected in a separate container. In the microbial fuel cell, TPA acts as a carbon source for a type of bacteria called Delftia tsuruhatensis that will produce electrons which are shuttled to the cathode by a mediator known as methylene blue. Finally, this results in an increase in voltage we can measure as a signal that PET was broken down.

In order to sense PET, first we needed to figure out how to break it down. For this, we turned to nature’s solution, a recently discovered microbe that can degrade PET. This microbe, called Ideonella Sakaiensis, was discovered to metabolize PET by the Oda group at Kyoto Institute of Technology in 2016 6. The microbe produces an enzyme, called PETase, which can breakdown PET into terephthalic acid and ethylene glycol. This enzyme was shown by the Oda group to be more active at degrading PET than other known enzymes7. We decided this would be the key to the plastic degradation component of our system. Although the structure of PETase is yet unsolved, we used a homology model to visualize its structure below:

With Ideonella Sakaiensis’ PET-degrading power, we thought we could break down PET so we could detect the presence of its byproducts. However, because Ideonella Sakaiensis is a poorly characterized, it is not a suitable chassis for genetic engineering. To harness the power of PETase, we would use synthetic biology to make the well characterized E. Coli our chassis and engineer our Plastiback system.

Though we are using the PETase enzyme from Ideonella Sakaiensis, we expressed PETase in E. Coli. An E. Coli based genetic system is useful because E. Coli is a well-researched chassis organism that has multiple available strains for protein expression optimization. To find a strain that best expressed PETase, we investigated several genetic systems and strains, including LEMO21 and SHuffle T7. Among the strains we tested, we found that T7 lysY Iq was the optimal strain to express PETase in. We realized that Plastiback needed to do more than just express PETase. We designed our system to tightly control the expression of PETase so that the cells expressing PETase could grow without the metabolic load of it being expressed. Further, we realized that ocean researchers with no synthetic biology experience would need to use Plastiback, so we designed a visualization method with a fluorescent protein that would be allow researchers to check that Plastiback was working properly simply by looking for a green glow. Additionally, the design of our system requires PETase enzyme activity to take place on solid plastic outside the cells, and to remain in it soluble, catalytically active state. In order to get outside the cell, we would need to design a mechanism for secretion. After researching various pathways and secretion systems, we selected 3 secretion tags with significant and convincing literature and/or iGEM precedent for correct protein localisation. We used the YebF fusion protein, used by the 2015 Oxford iGEM team, who successfully used it to secrete a cell lysis protein. We also used the pelB secretion tag, which the 2012 UC Davis team used to successfully secrete their protein in the extracellular medium. We also tested the ompT secretion tag, which uses similar mechanisms to pelB.

To read a complete description of our genetic design, see our design page.

On our results page, we show that we were able to successfully control expression of PETase, use our easy flourescence check to visualize PETase expression, and achieve catalytic activity. With a system to break down PET into its byproducts, we were ready to use these byproducts to sense the presence of PET so that we can feedback a signal to ocean plastic researchers.

Motivation for a Microbial Fuel Cell

When designing our project, we realized that we could sense TPA, one of the products of PET degradation, by using a device called a Microbial Fuel Cell. In a microbial fuel cell, a bacteria that can survive on TPA as a carbon source would convert the TPA to electricity. We could sense the presence of TPA by the corresponding increase in voltage from the microbial fuel cell, and this signal could send feedback to ocean researchers.

Currently, Microbial Fuel Cell (MFC) technology doesn’t yet produce enough electricity to power anything large, but fortunately our application allows a small amount of electricity to make a significant impact. Because oceanographers don’t currently have an efficient and mechanized way to track ocean plastic concentration, the ideal purpose for electricity produced by our MFC is sensing ocean plastic in a floating bioreactor.

The answer to the pressing question of whether we can generate an electric signal, using terephthalic acid as the substrate, comes from a relatively novel device called a Microbial Fuel Cell. This device contains specific bacterial strains, located in its anode compartment, and produces electrons from the bacteria’s oxidation of the carbon source or electron donor. Then electrons are shuttled onto an anode either by an exogenous mediator or membrane protein.

However, electrons are not the only charged atomic particles moving around. Protons go through the cation exchange membrane, separating the anode and the cathode chambers, onto the cathode compartment, where they meet the electrons and oxygen (since the cathode side is usually left open to air), producing water as the final compound. The directed flow of electrons is what generates a current (electricity) in our device 8(Logan). 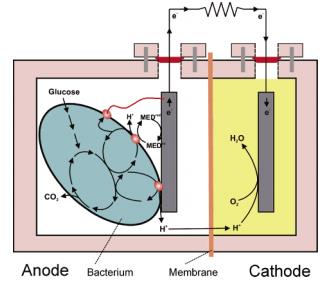 How to Create a Microbial Fuel Cell with Terephthalic Acid as a Carbon Source:

In order to create an MFC that utilizes terephthalic acid, we needed to address two main issues:

*Details of how we designed our system (and other considerations for MFC assembly) can be found here.

On our results page, we show that we are able to produce an electrical signal from the biproduct of PET degredation (TPA) in a microbial fuel cell. The graph on this page shows voltage produced when we use Delftia tsuruhatensis to metabolize TPA, using methylene blue as an exogenous mediator.

By integrating biological plastic degradation with generating an electrical signal in the microbial fuel cell, we can achieve Plastiback’s vision of both degrading and detecting PET. We show the PETase enzyme expressed in E. coli is catalytically active and easy to visualize. In the presence of PET, PETase could catalyze the breakdown of PET into TPA and other byproducts. Starting with the byproduct TPA, we show that the bacteria in our microbial fuel cell can utilize TPA as a carbon source and produce an electrical signal indicating the presence of TPA. Thus, we complete the process of translating PET plastic into a signal for ocean researchers to map microplastic pollution in the ocean. And, we sustainably break down the plastic while doing it!