Plastiback is a remote PET sensor that relays geographic information of PET in the ocean back to researchers studying plastic in the ocean. Our project design can be split into two parts: the genetic system and the sensor (microbial fuel cell) system. Although we make a distinction by describing two systems, both systems must work in tandem to become Plastiback. Because our sensor system depends on the byproducts of PET breakdown, our genetic system must break down PET with control and efficiency. In our genetic system design we considered how to control, visualize, and secrete PETase, the enzyme responsible for PET breakdown. In our sensor system, we considered how to best construct a microbial fuel cell to send our signal.

In order to break down PET for sensing, we first had to design a genetic system for E. Coli to express PETase, the enzyme in I. Sakaiensis that breaks down PET. While designing our system, we ran into two important questions: How would we control expression? And how could we visualize expression?

Why might we want to control expression? Why not constitutively (always) express PETase? Because PETase is not native to E. Coli, if we overexpress the protein it can accumulate in the cell, creating inclusion bodies. While inclusion bodies can contain functional proteins, it is a challenge to get them out of the cell without lysing the cell. Additionally, overexpression of an exogenous protein can have huge costs to the host cell, slowing down growth. To solve these two problems, we decided to use a T7 promoter which is inducible by IPTG.

The T7 reporter gives us control over the expression of PETase. We can turn it “on” using IPTG and vary the amount of IPTG added to change expression levels. The following schematic explains how the T7 promoter works:

The expression strain we paired with our T7 promoter was T7 Express lysY/Iq Competent E. coli. This strain of E. coli has a T7 RNA polymerase under control of the lac promoter. When IPTG, an allolactose mimic, is added to growing cells, it enters the cell and triggers the transcription of T7 RNA polymerase. The T7 RNA polymerase can then bind to the T7 promoter on our PETase construct and begin transcription of PETase. The E. coli strain also has a lysY protein (an inhibitor of the T7 polymerase) that reduces basal expression that occurs without IPTG induction. The lysY protein, however, does not interfere with IPTG induced expression.NEB source

Visualizing expression is important because researchers need a quick way to evaluate whether Plastiback is working or not. We imagine that the device would need “check-ups” by ocean plastic researchers, and that these inspections should be made as quick as possible to get back to detecting ocean plastic. This problem was solved by using the reporter protein sfGFP in our construct. sfGFP, when fused to PETase, will allow us to see whether the cell is expressing our protein. When researchers use Plastiback, all they would need to do is shine a UV light to check whether Plastiback is working properly.

sfGFP stands for super folded GFP, a variant of the reporter protein Green Fluorescent Protein. When we express PETase, sfGFP is fused to it, allowing us to readout expression of PETase through sfGFP visualization. (Read more about sfGFP on our parts page here.) See our results from visualizing sfGFP and PETase here.

After considering our first two design questions, how to control expression and visualize expression, we found ourselves facing another design problem. Illustrated in the gif below, if we turn “on” the promoter and express PETase in the cell, it will accumulate in the cell but won’t degrade PET that is outside the gel.

The solution is to secrete proteins outside the cell. To do this, we investigated three secretion systems. Each system uses a secretion “tag” that is added to the genetic construct. Two of our secretion tags, pelB and ompT, use the cell’s endogenous mechanisms to direct the protein outside the cytoplasm. After proteins are transported to either the periplasm or cell surface, the secretion tag is then excised from the amino acid sequence. Our third secretion tag, YebF, is actually a protein that becomes fused to our PETase-sfGFP protein and carries it outside the cell. You can read about each of these parts on our basic parts page here.

After designing our genetic constructs, we used a variety of experiments to characterize our parts. Read about it on our experiments and results pages! Or, scroll down to hear about our microbial fuel design.

How we chose bacteria

In order to use terephthalic acid as the substrate in a microbial fuel cell, the bacteria needs to be able to metabolize terephthalic acid. Additionally, the bacteria must have a membrane to exogenous mediators; this is necessary because the exogenous mediator enters the cell to gather electrons. After looking through the literature, we decided to test the bacteria Bacillus sp. 35889, D. tsuruhatensis, Serratia marcescens subsp. Sakuensis, and Bosea minatitlanensis, as these four bacteria were all found in regions with high terephthalic acid concentration such as bottle recycling plants and wastewater treatment plants.

Our most viable candidate was D. tsuruhatensis sp. nov. The bacteria was first discovered by a Japanese research group 2(Shigematsu et. al 2003). Armed with the knowledge that terephthalic acid is a contaminant in wastewater, the group decided to visit a wastewater plant with the hopes of finding an organism capable of degrading the acid. The scientists collected activated sludge on site and later attempted to isolate a strain of bacteria from the sample capable of utilizing terephthalate as its sole carbon source. They identified this bacterium as a new species of D. tsuruhatensis.

Although there are other species of bacteria capable of degrading terephthalic acid that our team acquired over the course of a research, we determined through experimental analysis that D. tsuruhatensis was the most efficient (as shown in the Project Experiments page ).

The Motivation for using Exogenous Mediators

In general, several specifications should be considered when choosing materials for a microbial fuel cell. Starting with the anode, conductivity, biocompatibility and chemical stability are of a crucial importance when choosing materials for this chamber. Literature results reveal that carbon felt is the best anodic material and graphite the least good one, generating less electricity than the first choice. However, we simply decided to use a graphite flow field (where liquid flows in a serpentine pattern across the electrode) (Logan, Parra)1. That said, according to our discussion with an MFC expert, graphite is excellent at preventing the formation of surface oxides.

Furthermore, in our experiments we used a “single-chamber,” “flat plate design” microbial fuel cell that was purchased through the “Fuel Cell Store”. Even though this is inherently a methanol fuel cell, it works well in our case because “it was designed to flow methanol on the anode, a liquid solution, and air on the cathode” which is perfect for an MFC in our considerations (Dr. Erika Parra). 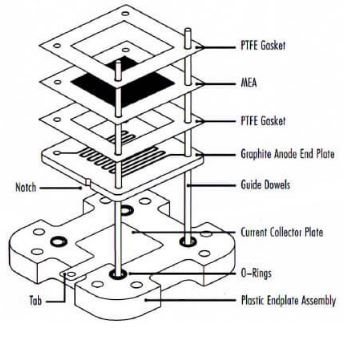 Due to our present design limitation, we let the cathode be placed in direct contact with air. Again, this served our purpose well, since according to Logan et.al, “much larger power densities have been achieved when aqueous-cathodes are replaced with air-cathodes”1 (Logan). The other benefits of oxygen include “its high oxidation potential, availability, low cost (it is free), sustainability, and the lack of a chemical waste product (water is formed only as the end product)” 1(Logan). On the cathode we use a platinum coated carbon cloth, where the platinum-coated portion (not duller backside) is carefully put in contact with the membrane. After consultation with the MFC expert, Dr. Parra, we decided that we would use a diffusion layer, that came with the fuel cell, and put it over the carbon cloth..

Finally, the carbon exchange membrane we used was the popularly used Nafion membrane, which functioned as a separator between the anode and cathode chambers and the place where excessive protons would pass through to go the cathode side of the microbial fuel cell. 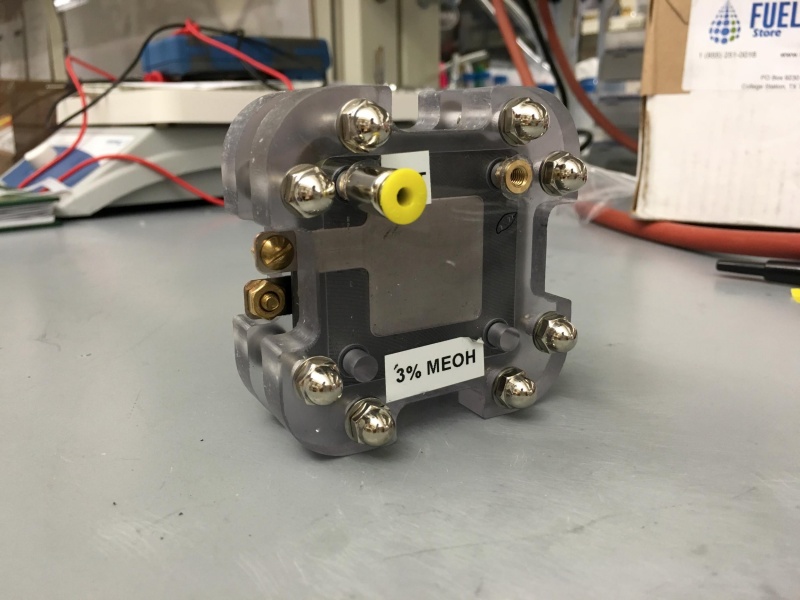 After all the pieces are put together, we place bolts into the holes of the fuel cell, with one washer sandwiched between each bolt and the fuel cell. Then, the bolts are tightened using a torque wrench, making sure that all of the bolts receive a quasi-similar torque.

3D Printing our own MFC

During the early stages of our project, we were inspired by the work of previous iGEM teams and wanted to build on the work on those who came before us. we were inclined to use our own 3D printed PTA microbial fuel cells, based on the Blueprints provided by another iGem team, Bielefeld 2013. However, after meticulous observations with Dr. James Weaver, it was decided that this type of fuel cell could result in leaks of substances from the anode and cathode chambers, mixing between the compartment substances and improper mixing in the anode side of the fuel cell. A completely new design, while keeping in mind several fluid dynamics considerations, would have proven helpful but outside the scope of our experiment, which deals at its core with the proof of concept that terephthalic acid can be used in an MFC by D. tsuruhatensis. However, for our experiments, we used a commercially purchased MFC (a methanol fuel cell that we repurposed). 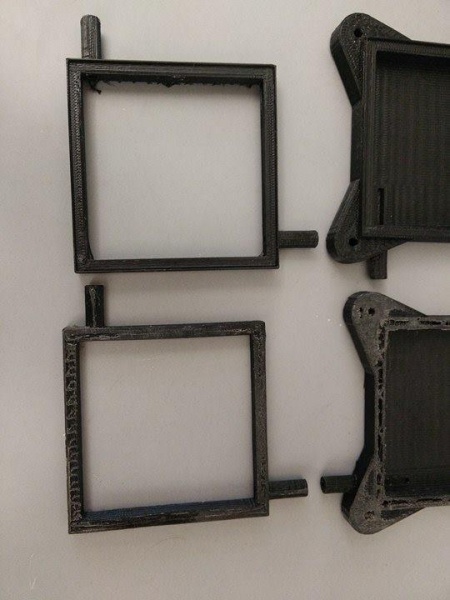 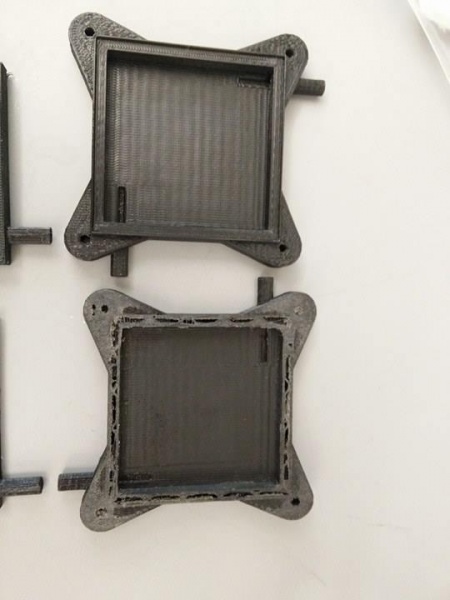