After constructing our system, we needed to prove that it functions the way we designed it to. To test Plastiback, we asked the following questions:
1. Can we visualize the PETase-sfGFP fused protein?
2. Is our inducible system working?
3. Are our proteins present?
4. Is PETase catalytically active?
5. Is our microbial fuel cell bacteria using terephthalic acid as its primary carbon source?
6. Can we detect terephthalic acid via a voltage increase?
The following is a description of our answer to these questions through experimental results.

Visualizing the PETase-sfGFP protein will be an important checkpoint for ocean plastic researchers that are evaluating whether a Plastiback device is working or not. By simply shining a UV light on the cell culture, an ocean plastic researcher without synthetic biology experience can determine whether Plastiback is working or not based simply on fluorescence. If PETase-sfGFP proteins are being expressed, Plastiback will fluoresce. Otherwise, the problem can be diagnosed. It is also important that our inducible promoter is truly controlling protein expression and uninduced samples do not produce much PETase. In the visualization experiment, we can also test whether our inducible system is working because we would expect uninduced cells not to fluoresce, or at least fluoresce at a low basal level.

Following the method stated under sfGFP visualization, we grew up T7 lysY Iq cells containing our plasmids. We then induced the cells with 0.4M IPTG, except for a sample that was kept as an uninduced control. After inducing for 6 hours, we then visualized the cells by placing 3 microliters of cells in media onto a microscope slide and using a Zeiss Axio Observer.Z1 fluorescent microscope to image our cells. 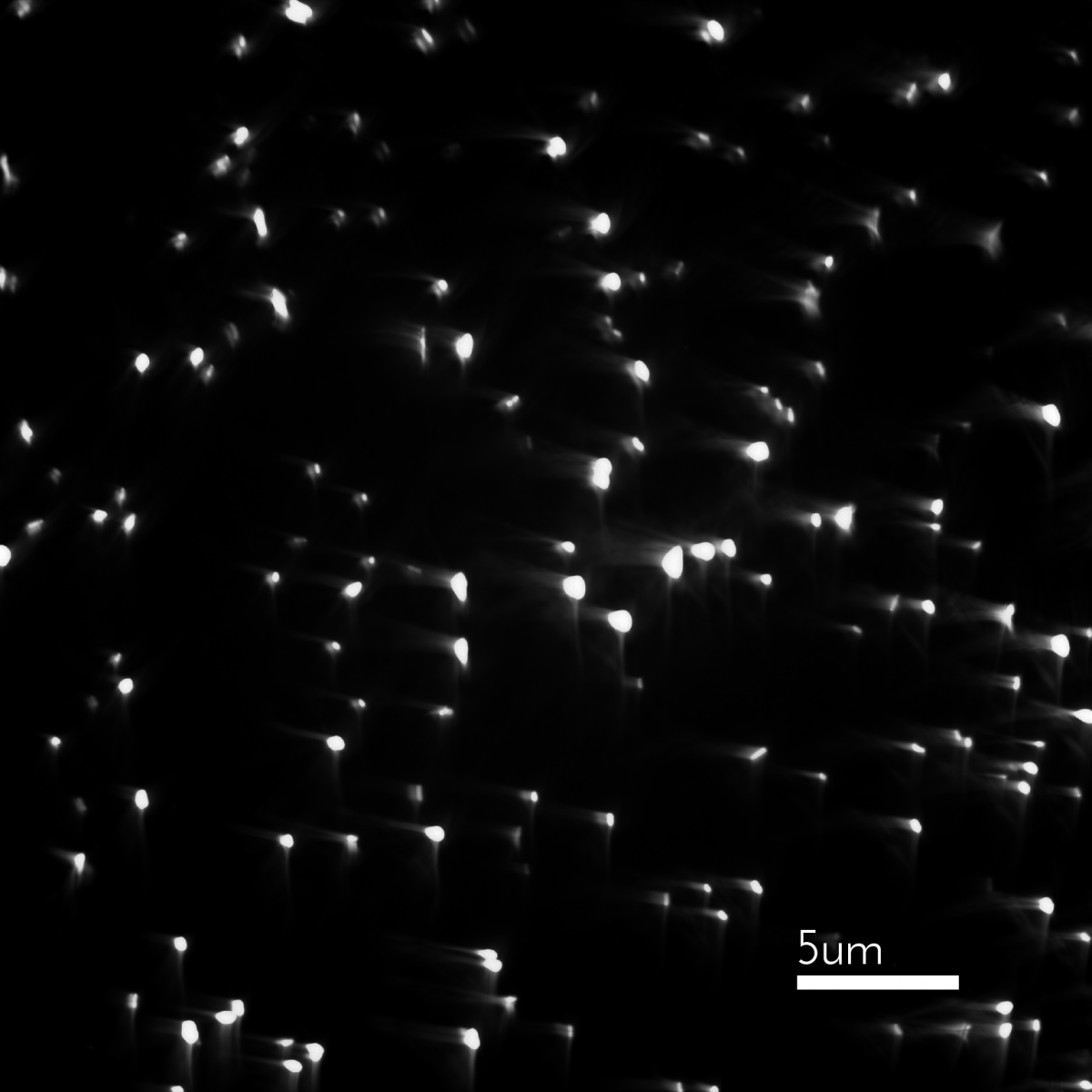 These images illustrate that our PETase-sfGFP part is being expressed. They also confirm that we have inducible control over our construct because the uninduced sample shows basal expression.

Next, we can validate protein expression further with SDS Page and Western blot visualization. Although we confirmed the presence of our protein with sfGFP visualization, an SDS Page will further confirm by showing that a protein of the correct weight is being expressed. Additionally, a Western blot will show that our histag is functioning. The Western blot is more specific than an SDS Page because only the histagged protein will bind.

Before performing the SDS Page we grew up T7 lysY Iq cells containing a plasmid with PETase under control of the T7 promoter. Cells were induced with 0.4M, 0.1M, or 0M IPTG for either 6 hours or overnight, at either 15 or 30 degrees C. After expression, cells were then lysed according to our ultrasonication protocol, and supernatant and pellet were collected for the SDS Page gel. Supernatant is the soluble fraction of cell lysate, while pellet is the insoluble fraction. After collecting supernatant and pellet, we ran the SDS page, with an additional lysozyme control. The following image highlights our significant result: 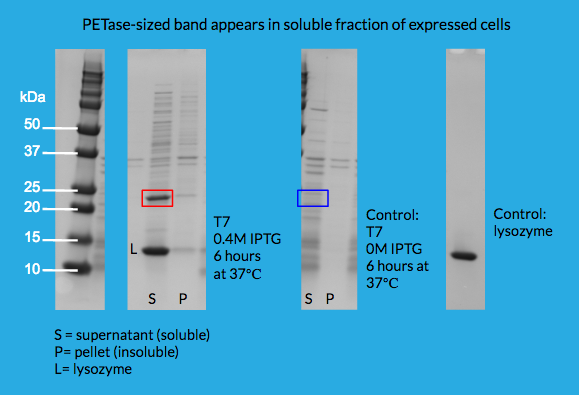 The red box shows an overexpressed protein between 20 and 25 kDa. PETase has a weight of 24 kDa, so the band is exactly where we would expect to see PETase. In the control that has not been induced (0M IPTG), we do not observe a band between 20 and 25 kDa. This experiment again demonstrates our system’s inducible control: the blue box shows there is no band in the absence of IPTG.
If you are wondering what the dark band below the PETase band is, it is lysozyme that we used in our cell lysis protocol. Lysozyme was run as a control, which you can see has a dark band in the same location.

For the SDS Page protocol, please refer to our experiments page.

An additional experiment we performed to confirm the presence of PETase was a Western Blot. While the SDS page can show a protein of the proper size is being expressed, a Western allows us to probe the identity of protein itself. To make PETase easily detectable via Western Blot, we designed our constructs to include a “His tag” which is targeted by a commercially available antibody. By running an SDS-PAGE as described above, we could separate all the proteins in the cell by size. Then we could transfer these proteins to a paper membrane and stain with a the commercially available anti-His antibody. Because our recombinant PETase protein is the only his-tagged protein in the cell, we would expect to see a signal only from the band which contains PETase. See details of this protocol on our experiment spage. Here were our results: 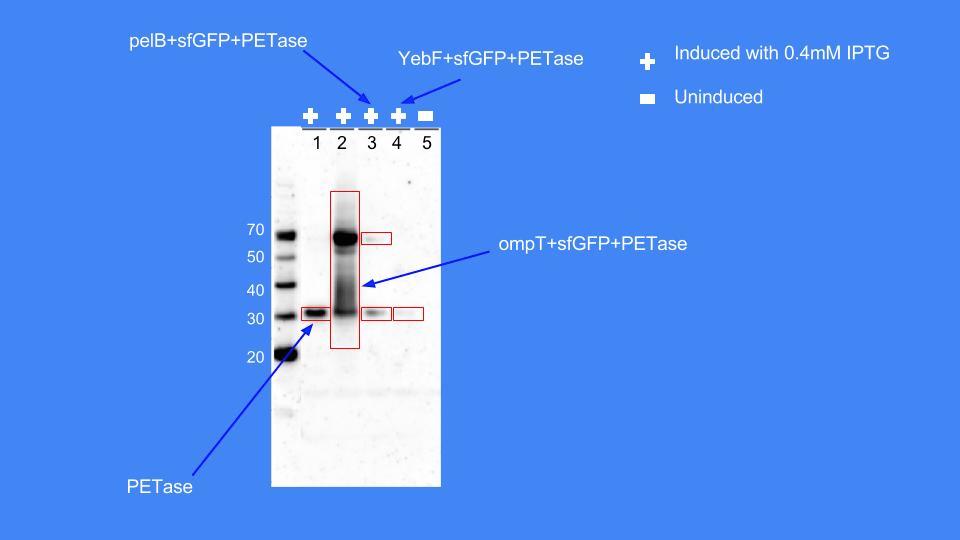 At 30 kD, we see a band which corresponds to the approximate expected size of PETase (28.6 kD). This band is strongest in lane 1, which contains lysate from our PETase construct that is unfused to GFP and induced with IPTG. Additionally, we see a band at 70 kD in lanes 2 and 3, which is the expected size of PETase-sfGFP fusion. Unexpectedly, we also see a PETase-sized band in lanes 2,3, and 4, which should only have a band at 70 kD for the PETase-sfGFP fusion. We hypothesize this is because the PETase GFP fusion is being degraded by proteases because it is so large. We hypothesize the smear we see between 70 kD and 30kD in lane 2 is because of the same phenomenon, such that the PETase-GFP fusion is being chopped into varying length fragments, each which has a histag and therefore shows up on the blot. Finally, we see no signal in lane 5, which was lysate from cells containing the same construct as lane 1, but uninduced.

In conclusion, this Western demonstrates that we have inducible control over PETase expression.

After constructing our PETase-sfGFP fusion plasmids and demonstrating we had inducible control PETase expression via sfGFP visualization, SDS Page and Western Blot, we were ready to test whether the PETase-sfGFP construct catalytically active. From the original paper published on PETase1 we knew that the PETase could be catalytically active in our chassis organism E. coli, but we didn’t know whether the upgrades we made to the system would interfere with the catalytic activity. In particular, the sfGFP fusion we made to allow Plastiback to be easily serviced by ocean researchers might interfere with the enzyme’s active site, for example. Not willing to sacrifice this ease-of-use feature, we set out to show that PETase-sfGFP could still be catalytically active.
We adapted an assay used by the UC Davis 2012 Team that could characterize PETase’s esterase activity with a colorimetric readout. The assay, called the p-nitrophenyl butyrate (pNPB) substrate assay, demonstrates enzyme activity when the breaking of an ester bond in the substrate produces 4-Nitrophenol. This absorbs at 405nm and can be detected with a spectrophotometer2.
To conduct this assay, T7 lysY Iq cells expressing our PETase-sfGFP plus pelB secretion tag construct were were OD standardized and induced with .1 Molar IPTG or left uninduced. Cells were lysed, and triplicates of induced culture lysate were mixed with pNPB substrate or the same lysis buffer they were already in. To show that any change in absorption was due to PETase-sfGFP fluorescence rather than other artifacts of the cell lysate, an uninduced control was run with pNPB substrate. To control for the background absorption of pNPB, just the substrate was also run. OD 405 absorbance of these samples was measured using a Synergy H1 plate reader every 15 seconds for 10 minutes. Below are our results: 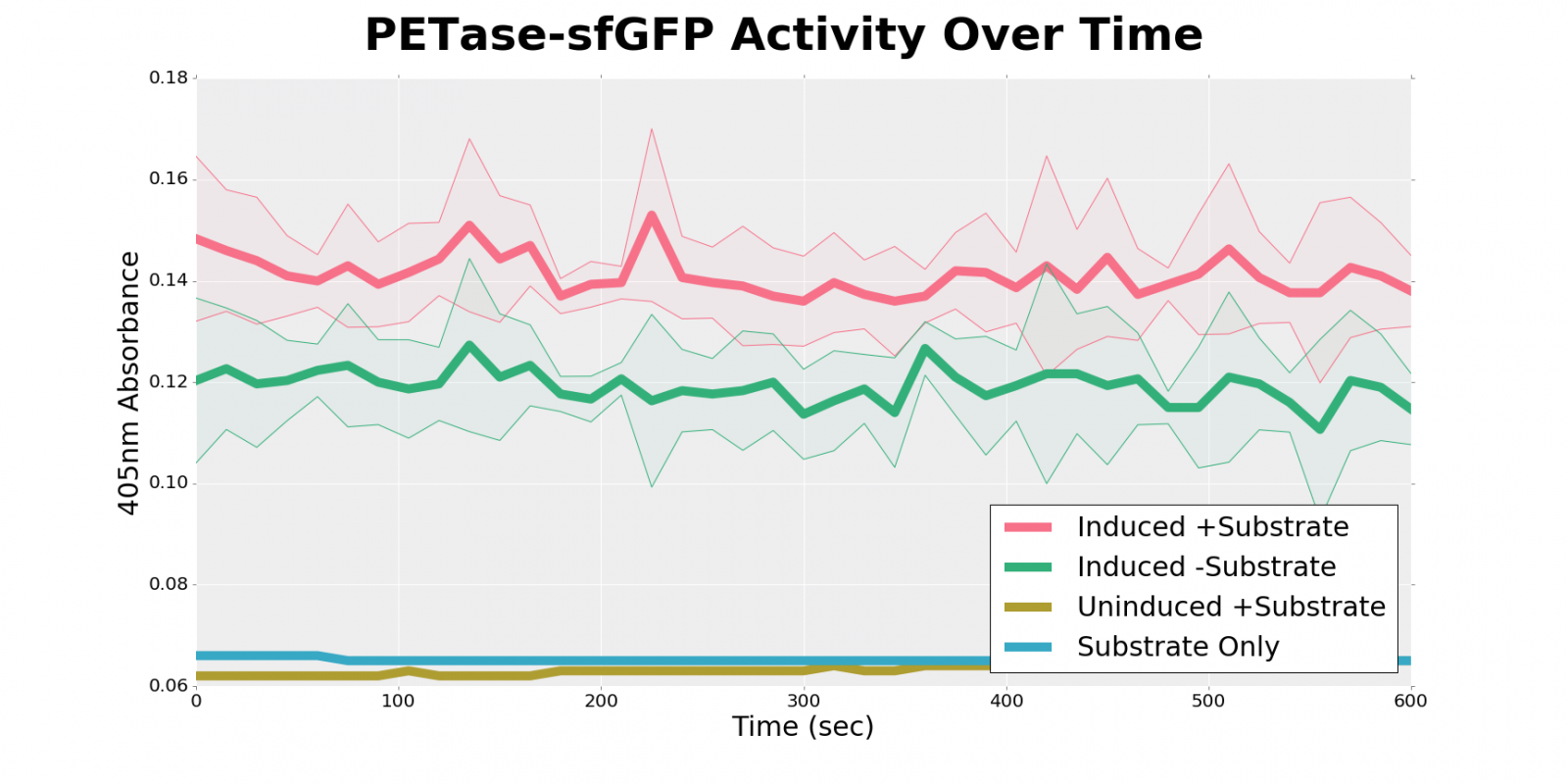 PETase fused to GFP is catalytically active on the PNPB substrate over time. Lysate induced to produce PETase was incubated with PNPB substrate (pink) or lysis buffer (green) and 405nm absorbance measured over time. The sfGFP tag produces some absorbance reading which is why the green trend line is not closer to zero. Upon the addition of PNPB substrate, absorbance increases (pink trend) suggesting that PETase is catalytically active on the PNPB substrate. Plus and minus 1 standard deviation is shown in the shaded region. Without inducer, otherwise identical cell lysate has low absorbance as it is not expressing PETase or the GFP tag (brown). Likewise, the substrate by itself has low absorbance (blue).
Our results indicate that PETase-sfGFP has background absorbance without the pNPB substrate, but that with the pNPB substrate absorbance increases, showing that PETase-sfGFP is able to catalyze pNPB into 4-nitrophenol which will absorb at this wavelength. The background is absorbance is likely due to the sfGFP fusion, which typically emits most strongly at a different wavelength but would also absorb some at 405nm. Further, this is evidence that the induction system we designed has strong control over PETase-sfGFP expression because we see almost no absorbance when the cultures were uninduced, and strong absorbance otherwise.
In conclusion, this validates that PETase is catalytically active with our sfGFP fusion. Plastiback can be easy to use with a fluorescent “systems check” and also break down PET.


Now that we have the PETase enzyme working, we want to optimize the pH to have the most enzyme activity and fastest growth rate of E. coli. The problem is that PETase is most enzymatically active at pH 9 while E.coli growth is fastest at pH 7. For this reason, we ran E. coli growth curves to see how fast E. coli grows at different pHs in order to try to find a compromise or happy medium. 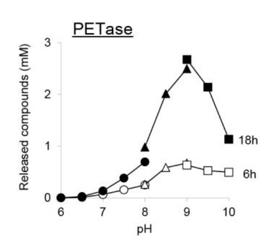 As shown in the graph below, there is a big dropoff in growth between pH 8.5 and pH 9.0, therefore the happy medium between E. coli growth and PETase enzyme activity is around pH 8.5. For this experiment, we had E. coli grow in LB medium and adjusted pH using NaOH. For a more detailed description, please refer to the project experiments page. 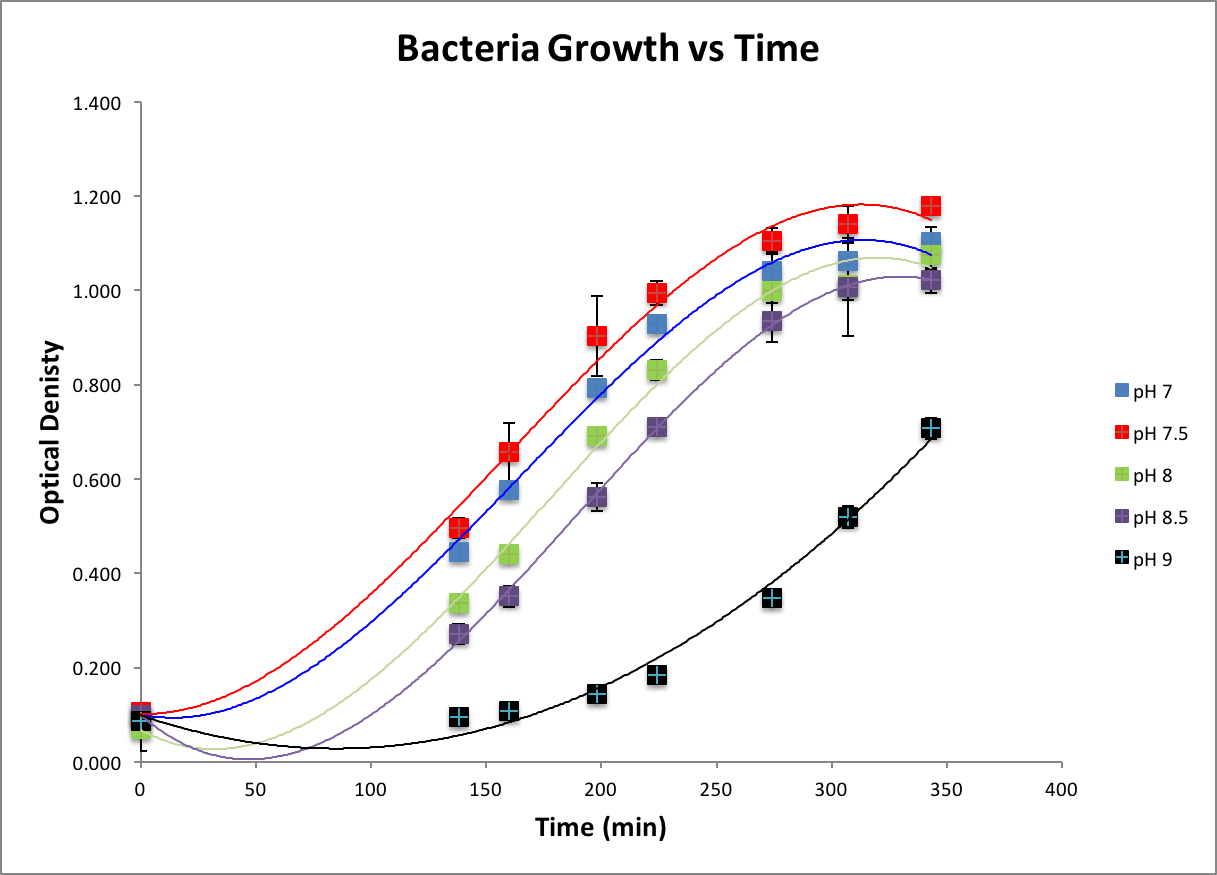 Now that we have catalytic PETase and have optimized pH for our engineered E. coli, we want to be able to produce a signal in the presence of our PET degradation byproduct, terephthalic acid (TPA). 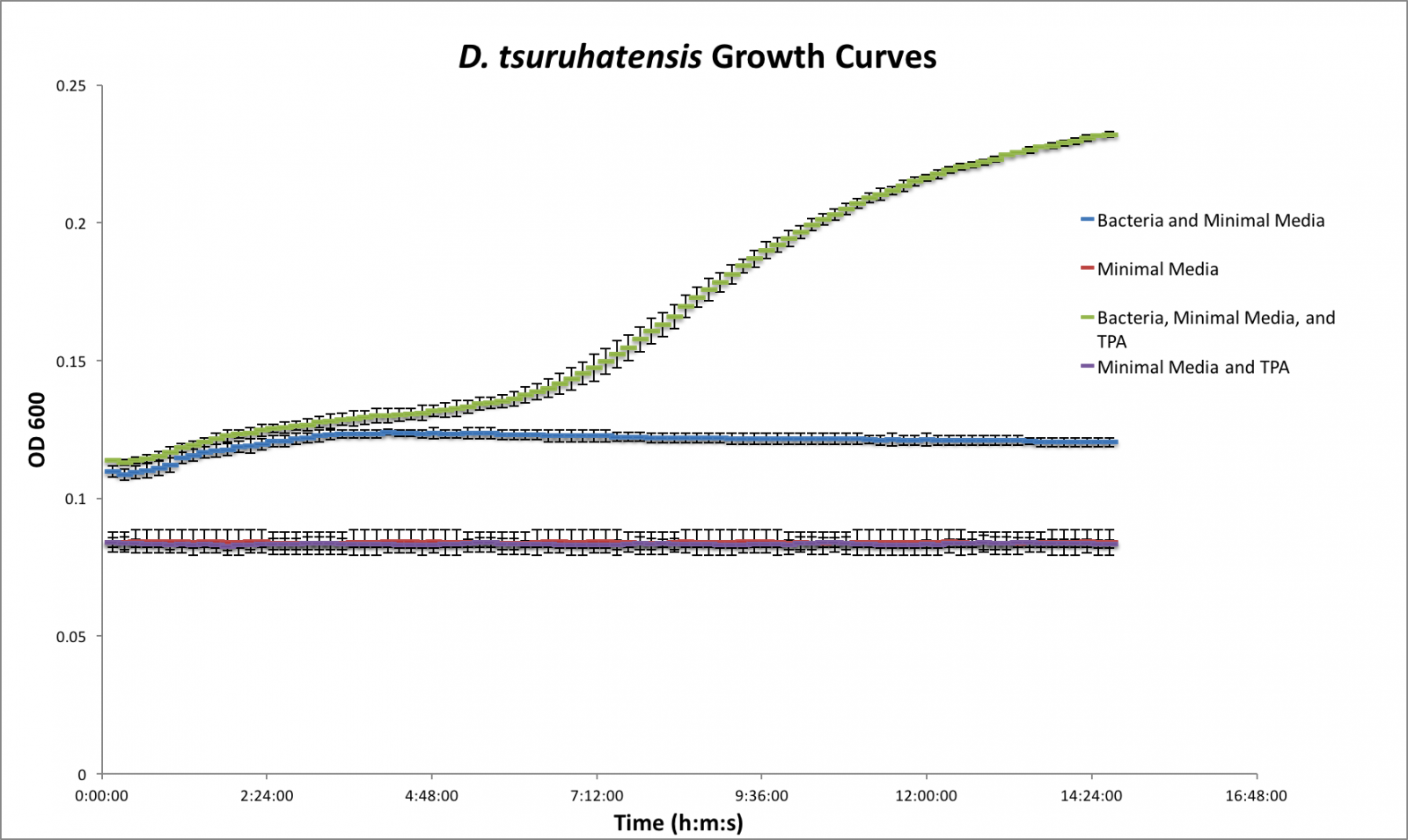 TPA can be detected through electrical signal 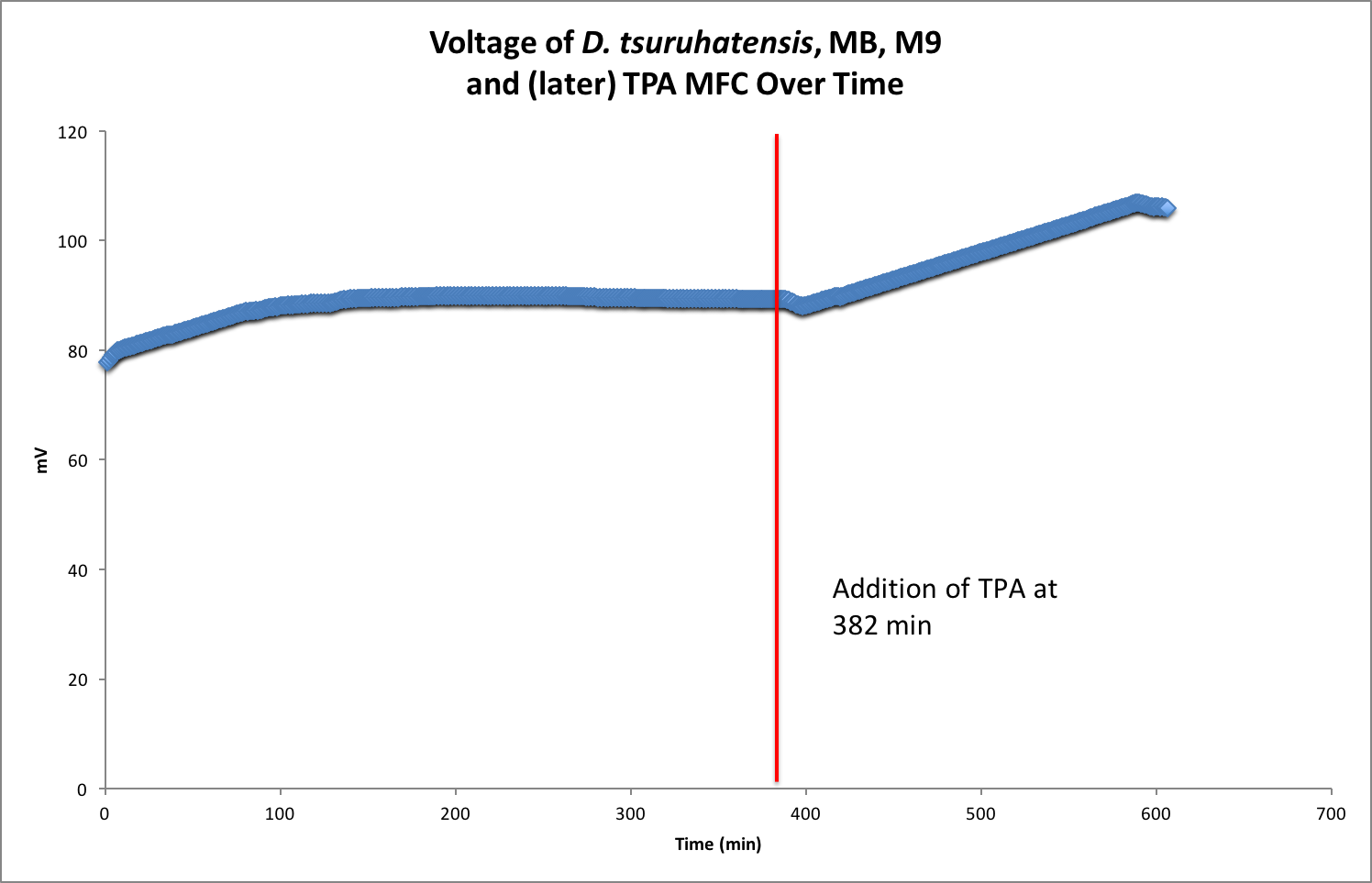 Our team achieved our objectives and successfully managed to demonstrate PETase enzymatic activity in a laboratory setting. In the future, our team envisions our enzyme degrading plastic collected directly from the ocean. To this end, we reached out to Parley for the Oceans, an organization dedicated to tackling threats to our oceans. After contacting Parley, we were redirected to their Junior Project Manager, Lisa Gran, who sent us 10g of “mixed raw plastic” from the organization’s most recent beach cleanup. Future directions of our project would include characterizing degradation of the acquired mixed plastic to simulate a real-world situation and work towards optimizing our system.