We have done assays on pure chemicals and bacteria synthesized chemicals.

Below I explain the steps and calculations involved in these assays in detail. 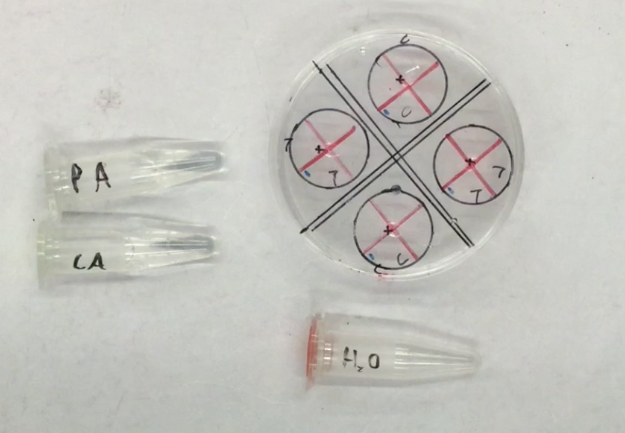 We also tried using water as negative control for the assay. The Response index is +0.07. Which means the assay can show that the worms have no significant response, neither attraction or repulsion, to water.

We tested on pure chemicals of cinnamaldehyde and phenylpyruvic acid to check if our assumptions about the attractiveness were correct.

Based on the assays done on pure chemicals, cinnamaldehyde is a repellent while phenylpyruvic acid is an attractant. Hence, it would be more convenient for us to choose parts that are registered on the iGEM. We found a synthesis pathway of cinnamaldehyde with genes in the iGEM parts library, given by the 2013 UBC team [1] . The pathway is constructed with 3 genes, where the starting substrate is phenylalanine, an amino acid. With the sequence of the three genes provided, we designed and ordered the 3 oligo DNA from IDT, the Integrated DNA Technologies, Inc..

Each ordered oligo DNA sequence encloses a constitutive promoter J23100 [2] , medium strength RBS B0034 [3] , a gene in the cinnamaldehyde synthesis pathway and a double terminator B0015 [4] , with iGEM prefix and suffix [5] for a more convenient use in 3A assembly cloning steps.

We were supposed to sub-cloned these genes into 3 separate plasmid backbones then clone the 3 parts into one plasmid backbone. And lastly transform the plasmid into bacteria. Unfortunately, we were not successful in doing it. 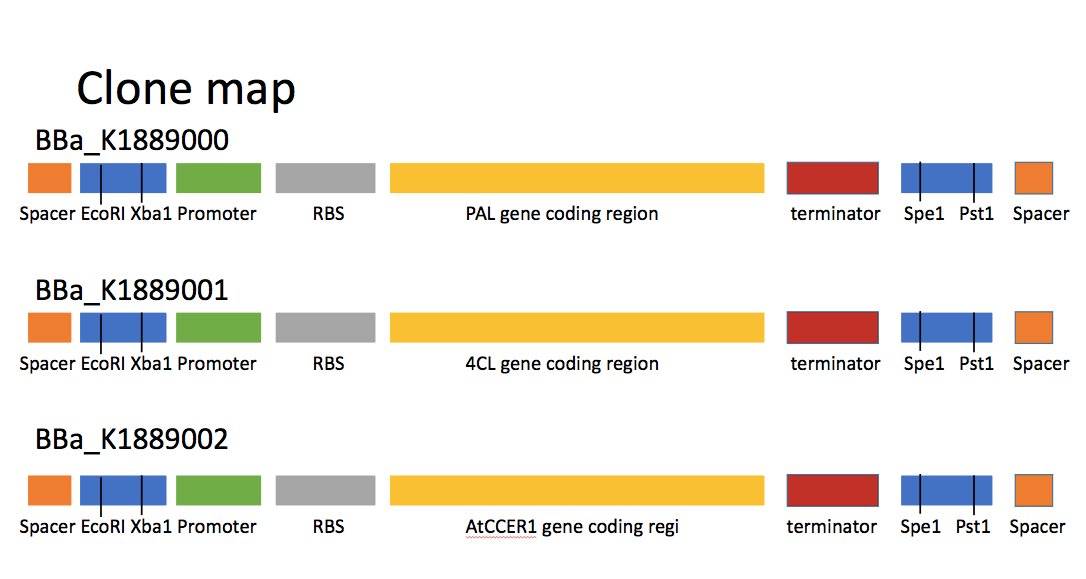 Phenylpyruvic acid is an attractant. However, we had difficulties find a protein sequence that enables the production of phenylpyruvic acid in the iGEM community. As such, we decided to synthesize it ourselves. We discovered a protein sequence for producing phenylpyruvic acid [6] on NCBI website. We again ordered the oligo DNA from IDT. The ordered sequence also encloses a constitutive promoter J23100 [7], medium strength RBS B0034 [8], the target gene and a double terminator B0015 [9], with iGEM prefix and suffix [10]. Our new gene is an amino acid deaminase gene [11].

After successful cloning bacteria with phenylpyruvic acid producing gene, we used this composite part to perform our assays.