Since 1964, plastics production has increased 20-fold, reaching 311 million tonnes in 2014, the equivalent of more than 900 Empire State Buildings. Plastics production is expected to double again in 20 years and almost quadruple by 2050.
Plastics have been intensively developed during the last 50 years, among which poly(ethylene terephthalate) (PET) is one of the most widely used polymers worldwide. From daily containers to medical implements, from fibers for textile to ‘space blanket’, nowadays PET is used in almost every single area of our life due to its premium performance, such as durability and the easiness to be molded into different shapes. However, the durability of PET was found to become the biggest drawback, non-degradable, which leads to a global accumulation of plastic waste.

Plastics have been intensively developed during the last 50 years, among which poly(ethylene terephthalate) (PET) is one of the most widely used polymers worldwide. From daily containers to medical implements, from fibers for textile to ‘space blanket’, nowadays PET is used in almost every single area of our life due to its premium performance, such as durability and the easiness to be molded into different shapes. However, the durability of PET was found to become the biggest drawback, non-degradable, which leads to a global accumulation of plastic waste.

With the increasing awareness of the worldwide problems associated with white pollution, many solutions have been brought up in dealing with the plastic waste. Compared to the traditional chemical recycling processes which have been considered extremely harmful to the environment, enzymatic hydrolysis of PET is presently evaluated as an environmentally friendly strategy for recycling post-consumer PET wastes. And during the last 15 years, many natural enzymes extracted from microorganisms have been found to be capable of decomposing PET.

The biodegradation of PET has much more advantages than traditional ways of degrading PET for its low cost and low harm to environment. In recent decades, many labs around the world have proposed a variety of ways to degrade PET biologically. The most inspiring one is the biodegradation ability of a recently found bacterial, called Ideonella sakaiensis 201-F6, by Shosuke Yoshida and his colleagues from Japan, which has been studied and published in Science this March[2]. They analyzed the degrading pathways and isolated two kinds of enzymes, PETase and MHETase. The PETase degrades PET into MHET (mono(2-hydroxyethyl) terephthalic acid) and MHETase degrades MHET into TPA (terephthalic acid) and EG (ethylene glycol).

We synthetize the two genes according to the sequences from NCBI, and our project aims to improve the degrading abilities of the two enzymes, especially the key enzyme, PETase, which degrades macromolecule PET with significantly low rate (60mg PET film (20 × 15 × 0.2 mm) was degraded totally by PETase after 60 days according to the Supplementary Materials[3]). We designed a microbial consortia to degrade PET and its products TPA and EG completely, as well as a reporting and regulation system R-R System to make the expression visible and controllable. When we assay the enzyme activities, we use unconventional method, Cell-Free protein expression system 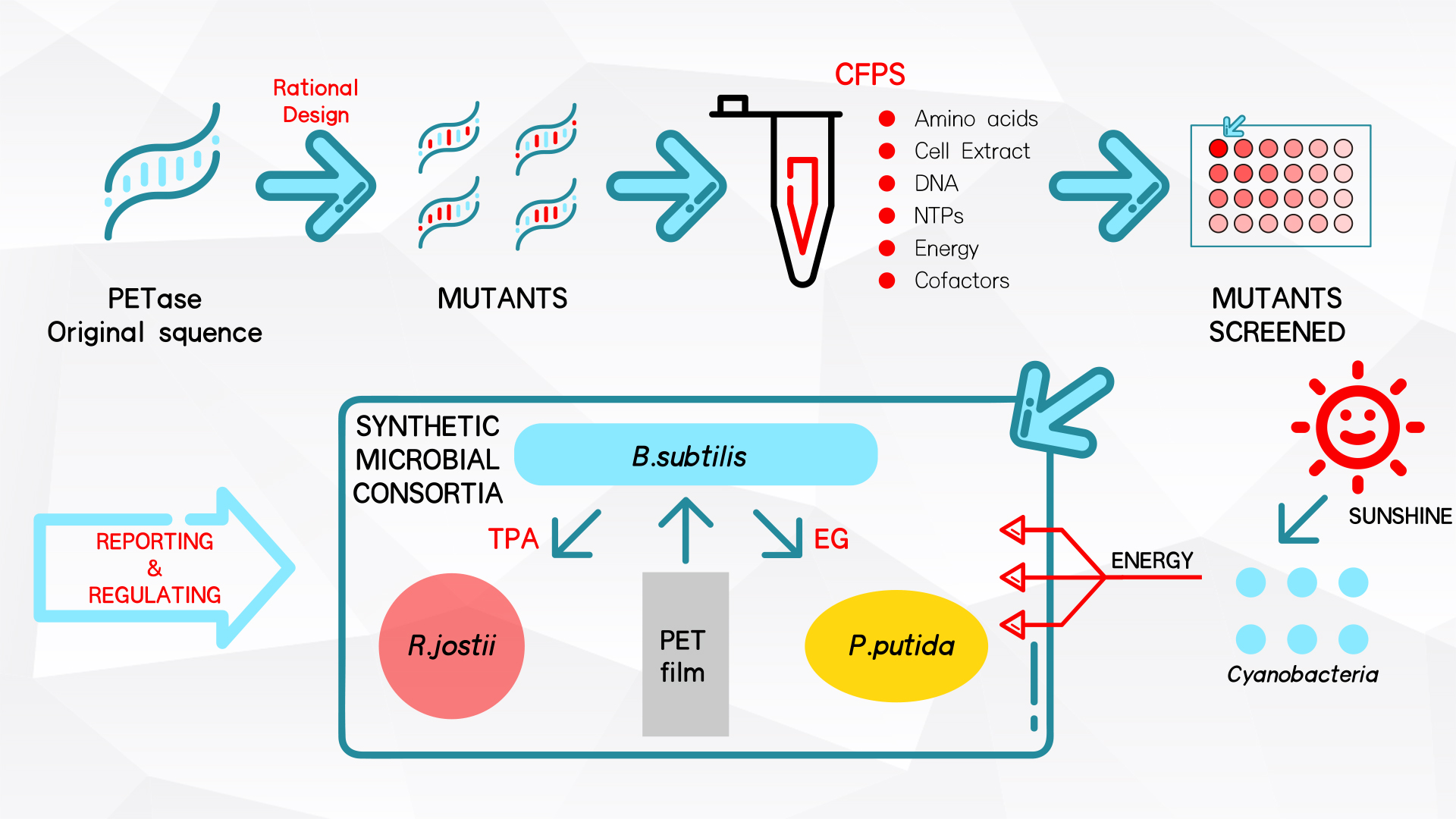 As is known to all, the activity of enzyme depends on the interaction of enzyme molecules and substrate molecules. However, the structure of PETase has not been determined yet, so we do not know how the enzyme interacts with substrate PET. The lack of enzyme structure causes serious problems to our project. We had to apply another way to rationally design our enzyme molecule to achieve higher activity. We used a kind of PET hydrolase, ThC_Cut2, whose structure had been determined correctly, as our reference. We speculated the active sites of PETase according to the structure of ThC_Cut2. In order to increase the activity of PETase, we come up with two ways. First, we should make the active sites more exposed so that the reaction will be easier to take place. Second, we should increase the hydrophobicity near the active sites because of the high hydrophobicity of PET surface. We totally designed 22 site-directed mutants and expressed them in Saccharomyces cerevisiae and then assay their activity to determine which design is valid.

We want to apply a new way to assay the activity of enzyme. Due to the simple constituent, fast expression speed, and low disturbance of cell-free protein expression system, it becomes our first choice. We used the E.coli CFPS to express modifided PETase and compared them to the wild type as a assay method. The PETase gene is fused with a CFP(Cyan Fluorescence Protein) gene so that the cyan fluorescence signal can act as a reporter of PETase expression level. And than we used the enzymes we had got to degrade PET and detected the degradation products.

The product of degradation are TPA and EG, which are also toxic to environment. The best way to solve this problem is to continue degrading them biologically. We found that Rhodococcus jostii RHA1 owned the ability of degrading TPA into acetyl coenzyme A that can enter the tricarboxylic acid cycle to be transformed into carbon dioxide, and the Pseudomonas putida KT2440 can utilize EG as its sole carbon source. Therefore, we could mix the Rhodococcus jostii RHA1, Pseudomonas putida KT2440, and another kind of organism which can secrete the two enzymes together so that we can successively degrade PET into carbon dioxide. To reduce the difficulty of constructing a microbial consortia, we used a kind of prokaryote, Bacillus subtilis, which also has strong secretion ability, to express the two enzymes. We changed the culture conditions and culture mediums to avoid the competition among the three kinds of bacterial. We assayed the PET, TPA and EG degrading ability in respect to prove the advantage of this system.

In order to express PETase in a visible and controllable way, we build the reporting-regulation system (R-R System). The reporting system is based on the promoter CpxR from iGEM official kit, which can be indirectly induced by inclusion body in periplasm of E.coli. We use RFP as the reporting protein for its visible red fluorescence under natural light. If the PETase was overexpressed, the inclusion body will unavoidably form in periplasm and the RFP will express. The regulation system has two parts. The first is based on the regulation system, we change the RFP gene to ddpX gene, which can degrade the peptidoglycan in cell wall to cause lysis of E.coli so that the accumulated enzyme can be released. The second is based on the TPA positive feedback system. We insert a leader sequence which can be regulated the TPA before promoter to make the promoter inducible by TPA. We test this system in Saccharomyces cerevisiae.

We applied the former part BBa_K339007 constructed by iGEM10_Calgary in our R-R system. This composite part consists of a CpxR responsive promoter (BBa_K135000), a ribosome binding site (BBa_B0034), a mRFP gene (BBa_E1010), and two terminators (BBa_B0010 and BBa_B0012). The CpxR responsive promoter can respond to the CpxR protein which appears when there are misfold protein in the periplasm of the E.coli and start the transcription of the downstream mRFP gene so that the red fluorescence can be detected.
We applied this part in our reporting system. We transformed the PETase gene together with this part and induced the expression of the PETase gene. To make the reporting effect visible. We centrifuged the culture medium with the speed of 12000rpm for 1min, and directly observed by bare eyes. 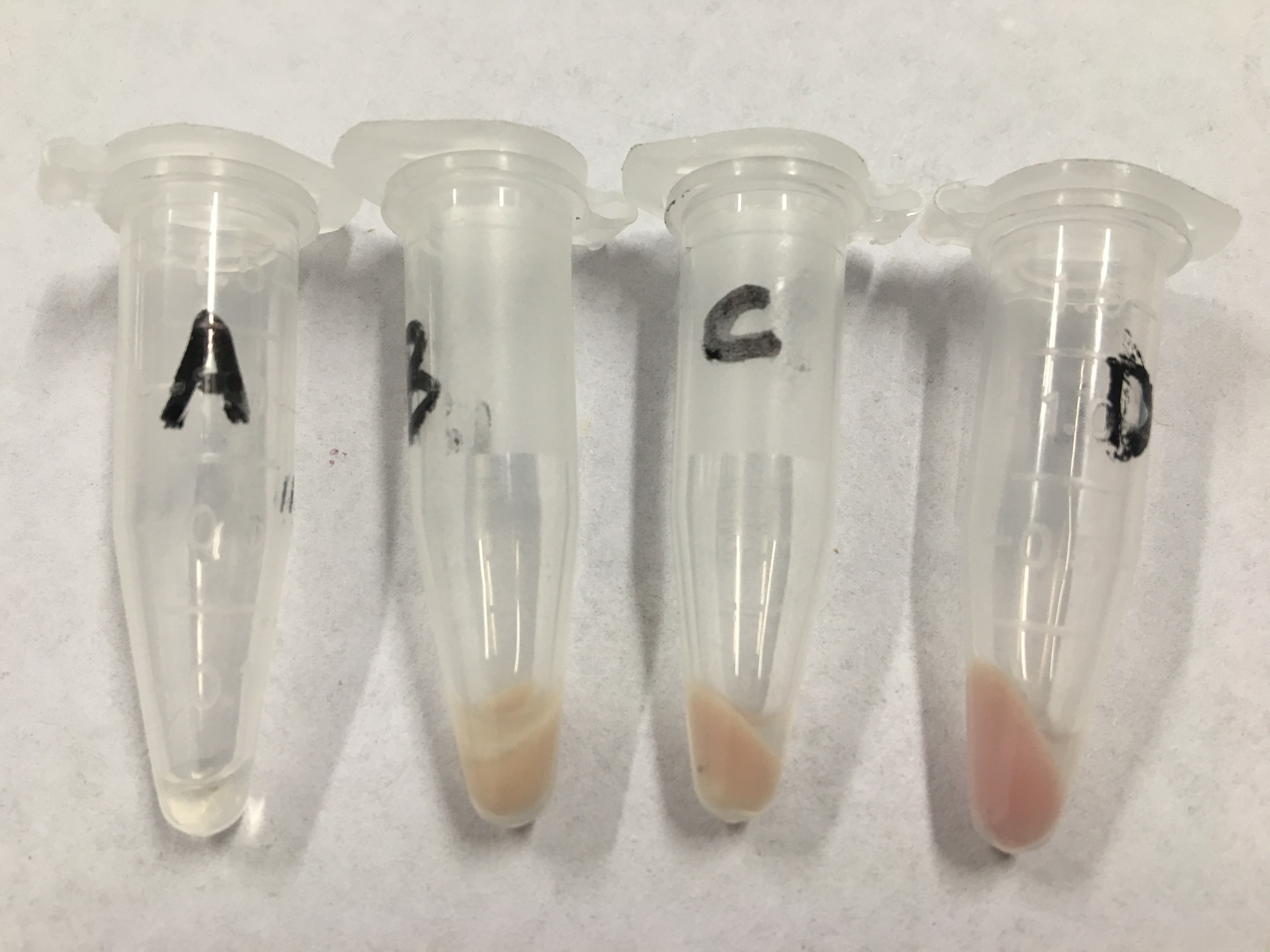 Therefore, when the exogenous gene overexpress in the E.coli, the CpxR induced mRFP gene also express and lead to the emission of red fluorescence. The little red fluorescence in the bacterial without transformed into the PETase gene is largely likely to be caused by the basic expression of CpxR protein in the E.coli. However, when the PETase gene overexpress, the formed inclusion body can significantly increase the expression of CpxR protein to induce the expression of mRFP.

Based on the mentioned part BBa_K339007, we introduced the novel ddpX gene into this part in order to express the ddpX, a enzyme which can cause cell lysis, under the condition of the overexpression of PETase gene. Therefore, the cell will be broken down and we can easily purify the enzyme without the complicated step of breaking cells. We did the improvement by changing the original mRFP gene to the ddpX gene (Part: BBa_K2110004). The ddpX gene was obtained by colony PCR of E.coli. Considering there is no restriction endonuclease cutting site among the subparts, we used PCR to amplify the CpxR promoter-RBS sequence and linked it with the plasmid backbone and the ddpX gene. Then the new part BBa_K2110008 was obtained. 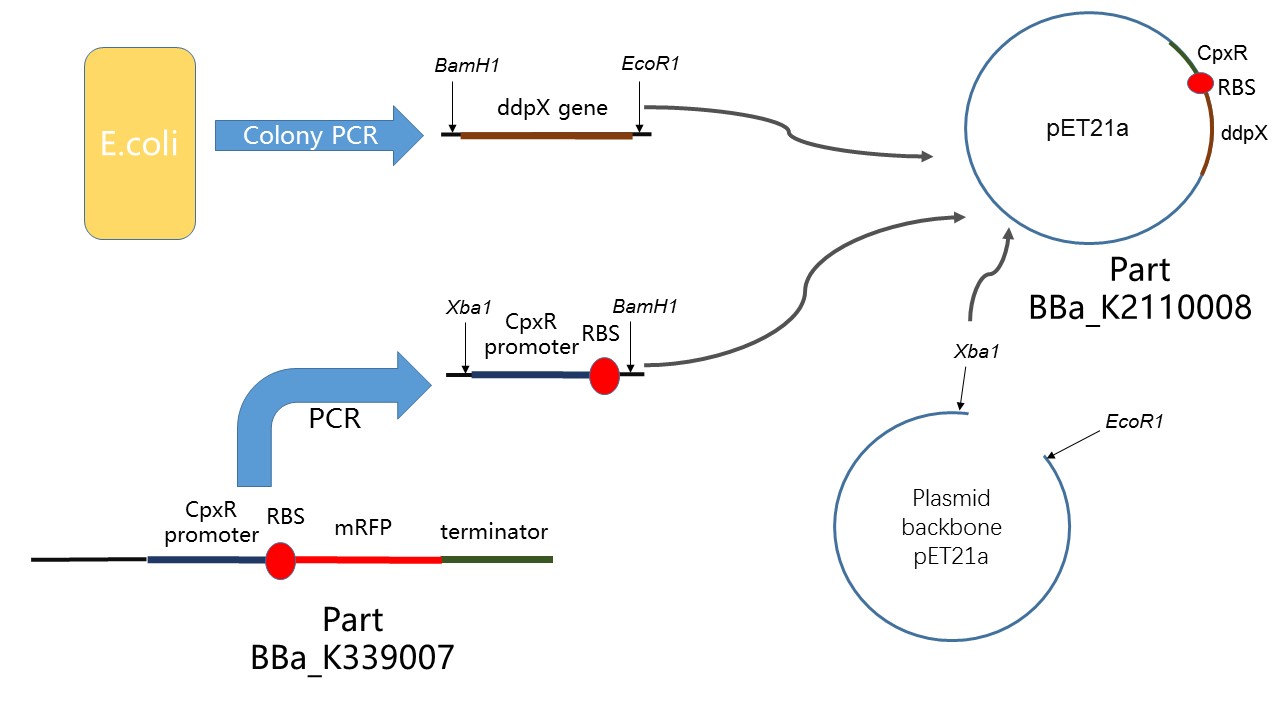