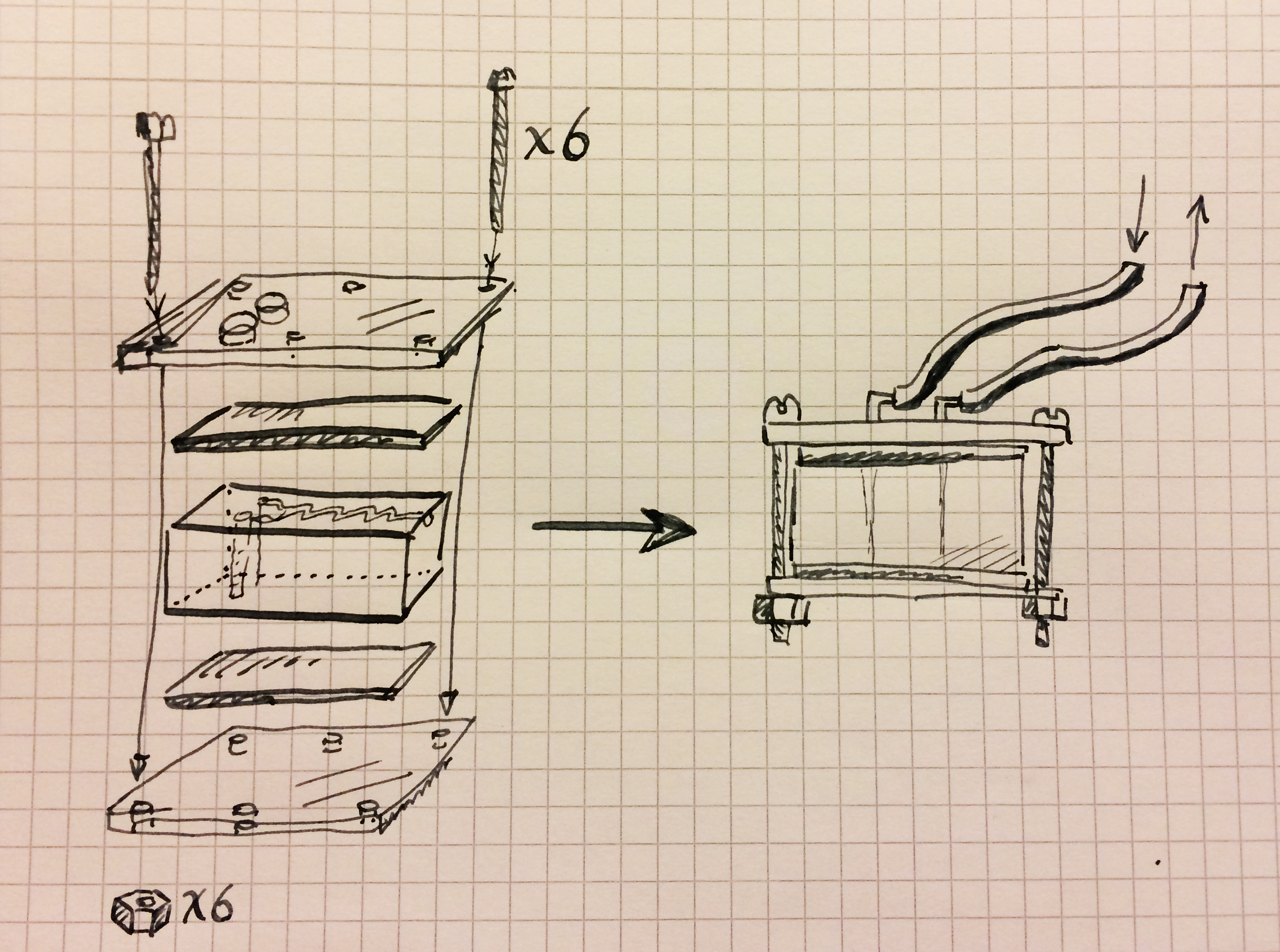 The microfluidics group were in charge of designing, manufacturing and maintaining the chips that were created. We went over several iterations of designs until we settled on the box designs.

We had 3 main phases of designs.

Flat, thin and large designs with many features. During this period we tried to make a mould with multiple features on it. This design paradigm was quickly scrapped mainly due to the moulds (and therefore the chips) easily becoming warped during the curing process. We still gained some valuable insight and were able to stresstest the 3D-printer and find its limits. The chip in Figure 1 is about 7x3 cm (slightly larger than a microscrope slide).

Smaller, thicker rectangles. These chips were designed to be used for a single purpose. Size-wise, these were about 2/3rds of the chip in Fig. 1 and were reinforced below with a grid-like pattern to counteract the warping. However there were still some problems with warping (about one out of four turned out to be good), so we went back to the drawing board to create our finalized design.

The basic design is a box which is 2.2x3.3x2.5 cm. It has a thick base and thick walls which contain the actual workable feature area. The base and walls severely reduce warping, and also allows a higher degree of stability during PDMS pouring and curing. The feature area is where channels can be placed and is the part of the design which will actually be translated into a PDMS chip. The feature area is 1.6x3.0 cm on the finalized designs.

Early in the summer it was decided that we would primarily work toward creating a functional chip for heat shock, and if there was time to make a electroporation chip and design an incubation feature/chip. Unfortunately there was only time enough to be able to comprehensively test the heat shock chip. The electroporation chip was designed, printed and assembled but there was not enough time to test the transformation capabilities of the design, mainly due to difficulties in getting the electroporation electrodes firmly and correctly attached to the chip.

The running channels in the electroporation chip are 200 µm across and 100 µm high, while the “channels” where the electrodes are supposed to be placed are 200x200 µm. The inlet channel for the cell suspension is 500 µm wide and 100 µm high. The total distance that the liquid travels inside the resistor is 103.4 mm or about 10 cm. The resistor which we added is theorized to produce longer and larger droplets, since these scale with the length of the outlet channel.(Ref 1.).

Resistor: http://www.rsc.org/suppdata/lc/b5/b510841a/b510841a.pdf Supplemental information to Formation of droplets and bubbles in a microfluidic T-junction—scaling and mechanism of break-up Piotr Garstecki, Michael J. Fuerstman, Howard A. Stone and George M. Whitesides