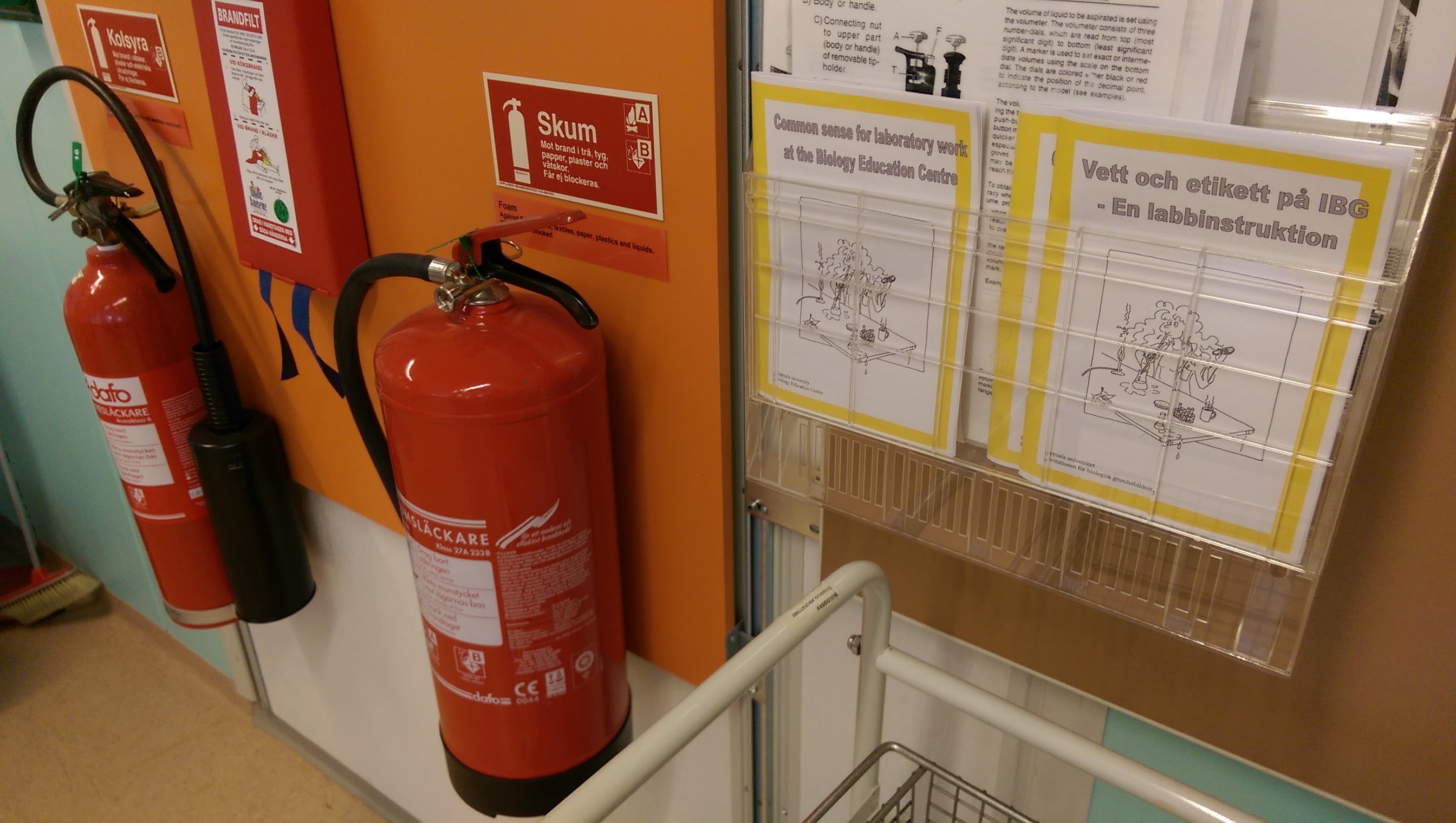 Working in a lab involves many safety concerns. Even if non-pathogenic organisms are used, some of the reagents can be harmful for humans and the environment.

Before starting the work in the lab, the whole team attended a safety demonstration regarding the lab and lab work. The demonstration included, how to handle waste, safety hoods, fire safety, emergency exits. A lab technician was available during the weeks for further support and questions. Since not all team members had previously worked with bacteria or other microorganisms, the more experienced team members taught the others proper sterile technique and how to handle biological samples. The booklet “Common sense for laboratory work” by IBG, Uppsala University was available in the lab for quick referencing.

Our lab was classified as a biosafety level 1 lab. This allowed us to work with non-pathogenic bacteria such as Escherichia coli and common yeast strains such as Saccharomyces cerevisiae. Even if E. coli is non pathogenic to humans, we still took safety seriously. We wiped down all benches with 70% ethanol before and after each procedure. When handling the organisms, we wore lab coats and gloves when needed. To keep bottles of growth media sterile, we used gas burners on the bench. These have the advantage of producing a stream of air upwards, limiting the risk of contaminating open media bottles or Petri dishes. The gas burners were also used to sterilize loops for streaking bacteria and to sterilize glassware at the bench. We used the E. coli strains DH5α, MG1655, BL21(DE3). All of these are BSL-1 organisms. Saccharomyces cerevisiae have been used by humans for thousands of years. Because of this, it is classified as a GRAS-organism (generally regarded as safe) by the FDA. Still we maintained good lab etiquette and treated it with similar safety precaution as we did with E. coli.

Acrylamide - The gel used for SDS-PAGE is made from an acrylamide solution. This compound is toxic and can cause skin and eye irritation, and organ damage after long exposure. It has also been linked to DNA damage and cancer. It should always be handled in a fume hood using nitrile gloves.

SYBR Safe - This compound is used to stain the DNA in agarose gel electrophoresis. While it is much less toxic and a less potent mutagen than Ethylium bromide, it is by no means completely safe to work with. Gloves should always be worn when working with SYBR safe.

Liquid nitrogen - We used liquid nitrogen to snap freeze our freshly made competent cells before placing them in a -70℃ freezer. Liquid nitrogen is very cold and has a low boiling point, which means it has to be handled with care. Since liquid nitrogen expands a lot when it boils, a special thermos has to be used to ensure that gaseous nitrogen can escape. Whenever liquid nitrogen was used, we made sure to use safety goggles, insulating gloves and worked in a well ventilated area.

Nickel Sepharose Fast Flow - Resin used for IMAC loaded with Ni2+ ions is flammable. Keep away from heat and fire. The product contains nickel, which could cause allergic reactions. Avoid spillage to keep the local environment from being contaminated.

PDMS(Sylgard 184) - The elastomer used for making chips is composed of several organic silicate compounds. PDMS is non-toxic below temperatures of 180 ℃, where above it may release formaldehyde vapour and hydrogen gas, but we never went above 120 ℃ while handling PDMS. However protective glasses, gloves and lab coat should always be worn since PDMS is very sticky and can easily stick to clothes or skin, where it is hard to remove and poses a moderate eye hazard. When we spilled it we first wiped with paper, and then rinsed with 2-propanol and water. During work with liquid PDMS we always worked in a fume hood, except when we put the mold inside the laboratory oven. Cured PDMS is also non-toxic and does not have any specific flammability.

Chloroform - Chloroform was used for cleaning PDMS, glass/plexiglass slides and the chip molds, especially directly after receiving the molds or directly after a curing of a new chip. Chloroform is a highly dangerous and volatile substance which evaporates quickly in room temperature, so all work with chloroform was done in a fume hood, with chloroform bottles marked very clearly. Since chloroform can melt vinyl gloves to the skin we used nitrile gloves when handling it. When possible we forwent the use of chloroform in favor of using 2-propanol or ethanol.

During work with microfluidics we used some chemicals for cleaning PDMS, mold, plexiglass and glass slides prior to usage. Chief among these were ethanol and 2-propanol, but we also used chloroform during some parts of the summer. Besides following standard laboratory safety procedures (gloves, glasses, laboratory coat) we also did the majority of our work in a fume hood or in a “clean corner”. In the clean corner the bench was covered in aluminum foil which was changed if something was spilled on it. Furthermore we always left all chemicals related to the creating and curing of the chips inside the fume hood, to prevent any gas leaks to the rest of the laboratory.

CRISPR systems as Cas9 and CPF1 have the ability to digest DNA, making them a possible mutagen. It is however very unlikely to affect humans (or any eukaryote) as the protein would have to get into the nucleus. The protein would have to be transported over the cell membrane. Since it have no localization sequence this is improbable. If CPF1 would end up in the cytoplasma, it would then have to be transported into the nuclei for it to be able to cut in the genome. This is also very unlikely because we did not add a Nuclear Localization Sequence on our protein. As a final safety precaution we blasted our guide RNAs against the human genome before we synthesised them, choosing only sequences that had low or no homology. That way, even if CPF1 was imported into our cells and then into the nucleus, it would have no nuclease activity.