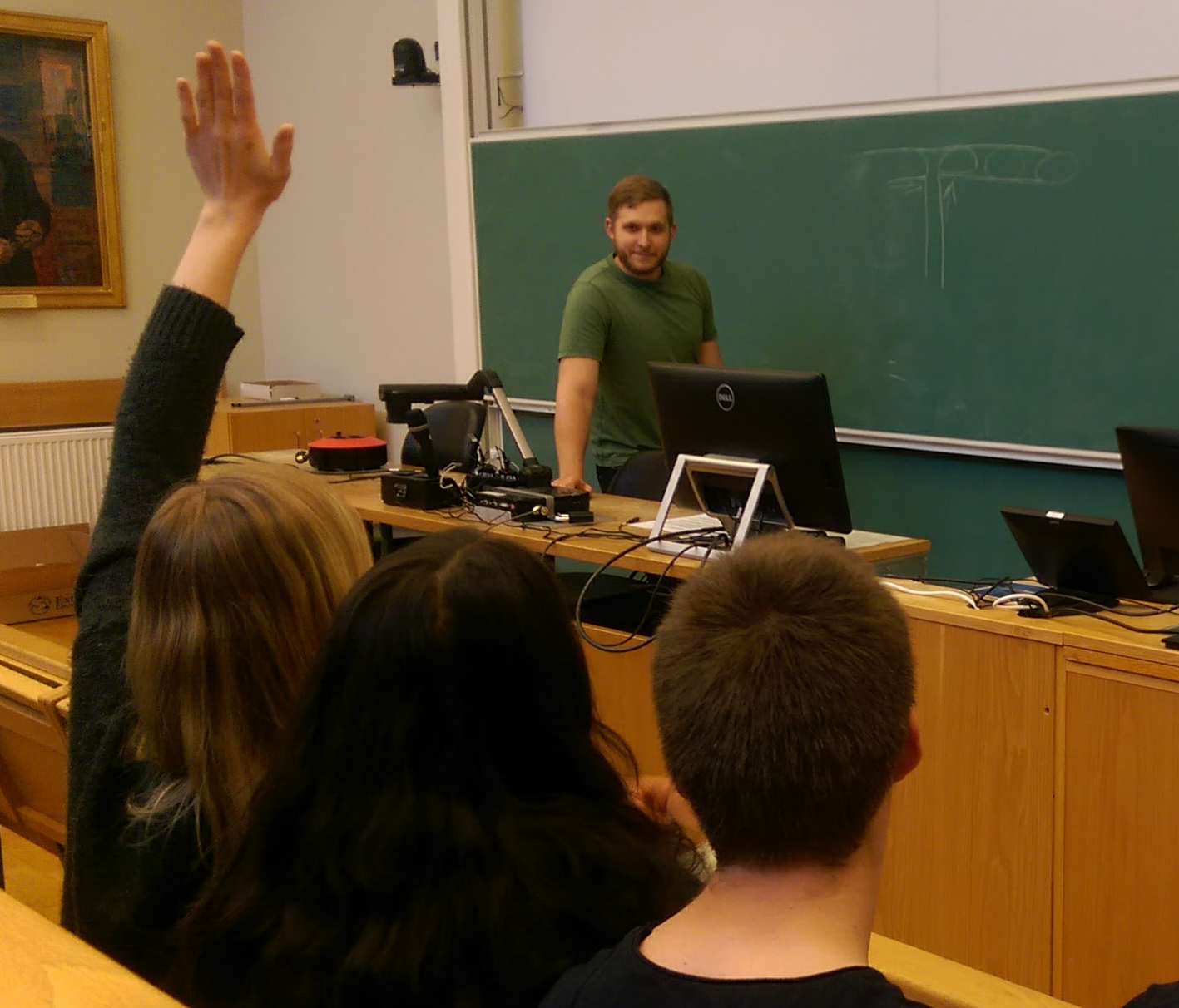 With the purpose of reaching out to different areas of the community and spreading knowledge about synthetic biology, as well as our project, we held presentations at several events and cooperated with the Swedish Makerspace association. Read more by clicking the buttons below were we discuss the importance of sharing information and explain the presentations we held.

Importance of spreading knowledge
Reaching out

Information Transfer to the Public

Uppsala iGEM team 2016 want to encourage scientific information transfer to the public, hence a cooperation have been established with the newly started company, Makerspace.

The definition of a democracy according to Oxford’s dictionary is “the practice or principles of social equality” (www.oxforddictionaries.com, retrieved 13-09-2016). This implies that a society that is considered to have a democratic government shall hold equal information transfer to all members of the society.

Through decades the National Research Council have plunged into issues like how to improve decisions about risks to public health, safety and environmental quality. Several studies have been done by the council that concerns how society can understand and cope with these risks, as well as how contentious decisions about exposure of toxic substances shall be informed to the public. The studies determine what kind of institutional mechanisms that foster a partnership between science and the government (National Research Council, 1983:1).

Improving Risk Communication has had a focus on how to foster the relationship between producers and users of scientific information with the purpose of improving public understanding and thereby obtain a society “with better-informed individual and social choice” (National Research council, 1989:x).

Building Consensus Through Risk Assessment and Management of Department of Energy's Environmental Remediation Program have more recently been looking at nexus between risk assessment and public participation. The study’s main goal was to investigate the “conduct of a credible risk assessment of all the risks at all sites, with active participation of all the local participants”. This was when the department was making restoration after use in the nuclear weapons program (National Council, 1994b:vii). Meanwhile, Science and Judgement in Risk Assessment presented the general issue of establishing as well as, when needed, changing guidelines for assessing human health risks. This was considered from a point of view where there are uncertainties of inadequate knowledge and a requirement of decision makers (National Research Council, 1994a).

National Research Council, 1983:1 formulated the problem as: “The way the nation handles risk often breaks down at the stage of “risk characterization”, when the information in a risk assessment is translated into a form usable by risk manager, individual decision maker, or the public. Oversimplifying the science or skewing the results through selectivity can lead to the inappropriate use of scientific information in risk management decisions, but providing full information, if it does not address key concerns of the intended audience, can undermine that audience’s trust in the risk analysis” (Stern et al. 1996).

The substantive rationale includes that relevant knowledge shall not be apart for only specialists within scientific areas and office holders. It implies that participation of a wide range of groups and individuals shall be provided with fundamental information and insights of contexts with potential risks. Non-specialists shall be able to contribute to risk characterization by e.g. emphasizing questions that have not been addressed by scientists and also give hold of relevant knowledge about certain conditions that could obtain more realistic qualifications for risk analyses. In addition, non-specialists knowledge concur with a balancing factor of social, ethical and political values that cannot entirely be obtained by analytic techniques (Stern et al. 1996).

Mistrust of government decisions is often a basic source to conflicts within the United States (Bella, 1987; Englsh, 1992; Flynn and Slovic, 1993; Kasperson, Golding and Tuler, 1992; Laird, 1989; Pijawka and Mushkatel, 1992; Renn and Levine, 1991; Slovic, Flynn and Layma, 1991; U.S Department of Energy, 1992). Trust becomes fragile since there is a tendency of mass media to highlight bad news, physiological tendencies to notice, believe and underline trust-destroying more than trust-building information. Furthermore, there are specific groups that encourage mistrust in policy debates (Slovic, 1993a). Thus, the instrumental rationale gives weight to those conflicts may decrease and simultaneously acceptance of or trust in decisions by government may increase with participation of a diverse combination of groups and individuals within risk decisions (Stern et al. 1996). Stern et al. 1996 describes this “By providing people an opportunity to learn about the problem, the decision making process, and the expected benefits of a decision may improve the likelihood that they will support the decision” (Peelle, 1979; Peelle et al., 1983; Peelle and Ellis, 1987). Stern et al. 1996 also describes that information transfer to the public does not necessarily have to increase the support for the decision but it could prevent potential misunderstandings of it as well as promote trust for future similar issues.

Scientific statistics in the context of decision-making

The role of science in risk decision-makings is essential. To make proper judgements of understandings around risk decisions, scientific and technical experts contributes with imperative knowledge, methodological characteristics and experience. But partaking of other well needed disciplines are less often pointed out. Risk analyses are as much in need of economic, social, human population migration and fairness units as in need of scientific ones. For example to enable health risks decision-makings concur of individuals and organizations that control or are affected by hazardous substances or processes are essential. Information from outer science units can contribute with knowledge of great importance to the risk decision process, which is why it is important to incorporate these in the scientific framework.

Scientific analyses are not always neutral and objective in all manners either. An analysis in science is often neutral in the sense of not taking part in a dispute and it is often objective in the manner of observations notices so that others shall be able to obtain the same results. But in the sense of framing problems science are not necessarily objective and neutral. For example the risks of indoor pollutants draws attention from the potential comparative risk of the problems from ambient pollutants and analyses of risks of drunk driving that points out driver’s behaviour as a cause of traffic accidents, takes the highlights away from the importance of automobile and highways design (National Research Council, 1996).

In addition, science is not necessarily neutral in its assumptions. Standard statistical assumptions can raise questions according to bias. The null hypothesis is commonly used in risk analysis and its assumptions has biased traits since it puts a higher weight of proof on those who would like to restrict rather than those who would pursue a potential harmful activity (Rosner and Markowitz, 1985; Lilienfeld, 1991). Scientists may also possess a more powerful position to affect risk decisions since certain risks only can be discovered with quantified and highly technical methods. Without transfer of information, non-specialists are more fragile and less able to challenge or confirm the proposals of scientific units.

With these points in mind, science alone cannot provide a completely comprehensive base of decision-making. Science can tell which decision alternative that would give rise to fewest deaths, fewest new cancers and fewest workdays lost to illness etc. But it cannot tell whether it is better with 30 percent of cancer risk to one individual than 15 percent of cancer risk to two individuals. Thus, science cannot obtain information about how effects of scientific results shall be treated in the context of a decision (Stein et al. 1996).

In purpose to encourage and foster information transfer between the scientific platform and the public, Uppsala iGEM team has decided to cooperate with the organization Makerspace. The organization was created by enthusiasts of science in 2012 with the purpose of making knowledge of biosynthetic procedures more accessible for all public units. The project of Uppsala iGEM team 2016 provides an economical profitable pathway of microfluidic-linked procedures, e.g. transformation, which make scientific techniques more accessible at more basic dorms.

In the age of modern science where new discoveries come out around the clock it may be difficult to establish a good connection between the scientific community and the public. The gap of knowledge between researchers and the public may lead to complications and possibly make the public reluctant to trust scientific research. It is therefore very important to try to reduce the gap of knowledge between the groups. A good way of doing this is to have informative events that are attractive to all areas of society. In an effort to reach out to the community and inform others about the endless possibilities within synthetic biology, our team spoke at an event hosted by the board of the Uppsala iGEM community. The event is a yearly lunch conference called SynBio Hour. The first part of the event was a presentation introducing synthetic biology and iGEM. Following that introduction we presented our project. There were over 100 people attending the event and the audience ranged from students with no prior knowledge about synthetic biology to iGEM alumni. We also reached out to the student body at our university by speaking at the annual Student Conference of Science and Technology. This conference is an interdisciplinary event where students from different fields speak about interesting research. We presented iGEM and our project to the audience of over 100 students. Furthermore, we reached out to the biohacker community Makerspace in Stockholm. They were curious about our method of making microfluidic chips so we sent them manuals and guides explaining our method. They also received the CAD designs for our chips. The Makerspace organization provides a basic lab for people that are interested in biology but do not have formal education.

Our various presentations and our collaboration with Makerspace helped us reach out to the community and perhaps helped to make the gap between science and the public a bit smaller.