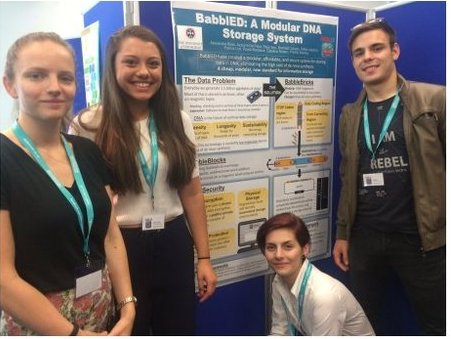 Over the course of our summer we have thoroughly enjoyed being a part of the iGEM community. We were lucky enough to spend almost every day with the Edinburgh University Overgrad Team as we shared a lab, and even luckier to meet so many great teams at the Northern and UK Meet-up.

Babbling about our poster at the UK meet-up in London.

We invited all the Scottish teams + Newcastle to Edinburgh for the Northern Meet-up! Good times, good presentations, and good Pizza!

One of the best things about meeting new teams was discussing ideas with them, and being able to have ideas to help other teams. From this set up a few collaborations: 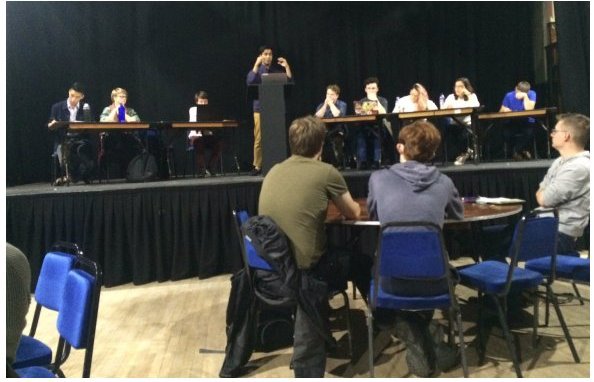 We first met the Dundee undergraduate team over Skype and kept up regular Skype calls for the first few weeks of the summer. During one of our calls they told us about an idea they had for human practices; they thought it would be a good idea to host a public debate on GMO policy. In particular they wanted something that would start a discussion in groups that weren't necessarily scientists. We agreed that this would be a great idea and when they asked us to help them plan it we were more than happy to oblige! We helped the Dundee team set up their debate by contacting our University debate team and getting them involved. Since the Dundee team are working on antimicrobial resistance, and looking at a way to combat it using GM bacteria in feed for farm animals, we worked with our debate team and the Dundee debate team to come up with a motion that would discuss the issues surrounding the project. We settled on the motion "This House Would Ban the Development of GM products". We really feel that this motion reflected the issues that the Dundee team had addressed throughout the course of their project.

We offered to host the debate in Edinburgh and on October 5th the Dundee iGEM and debate teams came down to visit us and have the debate! It was a great success and the debate raised a lot of valid points about the ethics behind GM development. As an example, the team in support of the motion brought up the complex economic consequences farming GMO's can have in developing countries. As both sides of the debate team were constituted of biology and non-biology undergraduate students the arguments that were brought up were very dynamic. The debate definitely brought up some food for thought in the Dundee team and ours! We were also pleased with the audience turn out: there were a lot biology students who may well be working in this field in the future, in addition to non-biology students interested in the topic! The response from them was useful to Dundee iGEM team as part of their human practices.

This summer, the iGEM team at Newcastle had the brilliant idea to research biological alternatives to electrical circuitry. As we’re sure many iGEM teams encounter throughout the course of their project, with the advancement of synthetic biology comes very difficult and abstract questions about ethics and policy. As part of their human practices the Newcastle team wanted to create a ‘thought-experiment’ game to simulate the questions that they had encountered this summer and get people to think differently about their project.

One area where we ran into many difficult questions was during the development of our encryption. During the summer we came up with many scenarios and had to answer difficult questions about why we wanted to incorporate encryption and when it is appropriate. Our own thought process, coupled with Newcastle’s idea for an interactive game gave rise to the perfect collaboration!

We helped Newcastle incorporate an extra ‘level’ to their game by sharing our experiences and conversations with encryption experts. We also shared with them details of our encryption method so that they could use it in their game and even consider it’s use in light of their biological circuitry.

We met the Exeter iGEM team at the UK team meet-up in London. After our presentation they approached us with some interesting questions on the workings of our error correction system - particularly the way in which we worked out our checksum values.

Following up on these conversations we began work on a very fruitful collaboration in which they modelled alternatives to our checksum method in order to try and increase its capacity for error detection. Their findings can be found on our error correction page.