The term InterLab stands for Inter-Laboratory studies. The iGEM InterLab studies conducted during the last two years have been of huge importance to establish a standard for reproducibility of fluorescent measurements. The measurement of fluorescence is an essential tool in synthetic biology. However, the absence of absolute units and standard protocols makes it harder to interpret data and share biological parts between laboratories. The 2016 iGEM InterLab consists of two protocols for measuring GFP that will lead to the creation of absolute units. This collection of measurements can then be used to establish the accuracy with which GFP is measured around the world and what needs to be improved when following a standard protocol. As a team, we decided that the iGEM InterLab was a great opportunity to improve our laboratory skills and take part into an international study.

The aim of the 2016 iGEM InterLab was to quantify the expression of GFP under different promoters and Ribosomal Binding Regions (RBRs). The use of GFP to indirectly measure the expression of a specific protein in cells is a key approach in biology. It enables us to monitor expression levels without killing the cells. The ability measure expression levels per cell is important to be able to quantify strength of promotors. In order to achieve this, population size is indirectly measured using OD600. Expression per cell is then obtained by Fluorescence/OD600.


Both Fluorescence and OD600 are relative measurements, meaning the instruments used and their settings play a crucial role.

To calibrate the instrument and transform relative measurements into absolutes ones, FITC is used as reference material to construct a standard calibration curve for fluorescence. FITC standard is constructed by serial dilution. The resulting FITC curve is used in combination with another FITC standard curve and a GFP standard curve provided by iGEM.

OD600 is a measure of light scattering, therefore light detection is dependent on the physical geometry of the machine. Calibration experiments using a flow cytometer do not involve standard curves. In order to give uniformity to Fluorescence/OD600 data, a standard scattering solution of a mono-dispersed silica suspension (LUDOX) is used.

First the 5 plasmids (Positive Control, Negative Control, Test Device 1, Test Device 2, and Test Device 3) from the InterLab Measurement Kit were transformed into TOP10 competent cells. These were then inoculated into liquid culture and used to do make a MiniPrep. The MiniPrep products were then used for the experiment according to the Plate Reader Protocol. 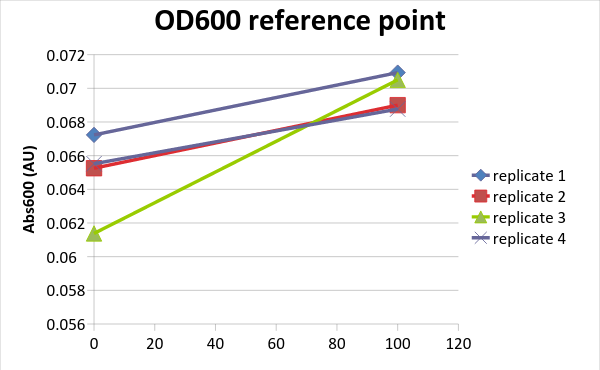 
A 10x dilution of FITC stock solution was diluted in half using 1xPBS following the instructional diagram in the Plate Reader Protocol. A FITC calibration curve was obtained, figure 2. 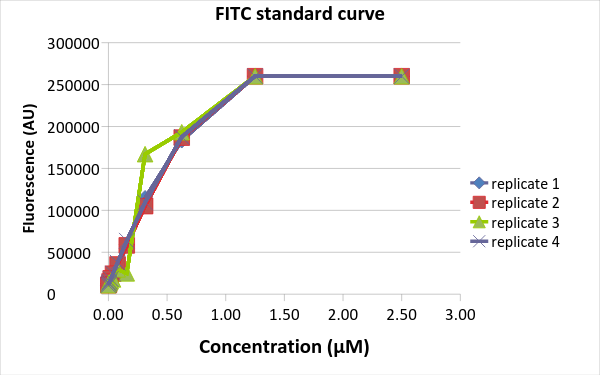 
OD600 of the overnight cultures was measured. Cultures were then diluted with LB medium + chloramphenicol to reach a target OD600 of 0.02. Aliquots of 10 ml of this mixtures were then distributed among the different cultures. 1 ml samples of each device were taken at 0, 1, 2, 3, 4, 5 and 6 hours of incubation at 37ºC and 220 rpm, figure 3. 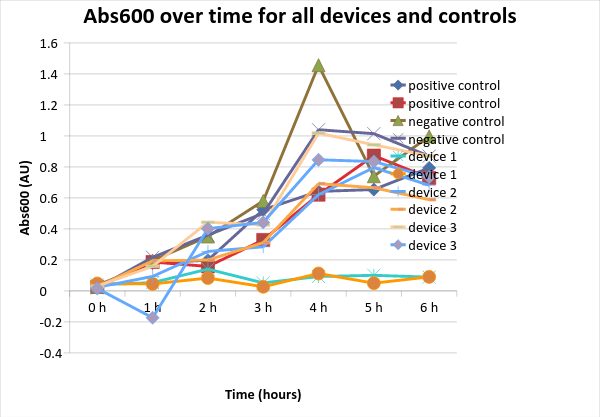 
After the 6 hour incubation period, 100 µl of each sample was pipetted in a 96 well-plate following the instructions of Figure 2 from the Plater Reader Protocol. The samples were measured using a…plate reader utilizing the same setting used to create our FITC standard curve, figure 4. The gain was 1000. 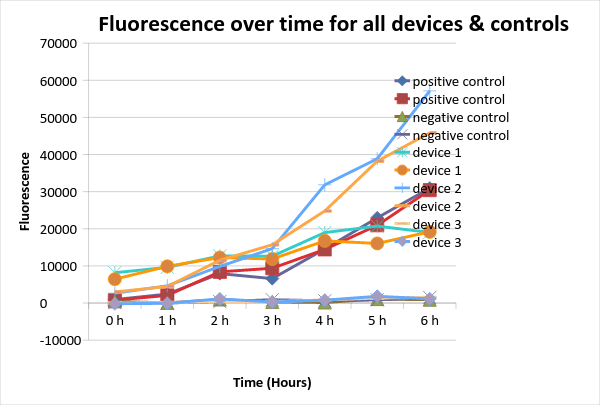 
A ratio of Fluorescence/Abs600 was then calculated for all devices and controls. The Mean and Standard Deviation were calculated for each of the replicates, figure 5. 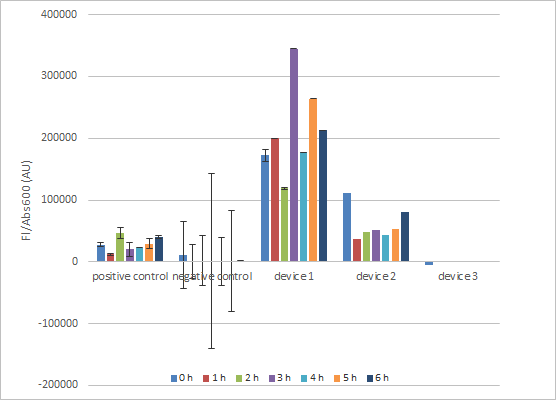 The highest Abs600 registered was observed for the negative controls, meaning that cultures density was higher for the negative controls than the other devices. In order of highest to lowest absorbance; Negative Controls are followed by Positive Controls, Device 3, Device 2 and Device 1, figure 3. A possible explanation for the variations observed might be that, the constitutive promoters and the genes they control, influences the rate of growth of cells. All cultures peak between 4h and 5h.

As shown in figure 4, the highest fluorescence peak was registered for Device 2 replicates. Device 2 was followed by Positive Controls and Device 1. As expected, the Negative Control replicates showed no fluorescence expression, while Device 3 replicates results are close to zero. Although the highest fluorescence peak was observed for device 2 instead of Device 1, figure 5 shows that the average expression per cell is actually higher for Device 1, followed by Device 2, Positive control, Device 3 and Negative Control. These data are in agreement with the relative strengths of these promoters measured by Chris Anderson (Berkeley iGEM team, 2006). The data showed that both the positive and negative control behaved as expected. In particular, as opposed to the 2014 and 2015 iGEM InterLab Studies (Beal et al., 2016), the negative control did not show significant fluctuations.

Although the results seem concurrent with our hypothesis, mistakes may have occurred due to failure in following the protocol. We have therefore decided to make our concerns about the protocol and our suggestions clear by adhering to the extra-credit scheme.

As we were following the protocol, we had concerns about some of the steps. At the very beginning we had a problem using the DNA provided in the kit. The tubes used to store DNA were not resistant to dehydration, therefore, we had to re-suspend our DNA.

During the preparation for the measurement of the OD600 reference point, the protocol did not specify which blank to use for the spectrophotometer. We realise this is because the value for water is to be taken away manually, however modern spectrophotometers do not allow sample measurements without blanking the machine.

We also had some worries about the FITC dilution. It was not clear how to interpret the notation in the protocol and the diagram. Moreover, when measuring the FITC plate we observed very noisy results. However, the dilution procedure was later redesigned and the protocol for the plate reader was changed by the iGEM Head-Quarters. For future studies, it would be better either to not dilute the cells as much as was done or to dilute the FITC stock solution more.

Day 2 of the protocol says to pick up two colonies from each plate without specifying that they are needed as replicates. This was confusing at first, and we nearly inoculated them in the same tube. For future studies, we would recommend to always specify the use of each sample. Although we enjoyed taking part in this international study, a protocol long at least 6 hours is hard to achieve in one day, especially if you have restricted access to the laboratories. Moreover, undergraduates’ laboratories are not always provided with a plate reader. Limited access to the machines can cause students to change the protocol to adapt it to time schedules.

Although there was some little variation, our results show that our test on the promoters using a plate reader is in agreement to Anderson’s characterization. This study demonstrates the stability of Anderson’s promoters in fluorescent experiments. Moreover, the Extra-Credit session enhances the importance of inter-laboratory study for synthetic biology as a tool to improve lab techniques and protocols.

For the page design, we used some features from Edinburgh iGem Team 2015: https://2015.igem.org/Team:Edinburgh/InterLab