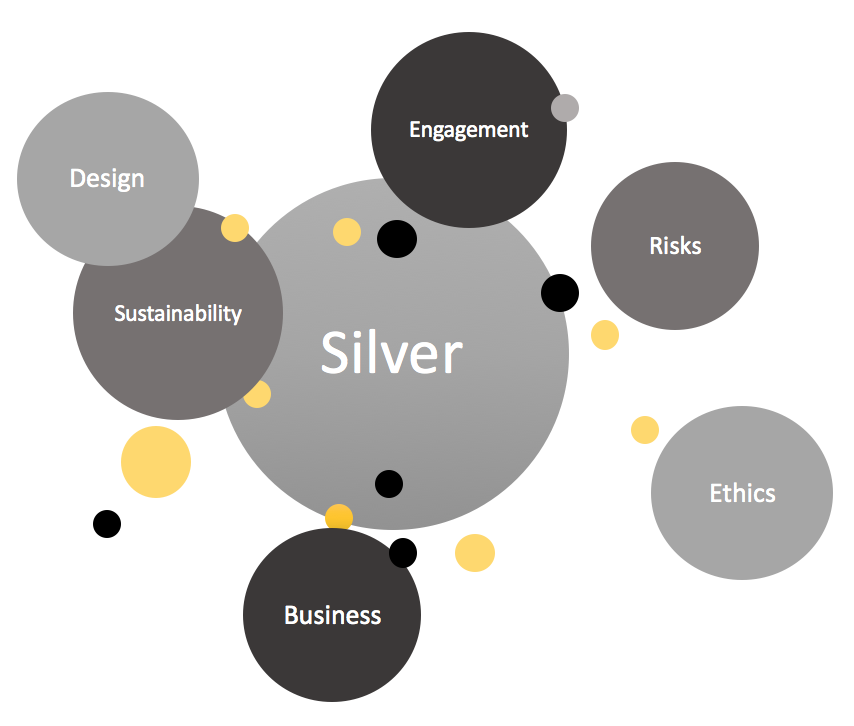 Our project is focused on sustainability. The current practice of mining phosphorus to use for fertilizer is unsustainable in multiple ways. We researched the sustainability of our project online and through meetings with environmental, agricultural, and waste experts such as Dr. Jay Garland from the EPA; Angela Andrews from the City of Lafayette Water Pollution Control; Dr. Terry Semmel from Monsanto; Dr. Craig Stow from the NOAA Great Lakes Environmental Research Lab; and Dr. Sara McMillan from the Purdue ABE Department.

Mining strips land, produces waste, and threatens water supplies (1). Our project would reduce this issue by recycling available phosphorus, reducing the need to mine it.

If no additional collection measures are taken, agricultural demand for phosphorus will eclipse readily available phosphorus supplies within 30 to 40 years and as a result cause agriculture to spread onto new land (2). Our project would reduce this issue by delaying phosphorus shortages and decreasing the need to use new, previously undisturbed land for agriculture. If the phosphorus reclamation module (PRM) was self-sustaining, then modules could be deployed into large bodies of fresh water to gather up more dilute concentrations of phosphorus.

Fourth, current fertilizer application practices result in a large portion of the phosphorus applied to farmlands running off and only about a fifth makes it to the food humans consume (2). Our project may exacerbate this issue, however, by continuing to provide phosphorus fertilizer. However, we feel that the ethical considerations (addressed below) outweigh this. We would attempt to counteract this by partnering with farmers on how to reduce the amount of phosphorus that runs off from fields in the first place. The experience of Dr. Kevin King is that farmers are often open to new, more sustainable methods and are limited by lack of knowledge rather than lack of desire (4). Some methods of reducing nutrient runoff are also economically beneficial to farmers. For example, cover crops can be beneficial to farmers and the environment or a financial and agricultural burden The use of cover crops during the winter is estimated to prevent 6.2 pounds of nitrogen and almost .25 pounds of phosphorus per acre from running off the field (5). Planting cover crops can also decrease the loss of valuable topsoil; improve soil quality; reduce the need for herbicides and pesticides; fix nitrogen; mitigate soil compaction; host beneficial species; and improve tillage conditions. However, the choice of crop is important, and a poorly chosen crop can increase disease and pests in the soil and also cost the farmer for seeding, planting, management, incorporating the cover crop, and possibly planting delays of spring crops (6). As a result, information on how to wisely choose a cover crop is critical.

In order to eliminate the need for electricity to operate floating models of our PRM, solar panels were added to the design.

If our product was implemented on an immense scale, it could theoretically disrupt the mining of phosphorus and the industries around that. However, getting to that scale would require time, and the easily accessible phosphorus is quickly being depleted. Our project also would not collect all phosphorus, even if widely implemented. As a result, our project should not significantly impact current mining jobs. It would continue to provide jobs processing and shipping phosphorus after mined phosphorus levels begin to decline.

Phosphorus fertilizer is required for modern levels of agricultural production. When the quantity of phosphorus available for fertilizer use decreases, prices will start rising. The farmers least able to pay for fertilizer will be hit first. Those farmers and any who rely on food produced by them will start suffering. Farmers will start expanding into new lands, including those that were formerly reserved for wildlife or not used due to unsuitable characteristics such as lack of affordable irrigation. That push for land will result in other negative consequences, such as pressuring vulnerable and endangered species and depleting aquifers previously not economically available. Preventing these consequences is an ethical imperative.

Biocontainment: As with most iGEM projects, biocontainment is a serious risk. Our even more so since the primary use of our technology is directly in the environment we are attempting to protect. Our first line of defense would the build of the phosphorus reclamation module (PRM), the beads used to hold and suspend the bacteria need to be engineered and refined to reduce the risk of leaching (bacteria escaping). Filters would be installed on the input and output flows of the PRM. Both to prevent sediment build up in the filter housing and to prevent bacteria from being released through the output.

Our team has considered the practical and theoretical constraints of a kill switch capable of causing self-destruction if the integrity of the PRM becomes compromised. This killswitch would lower the likelihood that a viable cell could escape the PRM and propagate in the wild. While be believe in reducing the risk of release, cell or colonies do not appear to pose as huge a risk as the engineered system might.

Dual-Use Technology: In the most simple terms, our project takes a resource (Phosphorus in the form of orthophosphate) that is dispersed in the environment and collects it into a highly concentrated form. This allows it to be more useful, removes it from the environment, and increases the value of the concentrated product. However this can pose several obvious risks of abuse.

Calcium phosphate (commonly found in rock deposits), can be mixed with carbon and heated to produce White Phosphorus (also called yellow phosphorus or tetraphosphorus) which was used in smoke, tracer, illumination, and incendiary munitions. There has been debate on whether munitions of this type qualify as incendiary weapons, which are prohibited by Protocol III of the Convention on Certain Conventional Weapons (part of the well known Geneva Convention). While smoke munitions, the most common use of phosphorus, are given an exception for use, the danger still remains that the collected phosphate may be a target for those seeking to do harm.

Our system was designed to collect phosphorus, however we acknowledge that this system can be applied to collect other chemicals or nutrients of interest. Our model could be used to collect herbicides, harmful chemicals, and could be used in consort with other iGEM projects such as the 2013 project of Nanjing or Dundee. As we expand this model to collect other resources the risks will have to be evaluated on a case-by-case basis and modifications to our system should be undertaken to mitigate as many risks as possible.

“Playing God”: As with most iGEM projects, we will surely be accused of “playing God” in our desire to implement a system and assuming we have foreseen and planned for all the outcomes. Obviously this isn’t true, there are serious concerns with a project of this scale, and therefore we propose several questions to further critical examination of our system.

There is the concern that our system will work too well. That it could possibly strip the ecosystem of phosphorus. We apply phosphorus in the form of fertilizer because it can be the limiting nutrient for crop growth. However, if our system overperforms, we may strip enough from the aqueous environment that it may cause detrimental effects to the plants that rely on that environment.

The patents we would issue on our system would be two fold. The first would be patents concerning the genetic pathways to induce luxury phosphorus uptake, store that phosphorus and release it on command. This would allow us to benefit from the retail value of our organism. We would couch this within the unique ability to capture, store, and release compounds from the environment in a more concentrated form allowing the patent to potentially cover more than just phosphorus. The second level of our patents would concern the way these engineered bacteria are housed within the xerogel beads, and the larger phosphorus reclamation module that allows them to uptake luxury amounts of not just phosphorus but other compounds that have increased value when concentrated from the environment.

Our business plan would have three levels to allow flexibility on our part and on the part of those wanting to implement this system. The first level of this model would involve our company directly owning and operating the system. This would allow us to collect the phosphorus to sell without competing interest from a stakeholder. This could be implemented in high phosphorus areas (where phosphorus could be easily collected and resold) or as a pilot program for cities or environmental groups to demonstrate how our system would work. The second level would allow us to rent out the reclamation module along with the organisms to cities, farmers, or homeowners. This would allow these stakeholders to benefit from the collected phosphorus by selling it to us or on the open market. We would be selling replacement parts and packaged bacteria to allow refills once the filters become less efficient. This second level would benefit from those who might not want to directly manage their system but view it as an investment where they can profit from the waste phosphors they may generate or have access to. The third level of our business plan would involve the leasing of the whole system, with propagation and encapsulation methods. This would allow groups to have complete control over the process to fit their specific needs. The phosphorus they accumulate could be sold back to our business for wholesale or could be sold on the open market.

From the outset of our project, we understood that we would receive pushback regarding the use of E. coli in water. Because of this we talked with professors on campus about strategies we could employ to communicate our science. Based on advice we received, we made posters to explain our project and set up a booth at the Wabash River Festival in West Lafayette to discuss the phosphorus problem, our solution, and what it means with people at the festival. We also set up a station for children to pipette water with food coloring into eppendorf tubes to simulate lab experiments. Candy DNA was also provided (that the kids could build). We used this opportunity to explain to both the children and adults how we do genetic recombination.

We wanted to design a system that would be effective and industrially competitive, and so we met with experts from the USDA, Purdue Foundry, and biocontainment experts on campus to establish our design criteria. We iterated on the design through more meetings and ultimately built a prototype