Phosphorus is one of the three essential nutrients for plant growth. Phosphorus is essential in DNA and RNA. It also promotes root proliferation and improves the fruit, forage, vegetable, and grain quality of crops. If soil phosphorus levels are less than 9 ppm, adding phosphorus fertilizer could double yields from 100 to 200 bushels/acre (1). For most of history, fertilizer has been limited to human and animal waste and plant remains or allowing floods to add phosphorus rich sediments to croplands. Nowadays, phosphorus is mined from deposits in rocks in a handful of countries (2). The strip mines to gather phosphorus are “environment wreckers.” They produce approximately 150 millions tons of radioactive “toxic spoil” a year and require “massive draglines, huge slurry pipes, and mountainous spoil heaps.” As a result, the current mines in the United States are challenged by environmentalists concerned about waterways and drinking water supplies and the prospects of future mines are limited (3). The Global Phosphorus Research Initiative estimates that agricultural demand will be larger than the world’s readily available phosphorus supplies within 30 to 40 years. Dana Cordell of the Institute for Sustainable Futures at the University of Technology Sydney and her colleagues in 2009 estimated that the amount of phosphorus that people consume in food is only one-fifth that being mined, suggesting huge amounts simply escape. Recapturing phosphorus lost to field runoff and human and animal waste could greatly aid the phosphorus supply (2).

In order to increase yields, farmers add fertilizer. When they do this for years and the crops do not take up all of the phosphorus, the phosphorus in the soil adds up, as shown in the figure below (4). It is estimated that globally 37 million tons of phosphorus run off into waterways each year (3). 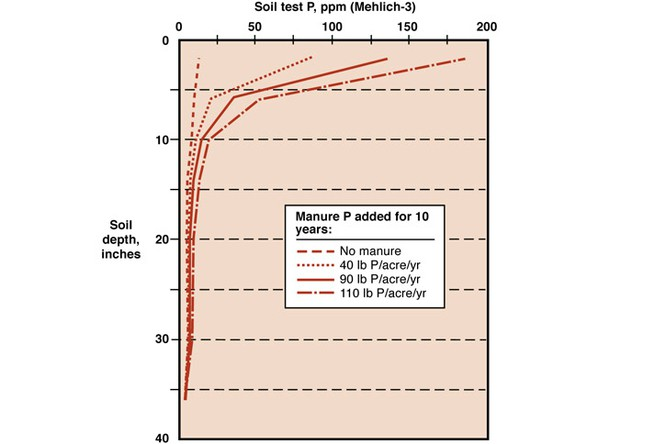 Most environments have limited plant and algal growth due to limiting growth factors. In lakes and other freshwater environments, phosphorus is usually the limiting factor. In estuaries, coastal marine ecosystems, and other saltwater environments, nitrogen is usually the limiting factor (1). Eutrophication is defined by high levels of the limiting growth factor(s) in an environment. The increased levels of the limiting factor prompt excessive plant and algal growth. The excess growth cause algal blooms of algae which can be toxic; tainted drinking water supplies; degradation of recreational opportunities; and hypoxia. The “dead spots” caused by hypoxia often kill marine creatures, including those fishermen rely on for their livelihoods (2). The decrease of water quality restricts water use for fishing, recreation, industry, and drinking (3). The estimated annual cost of damage of eutrophication just to the U.S. is $2.2 billion (2). The EPA identified eutrophication as “the main problem in United States surface waters that have impaired water quality” (3). 55% of river and stream miles and 70% of lake acres in the United States have been classified as impaired by the EPA (4).