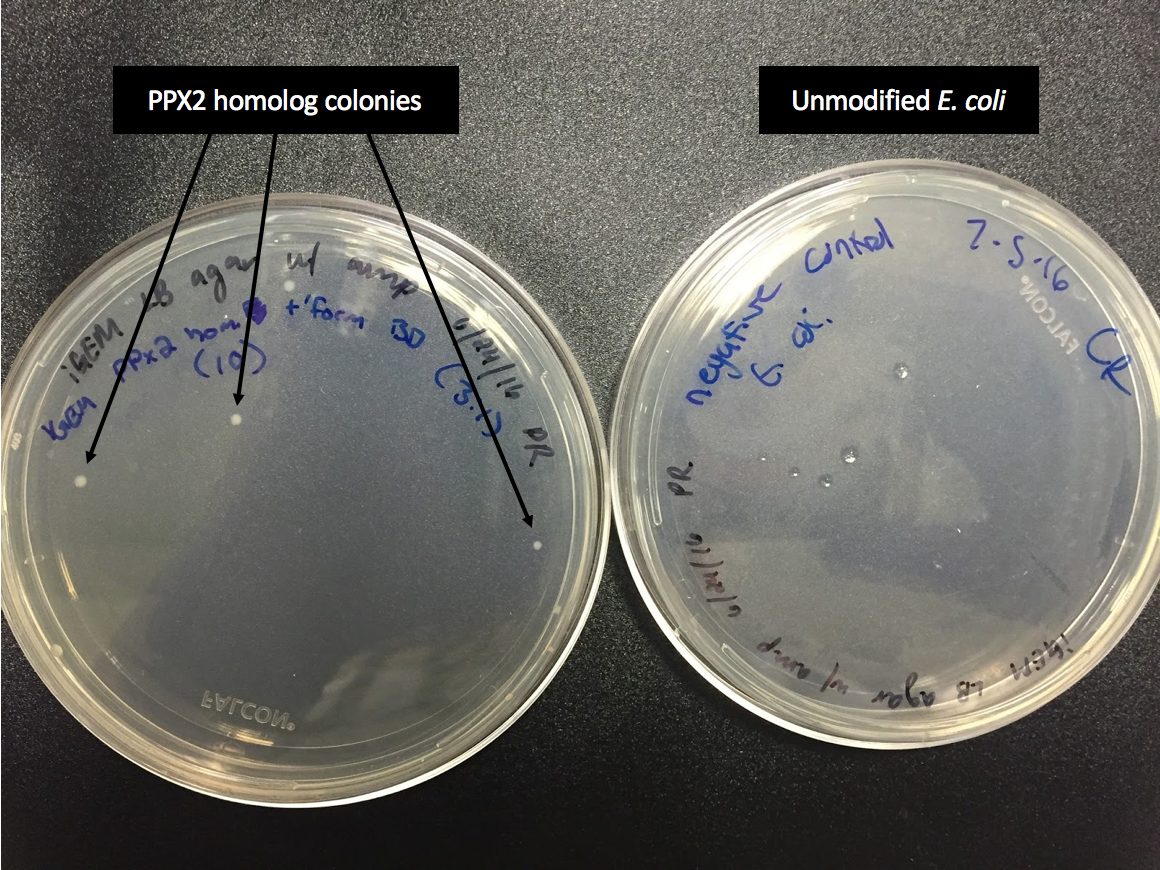 Figure 1: Transformation of PPX2 homolog on PSB1A3 plasmid into E. coli grown on an LB agar plate with ampicillin. 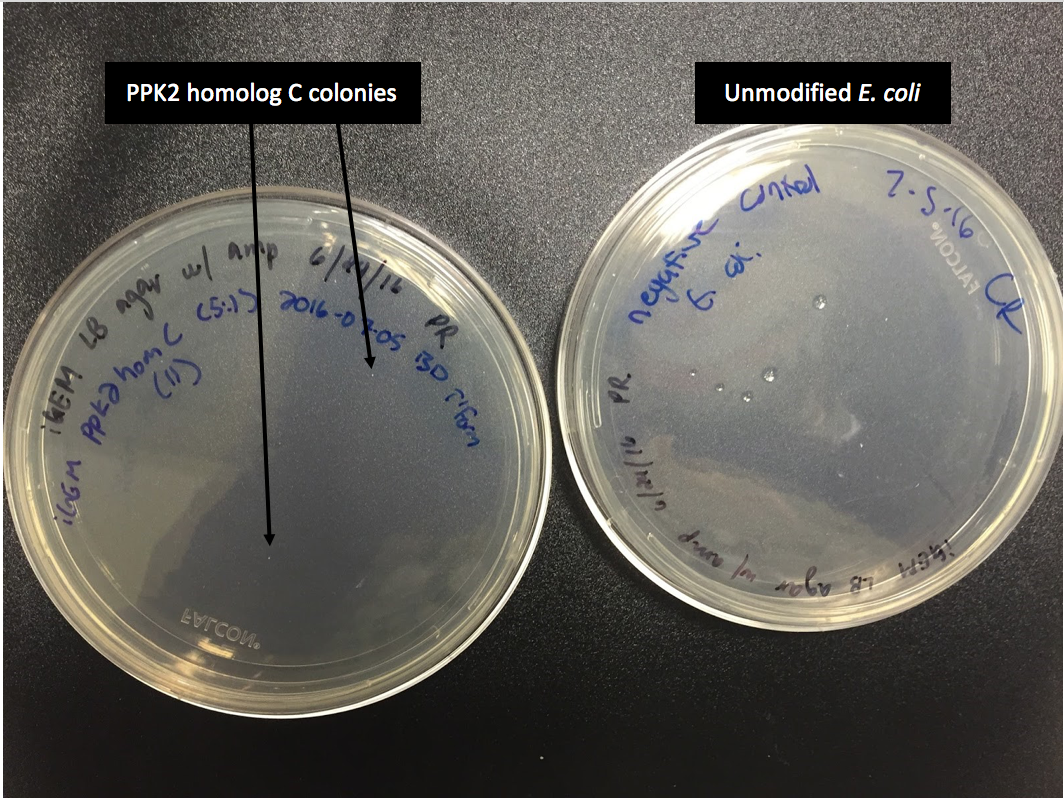 Figure 2: Transformation of PPK2 homolog C on PSB1A3 plasmid into E. coli grown on an LB agar plate with ampicillin.

Figure 1 and Figure 2 demonstrate the growth of modified E. coli on LB agar plates containing ampicillin. This antibiotic was shown to be effective in controlling the growth of bacteria that did not take up the modified plasmid with antibiotic resistance, as no growth was found on the negative control. The success of these transformations, as confirmed through plasmid sequencing, is discussed below.

Plasmid DNA was then obtained for colonies resulting from transformations and brought to the Purdue Genomics Core Facility for low throughput Sanger sequencing.

The sequencing for plasmids in the PSB1A3 backbone were done with a reverse primer that targets the his operon terminator on PSB1A3, and so the reaction should proceed, regardless of whether or not an insert was present in the plasmid. No forward primer was used, as we did not have a forward primer that would work for PSB1A3 at the time of sequencing.

Figure 3.: The results of Sanger sequencing for the transformation of PPK2 homolog C in the plasmid PSB1A3 indicate that PPK2 homolog C plasmid has the correct sequence.

The sequencing for plasmids in the PSB1C3 backbone were done with the standard BioBrick primers VR and VF2. Therefore, a reaction will occur regardless of whether or not an insert is present in the backbone.

Figure 3.b.: The results of Sanger sequencing for the transformations of PPX2 homolog in the plasmid PSB1C3 indicate that the PPX2 homolog contains the correct sequence.

Figure 3.c.: The results of Sanger sequencing for the transformations of PPX2 homolog in the plasmid PSB1A3 indicate that the PPX2 homolog contains the correct sequence. 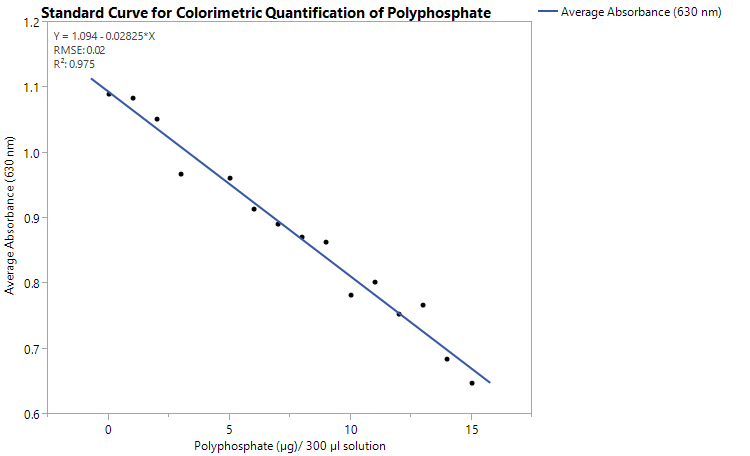 Figure 5A standard curve for amount of phosphate per 300 µl of solution was generated using sodium phosphate glass type 45. The coefficient of determination (R2), at 0.975, is relatively close to 1, which indicates that the linear regression is a suitable equation for estimating the relationship between concentration of polyphosphate and absorbance at 630 nm. The suitability of the linear regression is also supported by the root mean square error, which, at 0.02, is relatively close to 0.

Figure 6: the results indicate that the samples for E. coli containing PPK2 C (both PSB1C3 and PSB1A3), PPX2 (both PSB1C3 and PSB1A3), and PPGK accumulate less polyphosphate than unmodified E. coli, and samples for E. coli containing Pit homolog A and PPGK ATPI accumulate more polyphosphate than the unmodified E. coli.

In the future, we should extract polyphosphate granules from a large sample of unmodified E. coli in order to obtain a normal distribution curve to which our modified samples could be compared.

From the outset of this project, our team recognized the absolute importance of maintaining biosafety both in the lab and in the real-world application of our problem. Although 5-a strains of E. coli like the ones used in our project are non-pathogenic, tests for water contamination are nondiscriminatory as to strain or viability of any bacteria present in water. As such, kill switches alone would not be enough to address concerns around the safe application of our phosphate reclaim modules (bioreactors, buoys, etc.).

Instead we needed a means of isolating our constructs from their treated effluent without sealing our constructs away from treating influent in the first place. To do so we settled upon a technique known as sol-gel immobilization. This technique, in which cells are isolated in highly porous silica matrices (xerogels) through an epoxy-like process allows for the easy diffusion of nutrients into and out of cells without the diffusion of cells from the matrices.

After attempting to isolate unmodified and RFP-expressing E. coli as negative and positive controls respectively, we imaged the two xerogels through fluorescence microscopy and affirmed that yes, in fact, we were able to immobilize E. coli.