We had the amazing opportunity to talk, by proxy, with CSA astronaut Robert Thirsk. An engineer and physician, Robert Thirsk also holds the surprising distinction of being the first person to ever receive a university degree in space (having been given an honorary doctorate degree from his alma mater: The University of Calgary). Dr. Thirsk provided us a look into the life of an astronaut and incredible insight into the space industry and why more people, and governments, should be investing into the projects being developed by their space agencies. A busy individual, Dr. Thirsk responded to one of our questions regarding space exploration. 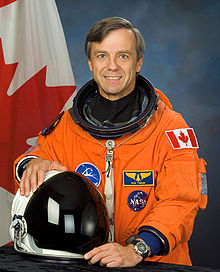 How do you convince taxpayers that spending money on a manned mars mission is their best interest?

Dr. Thirsks: The strongest driver for continued support for space programs is simply economic benefits. The Canadian Space Agency, funded by Canadian taxpayers, makes $3.00 Billion in revenue. Striving for space missions makes economic sense. There is also a trickle down effect, plenty of spin-off technologies comes from innovation in the space industry. For example, MD Robotics developed the Canadarm for use on the International Space Station. Developments from the Canadam include the NeuroArm, a robot designed for neurosurgery, and improvements to modern flight simulators. There is also a utilitarian component. Canada has the second largest land mass in the world, plenty of rural areas lack modern amenities such as internet access and TeleHeathcare. Developments in satellite technology would provide these amenities to people in our northernmost regions, as well as improved remote sensing technology. Successful space missions also inspire the public. If we can achieve the impossible in space, then we can adopt that mindset and face other problems back on earth (climate change, poverty, etc.). Dedicated space programs also educate younger generations and inspire the next generation of leaders. They promote international cooperation and instigate dialogue between countries that wouldn’t normally cooperate. Politics don’t get in the way when there is a common vision globally. I think those are enough reason for the Canadian taxpayer to support our space program, and other developments in the space industry.

We also had a discussion with Christopher Nokes, an Engineering Physics Graduate and Project Manager of Ex-Alta 1, the first cube satellite designed in Alberta. He was kind enough to answer some questions regarding payload delivery among other things. This gave us greater insight into the concerns of rocket scientists when they deal with mission launches, and a greater understanding of our own project within the context of the space industry.

What kind of restraints were in consideration in the design of your system regarding factors like weight and volume?

Mr. Nokes: Ex-Alta 1 was designed according to two primary documents. The first is the CubeSat Design Specification. The second is the QB50 System Requirements (go to qb50.eu and navigate to the Documents tab).

Both these documents have very specific details concerning weight and volume, and I recommend you read them in detail. That said, from our experience with Ex-Alta 1, the critical factor of the two is volume. This is for technical reasons. The satellite must fit within an envelope volume which is non-negotiable. Whereas with the weight, since cubesats most often weigh only a few kilograms, going over the weight limit by even 1 or 2 kg is not a big issue. The rockets launching these cubesats have plenty of contingency to accommodate a few extra grams/kilograms here and there.

You mentioned that the rockets launching cubesats have enough contingency to accommodate a few extra kilograms. However, I'm assuming that the weight restrictions on the design of Ex-Alta 1, albeit flexible, are in place to avoid unexpected extra weight so that the appropriate weight of fuel can be allocated. So, concerning the general economics of the launch, are payloads that are as light as possible favoured in order to keep the costs of launching at a minimum?

There are cases where cubesats are the primary payload, in which case the impact is significant, but this is currently a very, very small fraction of all rocket launches. We will be seeing this more over the next 10 years though.

Regarding our bacteria, in theory, a bioreactor can be seeded with an extremely small volume of culture and since the biomass required for the bacteria could be sourced from the waste of the colonists, there potentially need not be an excess amount of biomass needed to be sent to Mars solely for the bacteria. Considering this, would you say that this possible solution to oxygen production on Mars presents weight-oriented benefits as compared to a chemical method of producing oxygen (where the reactants need to be brought to Mars and become depleted over time) or the electrochemical conversion of Carbon Dioxide with the MOXIE apparatus (which requires high operating temperatures)?

Mr. Nokes: Yes.
That said, I don’t know much about all the different methods of generating oxygen from other compounds, so my agreement is based solely on what you have told me: that your bioreactor solution uses matter that can be found in situ, or that is a byproduct of a process that will be on Mars when humans go there. In this case, the process is human digestion and the by-product is human excrement.
The thing to note is that we are entering the commercial space age. This means that there is an explosion in options for getting into space, and that will drive launch costs down in such a way that groups like yours can focus entirely on getting your process right and maximizing it’s efficiency, durability, and functionality, without worrying too much about mass constraints.
I’m not saying mass constraints will disappear. Your system will still need to be optimized for mass. However, that won’t be the primary objective. The primary objective is that it works, and that it does the job it was designed to do in the most efficient way possible.
Also, kudos for working on a process that involves handling fecal matter. I feel human excrement is an extremely undervalued resource. ;)

To our surprise, Mr. Nokes actually had a colleague, Mr. Charles Ross, who had participated in a Martian mission simulation, called HI-SEAS. We were lucky to also ask him a few question regarding his contribution to this simulation, and about the conditions needed for sustained living on Mars and his responses are featured below.

Which Martian Simulation study were you part of? HI-SEAS?

Mr. Ross: Yes, I was part of the HI-SEAS Mars simulation. I participated as a crew member on the second overall mission, which was considered the first in a series of three psychological studies. Our mission was 120-days, or 4-months long, and the following two missions in the series were 240 and 360 days respectively. HI-SEAS stands for the Hawaii Space Exploration Analog and Simulation, and is operated by the University of Hawaii with funding from major sources like NASA.

What role did you play in the simulation?

Mr. Ross: My role during the mission was the “Systems and Communications Specialist”. However, the roles were not determined prior to the study, so we had the choice of title based on the responsibilities we managed during the mission. Since my background was in experimental physics, I was immediately learning about the automated systems and “life support” equipment that we used in the field. Having a background understanding of Linux and the Mac operating systems were also assets that I had that other crew members didn’t. Ultimately, I became the crew contact for our ground controllers for all of the off-the-grid systems that we used.

What key results and factors was the simulation focused on or analyzing?

Mr. Ross: This mission was focused on the psychological challenges facing astronauts on long-duration space missions. We focussed on simulating a 4-month ground simulation, but many of the lessons are translatable to other highly-isolated outposts (including Antarctica). As a result, we were responsible for divulging a lot of emotional information through surveys, keyword mining AI’s, and other psychologically relevant tests. We also wore biometric devices to measure things like our pulse, skin conductivity, ambient noise volumes, and proximity to other crew. We also routinely gave saliva samples as a means of measuring our stress levels through the hormone cortisol.

Was the conservation and recycling of resources an important consideration in making this simulation a comparable analog to a real Martian mission? How critical is sustainability in a future manned Mars mission?

Mr. Ross: Yes, in fact, we had a resident expert on our crew from NASA. Annie Caraccio is a chemical engineer working at NASA’s Kennedy Space Center, on materials reclamation and waste management problems. All of the waste we generated was sorted and weighed throughout the mission in order to ascertain what typical loads on waste systems might be (at the very least it’s a good baseline to target and improve). Ultimately our success on long-duration missions will be directly related to the life support systems that we bring with us, with a closed-loop system representing a pinnacle of achievement.

These responses from these distinguished men were very helpful in guiding our team in our exploration of our project. They gave us insight into what aspects and factors need to be considered, from the economic to the social aspects, when tackling a future problem towards prospective manned Mars missions. Ultimately, we could not have developed and understood the implications of our research without having reached out to these experts.