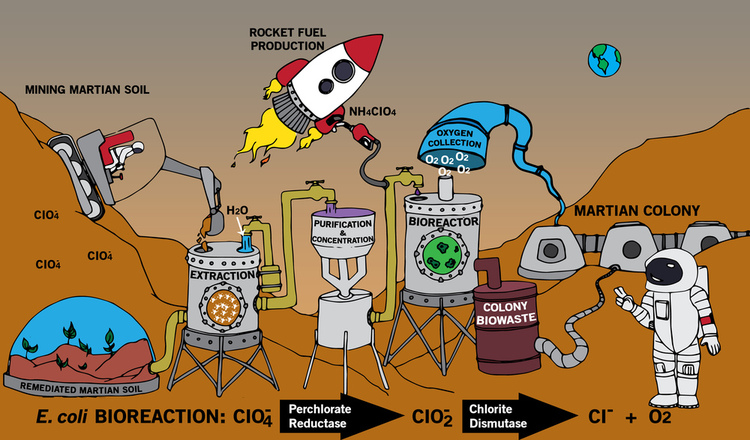 Depicted above is our team's rendition of a hypothetical process of converting perchlorate into the oxygen gas, which you can see, would be fed towards the Martian Colony. It starts with a methodology for mining and extracting perchlorate. Then, the extracted perchlorate ions are purified and concentrated to be used in a bioreactor.Next comes the bioconversion of perchlorate into oxygen in a bioreactor containing genetically-engineered micro-organisms which have the Ideonella dechloratans perchlorate reducing metabolic pathway.This oxygen is then captured, transferred and made available to an enclosed Martian colony. The colonial biowaste could also be used as a feedstock for the bioreactor, as well as in tandem with the newly remediated martian soil to grow produce, closing one of the loops in this process.

Though the focus of this project is of the bioreaction of Chlorite Dismutase and chlorite ions, our team also explored two other components of the perchlorate conversion process: Perchlorate Extraction and Concentration, and Recycling Media.