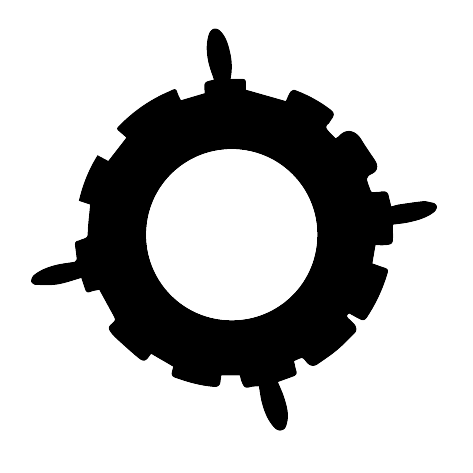 Light Control
we did co-transformation for the red light and green light system separately. the bacteria after co-transformation were irradiated by red or green light in our device, and we use sfGFP as reporter gene. By monitoring relative intensity of fluorescence, we could prove the system’s feasibility. Following is the result observed by multiple plate reader. 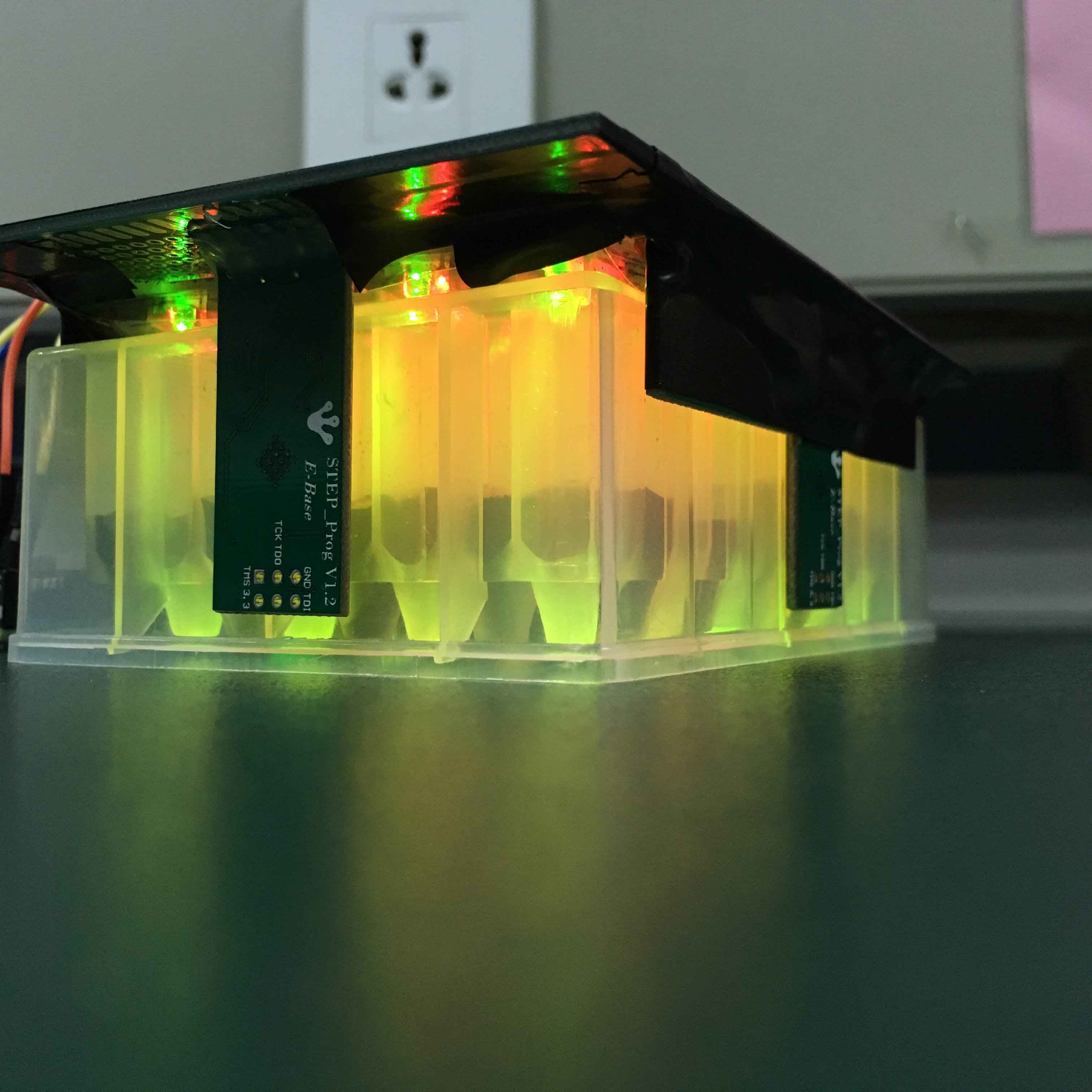 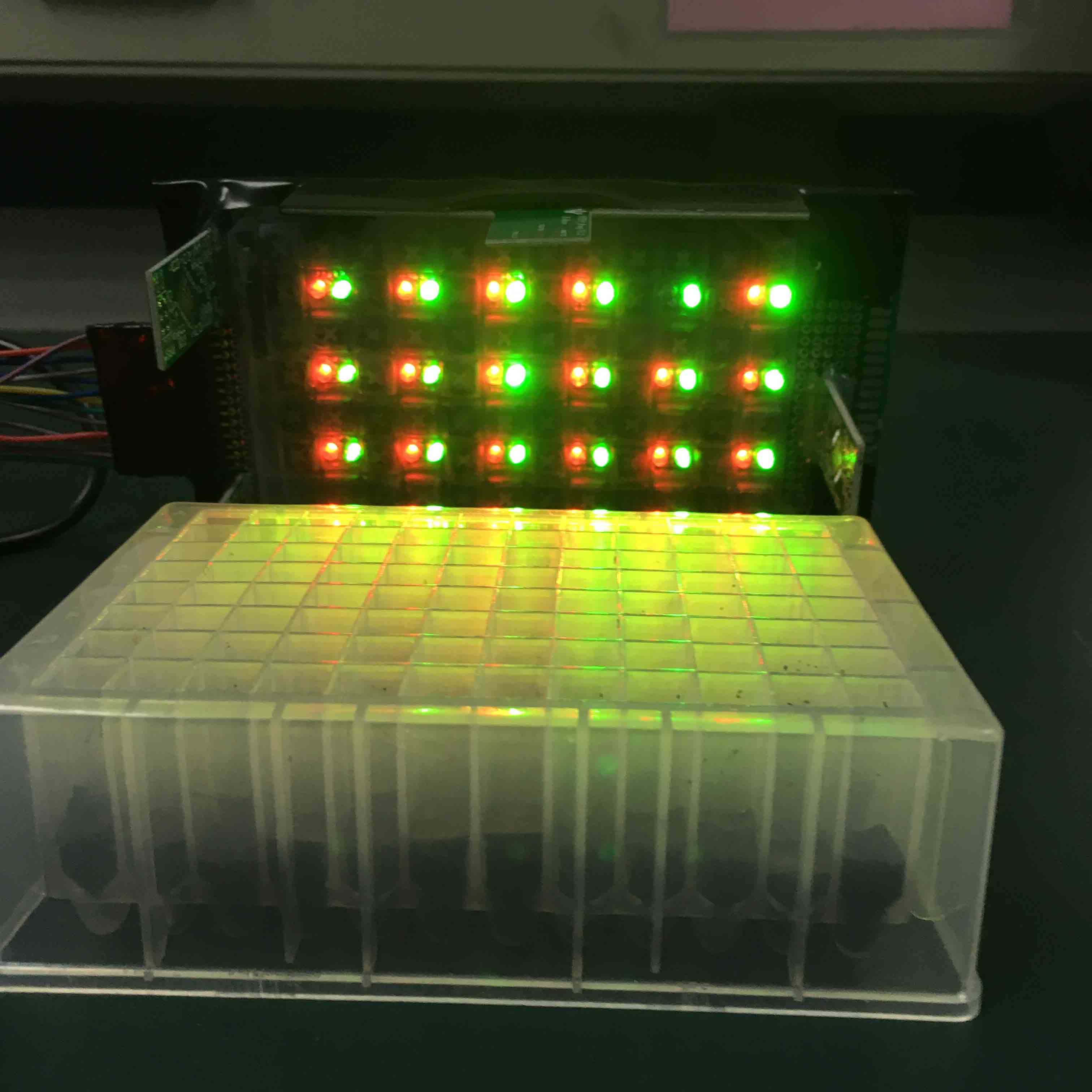 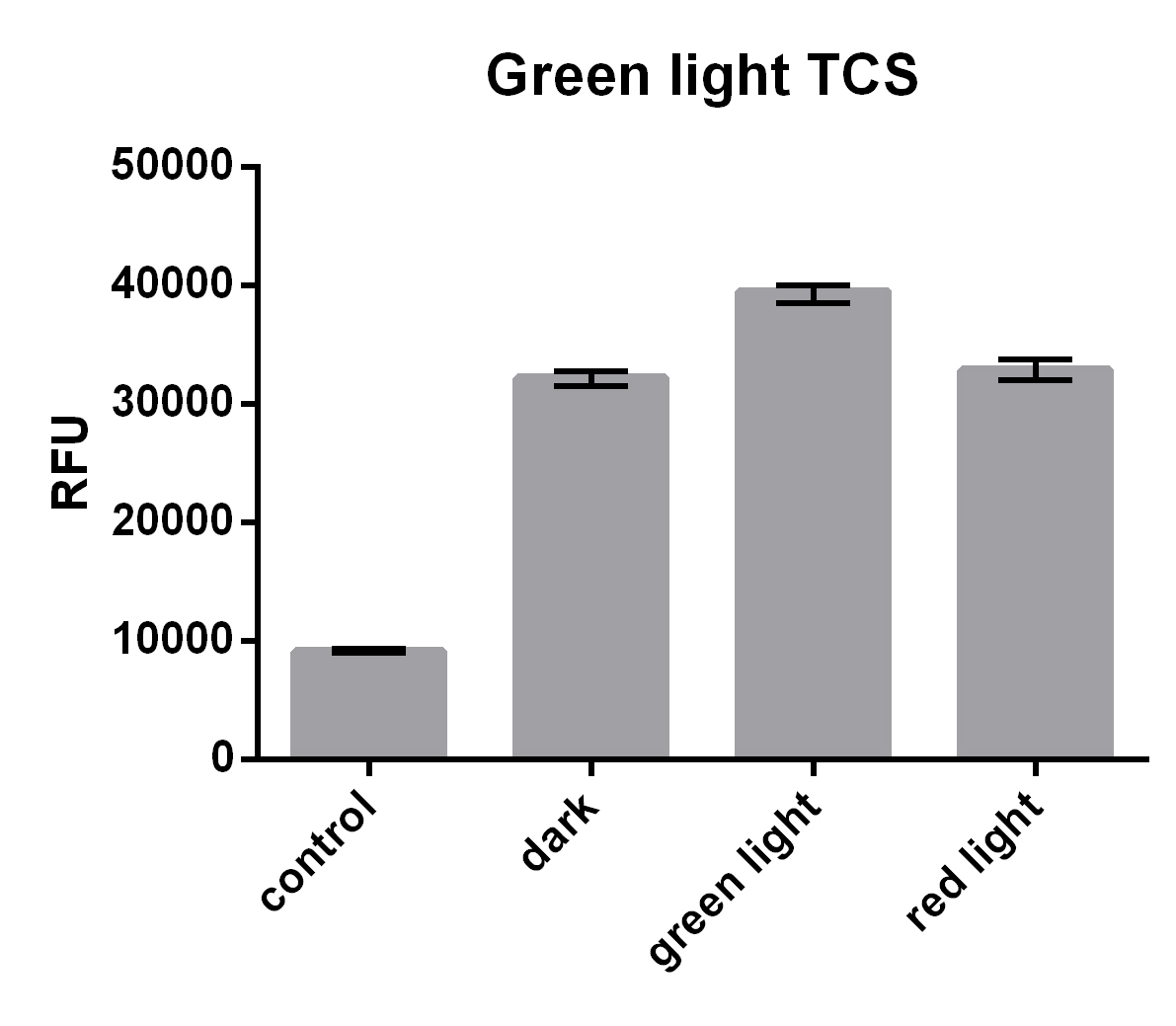 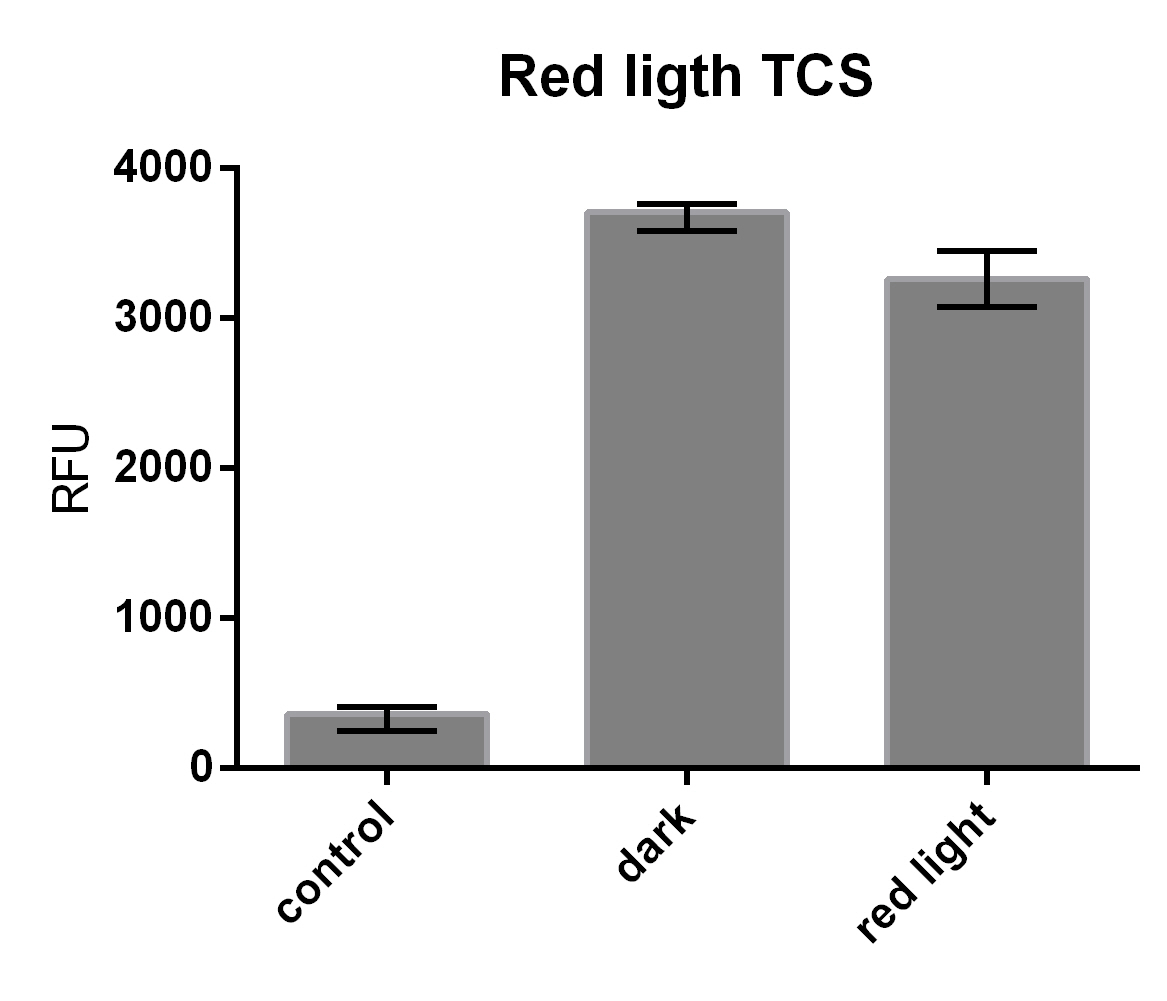 We measured the fluorescent intensity of sfGFP to show that whether the TCSs can be activated or inhibited after being irradiated by the light around specific wave length long. After being irradiated 8 hours, although We can easily to find that both green and red TCSs have a great leak compared to control, but we can still observed that the activated group expressed about 20% sfGFP more than the dark one. But in red-TCS(haven’t combined with NOT gate) which is activated by darkness, there’s only about 15% enhancing compared with the group inhibited by red light.     In addition, to realize the second generation of cipher machine, we need to ensure that the light control system could be coupled with the oscillation system. That is to say, the response time of the light control system must be shorter than half period of the oscillation. Thus, we measured the system’s response time. Following is the results: 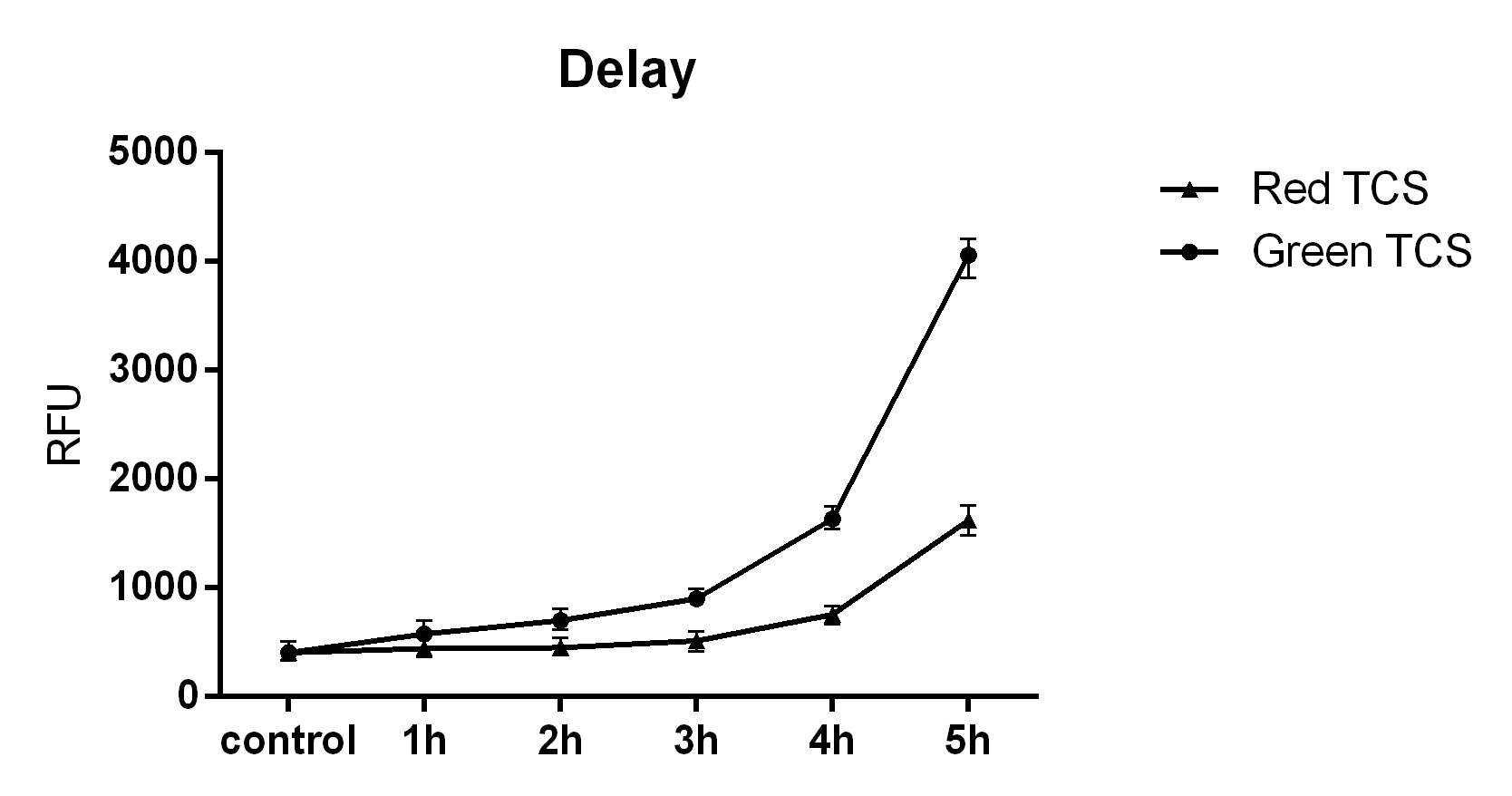 We can tell that in the first three hours, the fluorescent intensities of both two TCSs are quite low but they begin to grow rapidly after three hours. And after more than four to five hours, the fluorescent intensity has grown several times than the initials. The intensity of green-TCS grows 3 times while the red-TCS grows one time in four hours and in five hours the multiples have become 10 and 4 in the two systems. We can easily tell that compared with red-TCS, the green one can be activated faster and better which indicates green one can be more steady and reliable.     Conclusion: After a series of experiment, we are able to prove the feasibility of the light-induced system. While there is a possibility of leak, the differences between the two groups can be measured by devices. Ayle=""lso, after our measurement of the response time about 3 hours, it falls within the oscillation’s regulating range, which is consistent with our modeling results. So far, we can prove that the concept of the second generation of cipher machine is correct.
(Related parts: BBa_K1886003; BBa_K1886004; BBa_K1886005; BBa_K1886006)
Oscillation
In order to realize the single-period oscillation, we design a circuit based on negative feedback mechanism (fig1), which is composed of gene luxI，aiiA and sfGFP. 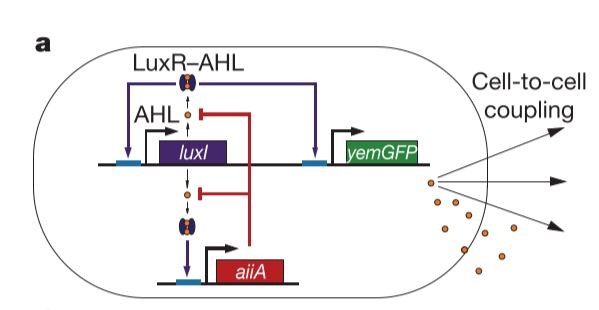 Danino T, Mondr6agón-Palomino O, Tsimring L, et al. A synchronized quorum of genetic clocks[J]. Nature, 2010, 463(7279): 326-330.
To prove the effect of this circuit, we implanted it in E.coli MG1655 and raised them in test tubes. Meanwhile, we monitored the change of GFP fluorescence intensity. Although we could observe oscillation, amplitude rose higher and higher. After analysis, we think this happened due to the increased bacteria population and thus, the resulting increased AHL accumulated in the medium.     To get a stable oscillation, we designed a microfluidics device based on our project. In practice, we add bacteria solution to microfluidics chips, so each chamber is distributed with bacteria. Then, we add fresh medium with an appropriate velocity continuously, to provide adequate nutrition and take away the excessive bacteria due to proliferation and the accumulated AHL. By now, we ensure the system’s stability. We use fluorescence microscope to take pictures every 5 minutes and observe the stable oscillation. (Shown in the figures below:) 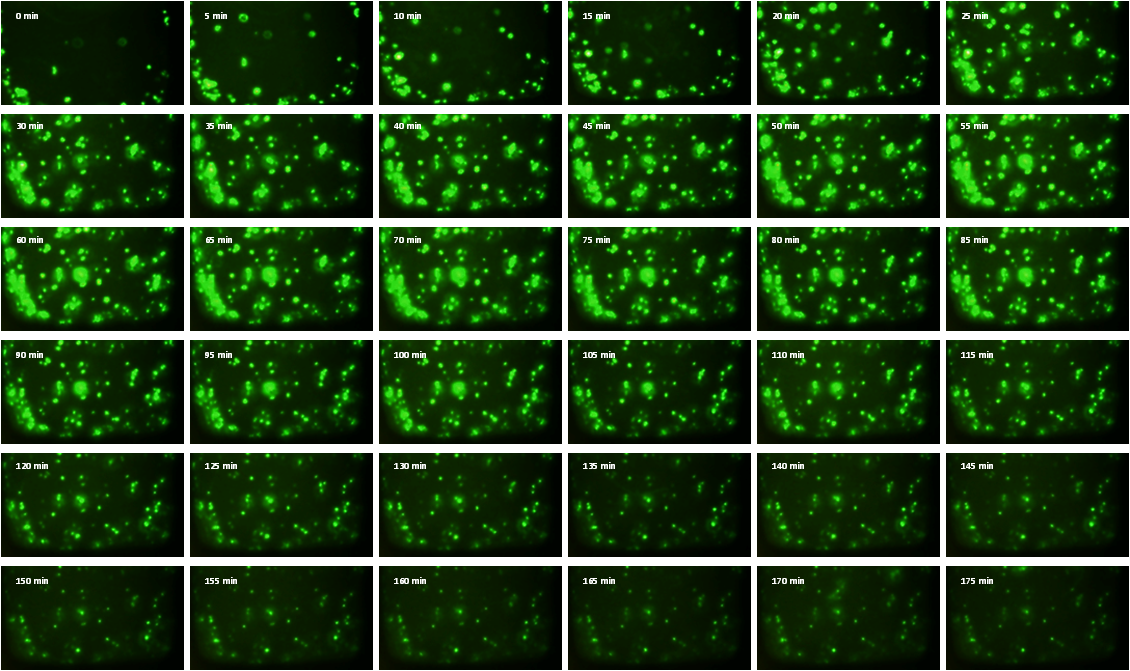 (Related parts: BBa_K1886000; BBa_K1886001; BBa_K1886002)
Logic gate
For proving our feasibility of AND gate, we used lactose promoter and arabinose promoter as the inputs of AND gate, and used GFP as the reporter gene. We designed a series of experiments to verify its precision and did research about its response time and response concentration.     First, we did four parallel experiments: the bacteria solutions were added by IPTG of 10^-4mol/L, arabinose of 10^-3mol/L, both of them, and neither of them. Following is the result.

As is shown in the figure, solutions with no inducers or only one inducer can produce little GFP fluorescence which verify the precision and feasibility of the AND gate. But, GFP fluorescence is high when only adding IPTG. This may because the leak of Pbad. Considering the principle of AND gate, it is reasonable. Only the protein T7ptag can activate the gene controlled by T7 promoter, though T7ptag has two amber mutations, some E.coli endogenous tRNA may also identify the stop codon, which causes the leaking of Pbad seemingly.         Next, we designed experiments to verify the response concentration. Through these experiments, we can also conclude under which concentration can the AND gate have the best effect. We designed a series of gradient about how many inducers should be added. The concentration of IPTG and arabinose varied from 10^-3, 10^-4, 10^-5, 10^-6, to 0. Following is the result. 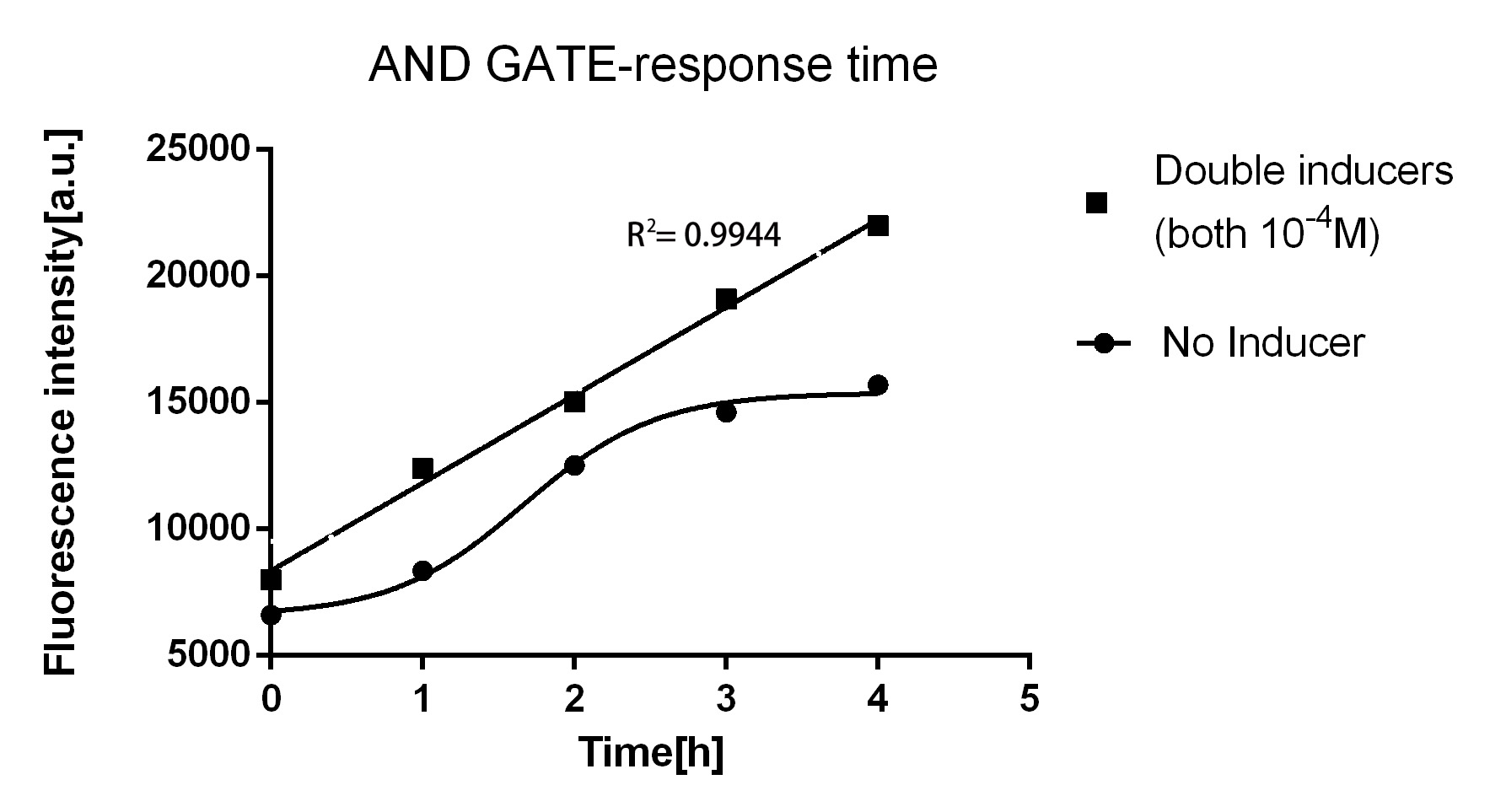 We measured the sample every certain period after adding inducers, and make the response curves in the figure. We found that after adding arabinose and IPTG, the fluorescence intensity satisfies a linear growth curve. However, the fluorescence intensity of the group with no inducers flattens after 2 hours. The difference of fluorescence intensity between two groups becomes apparent after 2 hours. Thus, we estimate that the response time of logic gate is around 2 hours.         In general, we have verified the feasibility of logic gate. We successfully simplify the three-plasmid system based on our reference, and obtain a good result. After adding two inducers, fluorescence value changed apparently. Its response time is around 2 hours. After coupling with the light-induced system, the overall response time can be matched up with the oscillation period.
(Related parts: BBa_K1886007; BBa_K1886008; BBa_K1886009; BBa_K18860016)
Contact Us Room 413,Biology lab center, Zijingang Campus Zhejiang University, YuHangTang Road NO.866 Hangzhou, China
iGEM ZJU-China 2016 Team
igem_zjuchina_2016@outlook.com