Alzheimer’s disease (AD), named from a Germany neurological doctor, is the most common cause of dementia in the elderly, and a progressive and fatal neurodegenerative disorder. Epidemiological studies suggest that 11% of those aged 65 years and older, and almost one third of those 85 and older, have some form of the disease. It showed that over 46 million people worldwide are living with dementia in 2015. This number will almost double every 20 years. Every 3 seconds, there will be a new dementia victim appear. And this number will reach epidemic proportions (131.5 million) by the year 2050. Dementia also has a huge economic impact. Today, the total estimated worldwide cost of dementia in 2015 is US$ 818 billion. By 2018, dementia will become a trillion dollar disease, rising to US$ 2 trillion by 2030. This means that if dementia care were a country, it would be the world’s 18th largest economy, more than the market values of companies such as Apple (US$ 742 billion), Google (US$ 368 billion) and Exxon (US$ 357 billion). 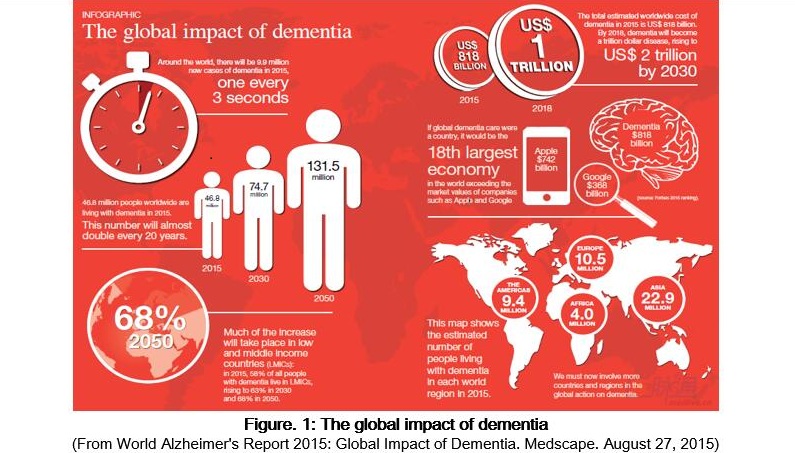 AD is characterized by progressive loss of synapses and neurons in the hippocampus and cortex which is associated with gradual decline in short-term memory and cognitive functions. In molecular levels, AD is characterized by extracellular sedimention of insoluble amyloid beta peptide (Aβ) to form plaques (senile plaques, SPs), and aggregation of highly phosphorylated Tau protein from microtubules dissociation to form nerve fiber entanglement (neurofibrillary tangles, NFTs), which is closely related to cognitive impairment. AD is influenced by many factors, its pathogenesis is very complex. There are a lot of theories about the AD causes, such as oxidative stress, free radical damage, Aβ cascade hypothesis, cholinergic theory, theory of Tau protein, calcium metabolic disorders, etc. Aβ cascade hypothesis and theory of the Tau protein are attended by the researchers.

3. Clinical diagnosis and treatment of AD:

Clinical symptoms of AD are mainly characterized by memory loss, language disorders, cognitive and judgment ability decreasing, emotion and personality changing, etc. AD onset is dormant without any signs of the nervous system changing. Diagnosis is mainly based on MMSE (Mini-Mental State Examination), imaging and biomarker detection. MMSE is a simple aoetic test which is easily affected by the achieved education level of potential patient. Also this is not accurate enough because it can only differ the people who has cognitive impairment. The major imaging techniques are computed tomography (CT) and magnetic resonance imaging (MRI). CT can be used for observation cortical atrophy and the sulci widened, but it can’t accurately show the hippocampus shrinking which is the main injury of AD. MRI can clearly show the changes of olfactory region, hippocampus, and the structure of the gray and white matter, which is superior to CT. However, on the image interpretation and quantitative assay, MRI still has some defects and limitations. On the other hand, people have been trying to look for biomarkers of AD from blood, urine and other body fluids. Early researches showed that, Aβ and phosphorylated Tau in cerebrospinal fluid (CSF) were considered to be early markers of AD, which is more accurate and effective. But in the actual clinical work, the potential patients without any AD symptoms generally don't agree to accept this examination because of the traumatic CSF acquisition. So it is very big obstacle to be applied to clinic. 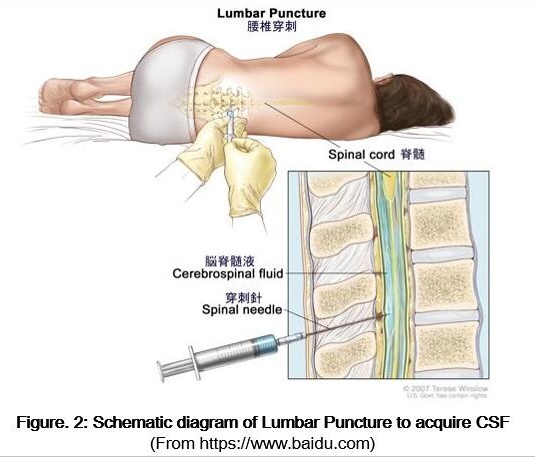 In terms of AD drug treatment, there is no specific drug can prevent and reverse disease. All the drugs used can only delay the process of disease progression, not to modify disease course. Common drugs are cholinesterase inhibitor, N - methyl - D - aspartate (NMDA) receptor antagonist and antioxidants. Currently cholinesterase inhibitors approved by FDA includes Aricept, Tacrine, Donepezil, Galantamine and Rivastigmine. Memantine Hydrochloride is the only non competition NMDA receptor antagonist in clinic.


In summary, Although AD is a serious public health challenge, current diagnosis and treatment strategies are very limited for AD patient. Therefore, researching for new diagnosis and treatment targets that address multiple different facets of AD phenotype and related pathophysiology must be active sought to help addressing this problem.

4. miRNAs are hoped to be applied for AD diagnosis

As we can see, currently diagnosis of AD is based primarily on analysis of the patient’s cognitive function. There is an urgent need to develop better AD biomarkers and non-invasive diagnostic methods for early detection and treatment monitoring. microRNAs (miRNA) are small nonprotein-coding RNAs that post-transcriptionally regulate the expression of protein-coding genes and are very stable in a variety of body fluids. Altered expression of miRNAs in many disease states, including AD, and increasing relevance of miRNAs in blood circulation in different pathologies have prompted the study of their possible application as neurodegenerative diseases biomarkers in order to identify new diagnositic and therapeutic targets. Current research has already found that the fold change of specific kinds of miRNAs have correlations with AD, such as miRNA-34c and miRNA-34a. To improve the diagnosis method, we are developing a rapid and simple diagnosis for AD using the different expression of microRNA between patients and healthy controls, which is promising to be applied in clinic in future 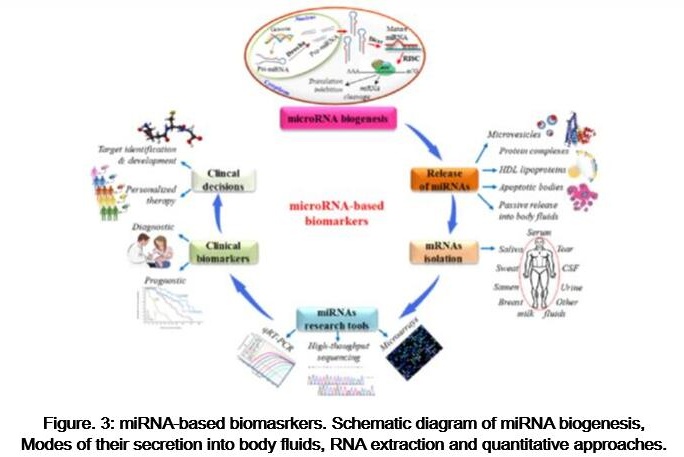