In this part, we will describe some works we finished about testing the functions of the parts in the past few years.

In Device 2.0, we predicted that in the foundation of Device 1.0, we want to achieve the positive relationship of the fluorescent intensity and the concentration of miRNA by adding a NOT gate in the form of "repressor-promoter". Nonetheless, what is the dynamics influences and the intensity of the NOT gate? What is the best initial concentration of the repressor? These data is still unknown. Hence, we started our journey of exploration. At the same time, we considered that for this particular repressor, the effects on the inducer are more significant, especially the response effects of different quantity of repressors (controlled by promoters that has different intensity) under different concentrations of inducers in steady state and the dynamics processing. The induced degree is up to the response effect in a steady state and the speed of the effect depends on the dynamic process, these 2 points are very essential in logic gate. There are many elements in the parts registry. We chose the most common 2--tetR and lacl--as the NOT gate of our Device 2.0. Therefore we test the dynamic process of different quantity of the repressor and different concentration of inducer. After that we did the steady-state analysis and the dynamic analysis. In the end we wish that it can be a reference method for the function of logic gate circuit for the future team to describe their elements' function.

First of all, we need to determine the two NOT gate circuits, tetR-Ptet and lacI-Plac, at the same time, also control the concentration of each repressor, we use the composition of different concentrations of promoter strength promoter that we have to control the repressor protein. Based on the above ideas, we build a total of 10 genetic circuits. 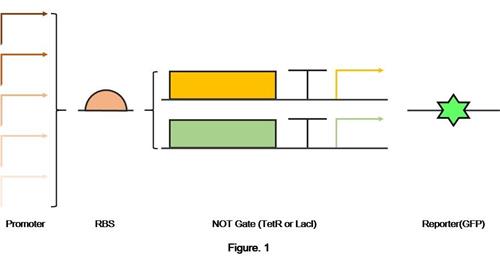 2. Building the plasmids and measurement of the data

3.1 Response of the NOT gate circuit to the inducer.

We measured the real-time dynamic response of every different circuit under their inducer . 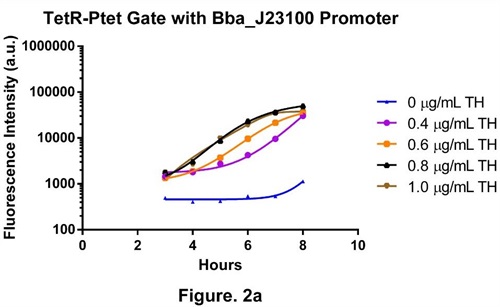 The fluorescent intensity increases significantly after the inducer is added, which suggests that the effect of the repressor is restrained by the inhibitor and the gene of GFP can be expressed.

3.2 The response dynamics is affected by repressor's concentration.

With difference of promoter strength, we figured out that there is a relationship between the concentration of the repressor and the response dynamics and it was showed in the length of response time 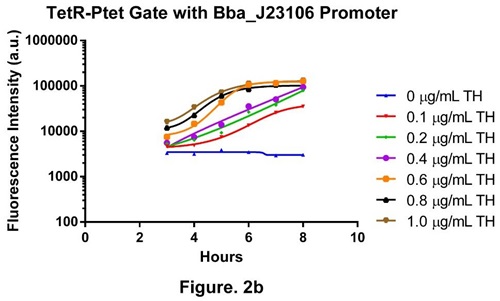 3.3 The concentration of the repressor impacts the steady state.

When the concentration alters, the circuit changes in both initial state and the induced state . 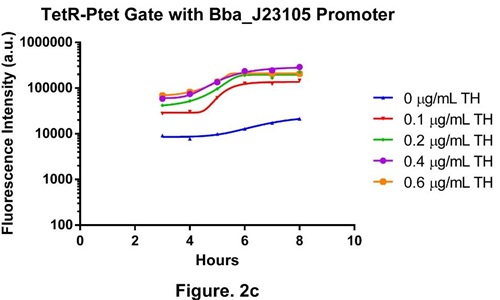 The result showed an inversely proportion, which means the higher the concentration, the lower the quantity expressed.

3.4 How the concentration of inducer influences the steady state.

In order to observe the influence, we observed the alteration of fluorescent intensity at the 5th hour at different concentration of TH.(the promoting strength is 0.47, ) 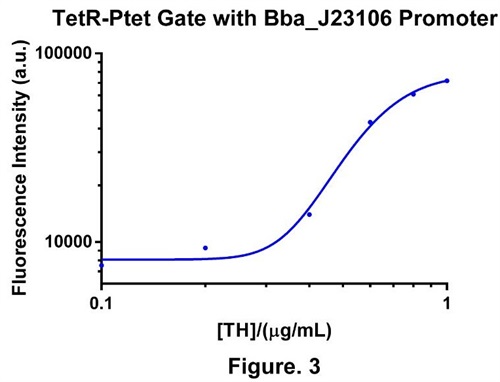 The result is a curve in a "digital signal type" , which means that the repressor has the synergic effect.

To prove our suspect, we tested LacI-Plac again . 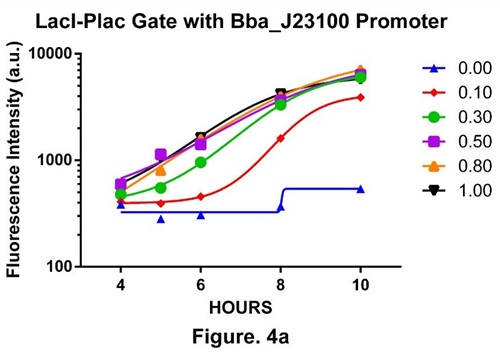 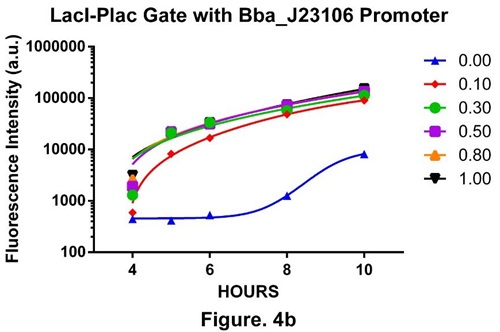 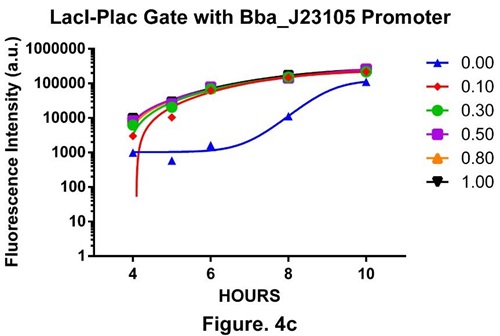 The response condition is similar when we changed an element that has the same type.

There are still some problems, for instance in Fig.4, the response condition became very fast as we used a weak promoter. This issue occurs because of the choosing of promoters and the concentration level of the inducer. It is uncertain for every single element. Therefore, how to maintain the comparability of the parameter as while as acquiring a significant result is on the top of our agenda.

Nevertheless, does our promoters as stable as we thought? We cannot make sure and we have figured that during testing. It is the reason of the uncertainty of most elements. This also stimulate the synthetic biology field to set up a qualify standard to describing and submitting.

While quantitative biology is developing step by step, some special model can get involve. At that time we will be able to use more qualify and more elegant language to describe the characteristics of elements and the foundation of synthetic biology will be more mature. We are looking forward that day!