In the device that we created so far, the basic principle of establishing Device 1.0 or 2.0 is based and very much relaying on the RNA interaction appeared inside the prokaryotic organisms. Therefore, in order to provide a clear picture of our device, there are certain illustrations need to be clarified:

We believe that if we let microRNA served as an ‘input signal’, then there must be a sensor that can receive it. It appears to be the anti-microRNA segment. Moreover, combining GFP and anti-microRNA would be the simplest sensor we can make. We hope that insertion of the anti-microRNA segment in to the expression cassettes of GFP would complete the coupling we mentioned above. But the question is, the impact of the insertion on the original GFP’s expression is still remaining uncertain. Therefore, we independently transformed the test group plasmids and measured florescence data 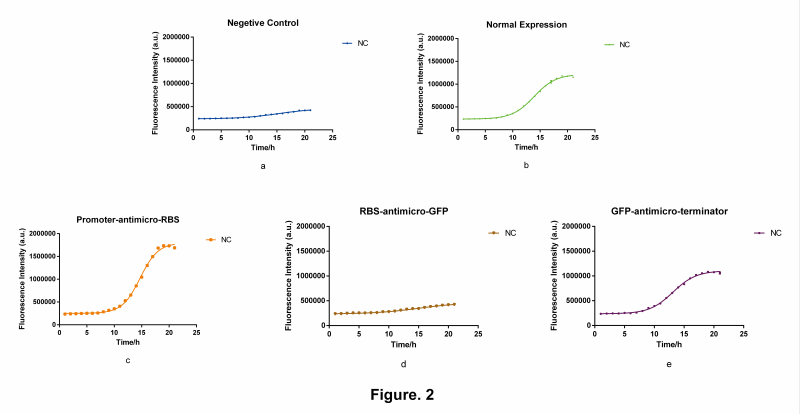 2、selections of the anti-microRNA’s insert point

Informed by our instructor, mostly, experiments of microRNA in eukaryotic organisms, the anti-microRNA would be inserted in to 5’-UTR of the ORF. However, need to mention, for prokaryotic cells, we know that the missing of nuclear membrane brings the contemporary translation and transcription. Therefore, following hypothesis would make sense: if we insert anti-microRNA segment in to 5’-UTR with a prokaryotic test subject, there is a great possibility that the RNA interaction won’t happened before the protein translation complete, which means the insert position is meaningless. Therefore, combining Illustration 1 and 2, two result are expected in this experiment. First, the insertion of anti-microRNA should not have impact to the normal expression of GFP and, secondly, the insertion of anti-microRNA will correspond to the microRNA as we expected and have impact on the GFP’s final expression rate.

To determine the perfect inset position of anti-microRNA, we selected three different positions of GFP’s expression cassette. Then we transformed the three test groups and measured florescence data, respectively

3、 the influence of microRNA in prokaryotic cells

To answer the question of the effectiveness of microRNA in prokaryotic cells, we transformed normal E. coil which individually contains plasmid (Device 1.0 or 2.0) to the competent statue. Afterwards, we transformed microRNA in to the E. coil by heat shock method and measured florescence data 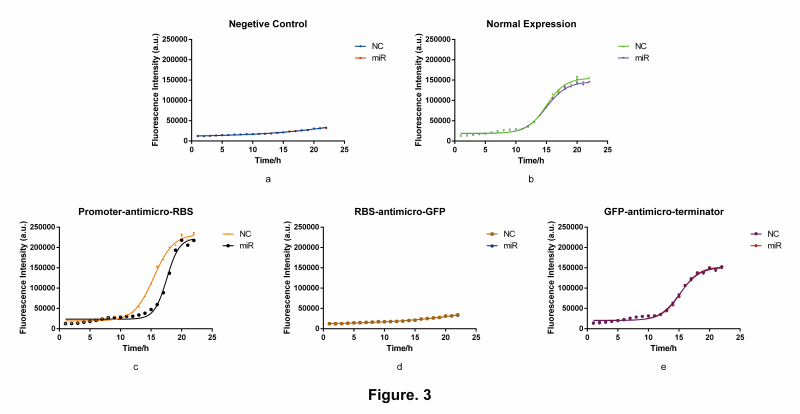 To prove the most vital functional concept of our device, we have done:
1、 Constructed three devices with three different anti-microRNA insertion position;
2、 Done transformation of each device and the test of initial statue, respectively;
3、 Transformed microRNA in to device selected by step 2, tested the response function.
Through steps above, selection is acceptable to be applied to the further test and construction.
Finally, data shows that Promoter-antimicro-RBS and GFP-antimicro-terminator would produce normal florescence light when there is no RNA interaction, which implies that the insertion in these two points would have no influence on normal expression of GFP. (Figure 2c, 2e). Furthermore, when the microRNA has been transformed in to the device, florescence intensity has dramatically changed in Promoter-antimicro-RBS. This illustrated that only Promoter-antimicro-RBS would be able to maintain functionality in prokaryotic cells (figure 3c), meanwhile we acquired ideal device that could be applied to further experiments.