After the introduction of Alzheimer's Disease (or simpler, AD), our team decided to design a new system of AD diagnosis. A molecular diagnosis of AD will be achieved by cheaper, safer and simpler methods.

The principle of design

MiRNA has a function of inhibiting translation process of mRNA. It can combine with mRNA based on the base-pairing, forming RNA-Induced Silence Complex (RISC), which decreases translation efficiency or degrade mRNA by some nucleases.

2. Transcription Factors(TFs) and their use in genetic circuits

There are many kinds of reporter. Our group use a fluorescent protein that shows green light(GFP) . That is because it has a lot of virtues, such as easy to detect, high sensitivity, stable fluorescent properties, high resistance, can be express easily and could be used in detecting living cells.

Devices we have built

First we designed a Green Fluorescent Protein (GFP) expression device controlled by miRNA (Fig. 1). A piece of anti-miRNA which is complementary to the miRNA we used is inserted to the GFP gene expression cassette. The prediction is written below: When there is miRNA, the combination of miRNA with the anti-miRNA will disturb the expression of GFP. Furthermore, the more miRNA the sample contains the less amount of GFP will be produced. Hence, the fluorescent intensity of GFP is a reflection of the concentration of miRNA in the device.

In Device 2.0, we improved Device 1.0. In the original one, the fluorescent intensity and the concentration of the miRNA shows a negative correlation. That may lead to a misunderstanding of the results. Therefore, in the new version, we put a NOT gate system in the circuit. That is to say: using miRNA to control the expression of repressor, and the repressor continue to prevent that of GFP (Fig. 2). By this transition, we predict that the concentration of miRNA and the fluorescent intensity will change simultaneously and lead to an easier and more directly distinguish. 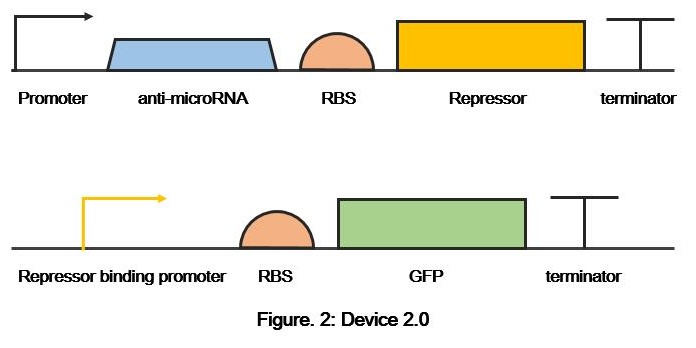 Through the mathematical model and the effect of Device 1.0, we observed that miRNA did control the expression of GFP and the whole device really worked. Unfortunately, this effect doesn’t last long. The amount of GFP would gradually back to the level of Normal Expression as time goes by. We suspected that it is because the miRNA is a foreign matter for the bacteria. Thus the concentration of miRNA only decreased with the bacteria reproduction. We called it “dilution effect” which impair the miRNA effect.

The effect of miRNA is "transient" instead of "constructive" which causes unnecessary inconvenience to detection. Therefore we designed Device 3.0 in theory. Through the design of a genetic circuit counter, we can transform the transient signal of miRNA to a constitutive signals.(Fig. 3) 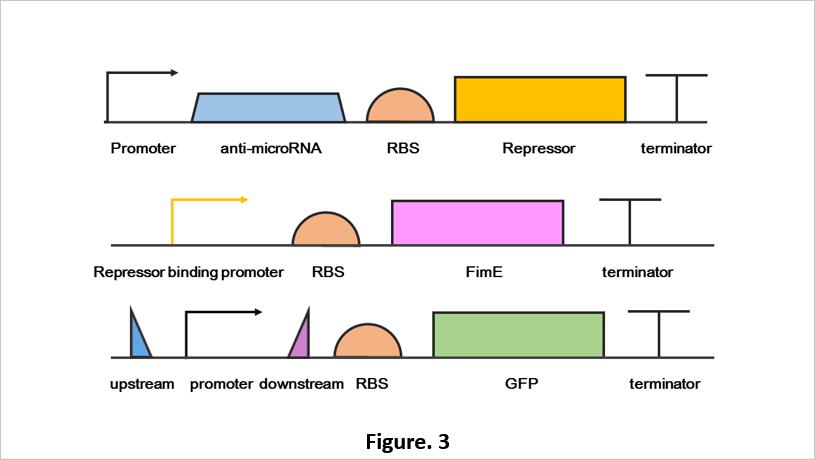