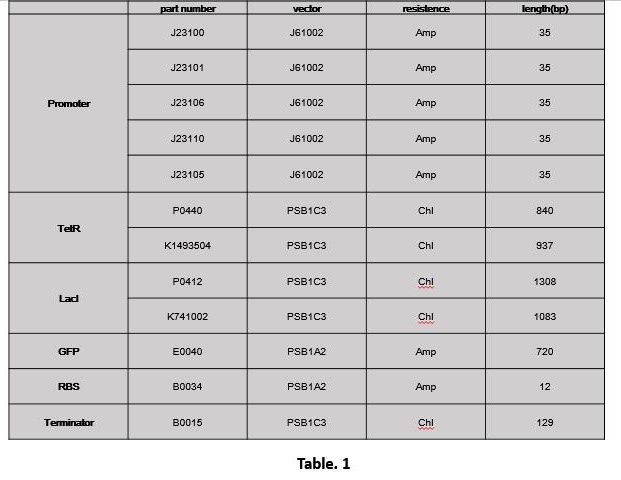 1.3 design and synthesis of anti-microRNA Ji'nan biosune Biotechnology Co. Ltd. has designed the anti-microRNA of has-miR-34c for our team. And Nanjing GeneScript biological science and Technology Co., Ltd. has synthesized segment sequence (Fig. 1). The anti-microRNA we synthesized includes 4 linkers which can Exact complemented with matured microRNA. Prefix and suffix at the end of segment are applied to the construction of our circuit.

1.4 construction of the plasmid Using the property of the prefix and suffix, we did the 2A assembly to construct our Device 1.0. and 2.0 step by step（Fig. 2）. 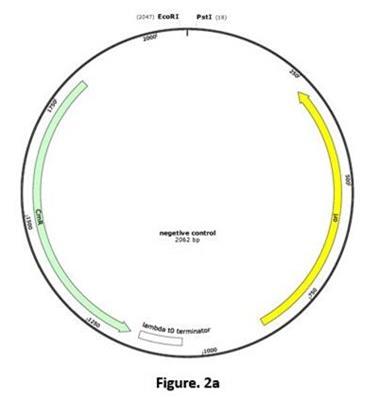 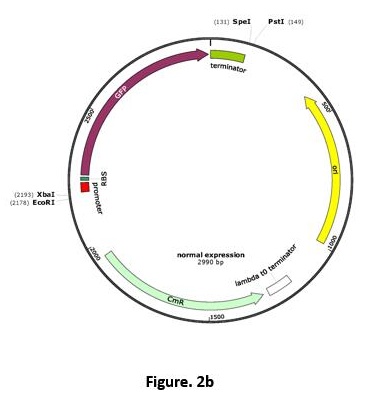 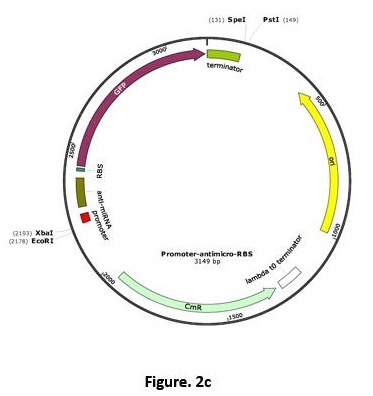 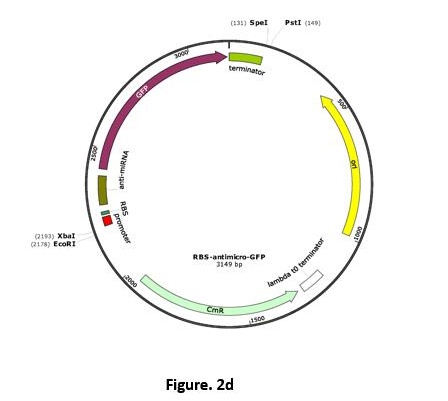 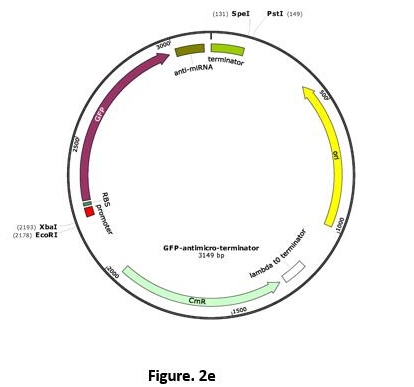 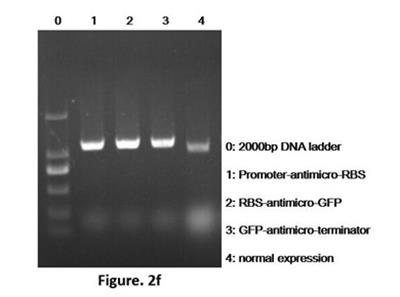 Device 1.0 microRNA would have a direct impact on GFP’s expression. Determining GFP’s fluorescence intensity differences will justify the content amount of microRNA (Fig. 3).

According to the figure, between the time intervals of 12-19 Hours, subject device(transforming microRNA) result in significant lower fluorescence intensity than Negative Control (NC).

Therefore, we start to test the impact of different concentration microRNA . We separately add 10uM unrelated microRNA, 10uM target microRNA and 20uM target microRNA in to our device. Afterword, use Flow Cytometry to collect data at 10 Hours (Fig. 5). 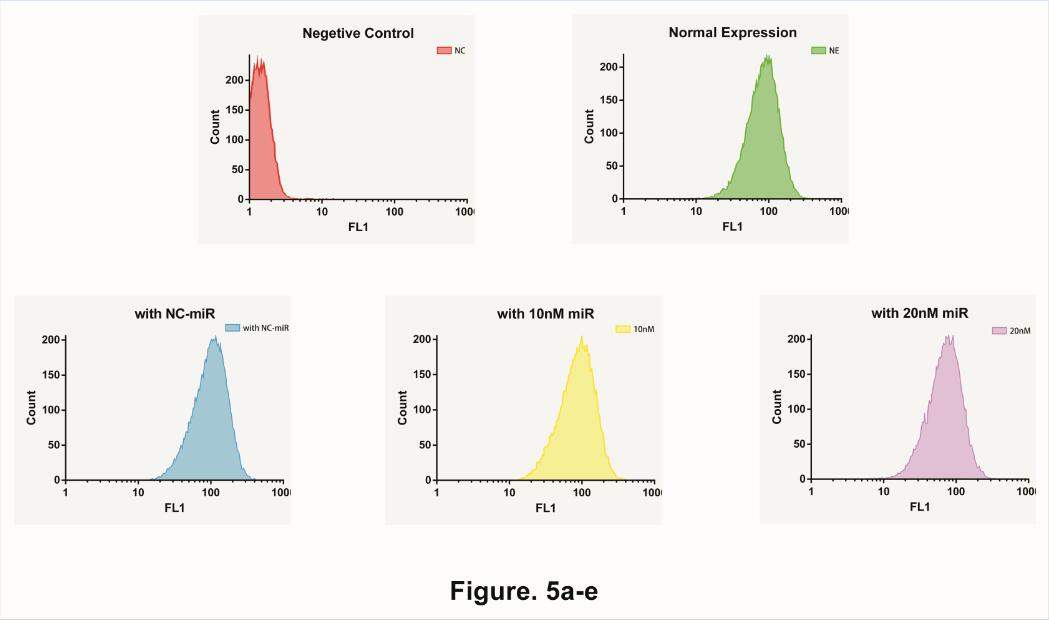 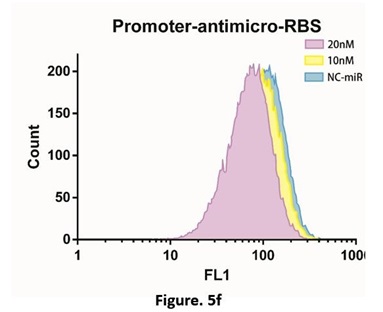 Needless to say, average expression rate shows a fine deceasing Gradient graphic, indicated that our system could not only determine the existence of microRNA but also the quantity of microRNA as well.

Considering the feedback result from human practices, we designed Device 2.0

Before any experiment, we can’t determine which kind of repressor would provide the best initial intensity. Therefore we designed 8 combination devices including 4 constitutive promoters and 2 repressors (Fig. 6).

We transformed well-constructed plasmid in to competent E. coli cell, then we got Device 2.0.

Finally, we shifted microRNA into Device 2.0 and did a continuing florescent intensity report (Fig. 8). 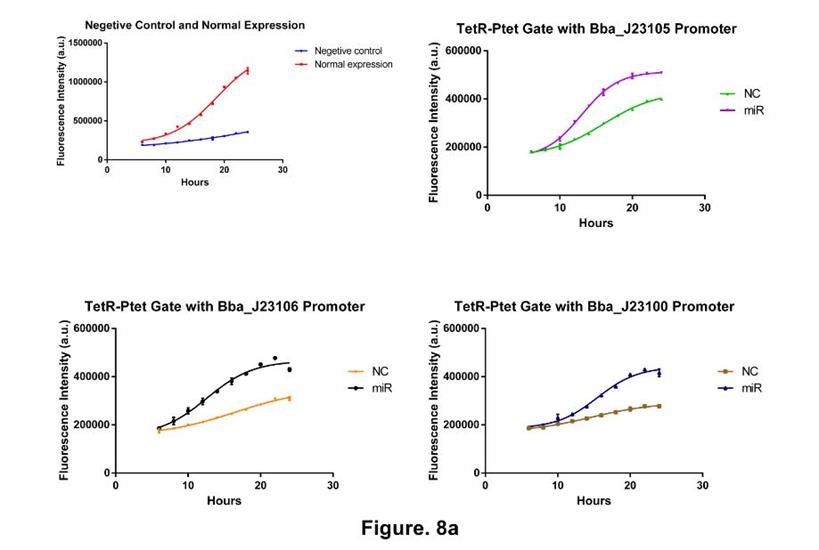 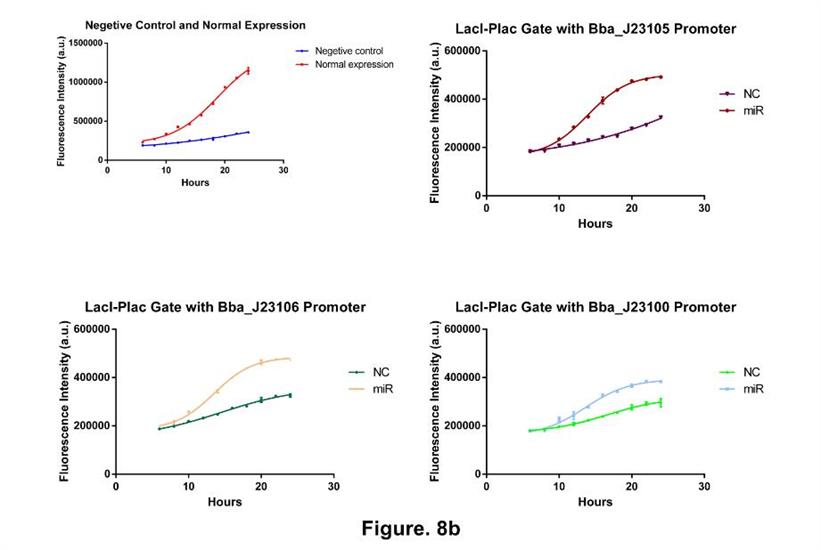 Therefore, in contrast of repressors with different promoter strengths (Fig. 9), we minus florescence intensity expressed by each system after the microRNA add to them with the florescence intensity each system expressed before the microRNA add into the system to get the Δ Florescence Intensity of each device. According to the figure, we can tell that in the first place, each "Δ Florescence Intensity-time" function figure of each device appeared to be a bell curve. This means that the window period of Device 2.0 still exists. Along the growth rate of the bacteria speed up, the division of the bacteria will make the florescence intensity decrease to the same level of the period when the microRNA hasn’t introduced to the system yet. Therefore, the Δ Florescence Intensity could be zero. Moreover, when the promoter strength of the repressor protein increase, "ΔFlorescence Intensity max" expressed a gradually decrease tendency. This decrease is especially well observed when we focus on the "Lacl-Plac NOT gate" gene circuit. Therefore, we can draw a conclusion that the different combination with different promoter strength could produce a theoretical ‘detectable minimum value ’. We could say that if the concentration of the microRNA is below this theoretical value, predictable low florescence intensity would occur because of the low concentration of microRNA's incapability of covering the amount of the repressor's production. In another word, retroactivity would occur in our experiment. When the promoter strength of the repressor gradually decreases, the "detectable minimum value" will decrease as well. This means the detectable range will increase. For microRNA with the same concentration, a combination with low promoter strength will output a relatively higher " Δ Florescence Intensity max" which perfectly fit our observation result.

To choose the most favorable repressor for Device 2.0, as the figure 9 present, Lacl-Plac genetic circuit provides a distinguishable data under different promoter strength. This means when the promoter strength is settled, for different microRNA’s concentration, there will be a great possibility for Lacl-Plac to produce very distinguishable data that could be applied to real detection and experiment. On the other hand, for the NOT gate circuit constructed by TetR-Ptet, it didn’t express a very distinguishable difference of Δ Florescence Intensity max when under the conditions with a clear difference in promoter strength. Still, we cannot say that the TetR-Ptet is not a favorable element for the construction of Device 2.0. Possible reason is that the system reached to the ‘detectable minimum value’ in advance due to the weak binding affinity of the repressors to the DNA. Therefore, maximum promoter strength will produce a high Δ value. In this case, the device is favorable to work under a condition of a low concentration of microRNA. Moreover, we think theoretically should exist a genetic circuit which repressor has strong binding affinity to the DNA and favors the condition with a high concentration of microRNA.

Our expectations were fulfilled with these well-constructed genetic circuits. And by adjusting the concentration of microRNA (Device 1.0) and the promoter strength of the repressor protein (Device 2.0), we have illustrated that our devices are capable for producing a Laddering Response to the different microRNA’s concentration and our devices are possible for further more practical applications.

Even though so far our devices have been proved to be ‘well-functional’, we don’t regard them as the ultimate system. A big obstacle about "the window period" still lies between our system and more practical applications. This means our system has a certain period for data collecting and a huge disadvantage in real practices. Limited by the iGEM’s schedule, we cannot make any further development for now. But we do have a few ideas about our new and more powerful Device 3.0. To learn more it, please click the future design of our website

1. About the experimental apparatus 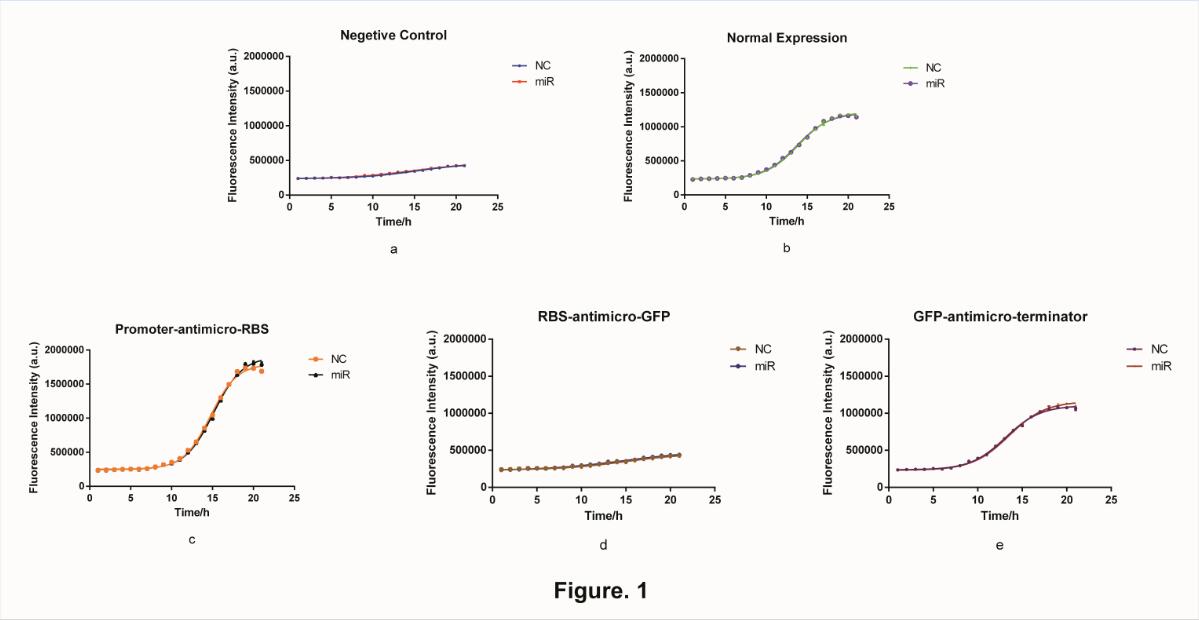 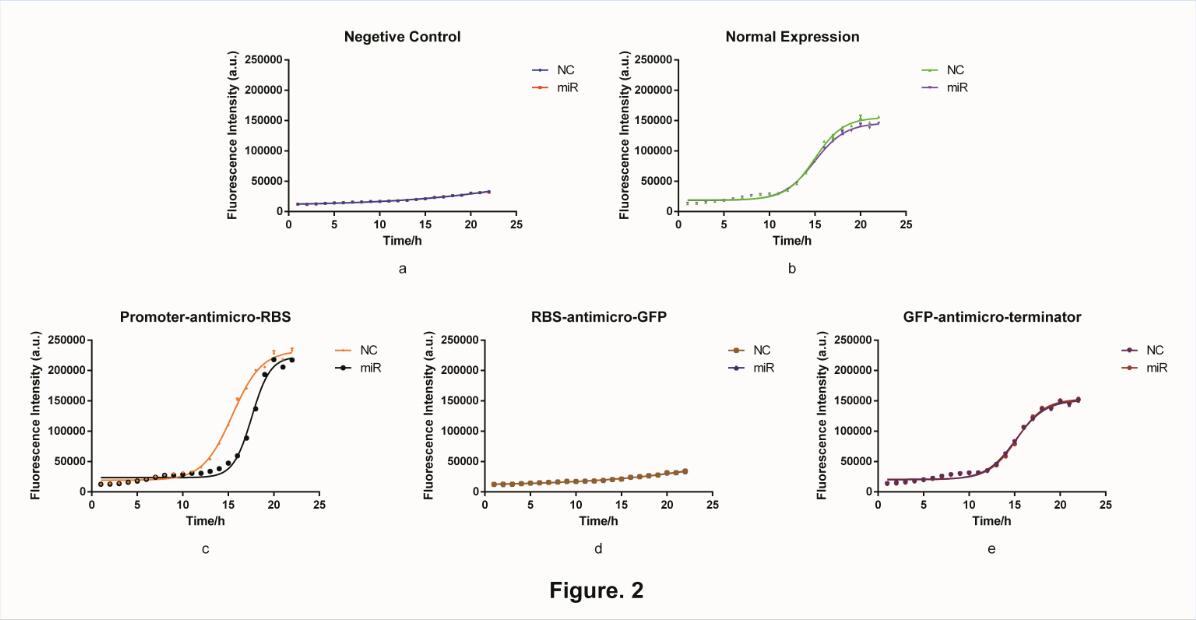 3. The research of “Promoter-antimicro-RBS” device

When we examine the effect of anti-miRNA insertions on GFP expression in the initial state, we obtained the following data (Fig. 3). 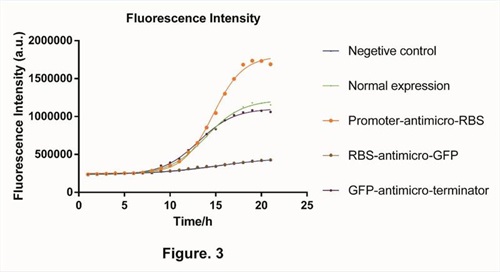 From the figure, both “promoter-antimicro-RBS” and “RBS-antimicro-GFP” could express GFP regularly, but the fluorescence intensity of “promoter-antimicro-RBS” increased significantly. We hypothesize that perhaps the sequence of anti-miRNA itself can act as a “strong promoter” or “strong RBS”, so as to increase the expression of GFP. Hence, we constructed additional gene circuits to prove our ideas. Also, we conducted fluorescence detection and obtained the following results (Fig. 4, 5). 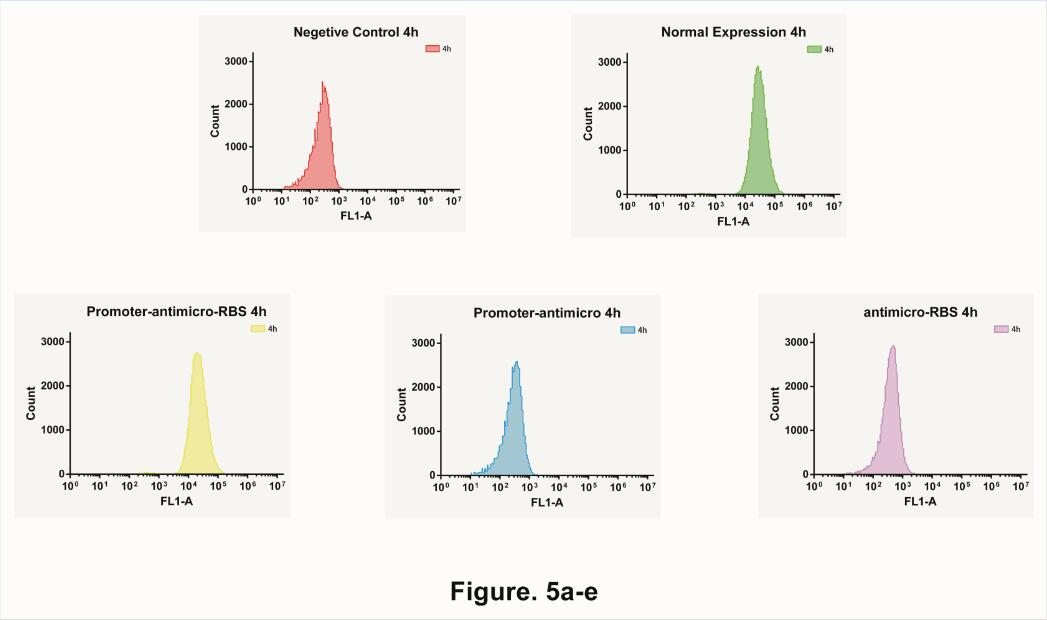 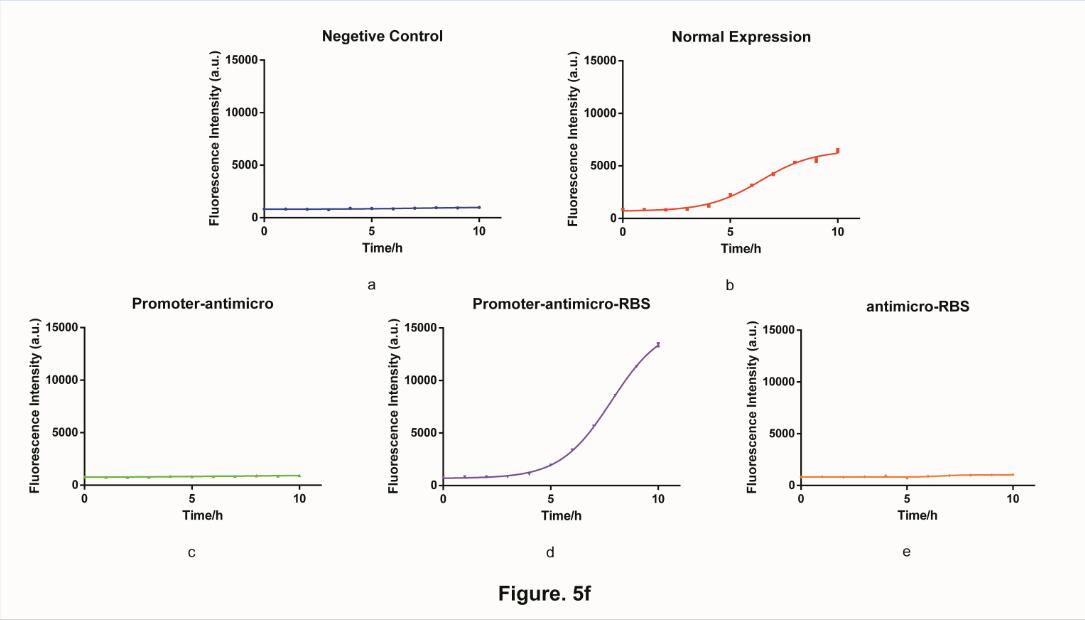 It can be seen that the express ability of the system lose when promoter or RBS is removed from the expression. This suggests that the anti-miRNA sequence itself cannot act as an independent element to initiate transcription or translation of gene. Therefore, the increase in GFP expression of promoter-antimicro-RBS could be explained by the interaction between anti-miRNA sequence and promoter or RBS, which indicates that there are certain problems about the insulation between components, which is caused by the design itself. We hope that some team could develop a better solution to this problem in the future.

Next, we used a flow cytometry to collect data for more detailed view of the expression of the promoter-antimicro-RBS device. Flow cytometry is a method of measuring the size, density, fluorescence type, and fluorescence intensity of a event (single bacteria). We performed the same flow cytometry experiments on the same samples as Figure.5. The results are demonstrated below (Fig. 6, 7). 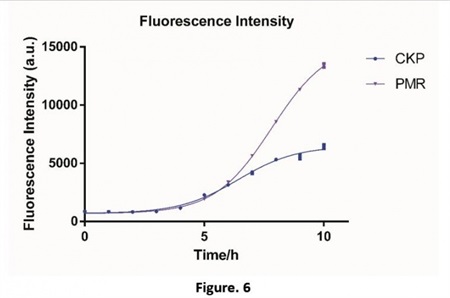 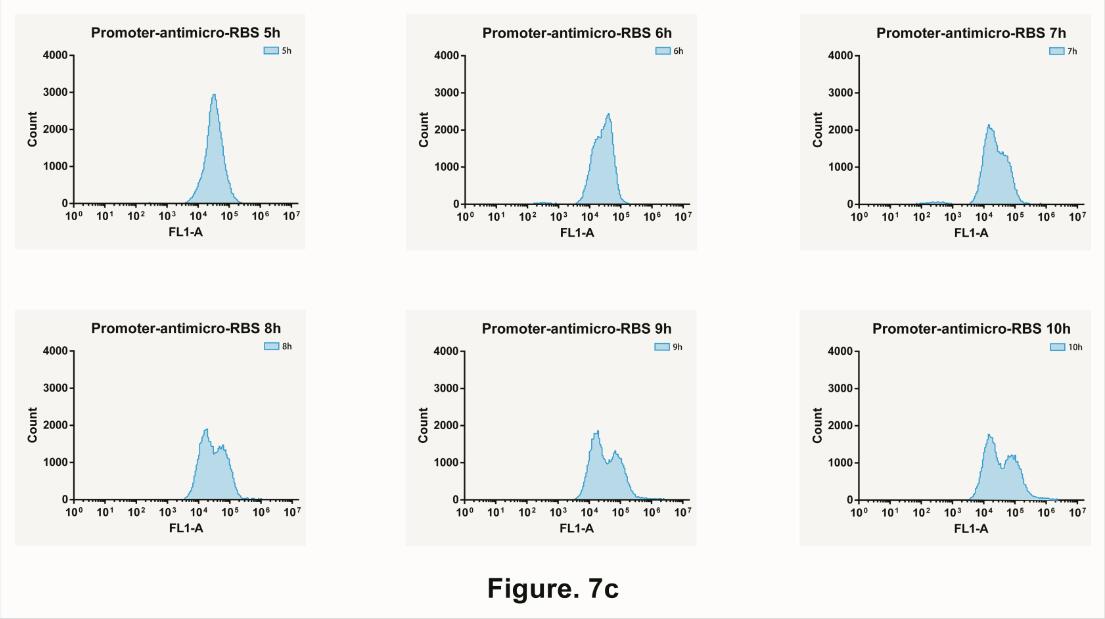 We observed a very interesting phenomenon from the data of the flow cytometry: Comparing to Fig. 6, it can be seen that the expression of GFP in the “promoter-antimicro-RBS” was consistent with that in the “normal expression” between 2 and 5 hours, and the results of the flow cytometry showed good single peak results (Fig. 7).After 6 hours, the GFP expression of the “promoter-antimicro-RBS” in the microplate reader was gradually higher than that in the “Normal expression”. At first, we think that the different growth conditions of bacteria may lead to this difference, but the data of flow cytometry bring different interpretations: First, from the comparison of the total profiles, we can see that the two devices have no significant difference in growth rate ( this can also be demonstrated by the number of particles per volume of flow cytometer, this data is not given), but for the distribution of fluorescence intensity, “promoter-antimicro-RBS” changed significantly after 7 hours. The bacterial population differentiate, and concentrate in two regions. The single peak pattern in the data gradually become double peaks (Fig. 7). We do not know why the bacterial population spontaneously generates and differentiation, and we hope that some team could give this issue a reasonable explanation in the futrue.

In our exception, our device, with further development and verification, could finally achieve commercialization and become a portable, popular medical detect device. We hope that our device could become one of the standard configurations in community medical services just as same as current HBV Qualitative test paper.

Still, there are many problems need to be solved to fulfill such a goal, including problems like how to decrease the cost, how to make the system become portable and how to write appropriate instructions for common users. Among these problems, we will provide following illustration to answer one of the most important questions above all, how to remove the ‘windows period’ of our device.

Analysis and experiment demonstrated that our device has its own "window period" (specific time period for observing, if missed, there is no more chance for users to observe the real-positive result.). Current effort could make the outcome of RNA-interaction become visible, yet how to cancel the "dilution effect" comes with the growth of the concentration of microRNA.

FimE Site-specific recombination has been applied by BIT-China in 2015. It has a vital trait that for same gene segment subject, it can and only can transcript for once. We expect the repressor which controlled by microRNA could regulate the expression of FimE. We placed promoter in Expression Cassettes of GFP at the interval between upstream and downstream sequences. (And the initial sequence of promoter is reversed) When the concentration of microRNA increase, the repressor's concentration would decrease. Therefore, FimE will have a normal expression and initiated the expression of GFP by re-reverse the promoter’s sequence to make it become functional. Afterward, when "dilution effect" of microRNA appeared and the concentration of which has decreased to an amount that below the effective concentration, by then, repressor would re-expressed and the FimE content will continuously decrease to zero. Yet the re-reversed promoter will not be affected and made the expression of GFP continue goes on.Therefore, even though a large concentration of microRNA is existed, promoter will not be consequently reversed by a long term existence of FimE content and the signal will be stable. So we designed an ideal genetic circuit (Fig. 1). 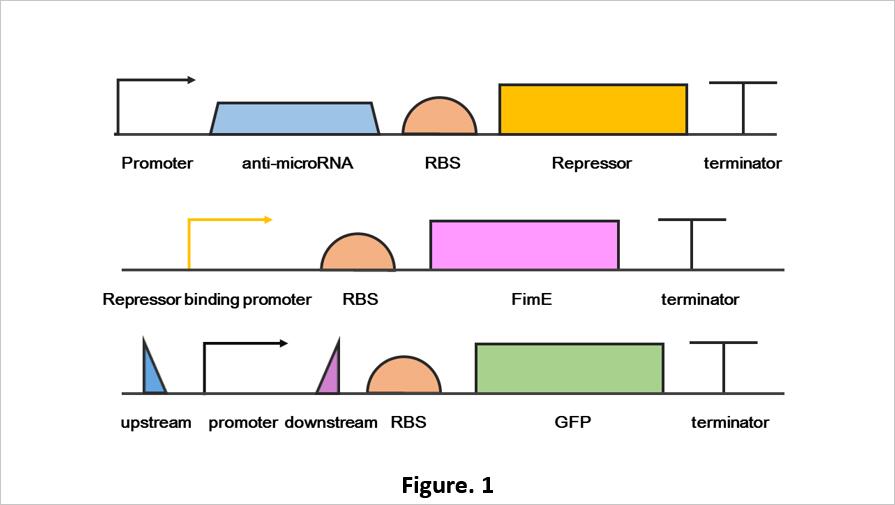 Even though we have achieved constitutive expression, there is one problem still has our attention. That is for the circuit we designed can only justify the existence of microRNA. A definite quantitative determination of microRNA’s concentration is still unachievable. A change of repressor or initial promoter of the repressor is needed. Moreover, different circuit have a different FimE content, through which we may achieve the definite quantitative determination of microRNA’s concentration somehow.

High-pressure steam sterilizer for medium, water and other consumable materials (121°C for 20min). Filtration sterilization for liquid that is not stable at high temperature such as antibiotics.

We use GENERAY GK1002-200 miniprep kit for minipreps according to manufacturer’s protocol. 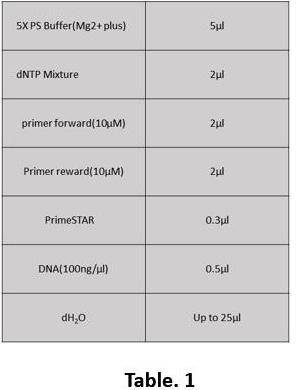 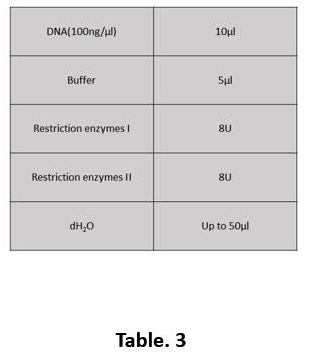 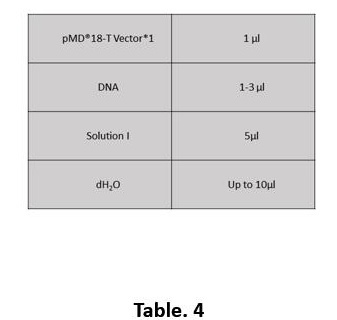 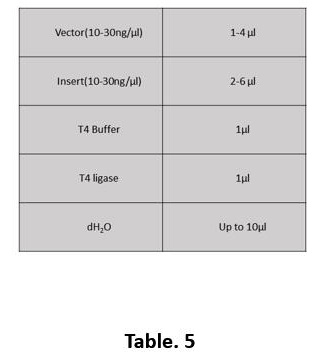 This protocol is frequently used in our examination of colonies, which are from linearized product transformations. Just pick single colonies from transformations to do a colony PCR. If the results are right, do the further experiments. 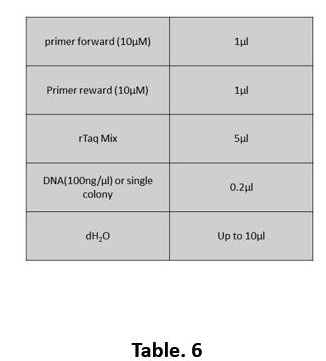