The main experiments we performed to develop our sensor. For our daily activities and experiments, visit our Notebook. For a list of our protocols, check out our Protocols page.

We obtained promising data from adding plasmid DNA to our cell-free system. However, because the Collins paper specified the use of linear DNA in their experiments, we compared the signal from eGFP in linear and plasmid form in a cell-free reaction. The linear construct does not produce a stronger signal than the plasmid construct.

We decreased the cell-free reaction volume from the 25 µL given by the PURExpress protocol. To make their sensor, the Collins group only freeze-dried 1.8 µL of reaction onto paper discs, so our system would have to produce a signal with a much smaller reaction volume. In addition, performing experiments with a smaller reaction volume would make PURExpress last longer. PURExpress was one of the most expensive reagents we used, yet it was also central to our project. We set up reactions with a range of volumes from 1 to 25 µL and measure the fluorescence from eGFP. The reaction produces an appreciable signal when the volume is as low as 5 µL.

To obtain a good reading from the plate reader, we had to add at least 10 µL of liquid to the plate wells. For endpoint assays, we diluted the completed cell-free reactions by two before reading, which gave us good results. We wanted to try diluting the reaction before incubation to run a time course without increasing the amount of PURExpress used. However, cell-free reactions to not proceed nearly as quickly when diluted.

To circumvent the presence of unsequestered substrate strand, we synthesized hairpin DNAzymes that connect the two strands into one DNA strand that forms a hairpin loop. Based on experiments in cell-free extract, the hairpin produces minimal activation of the toehold switch in its folded state, and it produces much greater activation of the switch than the duplex when the substrate is cleaved.

To analyze the activity of the DNAzymes, we added metal ion and observed the completed reactions on denaturing polyacrylamide gels. The gels do not show cleavage product for either the lead or thallium DNAzymes, but adding metal ion to the cell-free reactions with the DNAzyme and toehold switch results in expression of LacZ, suggesting that cleavage does, in fact, occur.

To determine the concentration of DNAzyme that would produce the most activation of the toehold switch in reaction without inducing background expression of LacZ, we tried a range of concentrations of DNAzyme in the reaction. Preliminary results suggest that a concentration of 100 nM is too high, but we did not have time to pursue these results.

To determine the detection limit of our system and to see if lead interfered with our circuit, we tried adding a range of concentrations of lead to the reaction. Preliminary results suggest that concentrations as low as 50 nM can be detected (the EPA MCL is 72.4 nM), but we did not have time to pursue these results.

Our initial experiments were performed with the D and G LacZ switches from the paper from the Collins group, "Paper-Based Synthetic Gene Networks". However, because G switch activity was neater in some experiments, we switched to using exclusively G.

Using plasmids from the Collins group that contained the switch and trigger for the two LacZ switches, we expressed lacZ in cell-free reactions. The two triggers were switch-specific, and the switch did not produce LacZ in the absence of a trigger.

The DNA oligo should not activate the toehold switch if it is bound to another DNA strand. In our system, the trigger should be sequestered by the catalytic DNAzyme strand as part of the DNAzyme's substrate strand. We added the hybridized DNAzyme duplex in a cell-free reaction with the toehold switch. When hybridized to another DNA strand, the trigger does not activate the switch. 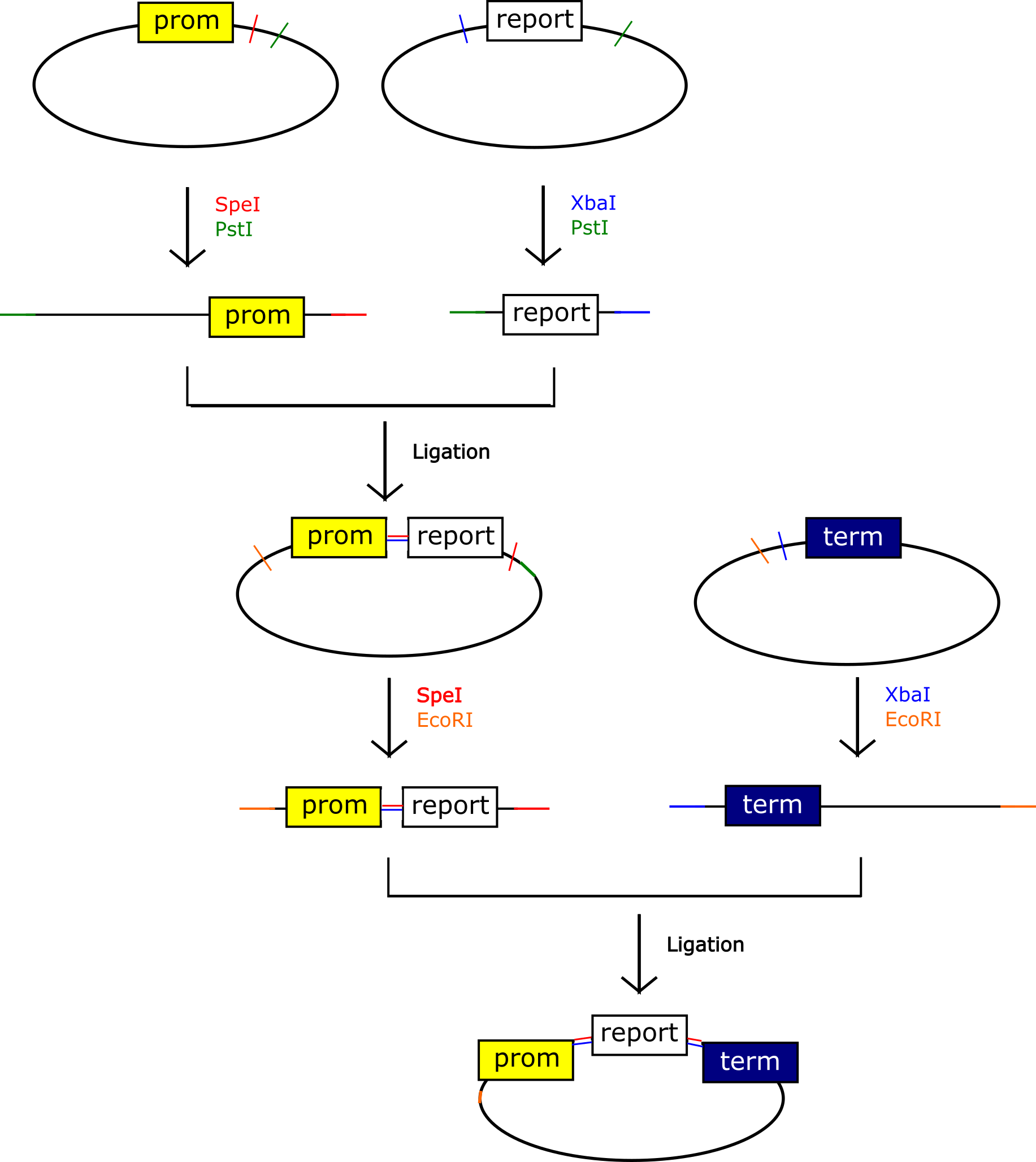 Because wild-type lacZ contains an EcoRI site, it cannot be BioBricked. We were unable to grow a mutated version of lacZ from the bacterial stabs sent to us by iGEM, so we mutagenized the Collins toehold switch to obtain a lacZ sequence with a mutation in the EcoRI site.

To construct our amplifier, we followed the same assembly scheme as illustrated for amilCP. The T3 constructs were synthesized from IDT, then added into the plasmid backbone to assemble.