The results of the main experiments described on the Experiments page. For more details about our daily activities and experiments, visit our Notebook.

In Week 8, we found that linear DNA does not perform better than plasmid DNA in PURExpress. 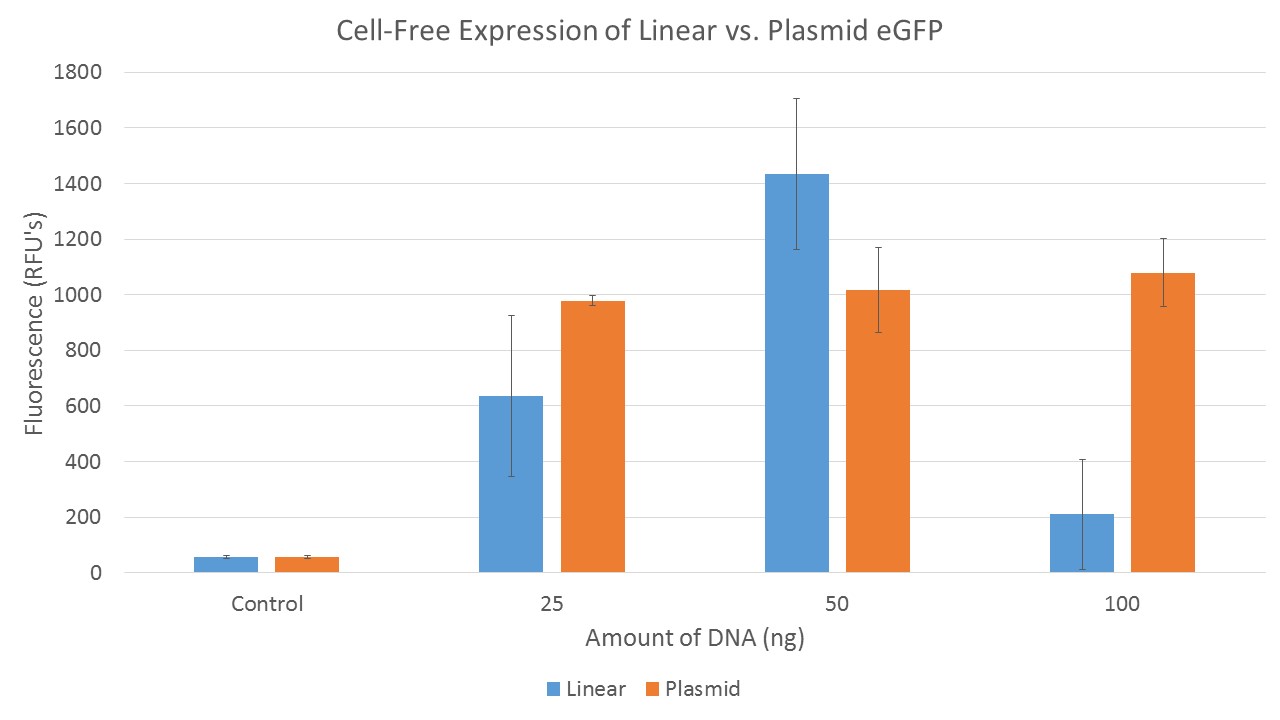 However, a comparison by concentration of DNA instead of mass would be more accurate because the plasmid has much more "extra" DNA than the linear form.

In Week 6, we ran cell-free reactions over a range of volumes. Each reaction contained 5 ng/μL of plasmid eGFP. As shown in the figure below, there was still a signal with a reaction volume of 5 μL. Thus, all our reactions are run at 5 μL. 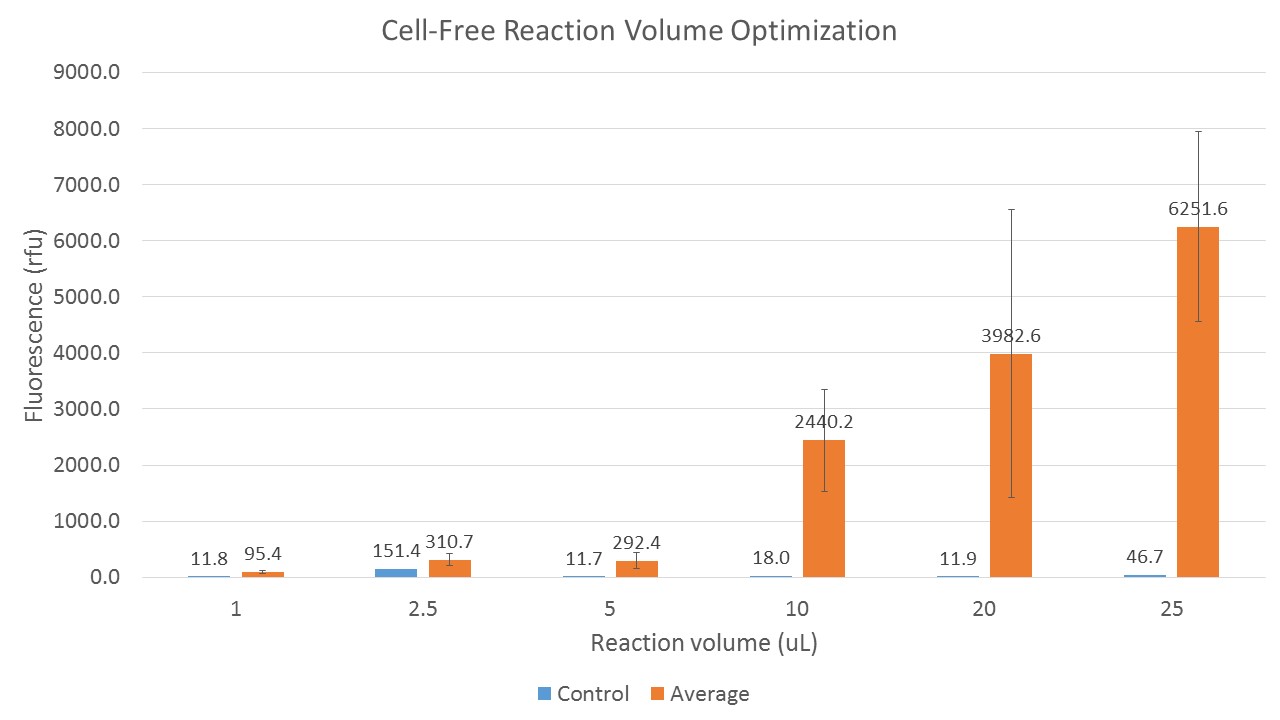 The time course was conducted in Week 10. After six hours of incubation in the plate reader, the diluted reactions did not turn purple. However, after leaving them in the incubator overnight, the reactions darkened in color. The time course data shown below is more a function of evaporation than reaction progress; the liquid evaporated over the course of the run. 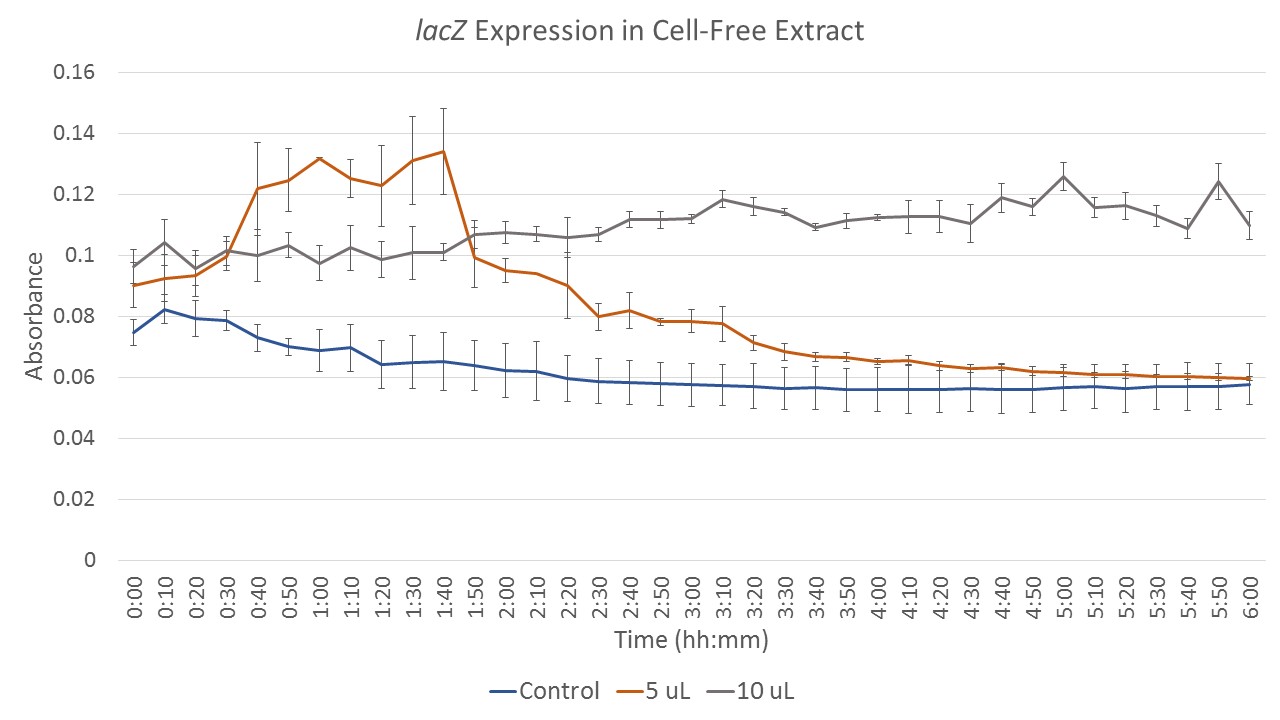 We analyzed the efficiency of sequestration in Week 11. The thallium DNAzyme was annealed at ratios of substrate to catalytic strand varying from 1:1 to 1:500. The gel below suggests that all of the substrate strand is sequestered, but the thickness of the catalytic strand's band as the ratio increases could be blocking the signal from the substrate strand. However, the duplex did not activate the toehold switch. 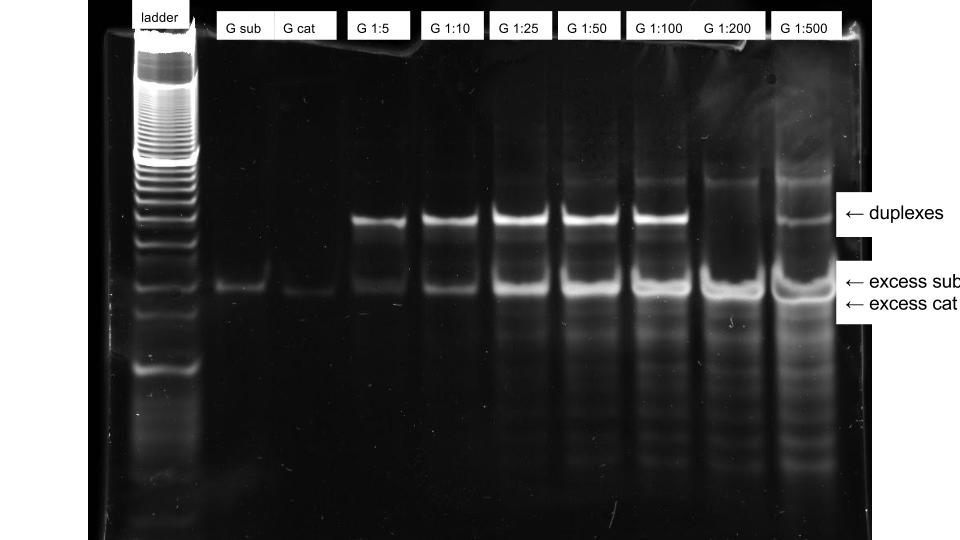 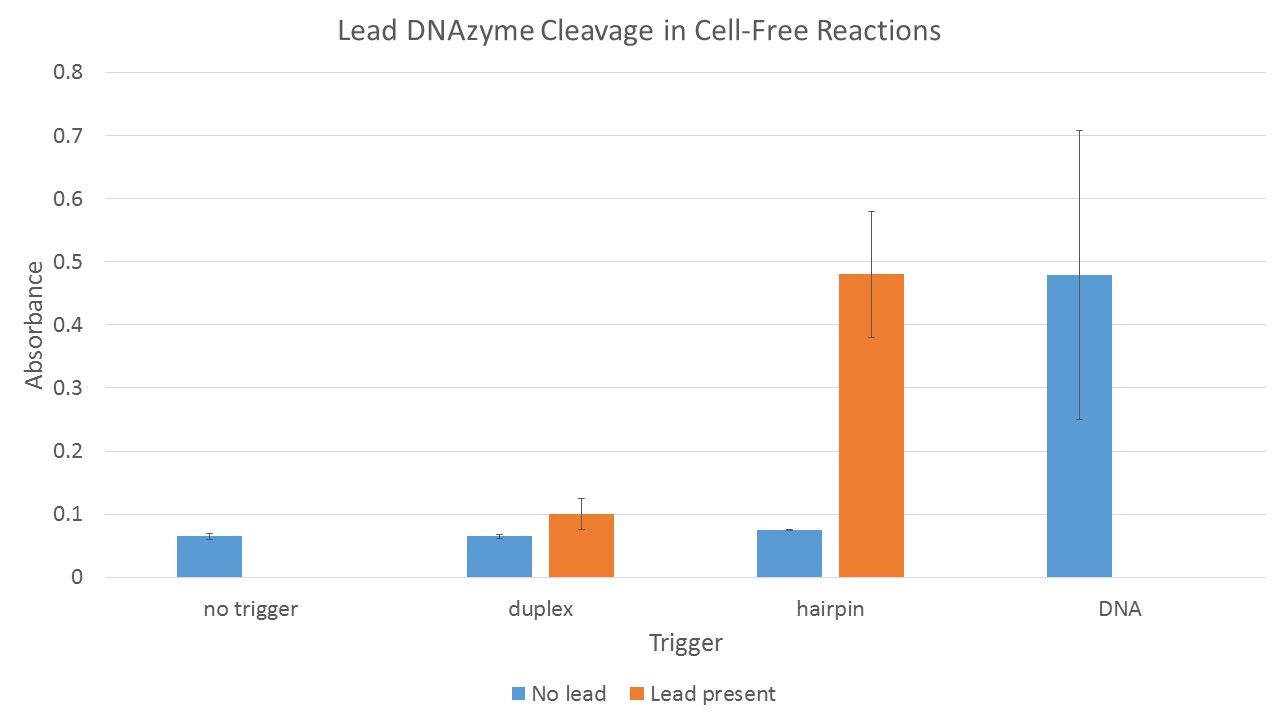 Although the dPAGE assays we performed in Weeks 7 to 10 do not provide clear information, the cell-free reactions suggest that the DNAzyme does cleave its substrate. Below, the LacZ expression produced by the toehold switch activated by the hairpin DNAzyme cleavage product is compared to the LacZ expression in a system without lead. The final concentration of DNAzyme in the reactions is 3.74 nM, and the final concentration of lead is 2 µM. 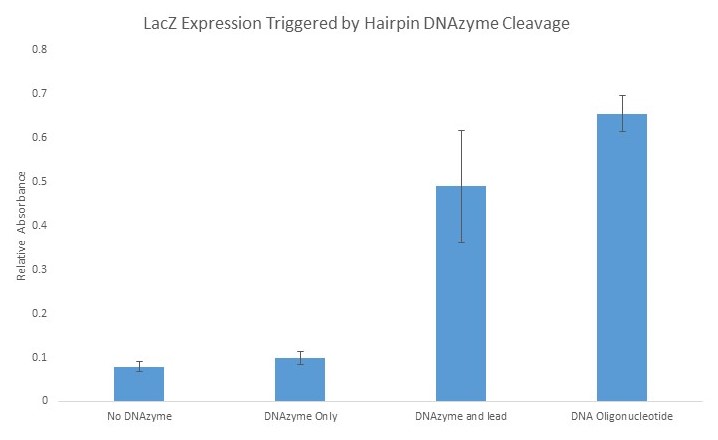 As shown below with data from Week 5, the plasmid triggers activate the toehold switch with as little as 10 ng of plasmid in a 25-μL reaction. 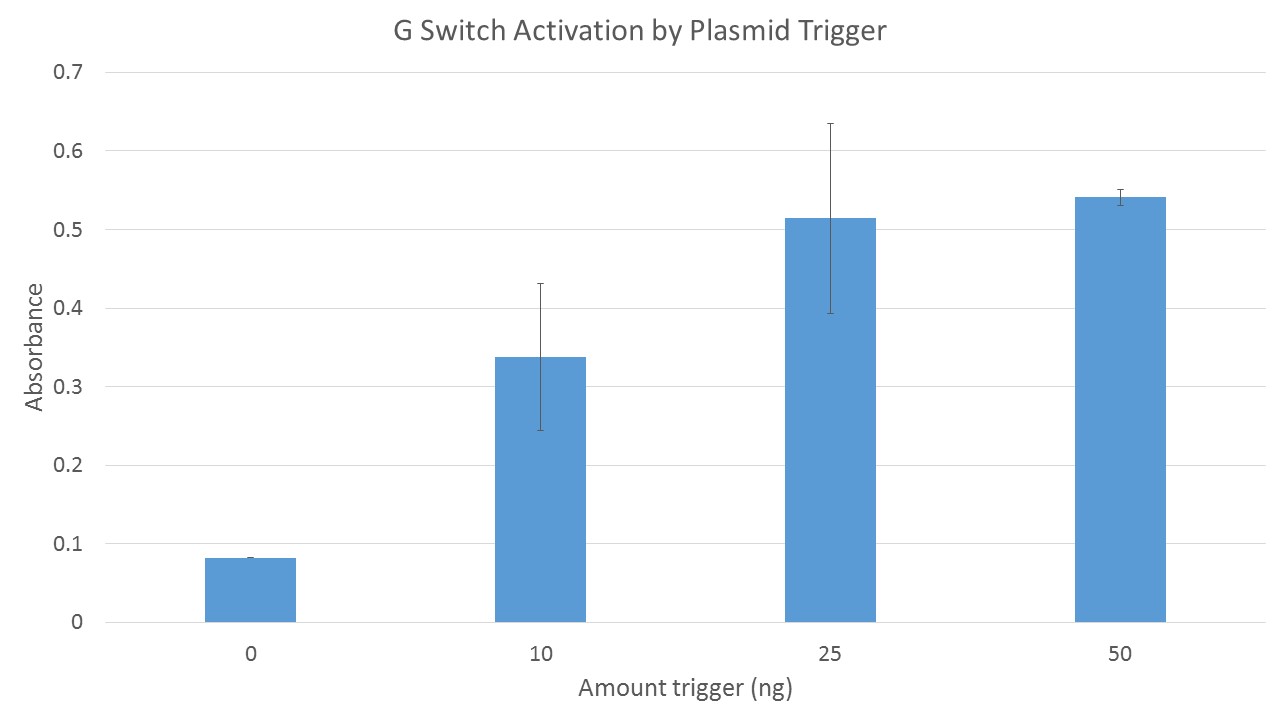 In Week 6, we found that the DNA trigger also activated the toehold switch at concentrations as low as 1 pM. The toehold switch also displays a dosage response. In addition, the triggers are switch-specific--the trigger for the D switch does not activate the G switch. To our knowledge, we are the first to demonstrate that a DNA strand can also trigger a toehold switch. 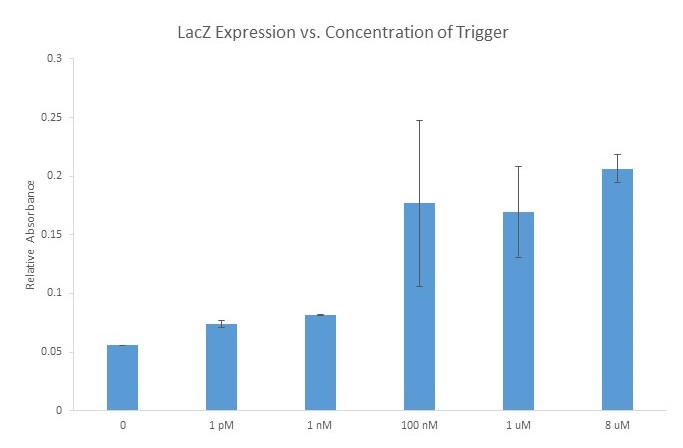 As shown in the results for the Hairpin versus Duplex experiment above, the duplex and folded hairpin do not activate the toehold switch because the trigger is hybridized to the catalytic strand.

Results from sequencing in Week 11 suggest that our completed construct contains CFP instead of amilCP, although the construct contains both the pT7-RBS and terminator. No color was detected in T7 cells or in cell-free reactions.

The site-directed mutagenesis, despite many attempts, has not been working. We originally started with this (add link) protocol. Instead of using ______ system, we used Phusion. However we never saw any DNA bands in our gels. We then changed to Q5 High Fidelity protocol. We now have DNA showing in our in gel, but have no distinct bands to gel extract. As of October 16, we are still trying to get this protocol to work.

We finished our first round of assembly of our amplification system in Week 14. However results showed that we only had RBS-T3 in all of our components. Since we do not have a LacZ we can use, we have not started construction of this second part of the amplifier.