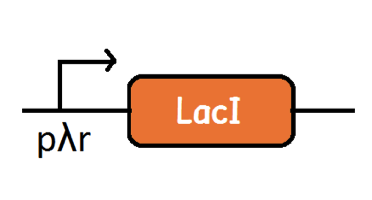 This part is a part of a larger construct which allows the system to change from one state to another. When the E. coli cells containing the larger construct is induced with IPTG, the IPTG binds with the LacI repressor, allowing the other pathway to be expressed, and it expresses a CI repressor which shuts down the first pathway. This part was created in order for teams to be able to easily place their genes of interest in this "switch" system. They would combine their gene of interest with the pLamdaR-LacI part and then proceed to combine it to the rest of the system. We had to make sure there were no illegal restriction enzyme sites (EcoRI, PstI, SpeI, and XbaI) which cut the part in places where we did not want them to. The part was created by combining multiple parts found on the iGEM parts registry.

The pLac-ClpXP-CI sequence combines with the pLamdaR-LacI sequence, creating a system. The system at first expressed pLamdaR-LacI which also has a gene of interest along with its degradation tag (ts-Purple+DegTag in our project). The LacI represses the pLac promoter and does not allow the ClpXP-CI system to be expressed. Once IPTG is induced into the E. coli cells, it binds with the LacI proteins, discontinuing the repression of the pLac promoter. The pLac promoter begins to express ClpXP-CI and the CI repressed the pLamdaR promoter, discontinuing the expression of LacI and the gene of interest. The produced ClpXP system then begins to degrade the gene of interest which is tagged with a degradation tag. Other teams can put their gene of interest into this system and find out how fast certain proteins can degrade under certain degradation tags or perform whatever they wish to with this switchable system. The pLac-ClpXP-CI system was built so that illegal restriction sites were not present in our sequences so that other teams wishing to use the system may be able to use it. It can also be easily combined with other sequences. The pLac-ClpXP-CI system is not found in any genomic sequence. It was built using parts found on the iGEM registry and from certain parts found in E. coli cells (i.e ClpXP).

This construct is an example of the switch system that was used in our project. Once the E. coli cells containing our construct were induced with IPTG, the pLamdaR pathway would be shut down while the pLac pathway would be turned on. This allows for the degradation of the gene of interest, eGFP. This construct is the finished product of our project after using 3A Assembly to assemble the two different promoter pathways. This construct is switchable because IPTG can be added to switch the system from one pathway to another. We had to make sure there weren't any illegal restriction enzyme sites. Double terminators and double stop codons were added appropriately so that translation and transcription didn't continue to express random DNA sequences. The part was created by combining multiple parts from the iGEM registry.