To further characterize ClpXP, we created an inducible genetic circuit in which ClpXP will degrade the desired protein. We designed two reporter systems with 3 levels of degradation tags.

Before induction, the LacI gene will produce lac inhibitor molecules that will bind to the pR11 (pLac1) site and inhibit it from promoting ClpXP and the CI. This system allows tsPurple to be significantly expressed in the E. coli cells. Upon induction of IPTG, IPTG molecules will bind to the LacI repressor, which thereby allows pR11 to promote ClpXP and the CI. The CI will repress the p-lambda-r promoter to ensure that no additional Lac molecules are being produced. Once expressed, ClpXP will proceed to degrade the chromoprotein, tsPurple.

Moreover, we have assembled constructs in two different knockout strains: 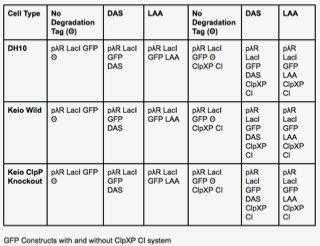 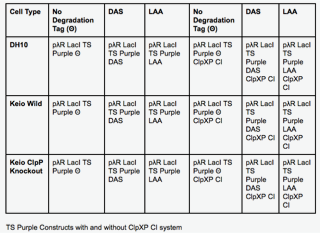