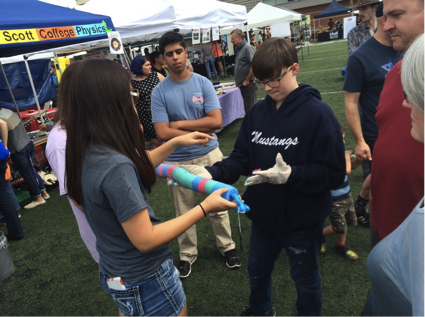 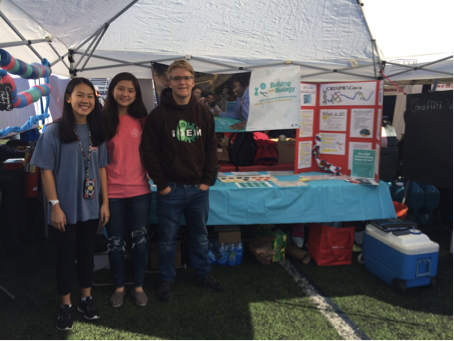 The Maker Faire is a two day event where scientists, engineers and other “makers” gather to promote their craft to the public. We partnered with the Atlanta Science Festival in hosting the venue where the public could learn about synthetic biology. The events we hosted were from a kit provided by Building with Biology, a foundation dedicated to the education of synthetic biology to the public. The activities provided included a simple DNA extraction, a simulation of CRISPR/Cas9, and graffiti wall where attendees wrote down their thoughts on synthetic biology. The event was a great success in educating the public. People of all ages enjoyed the DNA extraction and children especially liked the CRISPR/Cas9 simulation. The graffiti wall also stimulated many conversations on synthetic biology. For instance, many people who were initially wary of genetic engineering ended up appreciating its uses in medicine. Overall, people enjoyed learning about such a confusing topic in an easy to understand way. Over 500 people visited us throughout the duration of the event and learned more about applications of synthetic biology in the world around us. We could not have hosted this event without the Georgia State University iGEM team and the Atlanta Science Festival. In addition to providing materials for us, the two groups also contributed volunteers to help with our activities. 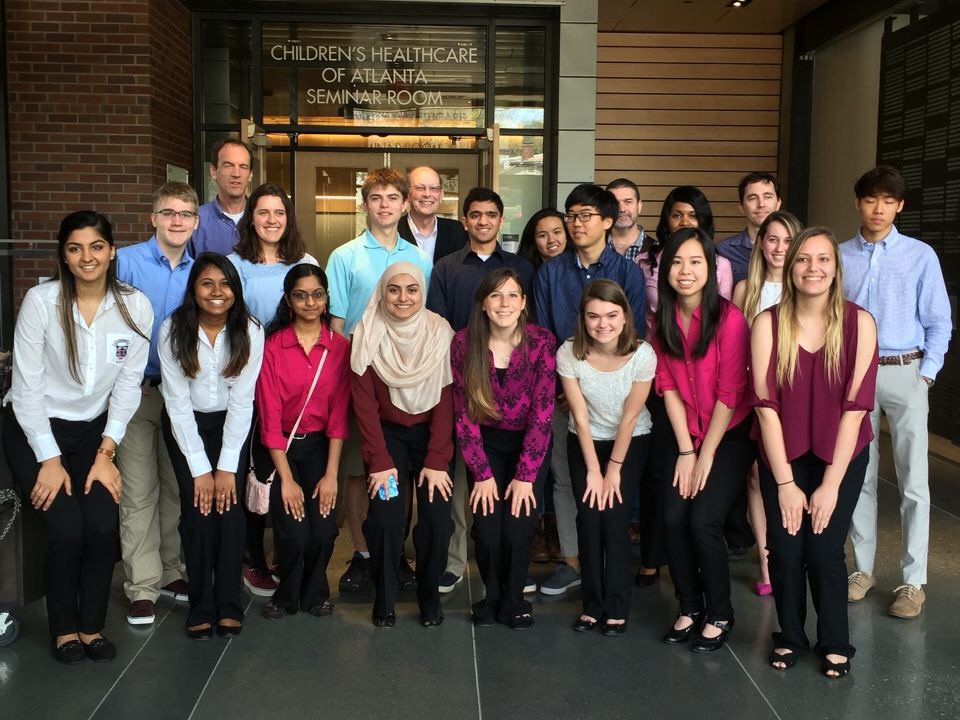 The Atlanta Science Festival is an annual event in Georgia where interested people of all ages are able to learn more about science and see how it affects our daily lives. Our iGEM team was chosen to host a Discovery Dialogue discussing genetically modified organisms with the public. A group of experts, including a professor of chemical engineering, an ethicist, and several scientists, initially discussed aspects of GMOs in their career field, and then responded to audience questions. Overall, the forum was extremely educational and the audience polls taken reported a 32% increase in positive perception of GMOs. The panelists provided a balanced view of GMOs, discussing both the benefits and drawbacks. Some positives of GMOs they mentioned were the decreasing use of pesticides, the ability to cure malnutrition, and more nutritionally beneficial plants. The major drawback discussed was not knowing the long term effects of genetically modified organisms. Many participants admitted they focused more on the negative effects of GMOs, and were glad to hear a new perspective. The Discovery Dialogue was a great way for the public to voice their concerns about GMOs and educate them about both the positives and negative effects of genetically modified organisms.


People on the Panel:
Dr. Mark Styczynski:
Mark Styczynski is an Assistant Professor in the School of Chemical and Biomolecular Engineering at Georgia Tech. His group is using synthetic biology to develop diagnostic blood tests and analytical chemistry techniques to study cellular metabolism. He received his Ph.D. from MIT and his B.S. from the University of Notre Dame, both in chemical engineering.
Dr. Arri Eisen:
Arri Eisen received his Bachelor’s of Science with honors in biology from UNC-Chapel Hill and his doctorate in biochemistry from UW-Seattle. He is currently a Professor of Pedagogy in Biology, the institute of Liberal Arts, and the Center for Ethics at Emory University, where he has been since 1990.
Mr. Milt Hinsch:
Milt Hinsch attended the University of Georgia and received his master of science in organic chemistry from the South Dakota School of Mines and Technology. He has also worked as the Technical Services Director since 1996.
Jessica Siemer:
Jessica Siemer is a Graduate Research Assistant from Georgia State University. She received her Bachelor of Science in Biomedical/Medical Engineering at Georgia Institute of Technology.
Natalia Brody:
Natalia Brody attended the University of Georgia and was a member of their iGEM team. She is currently attending Emory University and is pursuing neuroscience and behavioral biology as a pre-medicine student.
Omolola Falade Osi-Efa:
Omolola Falade Osi-Efa is the Community Outreach Chair for UGA’s iGEM team. She is currently attending the University of Georgia and studying biochemistry, biotechnology, and molecular biology. 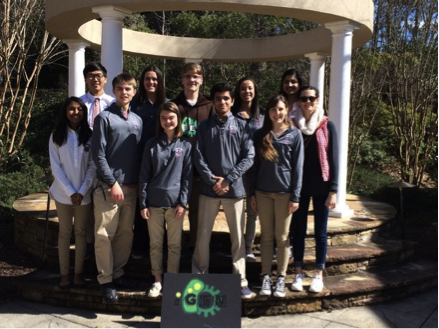 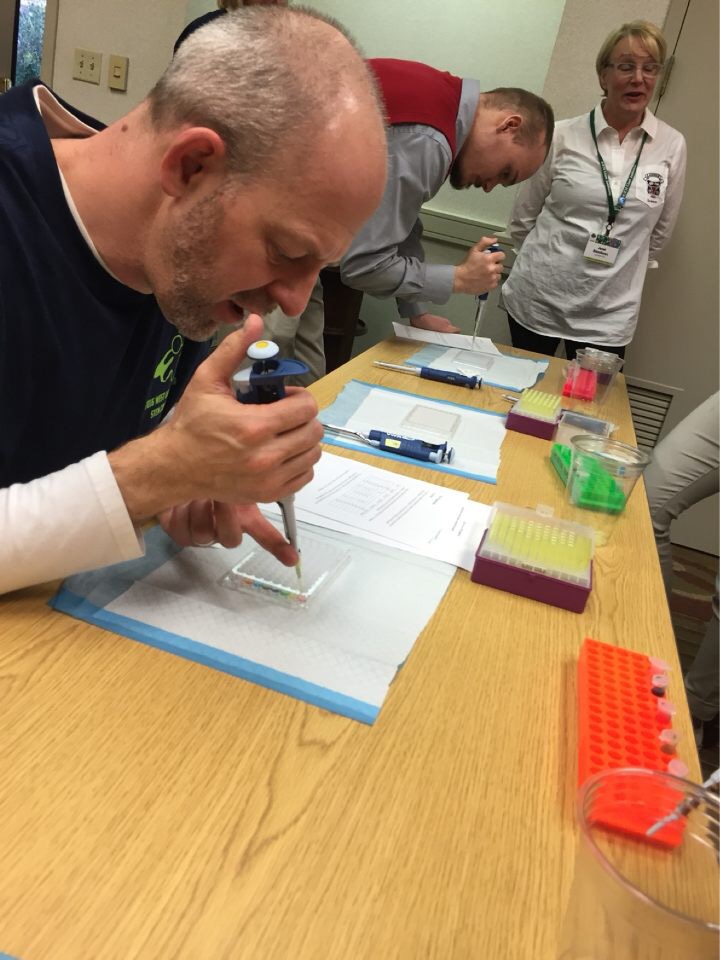 At RESA, a professional learning agency focused on improving the work of educators, our team met with science educators across the region and held a workshop on synthetic biology. Throughout our presentation, we focused on how teachers could integrate synthetic biology curriculum into high school classrooms. In order to do this, we introduced the teachers to iGEM and told them how they could start a team at their own school. We also showed them how to perform a simple pipetting lab that could be recreated in their classroom. Our iGEM team also explained our current project by creating an actual electrical circuit displaying the pathway our synthetic biology mechanism follows. Our overall purpose was to expose more high school science teachers to iGEM, as well as encourage them to include more synthetic biology based lab experiments and learning into their lesson plans.