3. 3/4 of diabetic people are in low and middle income countries.

4. Diabetes is a major cause of blindness, kidney failure, heart attacks, stroke and lower limb amputation.

6. Almost half of all deaths attributable to high blood glucose occur before the age of 70 years.

Diabetes mellitus, also known as diabetes, is a metabolic diseases in which blood sugar levels cannot be regulated properly. If left untreated, diabetes can lead to many complications including heart disease, chronic kidney failure, or even death.

Diabetes is usually classified into two types: type1 and type2. Type 2 diabetes comprises the majority of people with diabetes around the world. Overall, around 90% of all adults with diabetes have type 2. 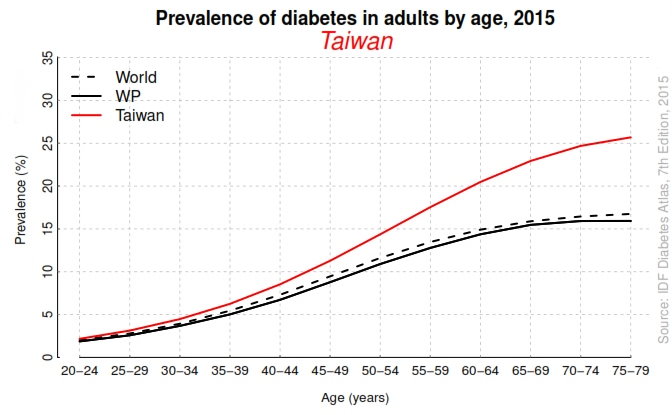 The figure describes the prevalence of diabetes in different age groups in Taiwan, West Pacifics, and the world. According to the graph, it presents that more people under the age of 60 suffers from diabetes in many middle- and low-income countries. Meanwhile, for developed countries, a growing population over the age of 60 makes up the largest proportion of diabetes prevalence.

Before having diabetes, an early warning sign would appear which blood sugar levels exceed the normal range. Although it is not as high as a diabetic patient, it is definitely a signal to raise people’s awareness and is called “pre-diabetes”. If the blood sugar level is usually above the normal range, the risk of developing full-blown diabetes would increase drastically. It's a crucial indicator for diabetes diagnosis. However, diagnosing pre-diabetes is not yet a prevalent concept in Taiwan nor in other regions around the world. World Health Organization (WHO) estimates that the prevalence of pre-diabetes is increasing worldwide, and it is projected that more than 470 million people will have pre-diabetes in 2030.

Our idea is to develop a device to monitor people’s glucose with a user-friednly and non-invasive way in terms of a great lack of pre-diabetic awareness. Moreover, Type II diabetes is mainly due to insensitivity of insulin, resulting in malfunctioning blood glucose regulation. During urine formation, glucose would all be filtered into lumen after filtration process. All the glucose particles are supposed to be recollected after the reabsorption process. The glucose reabsorption is a process via SGLT1/2, members of the sodium glucose cotransporter family which are sodium-dependent glucose transport proteins. Among these two cotransporters, SGLT2 is the major cotransporter involved in glucose reabsorption in the kidney, proximately processing 90% of totally glucose reabsorption. However, SGLT2 can only transport glucose with the maximum blood glucose level of 180 mg/dl. Due to unstable glucose level, once the glucose level exceeds the SGLT2's limit, the extra glucose which is higher than 180 mg/dl would not be absorbed and would be spotted in urine afterward[3]. It means the urine with glucose can then be Found. Therefore, we consider testing glucose out of urine would be a good way monitoring renal health.