Above is a diagram of the larger genetic circuit we envision constructing with the individual parts we have characterized. The first component of the circuit (on the far left) checks for characteristics of the disease during the estrogen-high phase of the menstrual cycle and expresses the first recombinase if it senses these characteristics. The second component (in the middle) checks for characteristics of the disease during the progesterone-high phase of the cycle and expresses the second recombinase if it senses these characteristics. The final component contains the fluorescent output of the circuit — in healthy cells, the transcriptional stop signal between the promoter and the gene, as well as the having the gene in an inverted "off" state, suppress the expression of yellow fluorescence. In cells with the disease, however, the first recombinase is expressed and cuts out the terminator sequence, and the second recombinase is expressed and inverts the gene to the correct orientation, allowing expression of eYFP. This biological "and" gate with two temporally distinct checks for the disease greatly increases the specificity for an accurate diagnosis. The following walk-through will detail the mechanics of how the circuit works. 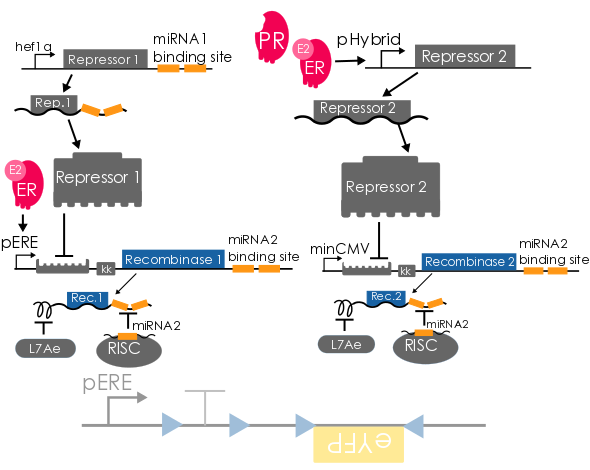 In the first component of the circuit, Repressor 1 is expressed constitutively, and since miRNA 1 is minimally present, this repressor is strongly expressed. Despite estrogen inducing the pERE promoter controlling Recombinase 1, Repressor 1 and miRNA 1 inhibit production of Recombinase 1.

Since neither of the recombinases are being produced, no modifications to the output component occur, and no yellow fluorescence is expressed. 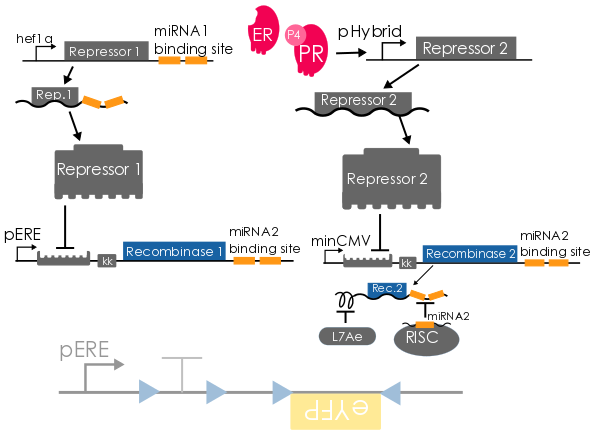 In the second component of the circuit, progesterone induces pHybrid, causing Repressor 2 to be expressed and, in conjunction with miRNA 2, suppresses the production of Recombinase 2.

Again, since neither recombinase is produced, the output component is unchanged, and no yellow fluorescence is expressed. 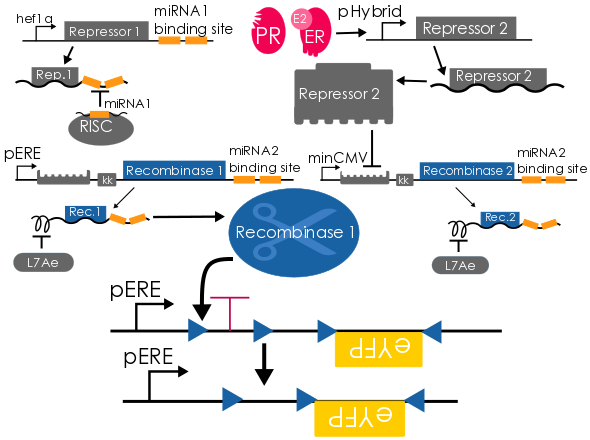 In a diseased cell during the estrogen-high phase, miRNA 1 is up-regulated, and miRNA 2 is down-regulated.

Now, in the first component of the circuit, miRNA 1 suppresses the expression of Repressor 1. Since miRNA 2 is no longer present, there is nothing inhibiting production of Recombinase 1 when estrogen induces pERE. The recombinase is expressed and cuts out the transcriptional termination sequence on the output component.

Although the transcriptional termination sequence is now gone, the eYFP gene is still inverted, so there is still no yellow fluorescence. 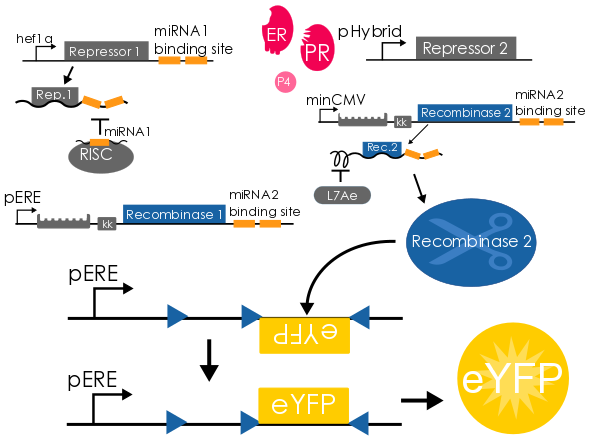 In a diseased cell in the progesterone-high phase, miRNA 2 is still down-regulated.

Even though Recombinase 1 is no longer being produced because estrogen is not present, the transcriptional terminator is already gone because the excision activity of Recombinase 1 is irreversible.

Although progesterone is present, pHybrid is not induced because the cell is progesterone-resistant and doesn't respond to the hormone. Thus Repressor 2 is not produced, and since miRNA 2 is also not present, Recombinase 2 is expressed, which inverts the eYFP gene to the correct orientation.

Now, when the cell cycles back to the estrogen-high phase, eYFP will be produced, so the cell that the circuit has identified to be diseased is now visibly fluorescing, indicating a positive diagnosis.


Back to Future Work & Design Home