Endometriosis is a disease of the female reproductive system that is generally characterized as the growth of tissue very similar to that of the inner lining of the uterus, the endometrium, growing elsewhere in the body, most often in the abdomen and pelvic regions though it has been recorded in the lungs and brain. While ectopic endometrial lesions are similar in appearance to the endometrium, having the same glands, the ectopic tissue behaves differently in response to hormones, as it cannot be shed at the end of the menstrual cycle. These lesions, cause extreme pain, or "killer cramps", especially during an affected woman's period. The pain may be related to the heightened inflammation around the lesions, as well as the scar tissue that the body creates to cover them. This scar tissue can have a devastating effect on the body, as it causes adhesions between abdominal organs, distorting their shape and affecting their function.
Symptoms of endometriosis vary between individuals but can include debilitating cramps, long (7+ days) heavy periods, fatigue, gastrointestinal disorders, chronic pelvic pain, shooting pain (ex. from the abdomen and down the legs), pain during sexual activities, lost pregnancies, and infertility.

In summary, endometriosis is an incredibly painful, chronic disease that too often goes untreated.

For another look at endometriosis, below is a video from the Endometriosis Foundation of America 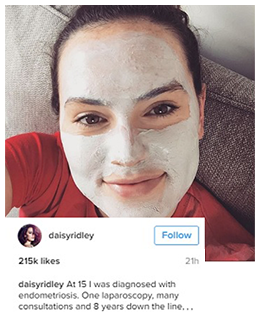 Endometriosis can appear when a person reaches puberty, as it is a very hormone-dependent disease. It's unknown exactly what causes endometriosis, though there are a number of theories, including retrograde menstruation, where tissue that is normally expelled during menses instead flows backwards and then cells embed in the surrounding tissue, or fetal development, which is supported by the fact that a number of infant autopsies have shown the signs of endometriosis. In the latter case, the misplaced tissue's disease characteristics would be activated by puberty, while the former may happen by chance at any point after puberty. There may also be a genetic component to endometriosis, as studies have found that girls with a close relative affected by endometriosis are 5-7X more likely to have it themselves.

Although endometriosis can affect any uterus-owning person after puberty, it's often thought to be more prevalent in older women; this is a myth. Endometriosis can affect a girl immediately after puberty, but this myth may have spread because of the immense delay between the onset of symptoms and an accurate diagnosis. Affected women wait, on average, between 7 and 10 years for an accurate diagnosis for their chronic pain.


How is endometriosis diagnosed and treated?

The diagnosis process begins with suspicion based on a description of symptoms like extended, painful menses and gastrointestinal discomfort. At this point, a woman might be prescribed low-level hormonal therapy in the form of a contraceptive pill, or be told to simply take pain relieving medications like ibuprofen. If painful symptoms persist, the situation becomes more complicated. The only totally accurate diagnostic method for endometriosis is a combination of laparoscopic surgery, to get sight of ectopic lesions of endometrial tissue, followed by obtaining a sample of that tissue and then sending it for pathologic confirmation in a lab. Laparoscopic surgery is no small procedure, and symptoms of endometriosis often very closely follow puberty. A doctor is thus unlikely to send a 14-year-old girl for diagnostic surgery, which may turn up nothing, when there are a variety of other, more easily diagnosed conditions that may also cause chronic abdominal pain. Beyond that, the steps toward laparoscopic diagnosis aren't always taken because providers underestimate the symptoms that a patient is presenting to them. Unfortunately, there is a stigma around menstrual disorders that is hard to get past.

This leads to the average 7- to 10- year wait between the onset of symptoms and a final diagnosis of endometriosis. However, the current diagnostic method is also lacking in accuracy because it assumes that endometriotic lesions will always be visible when in fact endometriosis can exist microscopically and still cause pain.

Once endometriosis is diagnosed, the most effective treatment is deep tissue excision to remove the growths of ectopic endometrium. Unfortunately, small lesions can be missed, causing further pain and requiring more surgery. Until recently, total hysterectomy (removal of uterus and ovaries) was used as a treatment for endometriosis, but it has not been proven effective and is going out of practice, as pain from endometriosis would often continue even after this extreme surgery.

We at MIT iGEM believe that if endometriosis could be diagnosed sooner, it would not give the disease as much time to progress, making treatment more effective with fewer surgeries, and it would alleviate years of chronic pain and distress from not knowing the cause. This led us to find a number of proven molecular markers of endometriosis that persist in endometrial biopsies, all of which could be sensed with synthetic biological tools to give a diagnosis in a matter of days.

How can synthetic biology help?

A major hallmark of endometriosis is the rise of progesterone resistance in both ectopic and eutopic endometrial cells, which means both the misplaced growths of cells and the properly placed endometrial tissue lining the uterus. The tissue is, however, very sensitive to the presence of estradiol, the most active form of the hormone estrogen. With this in mind, we designed a pair of genetic promoter regions that can increase the expression of a gene based on the presence of progesterone or estradiol. Synthetic genetic circuits using Boolean (binary) logic can then implement these promoters to identify estrogen sensitivity and progesterone resistance in a cell culture.

Another factor that can identify cells affected by endometriosis is a difference in microRNA (miRNA) levels. miRNA is a form of single stranded RNA that is present in all mammalian cells, but the nucleotide codes and the activities of these strands differ between cell types and cell states. Scientists like Asgi Fazleabas have studied differences in miRNA profiles between the eutopic endometrium in a healthy state compared to a disease state and found a number of miRNA that have different activity levels between the two states. We continued this research in model cell lines to find candidates that could be used in a diagnostic tool under changing hormone conditions.

Endometrial tissue normally functions to respond to a hormone cycle that regulates menstruation, facing estrogen and then progesterone. miRNA levels may change over this cycle as well. Because of this, we needed a tool that would allow us to consider both phases in the cycle. We found that tool in an irreversible recombinase, TP901, which needed to be characterized in more detail in mammalian cells. This part of the project involved better characterizing a part that existed in the Registry already, that part being TP901. We provided all new characterization of the protein and its activity in mammalian cells.