Our circuit design was informed by several meetings with experts in the fields of endometriosis and synthetic biology. 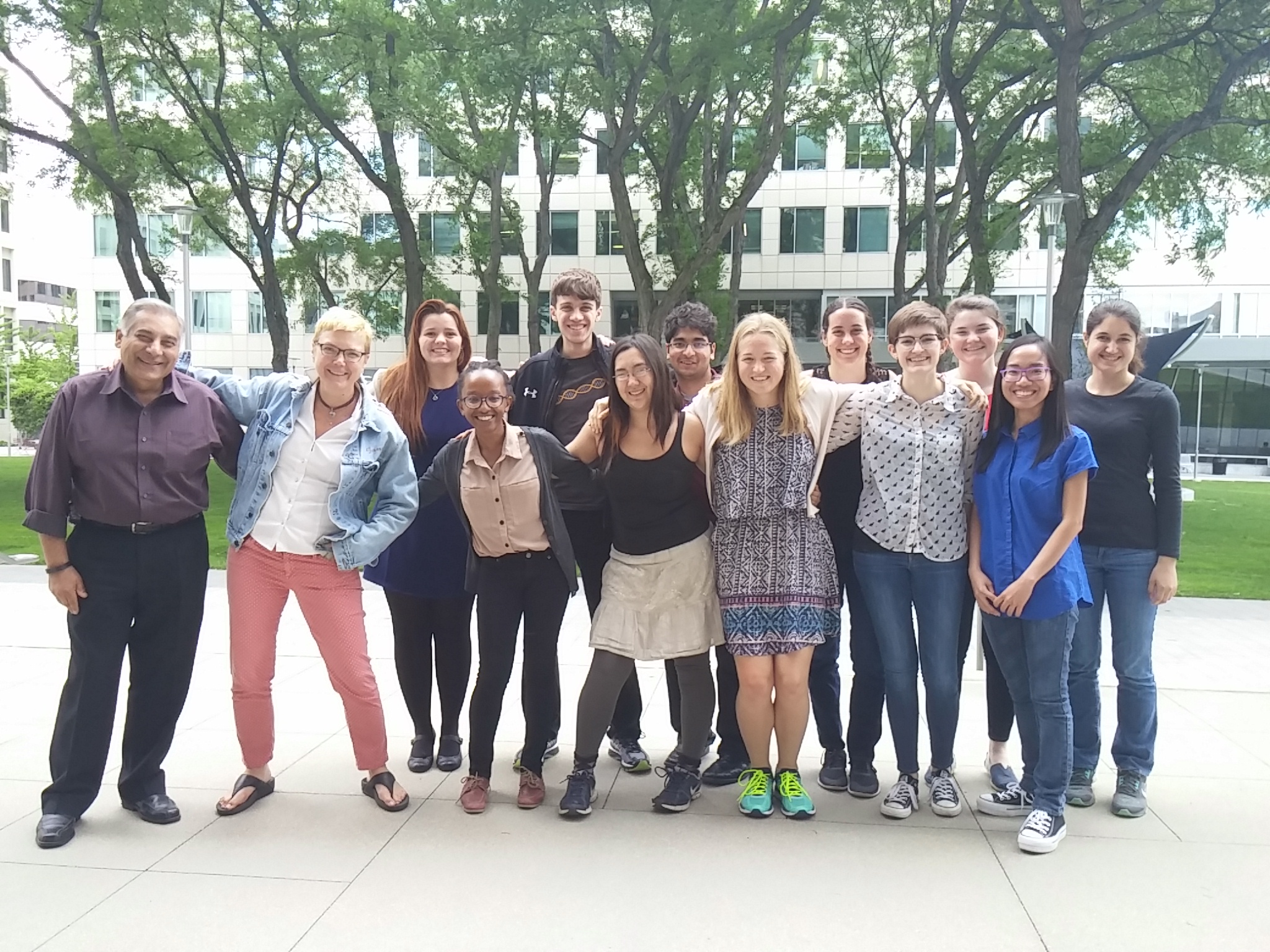 Asgi Fazleabas is a researcher and professor of Obsterics, Gynecology and Reproductive Biology at Michigan State University. He gave a talk to our team in early June, enlightening us about an important characteristics of endometriosis: estrogen dominance, progesterone resistance, and differing miRNA profiles. We learned progesterone resistance is, simplified, due to a lack of progesterone receptors in the cells. Here, “progesterone receptor” refers to the PGR-B isoform, the one that activates due to progesterone and binds to DNA transcription factors. This isoform is downregulated in ectopic endometrial cells. Since progesterone was a biomarker we initially designed our circuit to sense, we searched for another way for our circuit to sense a high level of progesterone present in the cell’s environment. Professor Fazleabas, doing research on a baboon model, found that in endometriosis, estrogen responsive genes are upregulated constantly, while progesterone responsive genes are always downregulated. The reason estrogen is present in abnormally high levels in ectopic cells is due to the way it’s metabolized. E2(estradiol), what we are referring to when we say “estrogen” is metabolized in the cells by a chemical reaction that needs a certain form of progesterone present to occur (research this reaction a little more so you can be more scientific). When progesterone is scarce, a buildup of unmetabolized estrogen occurs in the cell. Additionally, Asgi educated us on the fact that ectopic endometrial cells make a lot of aromatase, the enzyme that catalyzes the chemical reaction that produces E2. We thought: if we cannot sense progesterone levels in diseased cells, maybe instead we can sense for unusually high amount of estrogen?

Linda Griffith is a professor of Biomedical and Mechanical Engineering at MIT and the director of the MIT Center for Gynepathology Research. She advised our team throughout the summer and fall as we made crucial decisions about our circuit and experimental design. Professor Griffith gave us insight to the clinical situation most endometriosis patients are in. Most likely, a symptomatic women who has seen a doctor is already taking some type of hormone regulator, whether it be an IUD or pill. Therefore, the patient is not cyclic like we assumed in our original circuit design and would be in a constant high-progestin state (except for endometriotic lesions, since they are progesterone resistant). To further complicate the challenge of hormone sensing universally across diseased and healthy cells in the reproductive system, endometriotic lesions are consistently producing their own estrogen due to upregulated factors that cause the chemical reaction to occur. Instead, we abandoned the original circuit entirely that assumes all cells go through a normal estrogen and progesterone high phase, and instead decided to sense for: 1) abnormally high levels of estrogen and 2) progesterone resistance during a relative estrogen low phase.

Kevin Osteen is a Professor of Obsetrics and Gynecology at Vanderbilt University’s School of Medicine. In the field of endometriosis, his work contributed to major break-throughs that characterized the role of inflammation in disease epidemiology (Bruner-Tran, et al. 2013). After presenting our experimental plan, he helped us develop a schema for testing the efficacy of our system down the line. This was a large challenge that we faced early on since it is impractical to consider demonstrating the efficacy of our diagnostic circuit in primary endometrial biopsy samples from healthy patients and from patients with endometriosis. This is because it is difficult to get authorization and to develop culture protocols for working with primary cells. Instead, he suggested we use the tert-immortalized human endometrial stromal cells cultured with hormone as our “healthy control.” The endometriotic comparison would be those same cells cultured with inflammatory cues, which his work has found causes healthy cells to mimic the diseased phenotype (Bruner-Tran, et al. 2008). Bruner-Tran, KL. Herington, JL. Duleba, AJ. Taylor, HS. Osteen, KG. Minerva Ginecologica. 65:199-213 (2013). Bruner-Tran, KL. Yeaman, G. Crispens, M., Igarashi, T. Osteen, KG. Minerva Ginecologica. 89:1287-98 (2008).

Harriet Fitzgerald is a PhD student at the Hudson Institute of Medical Research. While visiting MIT, Fitzgerald met with our team to discuss the proper tissue culture conditions our endometrial cells should be grown under. It was at this meeting that we discovered that our cells should be grown in media with charcoal stripped fetal bovine serum (FBS). Our initial experiments with the estrogen responsive promoters indicated that there was some unknown source of basal expression. We learned that standard FBS contains trace amounts of different hormones, including progesterone and estrogen. The charcoal stripped FBS eliminates this problem and decreased the basal activation of our estrogen responsive promoters. Through our discussion with Fitzgerald, our team also concluded that the induction of estrogen, specifically estradiol, should occur 24 hours after transient transfection was performed. These culturing conditions are also applicable to our final procedure to implement our diagnostic tool in an endometrial biopsy.