Through our parts characterization experiments, we have demonstrated the functionality of both our hormone sensing and miRNA sensing techniques in a cell line that very closely resembles human endometrial stromal tissue, tHESC. When we probed this cell line for miRNA levels using miRNA sensors, we were able to prove our capability of sensing changes in miRNA levels in response to hormones in this cell line. By confirming that the L7Ae/k-turn system can regulate the expression of a recombinase under the EGSH promoter, we have shown that we can create the type of hormone-inducible biological ‘latch’ system we had hoped. Our collaboration with the Boston University Hardware Team has verified our ability to culture mammalian cells in a microfluidic device, which is the platform we envision for the clinical application of the functional cascade of the individual components we have characterized. Having done all of this, we tested combinations of parts to observe their combined functionality in model cells.

In order to create emergent functions and logic structure from our individuals parts and devices, we cascaded them together in larger 4 to 5 transcriptional unit circuits. We created both estrogen inducible promoter - repressor cascades in order to create "estrogen low" sensing logic, as well as estrogen inducible promoter - recombinase cascades in order to create "estrogen high" latches. Our attempts with experimenting with these cascades and getting them to function as expected met with only limited success. Some of this can be attributed to natural limitations encountered with creating larger genetic circuits, such as metabolic costs.

(1) Estrogen diffuses into the cell and binds with the estrogen receptor. (2) Estrogen receptors will homodimerize with one another forming an activation complex. (3) Estrogen receptor will bind to our synthetic promoter (4) Production of repressor protein (5) Repressor binds to binding sites upstream of an eYFP reporter (6) Transactivator Gal4-VP16 is constitutively produced (7) Gal4-VP16 binds to sites on pRep (8) eYFP is produced as readout depending upon how active repressors are (9) Constituively active transfection marker hEF1a:mKate allows us to bin and analyze the data.

The Logic of Our pERE - Repressor Cascades

Our estrogen inducible promoter - repressor cascades enable "estrogen low" sensing logic. When estrogen levels in the cell are low, then almost no repressor is made and eYFP is produced.

The first cell line in which we deployed our genetic circuit was ISH, the endometrial epithelial cell line. We had expected eYFP expression to decrease after induction of our promoter - repressor cascades with E2. However, we were unable to resolve a clear fold difference between the uninduced and induced population in any of the pERE#n and TAL14, BM3R1 cascades. This is probably an artifact of poor transfection in the ISH cell line for this experiment (less than 2 percent transfected after cationic lipid transfection), which leads to erratic jumps in the data after binning by constitutive marker. In the future, we may want to try other modes of transfection for ISH to improve the transfection efficiency. 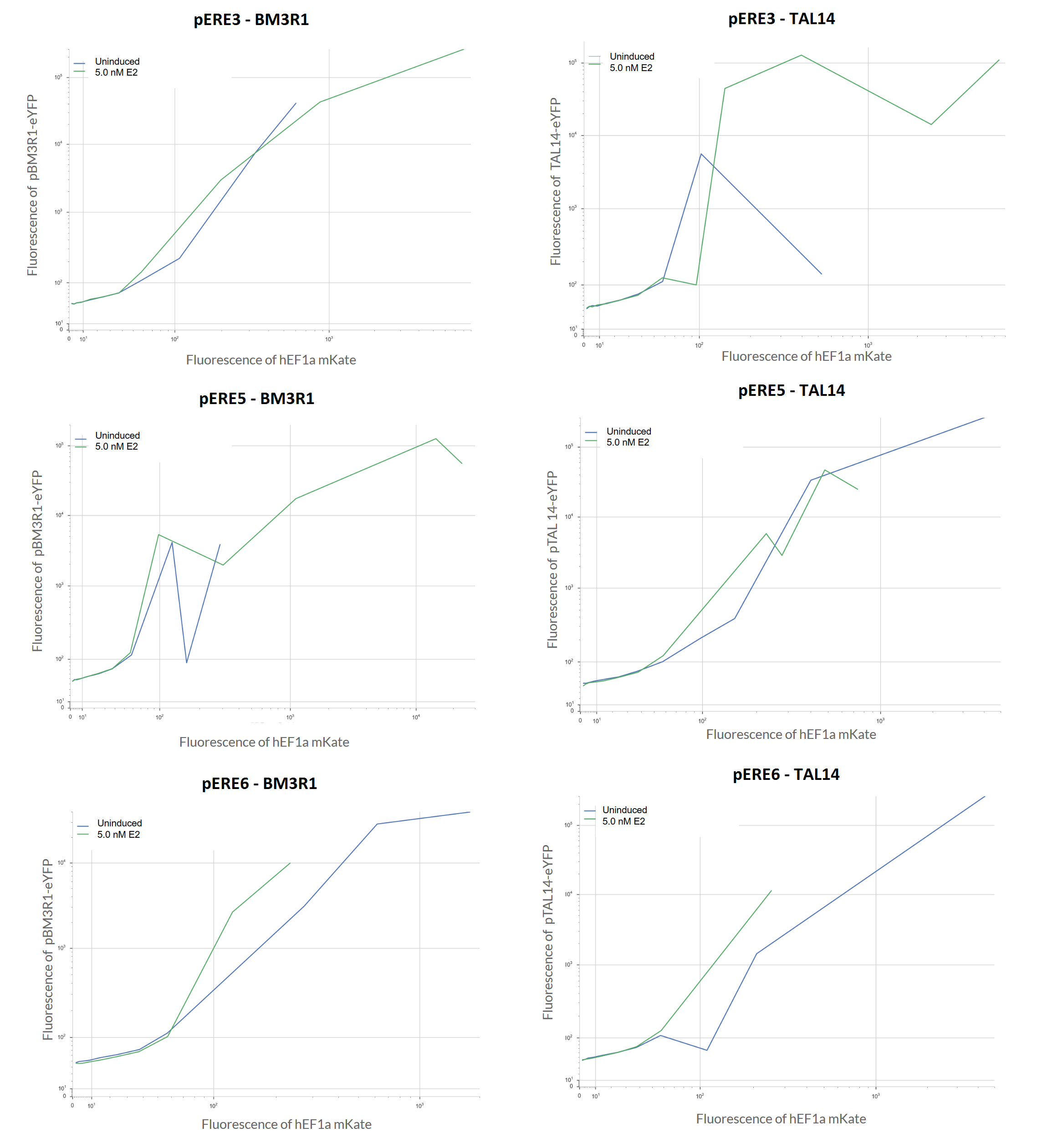 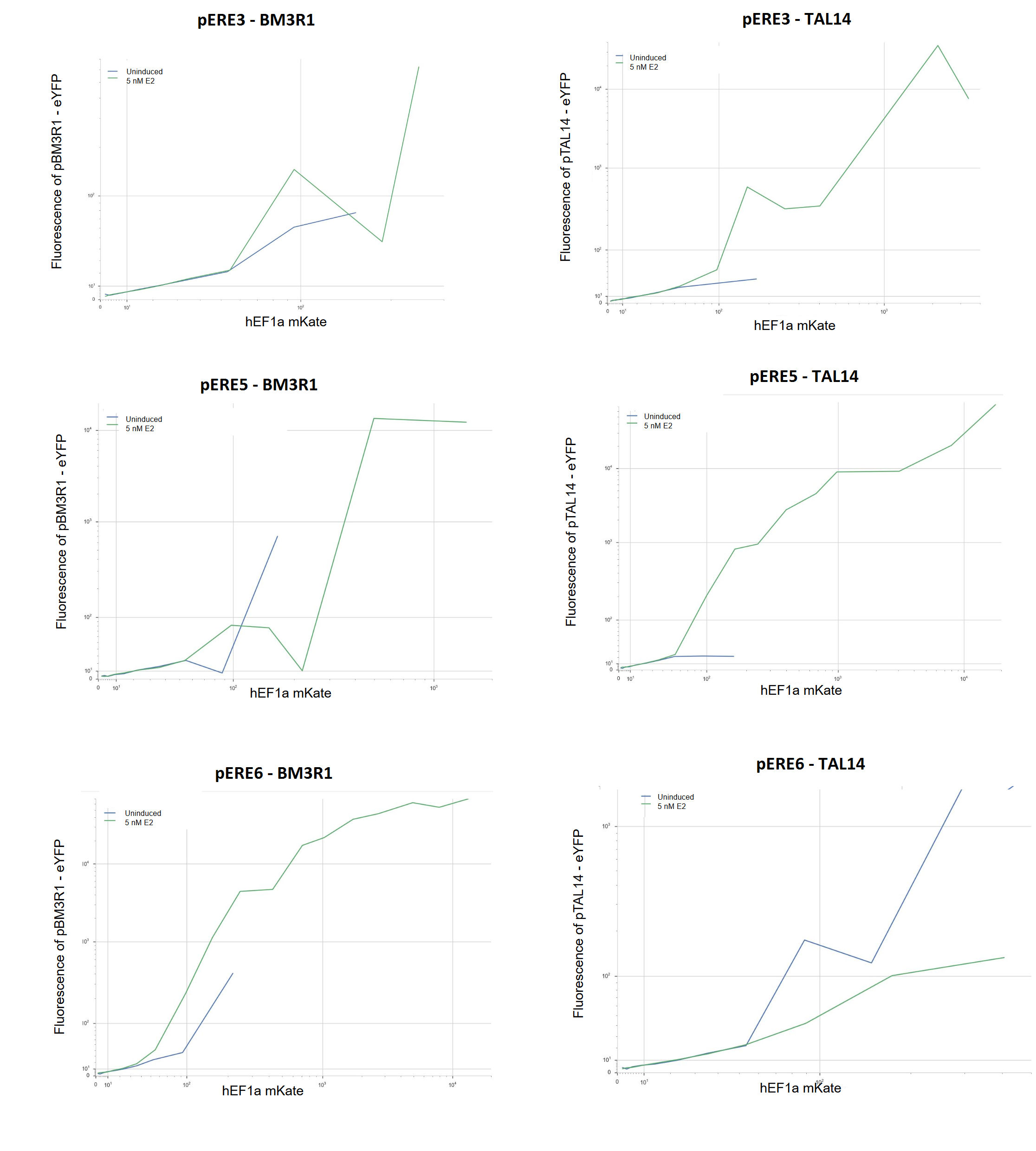 Similarly, we had expected eYFP expression to decrease after induction of our promoter - repressor cascades with E2. However, we were still unable to resolve a clear fold difference between the uninduced and induced population in any of the pERE#n and TAL14, BM3R1 cascades. Given more time, we would like to explore whether transfecting our entire circuit on one plasmid instead of five separate plasmids would lead to better results.

We also tested activation of recombinase TP901 under estrogen responsive promoters pERE5 and pERE6 in the MCF7 cell line. Upon activation of TP901, the inverted eYFP gene flanked by recombinase recognition sites is flipped to the correct orientation and expresses fluorescence.

We have previously demonstrated activation of TP901 under the inducible promoter EGSH, which is activated by transactivator VgEcR along with estrogen analog PonA. Despite high levels of TP901 basal expression, we observed a clear difference in activation between the induced and uninduced wells. We expected to see similar results in this experiment with TP901 under estrogen inducible promoters.

The Logic of Our pERE - Recombinase Cascades

In order to test this cascade, we transfected MCF7 cells with pERE5: TP901 or pERE6: TP901, the inverted eYFP - recombinase site plasmid, and constitutively active BFP as a transfection marker. We induced half the wells with 5.0 nM E2 in order to compare on vs. off states of the promoter. 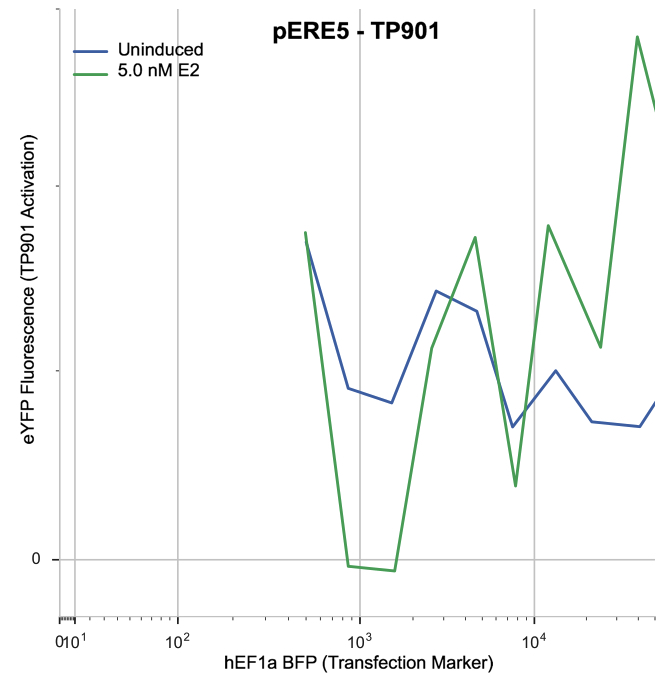 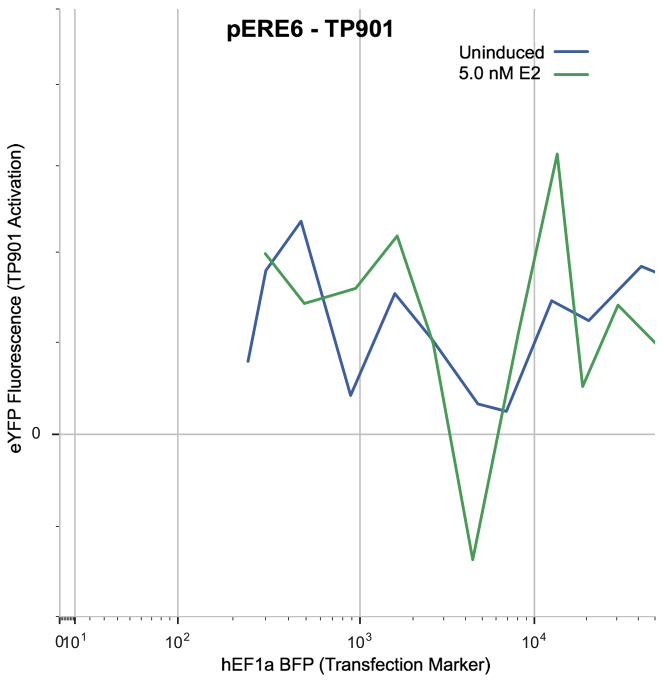 Unfortunately, we had poor transfection efficiency in this experiment, and thus the results are inconclusive. The data showed no clear fold difference between the induced and uninduced populations. We would like to try this experiment again in the future to get better results.