L7Ae, an archaeal ribosomal protein, binds with high affinity to RNA motifs called kink-turns (k-turns), found in both archaeal and eukaryote RNAs [1][2][3]. The L7Ae protein sequence is divided into three structural regions, consisting of a highly conserved RNA-binding region (RBR) flanked by less conserved N-terminal and C-terminal regions [2]. Variation in the terminal regions could dictate RNA-binding specificity of different homologs of L7Ae protein [2]. When a k-turn motif is inserted into the target mRNA upstream of the open reading frame, L7Ae acts as a post-transcriptional regulator by preventing the ribosome machinery from performing translation[1][2][3]. The strength of the repression can be controlled by varying the distance between the k-turns and the 5’-end of the mRNA or by changing the number of the k-turn motifs [1]. 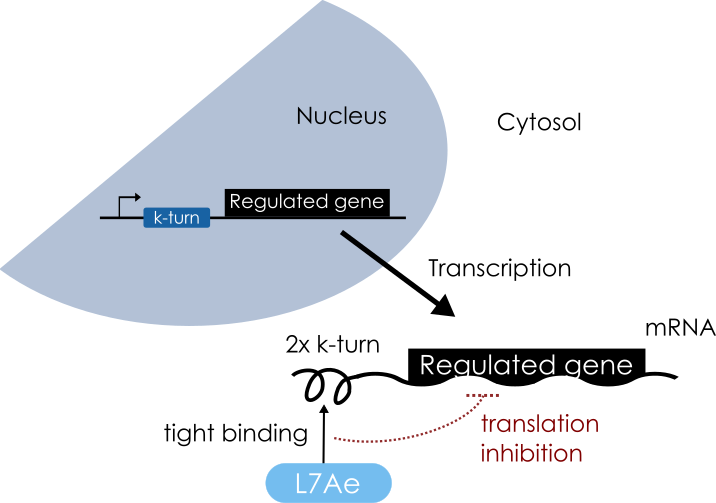 We talked with graduate students and postdoctoral research associates in Prof. Weiss' lab to gain more information about the L7Ae/k-turn repressing system, and we learned from them that high concentration of L7Ae could potentially be harmful for mammalian cells since mammalian cell cultures have been showing unhealthy morphology under high concentrations of L7Ae. Thus, we designed an experiment to examine the toxicity of L7Ae to HEK293.

We put L7Ae under the Dox-inducible promoter pTRE. Higher amounts of Dox (a small molecule inducer) would increase the amount of L7Ae in the cell. The reporter gene for the amount L7Ae produced was pTRE:mKate. Yellow fluorescence (hEF1a:eYFP) was the transfection marker. We induced the cells with different amount of Dox concentration 24 hours after transfection. We trypsinized and harvested the cells for flow cytomertry analysis 24 hours after induction. During the preparation for flow cytometry, we stained the cells with SYTOX blue, a DNA-binding stain that cannot pass through an intact cell membrane, for live/dead cell analysis. 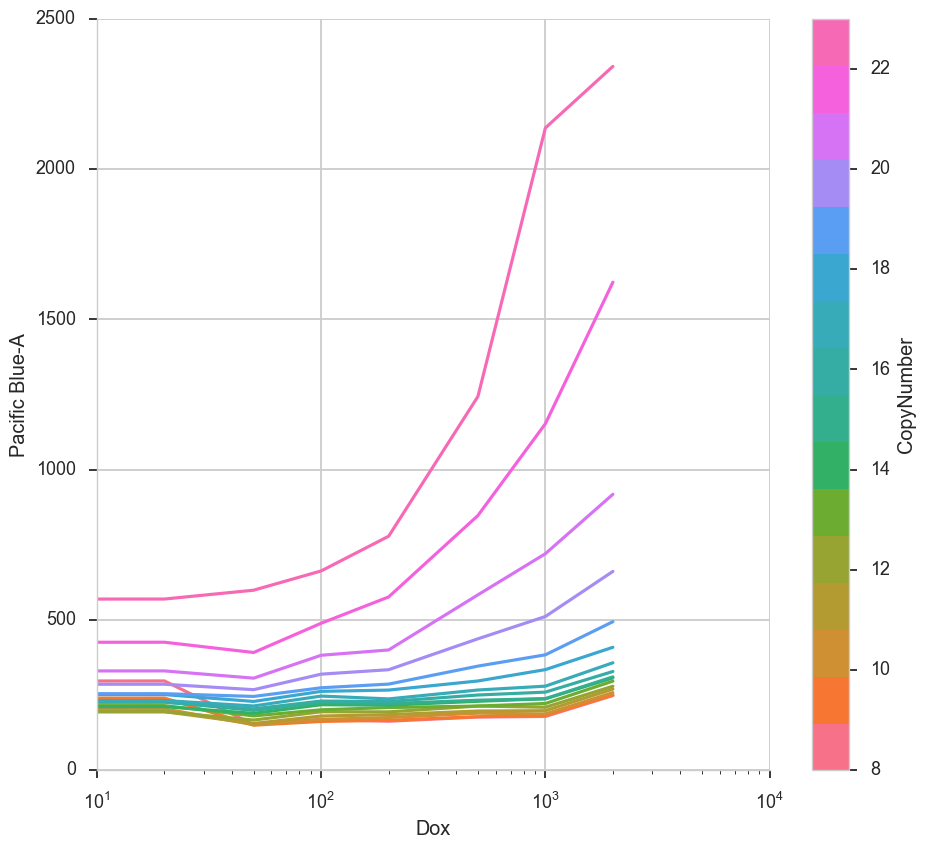 Using recombinases as biological 'latches' gives our genetic circuit the 'memory' necessary for identifying the disease's temporal specificity. Since the recombinase is controlled by an inducible promoter, however, leaky expression of the promoter (activation without input signals - disease biomarkers) could lead to unwanted activation of the output gene and thus a false positive diagnosis. By putting k-turn motifs in front of the recombinase gene, we hope to eliminate leaky expression of the recombinase when the system is not activated.
We designed an experiment to examine the repression level of the L7Ae - kink turn system on the expression of an output gene (eYFP - enhanced yellow flourescent protein), which is regulated by TP901 (a serine recombinase).

We used two inducible promoter systems - pEGSH/PonA and pTRE/Dox - in this experiment to control the expression of two genes, L7Ae for tuning the repressing level and TP901, the recombinase. The pTRE/Dox system controled the expression of L7Ae. We induced the cells with Dox at the same time as transfection because the repressing system needed to be activated before TP901 recombinase was induced by PonA/pEGSH.
Additionally, including all the neccessary genes (TP901, flipped eYFP, L7Ae, VgEcr-RXR, and rtTA) and the reporter flourescent genes, the total number of plasmids went up to 7 (or 8 with the dummy DNA - pDONR). We were reaching the upper limit of the number of plasmids that can be cotransfected using lipofection. After asking for advice from other members of the Weiss lab, we increased the ratio of viafect:DNA from 1ul:500ng total DNA to 1.5ul:500ng total DNA. 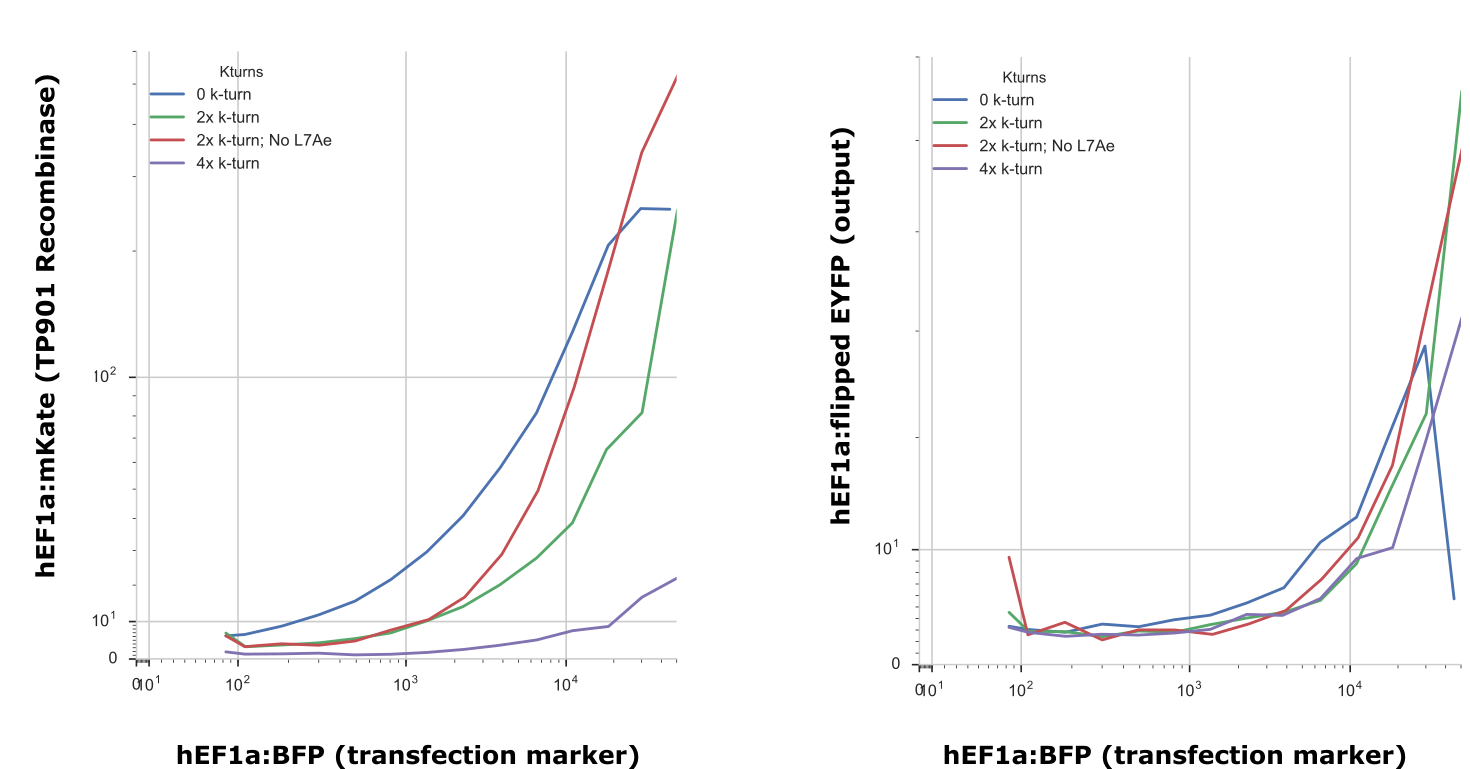 When we compared varying numbers of k-turns with constant amounts of Dox and PonA, we saw that the amount repression of mKate expression (and thus TP901 expression) increased significantly as we increased the number of k-turns for both the uninduced and induced states of pEGSH. While the difference between the amount of yellow fluorescence (and thus the amount of recombination) for 2 k-turns and 4 k-turns was less pronounced, we still observed a noticeable decrease in recombination when k-turns were present compared to when they were not present. We concluded that increasing the number of k-turns over the range we considered led to tighter repression by L7Ae.

Back to Recombinase Overview Page