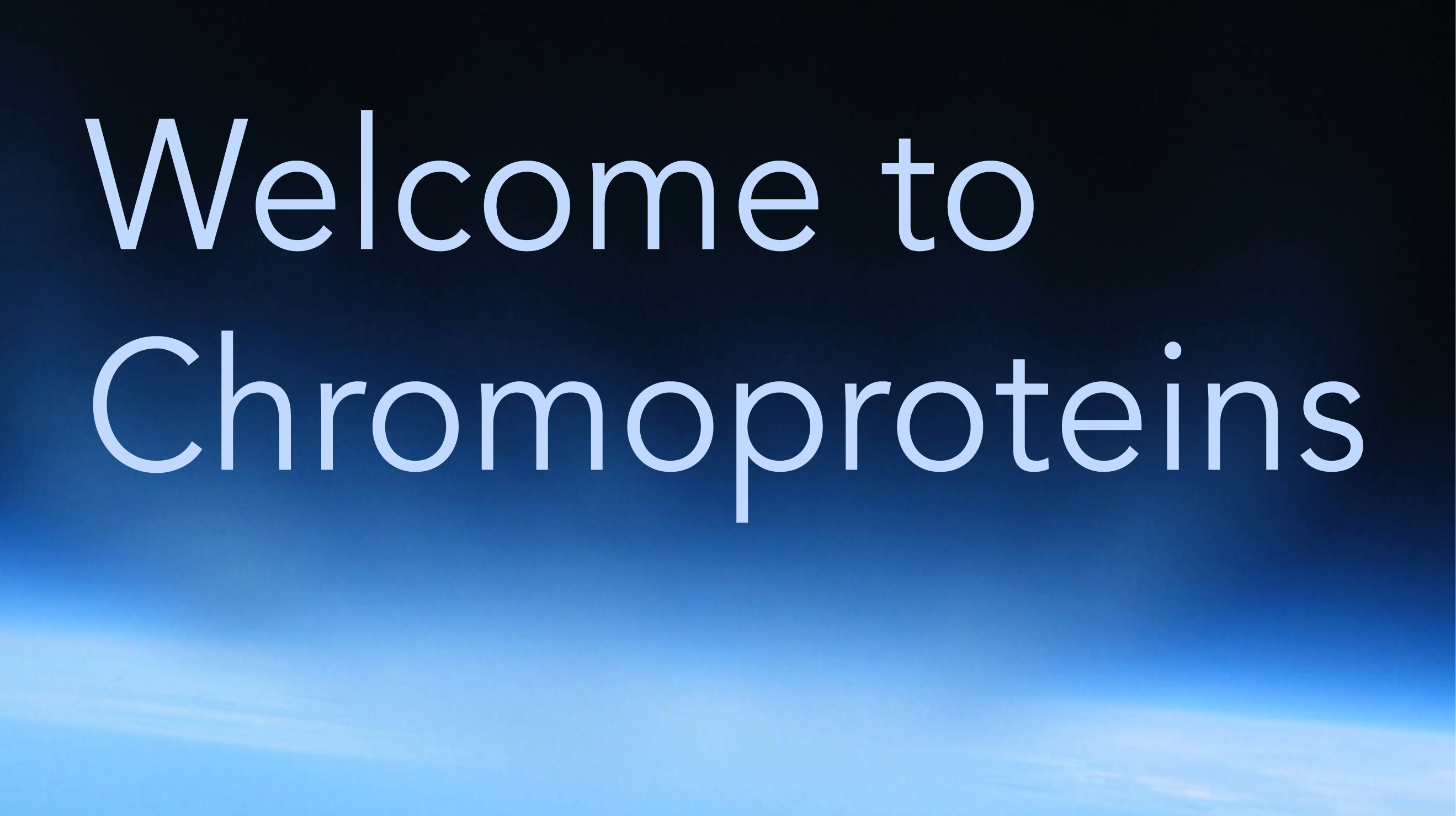 In planetary exploration, monitoring temperature changes in the atmosphere is important for predicting weather patterns and atmospheric stability. At different heights above the planet’s surface, the temperature can vary drastically. The way that the temperature changes from hotter to cooler than back to hotter temperatures can be used to predict how weather and wind patterns will move across that region. This is helpful to know in planetary exploration because it can help predict the weather that various rovers or exploration outposts would have to deal with without relying on expensive satellite equipment. Additionally, the vertical temperature profile of a certain region of a planet’s atmosphere can be used to predict how easily a payload will fall through the atmosphere and land on the planet’s surface [1].

To test our chromoproteins in a closed system that did not allow them to interact with anything in the air, we spun down 5 mL cultures of each of our chromoproteins and added 30 µL of the pellet cells to a PCR tube along with 1 µL of 0.165 M EDTA. We then heated these PCR tubes for 5 min at a starting temperature of 40 °C, removed them from the thermal cycler, took a picture, then returned them to the thermal cycler for 5 more minutes at a temperature that was 5 °C higher than the previous. We repeated this process until we reached 100 °C. As can be seen in Figure 2, groups of chromoproteins lose their color at specific temperatures. Additionally, CupidPink and DonnerMagenta change from pink to purple at 70 °C and 80 °C respectively.
Interestingly, we also observed that if there were certain cultures that were not showing color on a particular day, the heat treatments as described above were able to cause the color we would have initially expected to appear (Figure 3, 4, and 5).
Using the results of the experiment above, it was possible to build a thermometer from the select groups of chromoproteins that respond to different temperatures. Shown in Figures 6 and 7 is a prototype of how that would work. Until the temperature reaches the temperature indicated on the right, the color remains constant. Here is an example of how the thermometer would look at 80 °C (Figure 6) and at 100 °C (Figure 7).
After the cell lysate heat tests, we moved towards testing the cell lysate in an exposed air environment. This was done based on the idea that the color change we were seeing was dependent on the interaction of water molecules with the barrel of the chromoproteins. Therefore, we hypothesized that in the exposed air system, the water molecules would not be trapped with the chromoproteins and we might see color change occur sooner. To test this we set up an apparatus that would heat a glass petri dish evenly and allow us to take a video of the cell lysate as it was being heated up as shown in Figure 8 to the right.

Twelve chromoproteins that were expressing good color in our cultures were selected for this assay and can be seen below in Figure 9. After this, the glass petri dish was removed from heat and 20 µL of DI water were added to each of the chromoproteins. This was done on the theory that the chromoproteins had not denatured, but rather had lost their color because all of the water molecules which were supporting the structure of their barrel had been driven out by the heat. As can be seen in the image below, some of the chromoproteins regained color when water was added, but this color is different from the starting color. This could be due to the fact that the heating caused the chromoprotein structure to destabilize to a lower energy structure which causes it to have a different color when the water is added to support the barrel.
In order to investigate the role that water molecules play in the color change we were observing in our chromoproteins in response to heat, we used a lyophilizer to remove the water from the chromoproteins without heating them. A lyophilizer is a device that operates at sub freezing temperatures under a vacuum which causes water to move directly from the solid phase to the vapor phase. This vapor is then pumped out of the system. Below is an image of two chromoproteins (PrancerPurple and ScroogeOrange) inside the lyophilizer chamber (Figure 12). After an hour in the lyophilizer, the filter paper was removed from the chamber and photographed (Figure 13). Water was then added to to the right column of the filter paper which caused the color to return (Figure 14) as can be seen by comparing the top and bottom rows of this image. These results show that while color loss does occur when water is removed from the system, it does not have the same effect as heating the sample. In the heat testing experiments, PrancerPurple changed irreversibly to pink when heated whereas in the lyophilization experiment, it regains its color fully. This supports our hypothesis that the color changing in response to heat is dependent on both water loss and a structural change of the protein itself due to heat.
Similar experiments were done with the AE Blue-CBD fusion protein. With this protein, we saw that the blue color changed from blue to purple. This purple color immediately went away when the sample was removed from the chamber, suggesting that our hypothesis that the AE Blue chromoprotein’s color changing capabilities are dependent on the presence of water inside the barrel. To further confirm this, we tested how the AE Blue-CBD fusion protein would respond to heat in a closed PCR tube. Since the PCR tube prevents water from being released from the system, the water molecules that support the barrel of the chromoprotein cannot be driven out when the tube is heated. Because of this, we no longer see the color change from purple to blue. Instead the chromoprotein turns a bluish-green color, likely indicative of the protein simply denaturing in response to heat. This is a picture of the AE Blue-CBD protein before heat (Figure 15) and this is a picture after the PCR tube was heated to 80 °C for 5 mins (Figure 16).

The extracted protein was concentrated using microfiltration tubes then allowed to dry on cellulose sheets which had wax wells printed on them. These cellulose sheets with the dried chromoprotein were then placed in a preheated oven and the temperature was increased at five minute intervals until a temperature change was observed.

In collaboration with the Stanford High Altitude Ballooning Team, we field tested our AE Blue-CBD fusion protein at a high altitude. This AE Blue-CBD fusion protein was extracted from the cells that were expressing it and purified using dialysis to ensure that only the fusion protein remained for this experiment. Prior to the flight we obtained permission from the US Environmental Protection Agency and iGEM HQ. It is important to note that nothing living was sent into the environment to be tested and that our sample was recovered. No environmental contamination occurred as a result of this experiment.

Using our extracted fusion protein, we plated 20 µL drops onto a cellulose sheet that had had wax wells printed onto it (Figure 31). Every well seen in this image is from the same chromoprotein. This chromoprotein is the same as was seen earlier in the NASA logo heat test. Because there are higher levels of UV radiation in the atmosphere than are in our lab environment, we used UV-opaque and UV-transparent glass to cover the top and bottom row of the grid. The center row was left exposed to the elements as a control. These were then mounted onto the payload of the Stanford High Altitude Balloon Team’s balloon (Details in Figures 32, 33, and 34) and were readied for launch!


A GoPro was mounted on the payload as well in order to catch inflight data. In the image to the right, taken at 10000 feet from the surface, the chromoproteins can be seen starting to change their color from blue to purple (Figure 35). A tracking device placed on the balloon allowed for the payload to be recovered once the balloon had burst. The image below was taken of the fusion proteins immediately after payload recovery (Figure 36). As can be seen, the once-blue fusion proteins are now purple. This purple color was persistent for six hours before eventually returning back to blue which is unlike previous heat tests in that usually the blue color comes back rather quickly.
This could have occurred for a variety of reasons. The simplest explanation is that the exposure time to heat stress was much longer in the field test than in the lab. Usually our heat test experiments last anywhere from 5 to 30 minutes of constant heat exposure. As a result, it might be easier for the chromoproteins to regain their structure afterwards. Because all three of the levels of UV-exposure that were tested had the same degree of color change, it seems unlikely that the exposure to UV was responsible for the prolonged color change we witnessed. However, it is possible that even the UV-resistant glasses we used were not enough to block out trace amounts of UV and that these trace amounts of UV destabilized the structure of the chromoproteins in such a way that the prolonged color change occurred. Below is a video capturing the flight (Video 3).
Video 3: A video documenting our chromoproteins' flight.
References