As part of our summer experience, we went on plenty of adventures and met cool people! 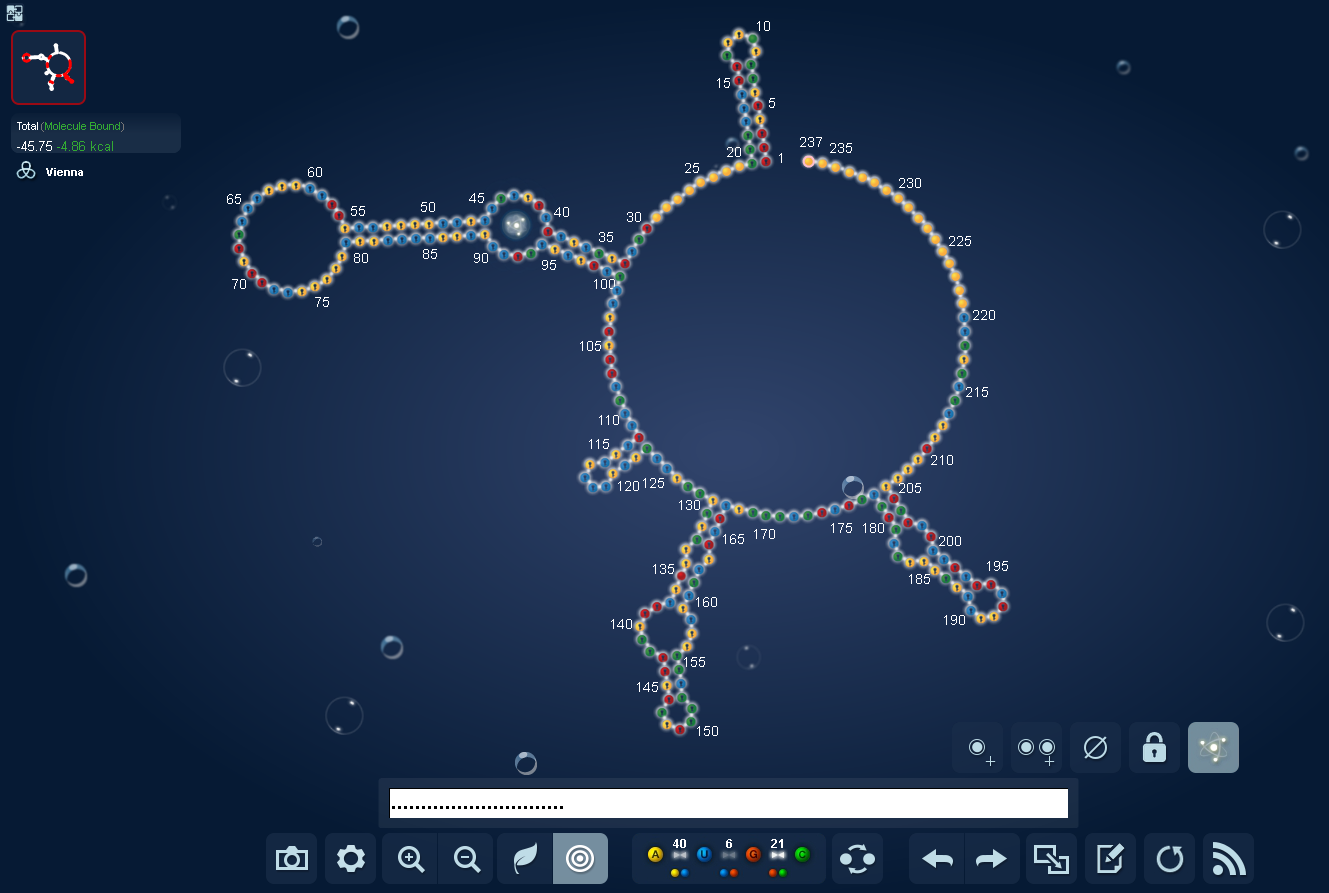 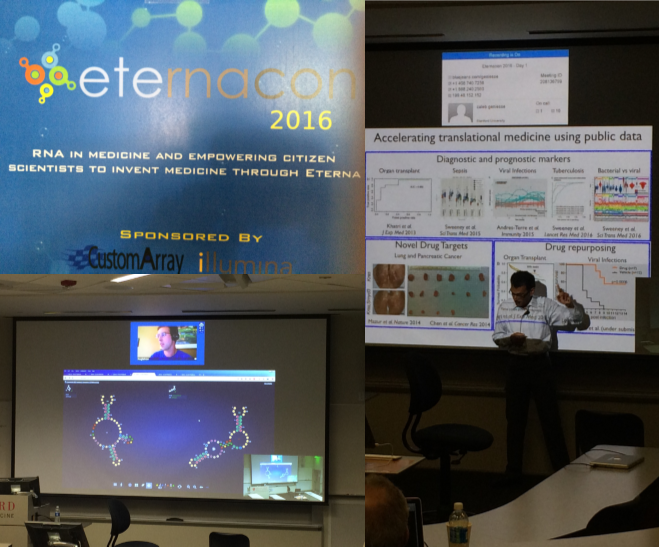 EteRNA online computer game that allows the general public to "solve puzzles to design molecular medicines" by folding their own RNA.
A lot of the work for Biosensing went into the design of our functional oligonucleotides. We experimented with many secondary and tertiary folding softwares to predict their affinity for molecules in binding pockets, but after consulting experts like Christina Smolke, we eventually determined that was not enough. We sought out crowd-sourcing as a means to optimize our aptamer designs. eteRNA is an interactive platform created by Stanford and Carnegie Mellon University that essentially turns RNA folding into a game. Currently, this user-base is attempting to tackle the lingering world health problem of tuberculosis. The site's many features allow users and players to have an in silico lab experience. We participated in the eteRNA Convention on July 16th-17th at the Li Ka Shing Center at Stanford. Mike got quite into the game and is now ranked top 1000 in the world! Check out this example of the IRES-mediated translation biosensor and see if you can meet the thermodynamic constraints of -11.7 kcal/mol necessary for proper folding of the Theophylline aptamer!

We participated in weekly gatherings with a group of biologically-inclined hackers known as BioCurious. We aligned with their mission of creating an open space for biotechnology around Silicon Valley, much like iGEM strives to promote standardized synthetic biology. Not only did we help out with ideation and prototyping a 3D BioPrinter (a device used to print out actual biological objects, such as a leaf), but we also received constructive criticism from biotech experts about our own ideas at NASA. 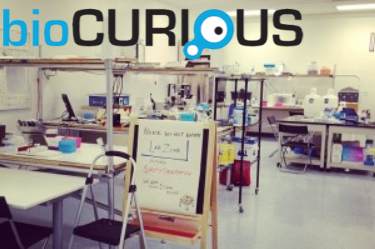 BioCurious DIY biolab where they have assembled the tools for any member of the public to participate in grow plant cultures, conduct molecular biology experiments, and even use a functional 3D-printer.

To get some tips on how to design our Wiki and leverage computational tools for our projects, the ladies on our team went to the all-female Spectra Hackathon. Hosted at YouTube, we listened to several prominent guest speakers discuss women in tech and attended workshops teaching technical computer skills, such as functional app prototyping, website building, and graphic design on Illustrator. Not only was this a great source of team bonding for the ladies of the Stanford-Brown iGEM team, but we put our newfound skills to use on our Wiki.

On the week of the anniversary of NASA's Lunar Landing, we nerded out! First we tackled Kuma Escape Room's "Utopia" in Santa Clara. This was an intensive team bonding activity that involved solving a locked mystery room in under an hour. Our team of 12 conquered this task of puzzles in the 2nd fastest time in history! The next day, NASA showcased a premiere showing of Star Trek Beyond, which we hoped would make our team dynamic live long and prosper. Finally, we toured the world's largest wind tunnel at NASA Ames and were blown away! 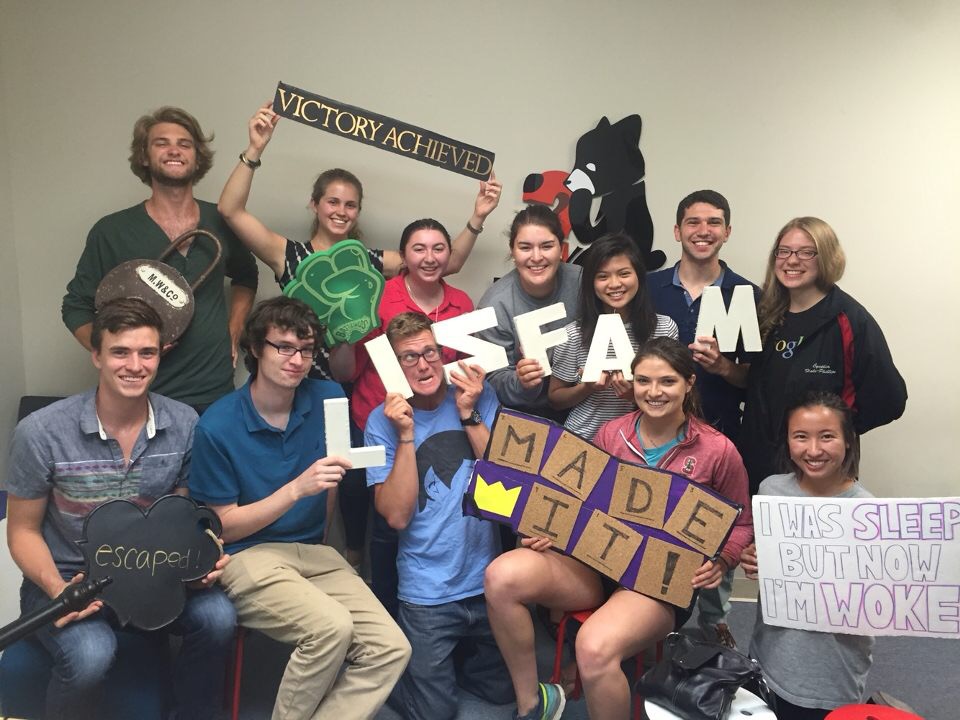 Most of the 2016 iGEM team plus special representatives from Stanford-Brown iGEM 2013 and 2015 after we successfully escaped the room. 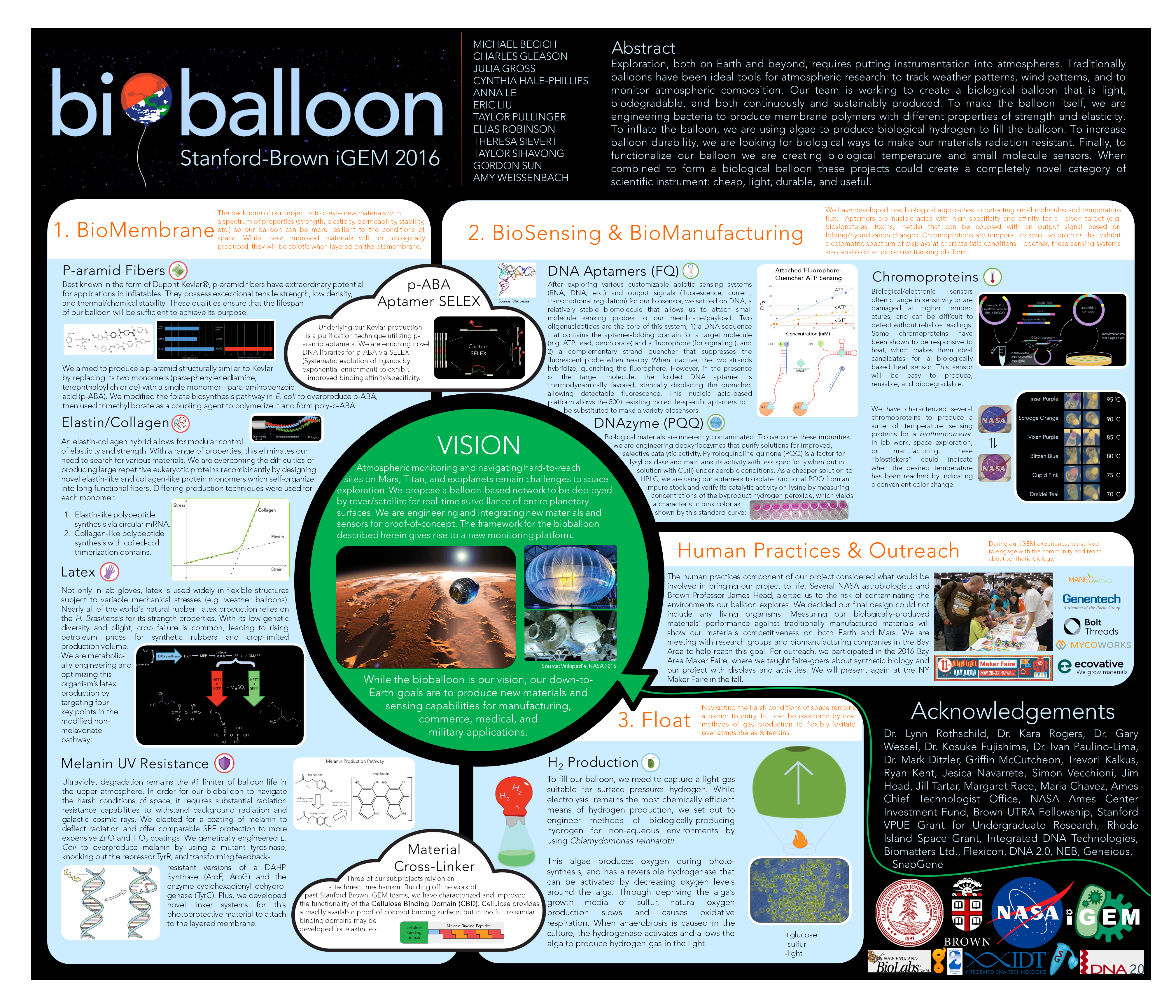 This is the poster we presented at the Stanford REU poster session.
We participated in the Stanford BioE REU Poster Symposium on August 5th to interact with other undergraduates do other exciting research in bioengineering and bounce off ideas for how to finish some of our projects in August and September. In addition to the poster, we also presented our full talk at the REU speaker's panel. This allowed us to compare our work to projects done by other undergraduates and graduate students of Stanford calibre.

We had to pay a few visits to our next door neighbor, Google. Especially since they are such a crucial member in information technology and have special ballooning projects within Google X, we found some friends who were willing to give us a tour of the Googleplex. During our visit we learned all about the history of the company, the work that they do, and the many ways in which their research and innovation is working to shape everyone's future. 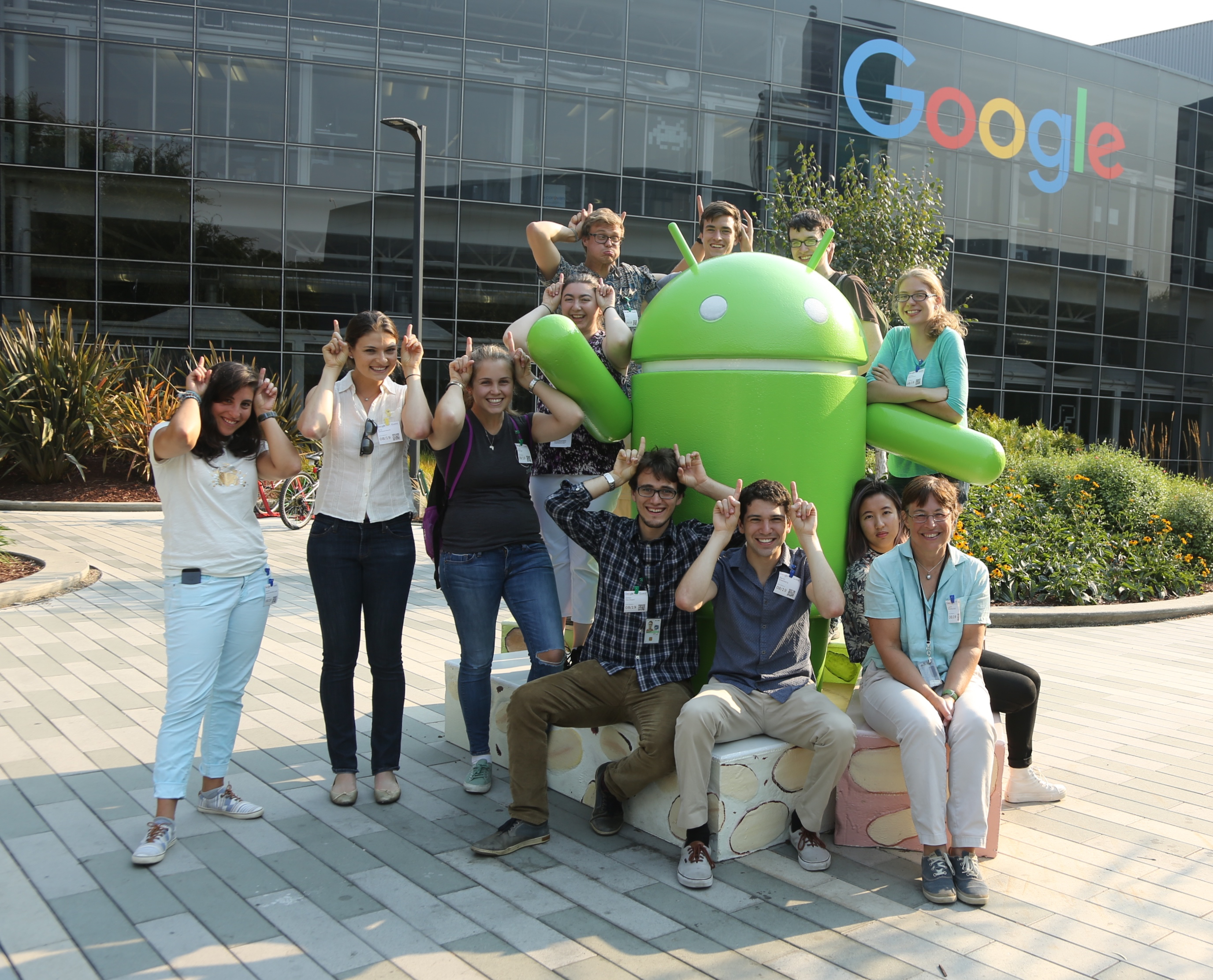 Team, alums, and advisor pose in front of some of Google's iconic statues. 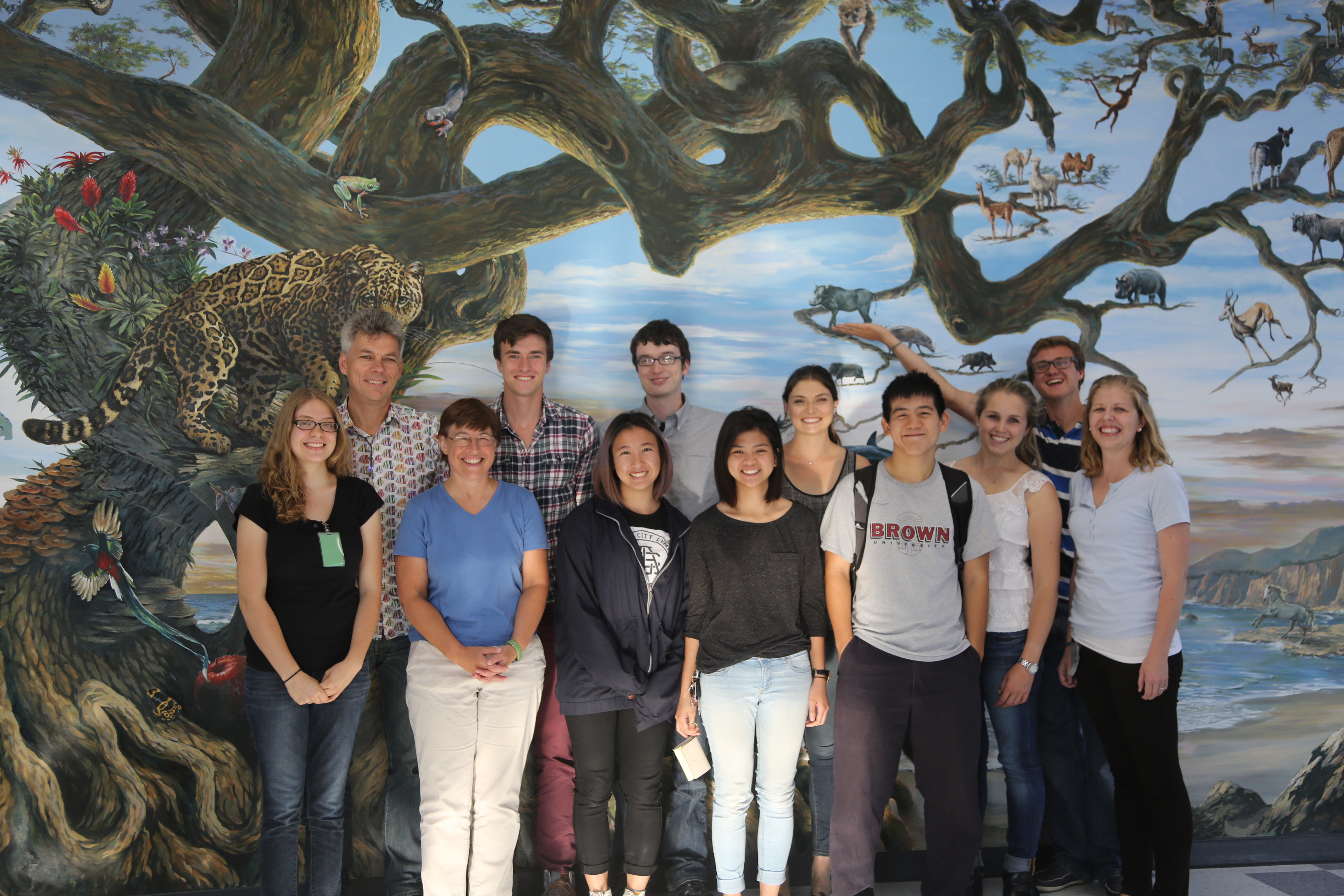 Team, alums, and advisors pose with a DNA 2.0 representative in front of the Tree of Life mural in the DNA 2.0 cafeteria.
DNA 2.0 was kind enough to sponsor our chromoprotein investigations by giving us full access to their PaintBox suite of proteins. When we had characterized them, we paid a visit to their headquarters across the Bay to share our results and give our full presentation. While there, we were fortunate enough to get the full tour and see firsthand the inner-workings of a prestigious biotechnology oligo-synthesis company.