The purpose of this script is to expedite the process of protein DNA sequence optimization and Gibson Primer design for Gibson assembly reactions. The files for the script can be found either here on github or be downloaded individually from the IGEM database below.

Note because IGEM does not support .py file extensions, you will need to remove .txt from the extensions of all of the downloaded files from the links below and append ".py" to the end of (1) seq_analyzer, (2) seq_tools, (3) input_tools, and (4) format_tools (i.e. "seq_tools.txt" becomes "seq_tools.py.") No further formatting is needed for the github link download.

In order to run the program, the user has to provide a text file containing the sequences in need of optimization and/or primer design. Each sequence should be included on a separate line; any blank newline entries and spaces will result in a processing error. The sequences should also contain no other characters other than that representing nucleotides (A,T,G,C) or amino acids (G,A,L,M,F,W,K,Q,E,S,P,V,I,C,Y,H,R,N,D,T,*).

For protein optimization, sequences in the input file are not limited to only amino acid or nucleotide sequences--the user can input either and the program will recognize the sequence type and process it accordingly. This is limited however in cases where the only amino acids in the sequence are alanine, threonine, cysteine, and glycine, since the single letter code for each amino acid is also found in the single letter nucleotide representations. For these cases, the program will be unable to distinguish between an amino acid or nucloetide sequence--this however can be corrected by putting a "*" at the end of an amino acid sequence.

Sample input and output files are also included in the repository and are listed below:

Once the user input files have been formatted properly, the script can be run.

Before the script can be run, make sure you have downloaded the following files to a directory of your choosing:

These files contain the functions needed by the main script to run the algorithms, and also contain libraries for the program to read from that contain codon and nucleotide pairing maps, and restriction site sequences.

which are codon frequency use tables for their respective organisms. If a different codon table is desired, the user can create a textfile with each row (codon) arranged as such:


To run the script, you will need to open terminal or command prompt on your computer. For windows, press Windows+R, and then type “cmd” into the run bar, and hit enter. On mac, hit Command+Space, type “terminal” and then hit enter. This should open a command line interface in which the program can be run.

Commands are input into the program in the following format:

in which the arguments are:


Both commands above do the same thing, except the first command designates an output file called output and makes the operation run at 10 seconds between each step.

The script will then run and depending on the operation selected ask for appropriate user input and at the end output a text file with the results.

The script will then generate the junction between the fragments to calculate the optimal homology overlap and primer extension to match the temperature and salt requirement. The process of gibson primer design is indicated in the figure below, adapted from NEB. These will then be output in a text file in a readable format. 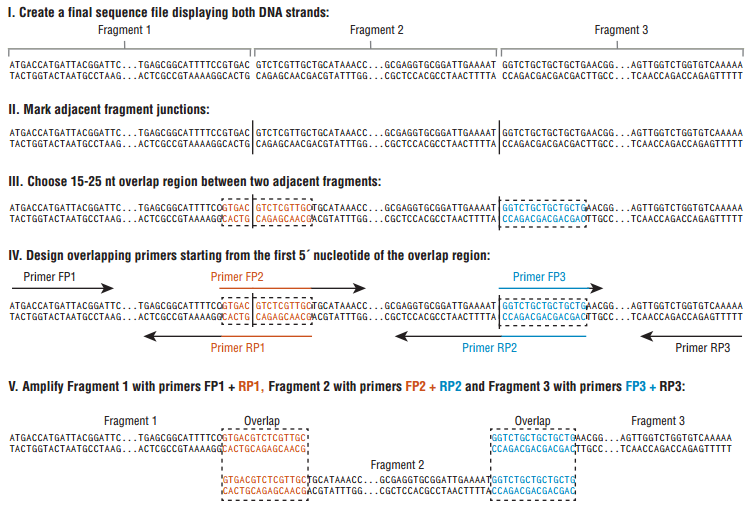 If there are any questions and/or comments concerning the program and its usage, please let us know!