What is life? What is reality? The image that device like phone and computer presents is virtual, while real substance like our hand is reality. Referring to the situation of human based interaction with virtual world, we would prefer calling it augmented reality than virtual reality. When we print a file on a paper, it’s a reality-based process. Inputting the content through virtual Office software like Word, then transferring it to an actual paper with the help of a printer, an augmented reality system has been established, consisting of human, computer and printer. This system serves reality in purpose. 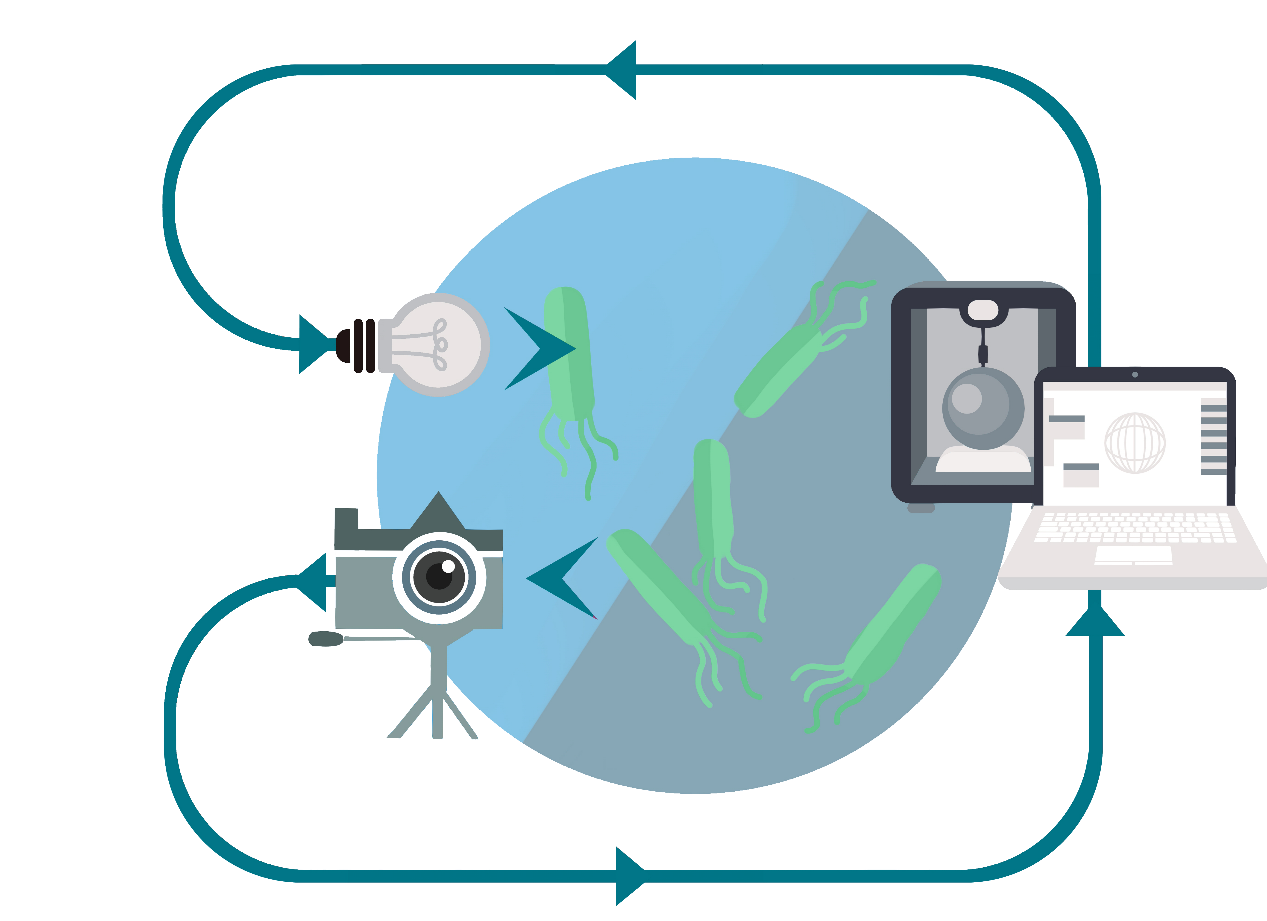 In the AR system we forge, the bacteria and the computer form an augmented reality system. Through this system, we are able to regulate the status of bacterial growth and lead them toward a specific growing goal. There are some rules that bacteria obey when they grow in reality, which are described as function f(x1) where X1 refers to the external signal input, in other words, the preset pattern. In the computer, f(x1) is transferred into rule g(x2) where x2 refers to the input signal the computer receives, to be specific, the growing state of bacteria that the camera captures in the system. When these two elements interact with each other, f(x1) can be seen as x2, becoming the input signal of g(x2). Similarly, g(x2) can be seen as x1, the input signal of f(x1).

As a consequence of the overall interaction between the two elements, the kinetics of f(x1) belongs to target dynamics k(t), which means it can produce the pattern of real-time control over cell growth and motility. The consequence of dynamics will achieve certain goal, which is to guide the bacteria growth by projecting given wavelength of light to the surface of bacterial cultural medium as a feedback from the computer analysis. At present stage, we take growth and diffusion law of bacteria as primitive function f(x1), and computer regulation as virtual function g(x2). The combination of them makes it possible for the bacteria community to grow towards particular shape. 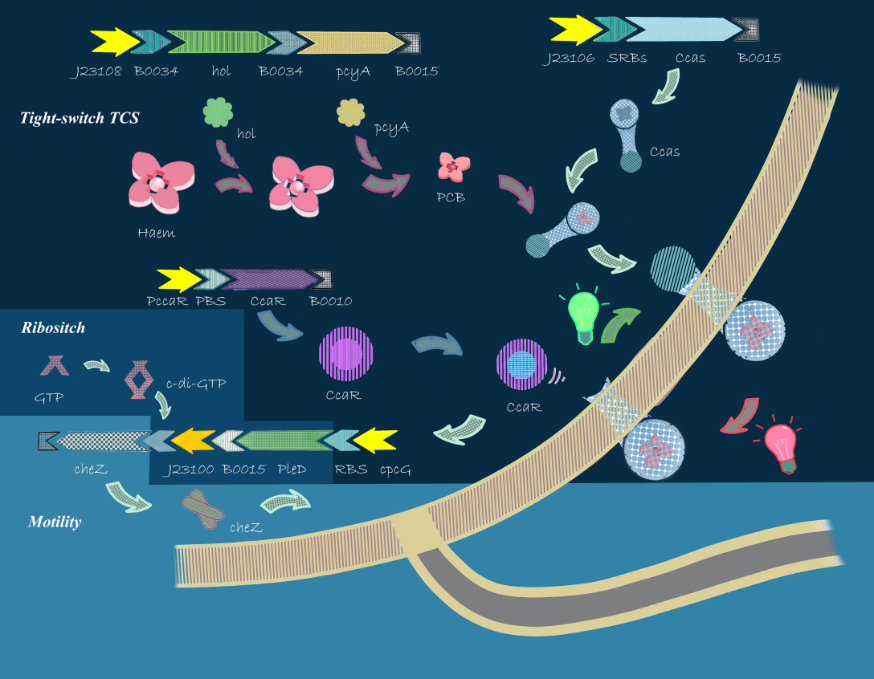 This season, we constructed a gene circuit which could control motility of Escherichia coli via green and red light. To make it simple, green light makes bacteria to move and red light makes it stop, exactly like the traffic light.

In bacteria, when green light is on, CcaS-CcaR light-switchable TCS is phosphorylated, activating promoter PcpcG2 and the subsequent expression of PleD. PleD turns GTP into c-di-GMP, which in turn switches on riboswitch and facilitates the expression of cheZ, an important protein that makes the bacteria swim, which is the manifestation of motility.

When red light is on, bacteria stops swimming, followed by the inhibition of signal pathway.

For the light sensing part, we utilized CcaS/CcaR light switchable two-component signal transduction system as the “eye” for the bacteria to perceive the real-time environment that the computer provides in our AR system from time to time[1]. The light sensor consists of two parts, PCB and ccaS-ccaR-cpcG2 pathway. CcaS is a histidine kinase (SK) with a N-terminal PCB-binding cyanobacteriochrome GAF domain and a C-terminal histidine kinase domain. This hybrid SK autocatalytically ligates the requisite chromophore phycocyanobilin (PCB) at a conserved cysteine within the GAF subdomain. PCB is produced from heme by coexpression of heme oxygenase 1 (ho1) and phycocyanobilin reductase (pcyA). 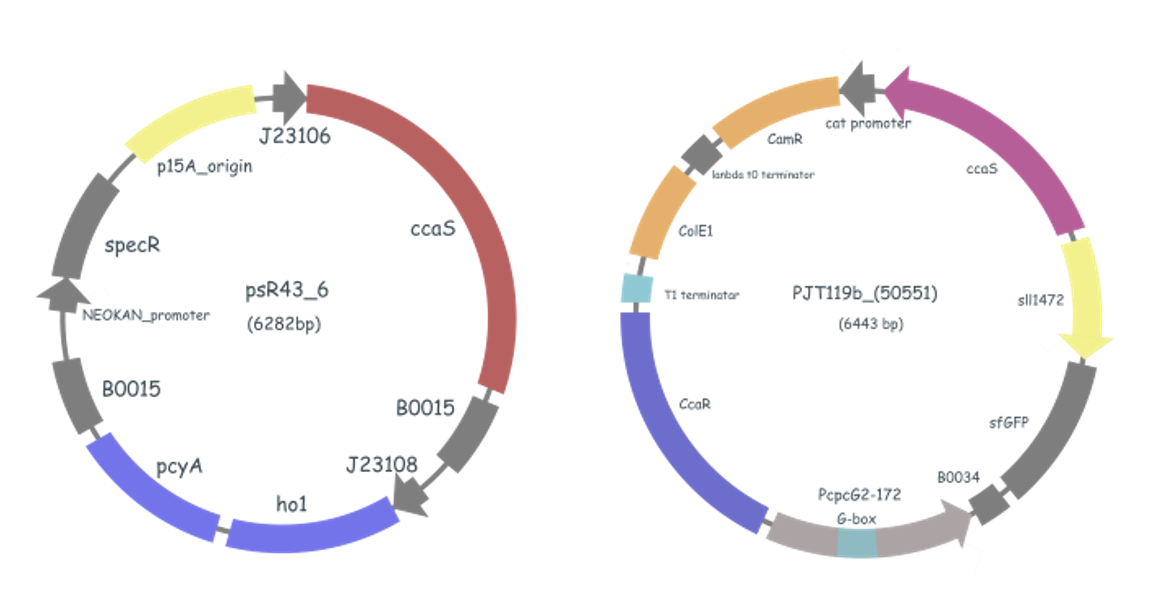 CcaS is produced in a green-absorbing ground state, termed Pg. Absorption of green light flips CcaS to a kinase-active red-absorbing state (Pr) that phosphorylates the response regulator CcaR, which then binds to the G-box operator within cpcG2 promoter and activates transcription. Absorption of red light switches CcaS Pr back to Pg, which dephosphorylates P-CcaR, deactivating transcription. If we change the output gene to cheZ, then the motility of the bacteria will be light-induced. If we replace the output gene to pleD and tandem riboswitch, then whether the riboswitch is on will be determined by light.

In our project, refactoring and optimization on light switchable system has been made to characterize and control synthetic gene circuits with exceptional quantitative, temporal, and spatial precision. Our work includes redesign of promoter PcpcG2, removing redundant CcaS in plasmid pSR43.6, inactivation of chromosomal gene EnvZ in CL1 strain, and adding riboswitch to the circuit.

For the guidance on bacterial motility, we regulated cheZ gene expression in E. coli CL-1 whose cheZ in chromosome was knocked out previously. (2)

Bacterial chemotaxis, the most well-studied model system for signal transduction in E.coli, has been extensively studied for several decades. Flagella rotation is partially controlled by some chemotaxis protein, e.g CheA, CheZ and CheY among which CheA serves as a sensor factor, CheZ as a regulating factor and CheY as an executor factor which directly interacts with flagella rotation protein assembly fliMNG.

How does CheZ control motility? The motility of bacteria can be divided into two phases ignoring some unnecessary factors. One is called swimming phase in which bacteria will move forward while the other one is called tumbling phase when bacteria keep changing directions and behave like tumbling at its ground. The two phases above are determined by the phosphorylation degree of CheY. And the phosphorylation degree of CheY is affected by CheZ.

According to this, we choose CheZ to be our target protein to control bacterial motility.

We choose CL1 strain bacteria to be the main character in our AR system. CL1 (MG1655△cheZ) is a type of K12 Escherichia coli whose cheZ gene in chromosome has been deleted previously.

Possessing the characteristic of a non-motile phenotype, it is frequently been used to study the motility of bacteria. When both the light-switchable TCS and cheZ generator are incorporated in CL1, the bacteria can show a light induced motile phenotype. However, the inactivation of a EnvZ has to be done for the sake of solving severe leakiness and optimizing the system as a whole.

EnvZ is a type of histidine kinase which serves the same function as CcaS. So the deletion of EnvZ in CL1 strain inevitably leads to lower leakiness. We constructed SBSP (CL1△EnvZ)with the help of λ Red homologous recombination system.

（Find out detail in Wet Lab ）

However, the light sensing system is not stable for two factors at least. One of the factors is that the light-activated promotor has a leaked expression, and the environment factors such as white light effect gene expression (see the results of light-switch part). So it is a tough nut to control the gene-regulated characteristics in a cell, especially for gene that is highly effective under low concentration, for example, cheZ.

Fortunately, we find a powerful tool for filtering the noise caused by leakage and environment. The filter is constructed by three key parts, pleD, constitutive promoter and tandem riboswitches.

Leaked expression of pleD would up regulate the concentration of c-di-GMP by transferring GTP into c-di-GMP, an aptamer binding chemical molecule which could turn on the riboswitch.

Comparison of Bc3, Bc4, Bc5 terminators. Red rectangle shows the GC rich region of three terminators, respectively. (b) Secondary structure comparisons of Bc3, Bc4 and Bc5 aptamers with Vc2 aptamer. Conserved motifs such as tetra-loop (blue motif in stem P2), tetra-loop receptor (green motif in stem P3) and G·C base pair (C base in stem P2 and G base in stem P3 were drawn in magenta) connecting P2 with P3 were all colored to facilitate comparison.

We designed two visualized software based on the principle of reaction-diffusion model and cellular automata model, so that synthetic biologists will have better understanding on the process of bacterial motility and bio-pattern formation. In the software, operators are free to simulate the process of bio-pattern formation by regulating the factors that affect bacterial growth and diffusion.

Our AR system not only simulates an environment, but will be extensively applied in medical field and daily life in the near future. With the rapid development of biological material, how to process material into desired figure will become a hotspot in field of material research. Our device provides new sparkling idea on bio-material printing---optical control---“Print the cells on cultural medium”, just as the way laser beam printer work.

In the field of regeneration of organ and tissue, although dramatic progress has been made in in vitro cell and tissue culture, it is still a tremendous challenge to generate induced tissue with complex multiple-layer structure, such as blood vessel. Light is endowed with the characteristics of precision and controllability. Considering the success made in optogenetics, genetically-engineered stem cells possess the ability to perceive distinctive illumination. Therefore, single cell can be accurately regulated by distinct wavelength and intensity of light, Differentiation occurs directionally as we preset and further perplex tissue or organ comes into being.

Two versions of devices are designed to quantify the effect of light-switchable TCS. V1.0 is a roughly handmade one device which can achieve the goal to provide different wavelength of light and fixation of centrifugal tube where bacteria are cultured. In v2.0, based on the platform exploited by Gerhardt (Gerhardt, Olson et al. 2016), we construct the hardware device that is able to precisely regulate the optogenetic circuit of the engineered bacteria utilizing 3D printing technology. This device successfully averts the interference of external light from the outside environment. Meanwhile, with the equipment of Single Chip Microcomputer (SCM), precise regulation on the intensity and wavelength of light can be accomplished. In summary, v2.0 eliminates the interference from ambient environment to the best extent when doing quantitative experiment of light-switchable system, thus improving the reliability and repeatablility of experimental result.

1.compatibility with a wide range of optogenetics and photobiology experiments and model organisms

4.accessibility by laboratories without hardware expertise.

To control the bio-pattern formation of bacteria, we designed a device of industrial level. This device is capable of providing constant temperature and sterile environment that is suitable for bacterial growth. Besides, this device is also responsible for real-time monitoring of bacterial growth, light control over pattern formation, and projecting function. We programmed the software that is in line with the industrial level hardware device. When operator enters the pattern they want to form, the software controls the bacterial lawn to grow as preset pattern through real-time monitoring of status of bacterial growth(6), predict future growing tendency and export the optical pattern to the bacteria as feedback.

6.Real-time communication between computer and bacteria