The concentration of c-di-GMP has a very close relationship with the triple-tandem riboswitches efficiency, the specific relationship is as following:

Due to efficiency of the triple-tandem riboswitches, we can finally know the expression level of cheZ, so the relationship between PleD and CheZ concentration can be investigated. The model is based on the assumption that the expression of PleD is certain and can immediately respond to certain light. Because in E.coli, GTP, the substrate of PleD, is sufficient, so that the enzymatic reaction rate for producing c-di-GMP is regarded as at the stable rate \(\kappa\). \(\alpha\), \(\alpha_2\) represent for the degradation rate of PleD and c-di-GMP respectively. \(\beta_1\) represents for the synthetic rate of PleD, \(C_{0(CheZ)}\) represents the initial concentration of CheZ. (Equation 4 )

The stimulation result is as the following: 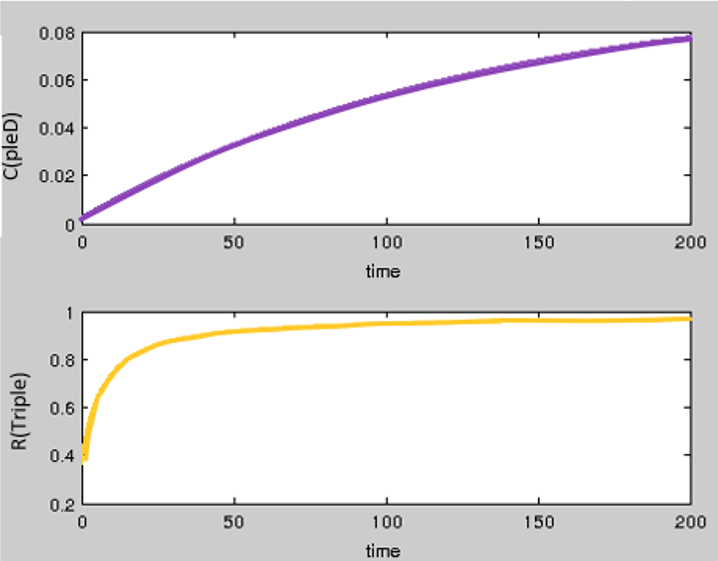 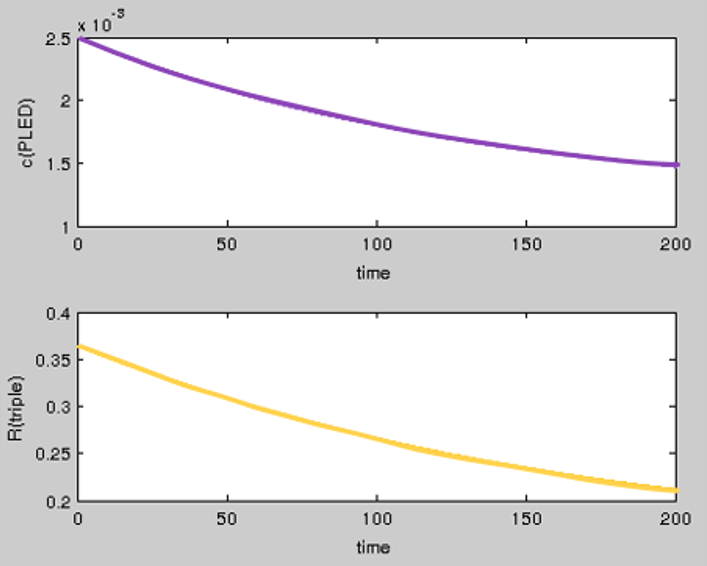 When simulation of colony is under the irradiation of red light, the concentration of PleD decreased slowly. Because of that, the responding time of riboswitches is short. With the incessant decrease of PleD, the open efficiency of riboswitches will reduce to a stable value (Figure 3). 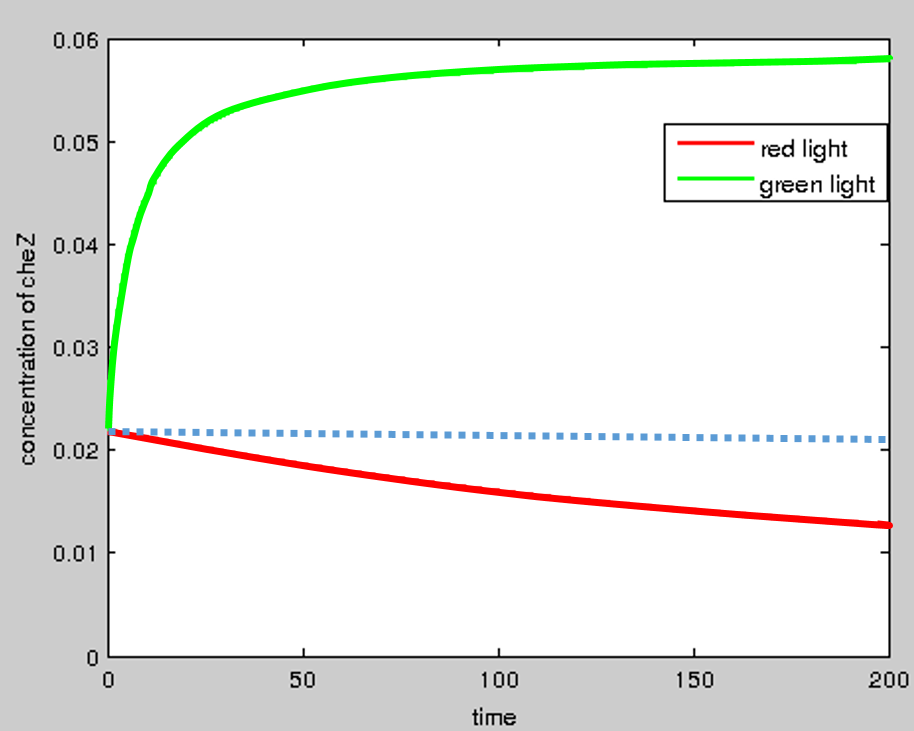 Figure 4. The concentration of CheZ.

The distribution density of bacteria in a culture medium depends on two factors: motion and reproduction of bacteria. For convenience, we will discuss these two factors separately.

In this project, we are trying to control the motion of bacteria by light signal to generate a colony of a specific shape. The light signal can affect the bacteria motility by influencing the expression of a protein cheZ. There are two motion forms of bacteria: tumbling and swimming. By tumbling, bacteria can change swimming direction but not position; by swimming, bacteria will move forward and change the position. In fact, the ratio of tumbling to swimming is different from one bacterium to another. At the microscopic level, the angle of tumbling is random, so we have no idea about the movement direction of a bacterium in any time. But from a macroscopic viewpoint, the probability of all directions are equal. This property is similar to the diffusion of a chemical molecule. So, bacteria swimming can be treated as the diffusion of bacteria and the rate of diffusion is related to the expression of protein cheZ. 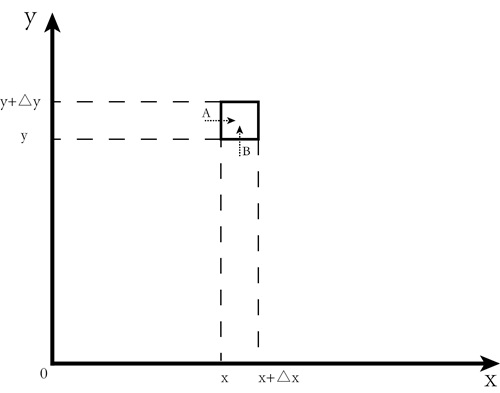 In Figure 5, the simple square represents the area of bacteria in coordinate \((x,y)\) approximately. The number of bacteria in this area is \(S(x,y,t)\) at time t. So, we have

This equation is equivalent to

1. If the temperature is constant within an area, there is no flow of heat.

2. If temperature difference exists in adjacent areas, heat will flow from areas of high temperature to low temperature.

3. For the same kind of material, the bigger the temperature difference between two adjacent areas, the faster the heat flow between them.

We have three similar characters for the diffusion of bacteria colony:

1. If the density of bacteria is constant in an area, the movement of bacteria will not lead to the change of density.

3. The bigger the density difference between two adjacent areas, the faster the diffusion rate between them.

So, the rate of diffusion is related with the difference of density:

Equation (13) is the dynamic model of bacteria motion.

There is a famous model about the growth of bacteria under the conditions of limited space and nutrients, called logistic growth model:

2.3 Dynamic model of both reproduction and motion (R-M model)

Referring to the paper by Liu et al. [1], we have the parameter values:

We will use the Finite Element Method to solve this PDE. Initial conditions are defined as

With the initial and boundary conditions, Equation \((15)\) was solved by writing python program with Numpy and the result was visualized by the Mayavi python package, as shown in the following video (Movie 1).

Movie 1. Visualization for the R-M model of bacteria diffusion.

2.4 R-M model in a restricted area

In Movie 1, we can see that bacteria colony will eventually become a round shape. If we add a restrictive condition to the area to limit the bacteria movement, what shape will the bacteria colony become? The way to add area limit in our project is using light signal to control the motility of bacteria. Namely, green light is given to a specific area and red light is given to other area; bacteria can only move in the green light area. In Equation (15), bacterial motility is reflected by parameter k. So the model will be the following equations:

The parameter \(k\) in Equation \((15)\) indicates the diffusion rate of the bacteria colony. \(f(x,y)\) is the area limit function, and it is an image matrix. In this project, we choose Pikachu (a famous cartoon character in the hot AR game "Pokimon Go") as our target pattern. See Figure 6.

Under the aforementioned initial and boundary conditions, using python program to solve these equations, we can get the following visualization video (Movie 2).

Movie 2. Visualization for the R-M model of bacteria diffusion in a restricted area using Pikachu as the target pattern.

From Movie 2 we can see that the target pattern is basically formed. However, such a pattern formation is just equivalent to making a cookie using a mould. In this project, the pattern formation process will be regulated by a computer by real-time communication.

Area limit is a kind of static regulation, but dynamic regulation is further explored in our project. In dynamic regulation, we will compare the shape of the bacteria colony with the target picture by real-time communication between the computer simulated virtual space and the real space in the culture medium through light, and the result of comparison will be converted to light signals shedding on the bacteria colony to control bacteria diffusion. So, the dynamic model with regulation will like the following equations:

Movie 3. Visualization for the R-M model of bacteria diffusion with dynamic regulation using Pikachu as the target pattern.

You can download all the modeling programs from here.

Our project aims at establishing a computer-guided bio-pattern formation system by deceiving the chemical sense of bacteria. We control the light to mislead the bacteria with the help of the computer so as to achieve the goal of automatically control the bacterial movement. In order to form a specific pattern of bacteria, the bacteria’s distribution in the system can be monitored and controlled in real-time by computer. We use personal computer to get the pictures of the colony, and compare the image with the target pattern.

3.1 Cellular automaton model to simulate the pattern formation of colonies

1: parallelism: each unit cell is simultaneously synchronized to change. The state of cell at \(t+1\) time depends on the state of the cell itself and its neighboring cells at \(t\) time.

2: consistency: all cells are governed by the same rules.

3: locality: change of cell state only depends on the state of its neighboring cells.

Because the model is a simulation of bacterial reproduction, Moore neighbors is more identical to the reality, and is conducive to the analysis of the problem, so we use Moore type of neighbors for simulation. 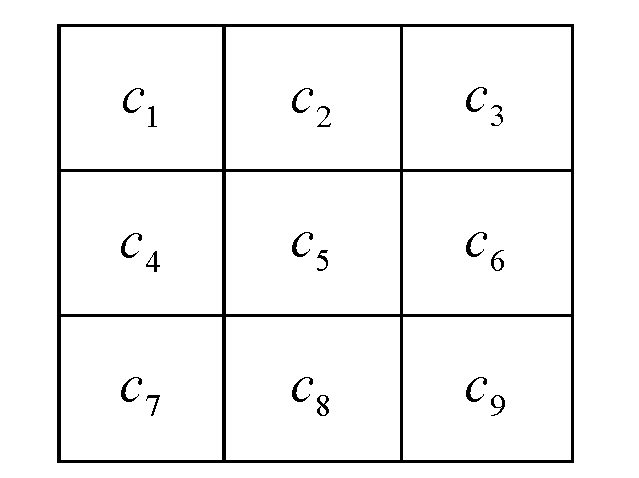 5. Regulate the light according to the results. 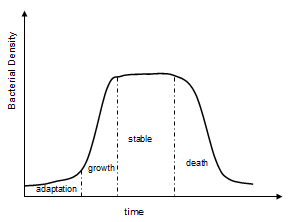 For a single cell, no bacteria exist at the initial state. When under the control of simulated light, the bacteria will accelerate movement, and the movement of bacteria is not directional, so the edge of the bacteria colony will move to the neighbor cells.

The mathematical model of bacterial growth is as following[3]:

Since the Moore type of neighbors are used for simulation (Figure 7), the direction of bacterial movement is uncertain. When the edge of bacteria colony is irradiated with light, each bacterium has the same probability to move to other locations. So we have:

3.5 CA model in a restricted area

During the process of colony recognition, edge extraction of bacteria is processed only within the target area. It is assumed that red light repression on bacterial motility is executed in the other area. So they can only reproduce at the current position, rather than swim or diffuse to other locations. 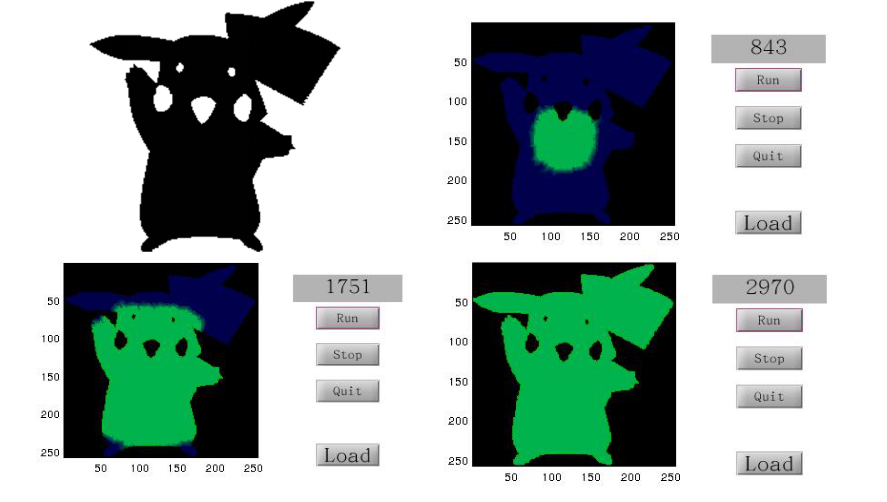 You can download all the modeling programs from here.