Riboswitches are versatile devices for synthetic biology applications. They are RNA-based gene expression regulatory elements, composed of a ligand-sensing aptamer domain followed by an overlapping expression platform. Mechanisms of modulation of gene expression are highly divergent in prokaryotes and involve control of transcription, translation, splicing, and mRNA stability (1) (Figure 1).

a. illustration of 735F, we also construction a series of plasmids contain different promoters(J231xx) and riboswitches(Bcxx).

b. Plasmid pET-Ptac-pleD contain a tac promoter with a lacO site.

Strains were grown at 37 °C and 200 rpm in LB medium with 50 μ g/mL kanamycin (LB/Kan) until OD600 reach about 0.5. Subsequently, 5 μ L cultures were applied onto the LB/Kan plates (0.75% Agar) containing 80 μ g/mL Congo red and IPTG. Colony morphology was examined by visual inspection after 2 day incubation at 25 °C.

2.3 Characterization of riboswitches-Determination of RFI

Cells from the overnight starter culture were diluted 1:5000, induced with different concentrations and combinations of inducers, and grown in M9 media for 18H at 28℃. Just before measurement, the resulting saturated cultures were diluted 1:20 in PBS. Samples were then analyzed on a plate reader. Absorbance at 600 and (AB600) and GFP intensity were measured (600 nm absorbance filter, 0.1 second counting time for AB; 485 nm excitation filter, 525 nm emission filter for GFP). Media background was substracted from AB600 and GFP values, and AB600 values obtained from the plate reader were converted to optical density (OD) by using the equation: OD600 = ((AB600-0.06)*3.11)-0.0158. Average OD600 in the measured samples were between 0.2-0.3, and we did not observe correlations between OD and GFP levels. For each well, the GFP value was divided by the OD600 value to correct for differences in cell density. GFP/OD were plotted using the R (ggplot2). 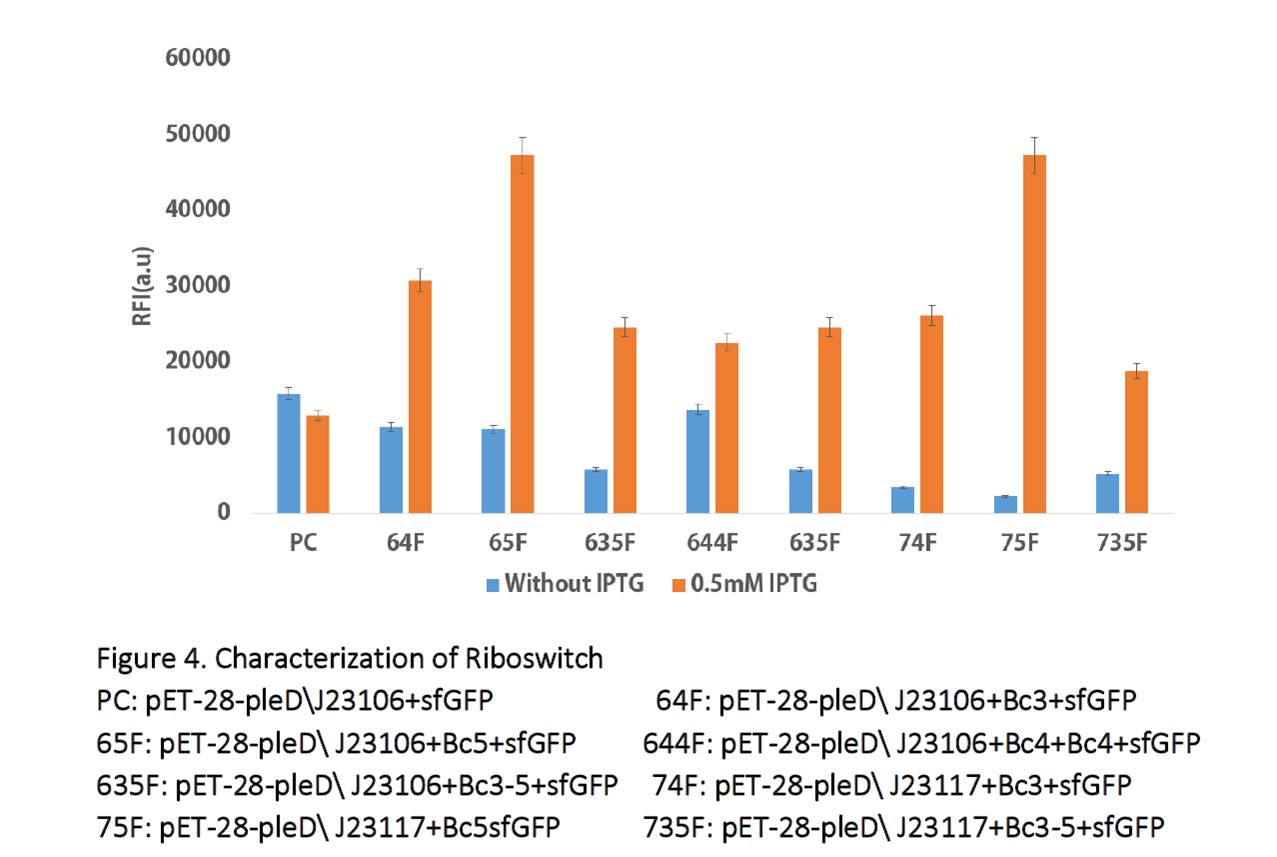 We use “red-through rate” (RTR) of the downstream gene to measure the terminator forming efficiency of a riboswitch.

The red-through rate of each riboswitch in liquid medium was assessed by relative fluorescence intensity, which is the ratio of specific activity of a test strain to specific activity of the control strain (pET-28-pleD/J23117+sfGFP) with the same promoter of test circuits (such as J23117+Bc3-5+sfGFP).

Thanks to Professor Jin He’s lab, Huazhong Agricultural University, for sharing the material (Gene: pleD, tandem riboswitch; Plasmid: pETb ) and special thanks to Dr. Xinfeng Li, for his proposal of gene circuit assembly. And the paper (Characterization of a natural tripletandem c-di-GMP riboswitch and application of the riboswitch-based dual-fluorescence reporter ) provides the experiment design idea.