Bacteria chemotaxis is related to a series of proteins, such as receptors including kinds of Tar, Tsr, Trp, Tap, Aer and cheR, cheB, cheW, cheA, cheZ, cheY in the cytoplasm. The chemotaxis network is formed in three steps: (1) Receptors at the membrane sense extracellular signals; (2) The chemotaxis proteins in the cytoplasm transmit signals from receptors to flagella; (3) The flagella accept signals and determine to swim or tumble.

The flagella switch is pivotal for the decision of strain on swimming or tumbling. It is regulated by cheY-p and cheY. The concentration of cheY-p is controlled by cheA and cheZ. So we use cheZ to regulate the differences of diffusion range rate on swarming plate to achieve our destination of pattern formation.

Trans-5a is a commercialized chemically competent cell bought from Transgene for molecule cloning in E.coli. Strain CL1 is a CheZ deleted strain of E.coli K12 AMB1655 strain(maybe) and MG1655 is a motile wild type E.coli K12 strain. These two strains are generally shared by Dr. Chenli Liu, SIAT CSynBER. CG is constructed by transforming our fused fragment of CheZ and GFP into CL1 strain, and 01-CG, 06-CG and 17-CG are constructed by replacing the promoter of our fused protein with J23101, J23106, and J23117 respectively. CK is constructed by transforming BBa_K819010, a CheZ generator constructed by iGEM12_Peking, into CL1, and 01-CK, 06-CK and 17-CK are constructed by replacing the promoter of BBa_K819010 with J23101, J23106 and J23117 respectively.

The CheZ coding sequence of fused fragment is amplified from MG1655 (Laboratory of Synthetic Biology, HZAU), and the GFP coding sequence is from BBa_E0040.The termination codon of CheZ and the initiation codon of GFP are all deleted to construct fusion protein, and two fragment are linked with each other using a 18bp linker coding for 6 flexible amino acids. 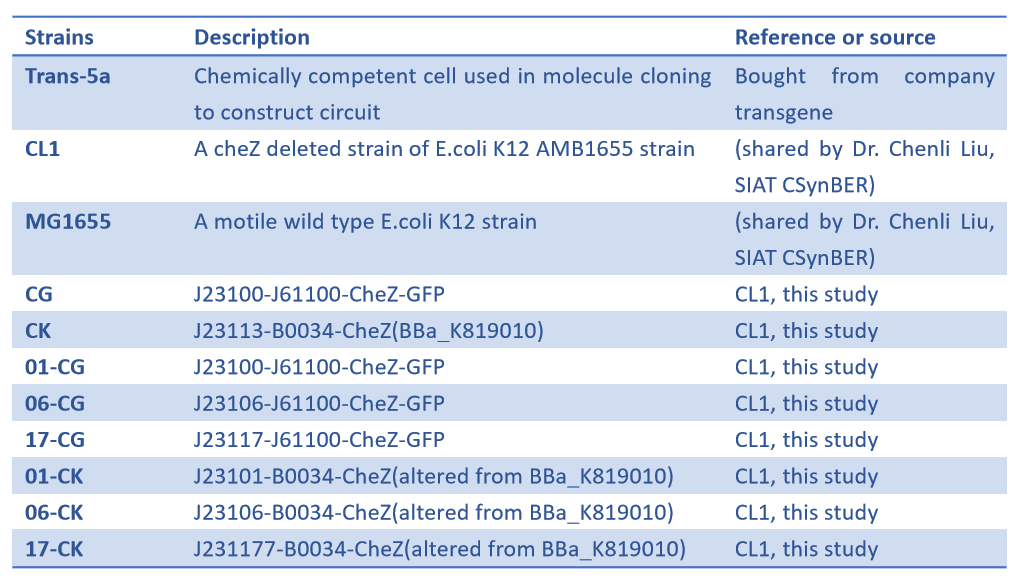 Unless otherwise stated, the Luria Broth, containing 0.5%yeast extraction(from OXIOD),1%NaCL and 1% tryptone(from OXIOD), were used during this project. A single frozen glycerol stock was used throughout this study for each bacterial strain. For each experiment, cells were transferred from corresponding frozen glycerol stock into LB containing appropriate concentration of antibody (chloramphenicol 250 microgram per ml), and cultured at 37 centigrade and 180 rpm until the OD600 reached between 0.5 and 1.0. Then according its OD600 dilute the culture till its OD600 becomes 0.01, then culture in the regular condition for about half an hour or more till its OD600 is about 0.2~0.3.

For preparation of semisolid plate for swarming assay, add 0.5g agar(from Vetec) into Conical flask containing 200ml LB to construct 0.25% agar semisolid plate. In a common sense, 200ml LB and 0.5g agar are added into a 500ml Conical flask then the flask is sealed to autoclave under 121 centigrade for 20min. The plates for swarming assay are prepared as follow. Using microwave oven to heat semi-solid plate for about 3 min, till it’s completely melting. Wait for about 20 min to let the broth cool down to about 60 centigrade. Pour the melting semi-solid agar into sterilized plate in super-clean bench and dry it for at least 1.5 hours. Then inoculate 3 micro liter of prepared culture on the plate. Make sure that the pipette is vertical to the surface of plate and the bacterial liquid is ball-shaped at the end of tips. After inoculation wait for 15-20min until it’s completely dry, leave it at room temperature to grow.

We constructed an overlapping extension fragment and purified it (Figure 1A). Its partial function as a reporter is certified by the observation under the fluorescence microscope (Figure 1B). As you can see, no matter the vector with a GFP reporter we constructed or the official CheZ generator (BBa_K819010) can complement the swarming ability of CL1, CheZ lacking strain of MG1655, at a certain degree. This experiment proves the function of CheZ on swarming assay on the one hand. On the other hand, the swarming ability of complementary strain can’t fully recover to the degree of wild type or the wild type introduced with our constructed vector. We suspect that it is due to the poor survival ability of the knock-out strain .By the way it will support the future work of quantifying. （Figure 2） 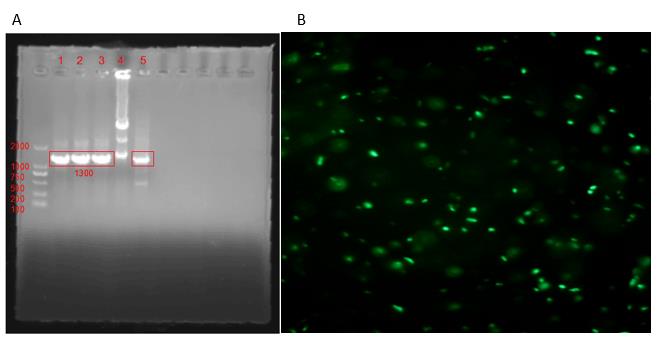 Figure 1. (A)Lane 1、2、3、5 are fusion cheZ-GFP fragment (including Biobrick) ,1377bp.(B)The observation of our strain under the fluorescence microscope proves the expression of certain protein. 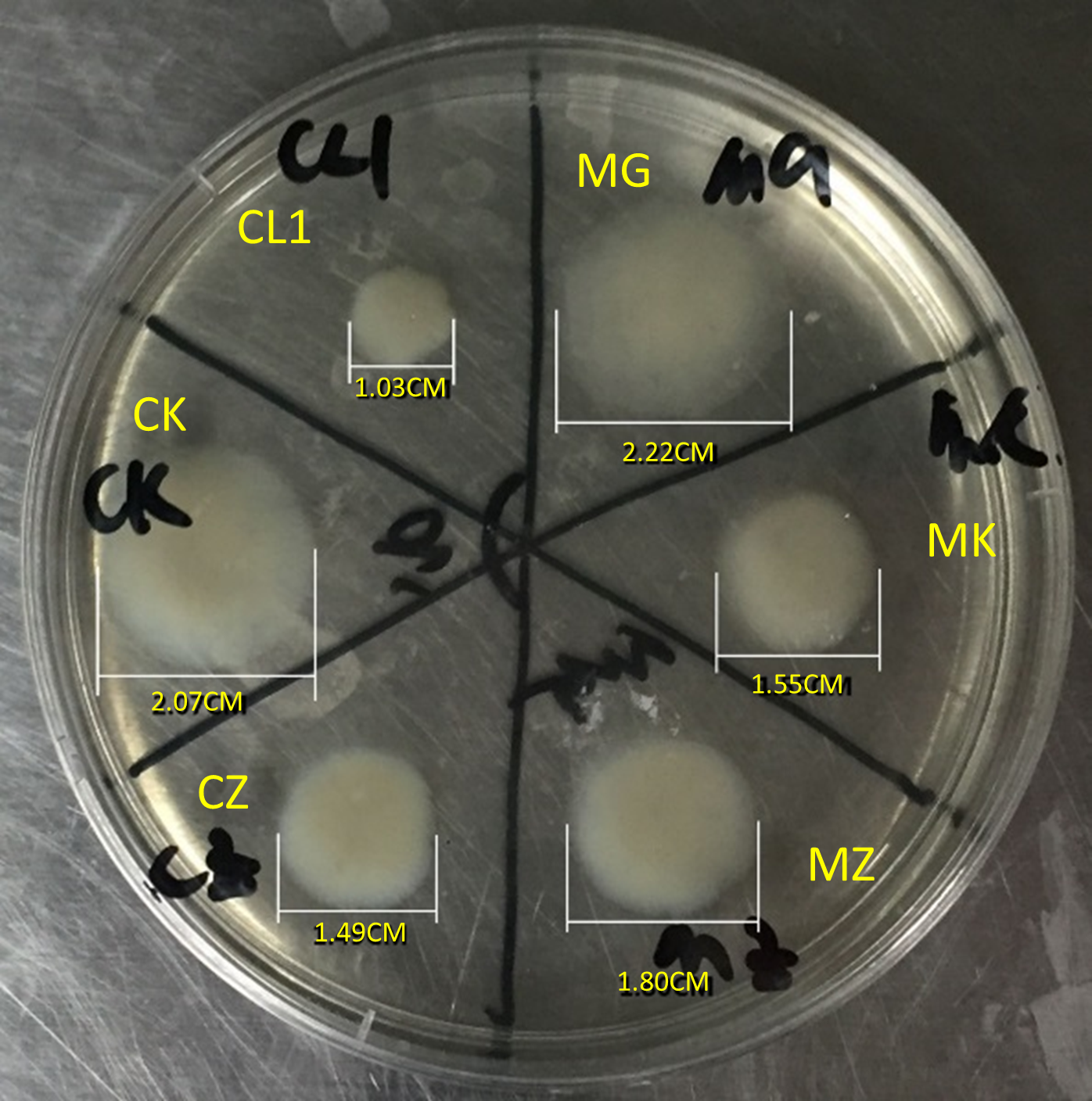 Because the swarming ability of neither CheZ mutant nor CheA mutant can reach up to the level of the wild type, and there is a balance between swimming and tumbling which controls the size of swarming rings, so, to better proof the practicality of our project, we tried to use different concentration of CheZ to investigate the best condition of swarming ability. Therefore, we constructed a series of vectors containing different strength promoter followed by the standard RBS(B0034) and CheZ. According to our result of swarming assays, we found that the state of tumbling and swimming reaches its balance point adjacent to fairly weak promoter strength. Finally we decided to choose promoter J23117 as our final promoter choice. However, we have limited time to give details about the correlation between the concentration of cheZ and the size of swarm rings. We will confirm this conclusion by constructing IPTG inducing promoter-GFP fragment in single copy plasmid in further research. 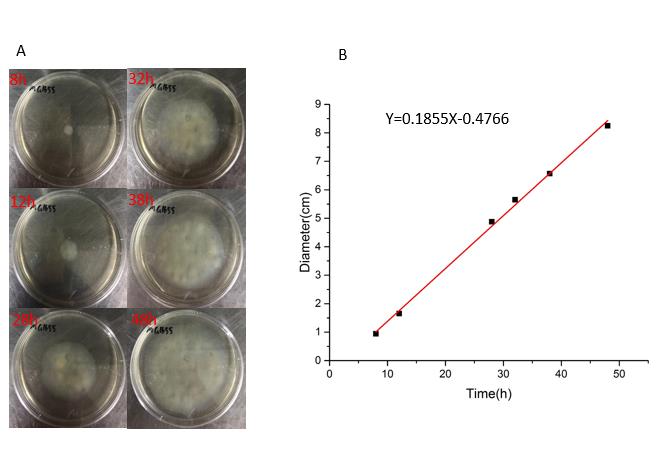