Our AR systems function at both the intracellular and intercellular level. Intracellular biochemical reactions determine signaling activities and gene expression. Extracellular reactions include cell movement and cell division. At both levels, models of various complexities are available. We utilized ordinary differential equations (ODE) in our modeling on light-switch part and riboswitch module. To be specific, by taking advantage of the data acquired in optogenetic circuit and riboswitch circuit, we proved it on a theoretical level that the riboswitches are functional of filtering the leaked expression of the light-switchable prompter PcpcG2.

In addition, based on the principle of reaction-diffusion model and cellular automata model respectively, kinetic modeling and cellular automata modeling were conducted on the course of bacterial growth and diffusion. Both models functions at predicting the growth potential of bacteria, and eventual formation of the designated pattern in cultural medium. Besides, the kinetic model gives information about bacteria density, cellular automata model enables us to optimized bacteria inoculation position on the culture dish. What’s worth mentioning is that we designed two visualized software in the purpose of representing the simulation of the whole process performed by the bacterial growth-diffusion model. Meanwhile, users are free to regulate the parameters related to bio-pattern formation, making it convenient for sensitivity analysis. 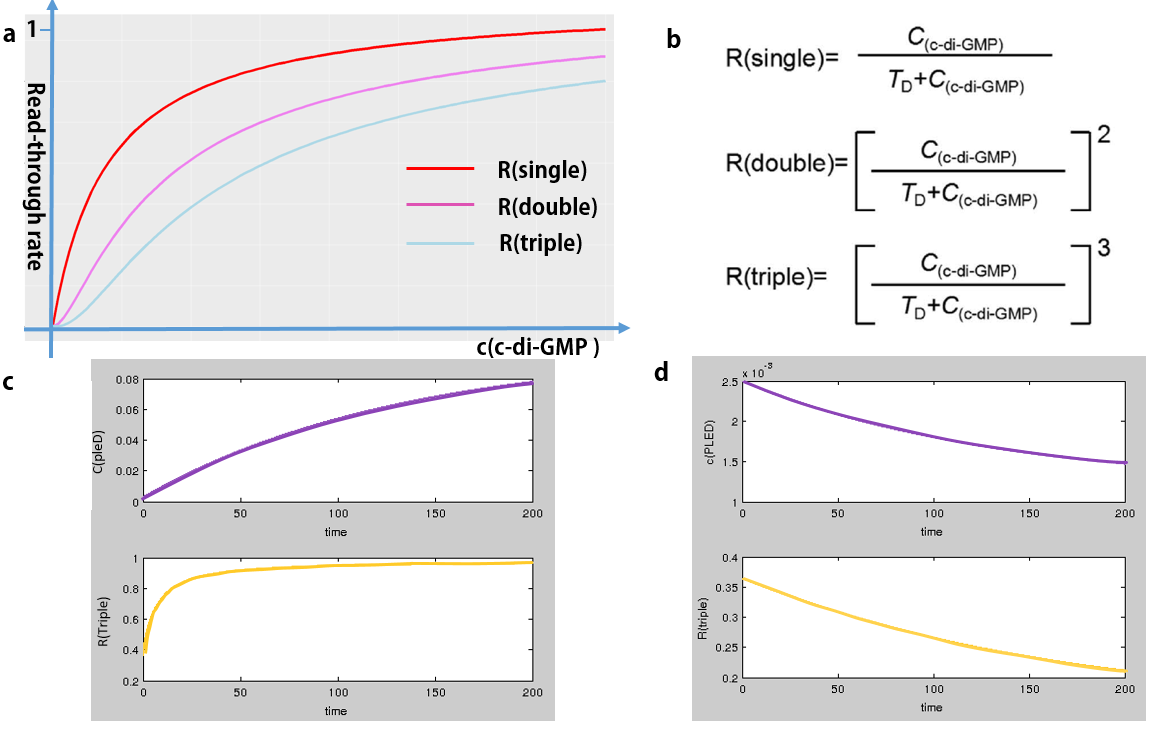 a. The theoretical read-through rate curves of single, double- and triple-tandem c-di-GMP-I.

b. The theoretical read-through rate equations of single, double- and triple-tandem c-di-GMP-I. TD, the equilibrium constant equals to the c-di-GMP concentration (C(c-di-GMP)) at 50% read-through rate.

c. The efficiency of switching on the triple-tandem riboswitches has a significant positive correlation with the concentration of PleD, and the responding time of riboswitches to c-di-GMP is very short when the “traffic light system” is activated by green light.

d. When the “traffic light system” is repressed by red light, the concentration of PleD will reduce to OFF state. 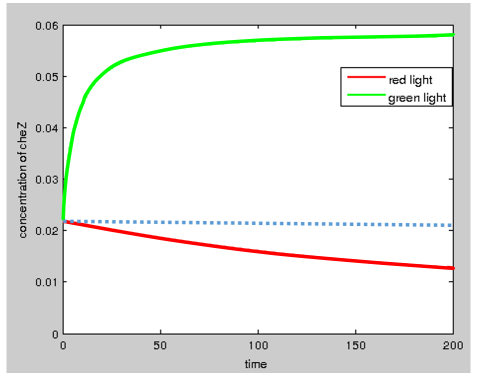 Figure 2. The kinetics of cheZ.

As is shown in the model above, there is a significant distinction on the expression of CheZ protein between exposing to green light and red light, which results in two different types of swarming ability and achieve the goal of bio-pattern formation.

a.Simulated figure based on cellular automation.

b.Simulated figure based on reaction-diffusion model. X-Y represents for the surface of bacterial growth. The cell density enhances with the color changing from green to red.

As for the research on motility of bacteria, we established a whole set of method to measure bacterial motility both qualitatively and quantitatively. As verification of the expression of motility-regulated gene cheZ in bacteria, we fused cheZ with GFP glued by a GC linker in between (Figure 4. a). The motile phenotype is recovered in bacteria with the expression of cheZ-GFP. Also, the bacteria present green color that is distinguishable (Figure 4. b). Therefore, not only could we qualitatively estimate the effect that cheZ has on bacterial motility by directly observing the concentration of GFP with naked-eye, but we can also quantitatively evaluate the effect by measuring the diameter of the bacteria lawn. The swarming ability is complemented in consequence of transformation of cheZ-GFP in CL1, demonstrating that cheZ is a positive regulator to the motility of bacteria(Figure 4.c).In addition, we assembled a series of generators consisting of Anderson promoter and cheZ (J231xx+B0034+cheZ/or cheZ-GFP). These generators are tools to quantify the relationship between the expression level of cheZ and its corresponding motility (Figure 4.d). 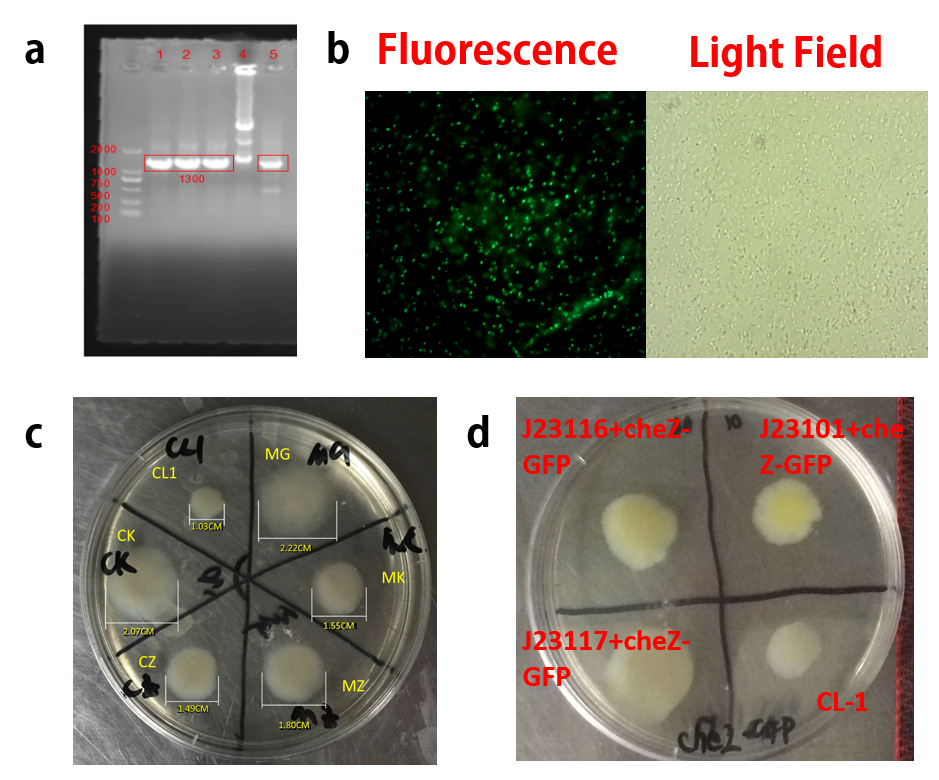 a.Simulated figure based on cellular automation. 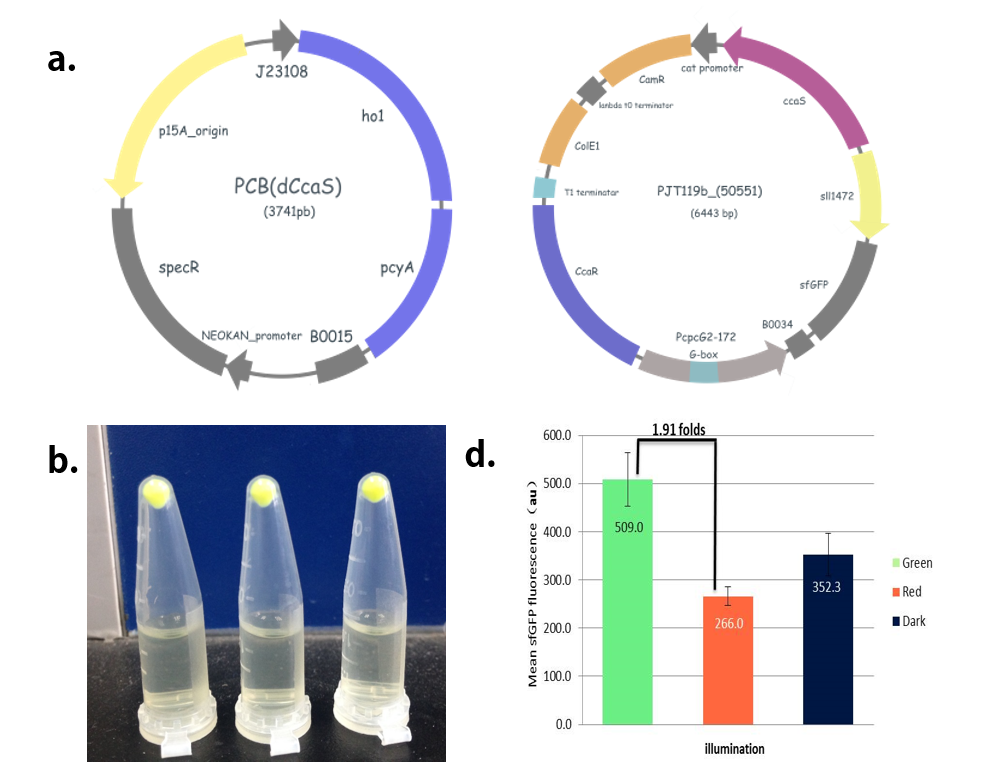 b.Qualitative demonstration of the validity of the light-switchable device, with the evidence of sfGFP expression under green light (PCB (△CcaS)+ pJTb119 in JT2).


As qualitative evidence, the color of the bacteria media appears to be remarkably green under green light illumination (Figure 5.b), proving that the output expression of sfGFP is plausible. Further quantitative evidence indicates that the CcaS-CcaR TCS produces 266.0 ± 19.3 and 509.0 ± 55.4 au of sfGFP in red and green light, corresponding to 1.91 ± 0.34-fold activation. The highly significant difference between green and red light modulation (P<0.01), demonstrates that CcaS-CcaR system is functionally regulated by light, green-activated and red-repressed(Figure 5.c).

In conclusion, light-switchable system that we projected works excellently, both on qualitative and quantitative level.

2.3. Optimization of the CcaS-CcaR System

Although the light-switchable system works, leaked expression exists in dark surroundings. To better respond to red and green light, refactoring and optimization on light switchable system has been made to characterize and control synthetic gene circuits with exceptional quantitative, temporal, and spatial precision. Our work includes truncation of the constitutive promoter within PcpcG2 in pJT119b(BBa_K2012015), removing redundant CcaS in plasmid pSR43.6, inactivation of chromosomal gene EnvZ in CL1 strain with the help of λ Red homologous recombination system.

Figure 6. Optimization of the CcaS-CcaR System.


In three strains, JT2, CL1 and CL1 (△EnvZ), the differences in fluorescence value under green and red light are approximately the same, and leakiness in dark situation can be declined by changing the chassis strain to CL1 or CL1 (△EnvZ) (Figure 6.a). What’s more, it makes it plausible to transform the CcaS-CcaR system into CL1 for experiment on motility. Moreover, Leaked expression in darkness significantly reduced after truncation of the constitutive promoter (Figure 6.bc).

Considering the leakiness of light-switchable promoter PcpcG2, we decided to introduce riboswitch into our circuit besides optimization on CcaS-CcaR system. We enforced gene standardization over pleD and riboswitch Bc3, Bc4, Bc5, Bc3-5 (the triple-tandem riboswitch consisting of Bc3, Bc4 and Bc5). Moreover, design on riboswitch device PT7+lacO+PleD (plasmid pET-28b) and J231XX+Bcxx+B0034+sfGFP(plasmid pSB4A5) has been done, making further quantification on single riboswitch (Bc3, Bc4, Bc5) and their tandem version Bc3-5 possible.

Figure 7. Proof of the Riboswitch Device.

a.Quantification of Bc3 riboswitch. We discovered an interesting phenomenon. With no IPTG induction (background concentration of c-di-GMP), the intensity of 73F exceeds 106F, corresponding to 5.2 folds. While under 0.5mM IPTG induction, the terminator forming efficiency of 73F is 39 folds higher than it is without IPTG. Promoter strength of J23106:J23117=1185:162. This indicates that Bc3 riboswitch is responsible for facilitating downstream expression in E.coli, especially under high c-di-GMP concentration.

c.To further lower leakiness, device Pbe+AmCyan+Bc35+TurboRFP is made, in which AmCyan (GFP) is inserted between the promotor and riboswitch. Before RNA polymerase meets with riboswitch, the affinity of DNA binding is impaired and the termination efficiency enhances. However, this method down-regulated the sensitivity of riboswitch to IPTG.

d.Part of the quantification result of riboswitches Bc4, Bc5 and Bc35. Find more detail results in http://parts.igem.org/Part:BBa_K2012000 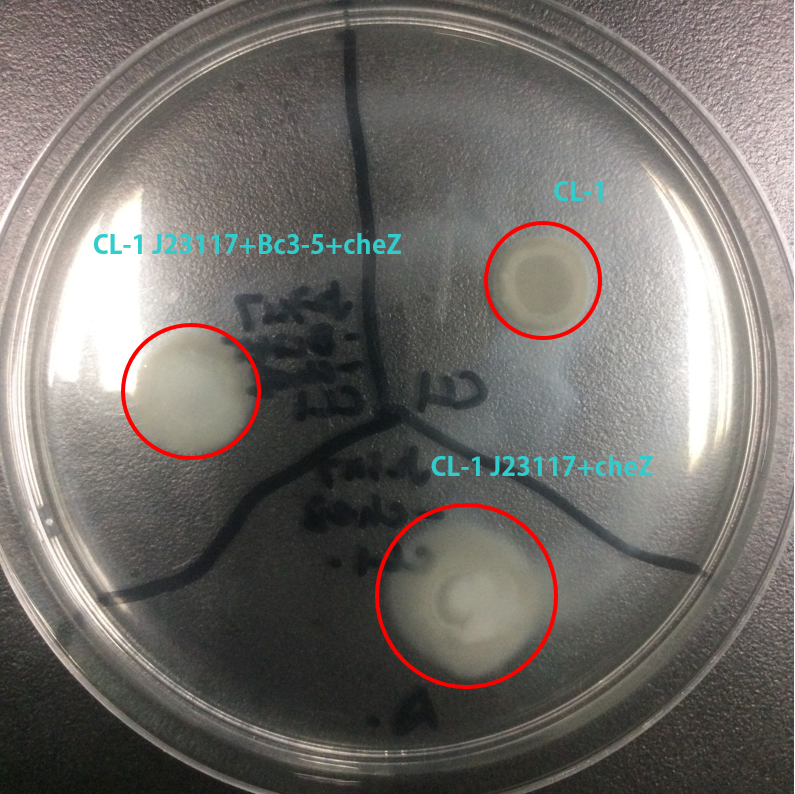 Figure 8. The differences of motility between riboswitch(+) and riboswitch(-).

We decide to choose generator J23117+Bc3-5 as the optimized riboswitch device in the ultimate circuit, due to the minimum read-through rate without induction and the maximum difference between with or without induction. To testify the function of riboswitch on regulating motility, we also constructed generator J23117+Bc3-5+cheZ and J23117+cheZ. Swarming assays results in sharp contrast on the motility ( Figure 8.), demonstrating that the riboswitch plays a pivotal role in reducing undesired leaked expression from light-switchable system. And it is instructive to regulate the motility of bacteria as we wish.


In a word, the riboswitch device works efficiently at eliminating leaked expression as we expected.

Eventually, the devices work validly independently, suggesting that we have met the requirement of proof to the design. We strongly hold the view that the system will work smoothly if we integrate the three parts together with more dedication in experiment along with more time.