This year, three devices consisting of a constitutive promoter with low (J23117), medium (J23106) and high (J23101) promoter strengths expressing GFP (E0040) as reporter needed to be measured. Two more devices with negative (I20270) and positive (R0040) control part were used as references. These devices along with FITC and LUDOX for calibration and measurement were sent by the iGEM officials.

In order to compare the three different promoters mentioned above, a histogram showing the fluorescence intensity at 509nm (figure 1) was formed.

In correspondence to the requirements of the measurement protocol, the figure 1 above was shown with all the data subtracted from the blank.

As the results was not as expected, we analyzed the growth of the cells (figure 2). 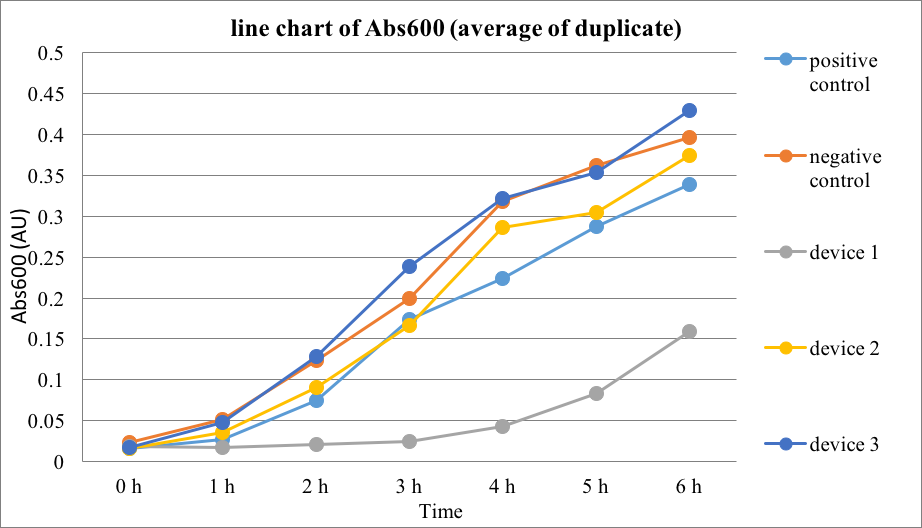 The figure 2 showed that cells with device 1 grew slower than other groups. Therefore different growth pattern would affect the overall detected expression of GFP, resulting in the unexpected phenomenon. So it is better to compare the level of expression in a different way. As suggested by iGEM, we used the data Fl (fluorescence) / Abs600 to create an average fluorescence of cells in the medium (figure 3).

The figure 3 showed that the level of expression in device 1 was nearly as strong as device 2 by comparing the Fl/Abs. The result also revealed that the average fluorescence was decreasing when the increase of cells number. Overall, the results suggested that device 1 was not working as well as expected.

From all the figures we found that the standard deviation was quite large, some data recorded were even below zero. As the incubator is shared by all colleagues in the lab, and was occasionally stopped and opened by others, the incubating temperature was inconstant. This might affect our E.coli’s growth and expression in some degree, explaining the large standard deviation.

We not only gained experience but also pleasure.