The Cyclebow Hybrid-Color Model with the parameter we choose are able to fulfill our purpose of extending the cell-cycle color to 7 generations. Figure 1A indicates the proportion of color we use to represent each RGB color, and the color keeps changing under every cell division. Figure 1B is the cell cycle color change indicator, where each circle represent one specific cell going through its cell division process and express different colors. The Cyclebow Hybrid-Color Model can distinguish up to 7 generations of HSC cells, which equals to about 4.6 years on average, so that it will be qualified for a 5-year clinical research purpose. 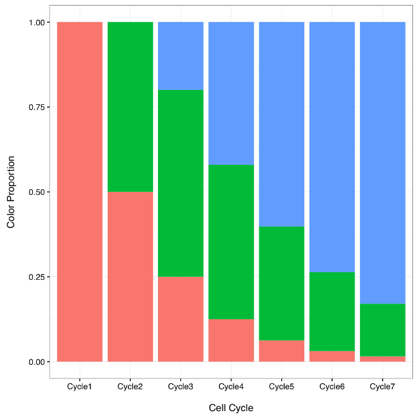 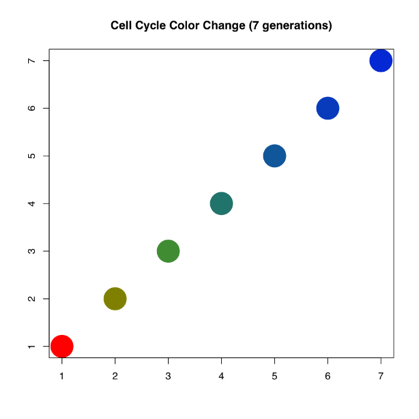 First we didn't take emigration rate into consider and plot the cell survival curve. Figure 2 shows the cell survival curve (repopulation curve) after one time transplantation of 400 HSCs. It reaches the HSCs maximum number at about 150 week, after which the HSC will divide but only one of the two sub-cells will survive. 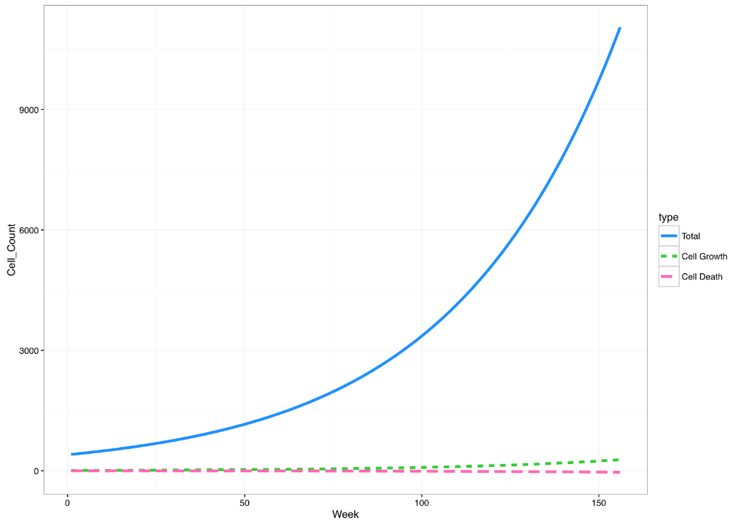 If we take into consideration the emigration rate, then the HSC cell growth will be slowed down. The HSC cell reserve reaches K = 11,000 at the week around 890 (figure 3). The blue vertical line shows five years, which is normally the concern after transplantation surgery. 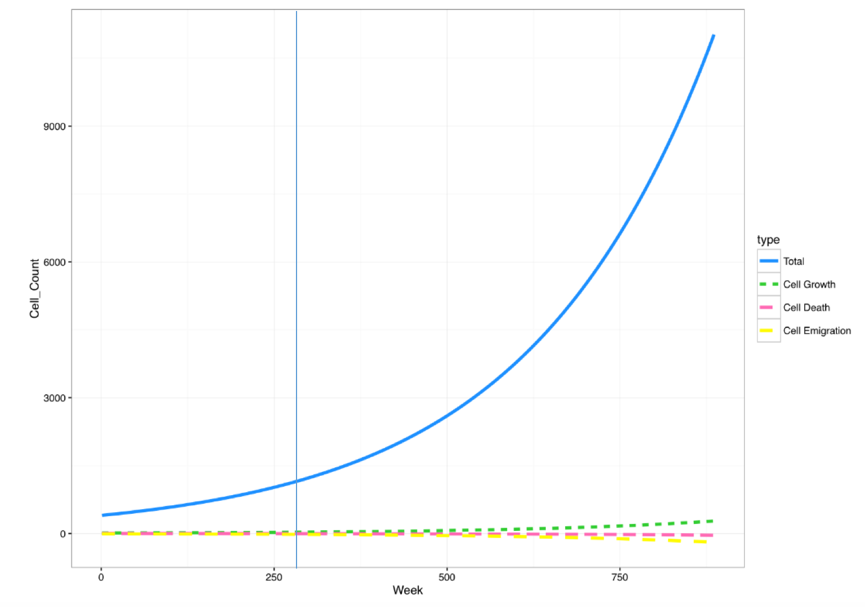 When we take a closer look at the 5 years of concern in our HSC reserve cell survival model (figure 4), the HSCs in the reserve are in their steady increasing pace and reach twice the amount of the transplantation on the 5th generation.

Remark: The plot is just for average Cyclebow Hybrid-Color change process whereas some clone groups may go through a cell cycle faster than the others. 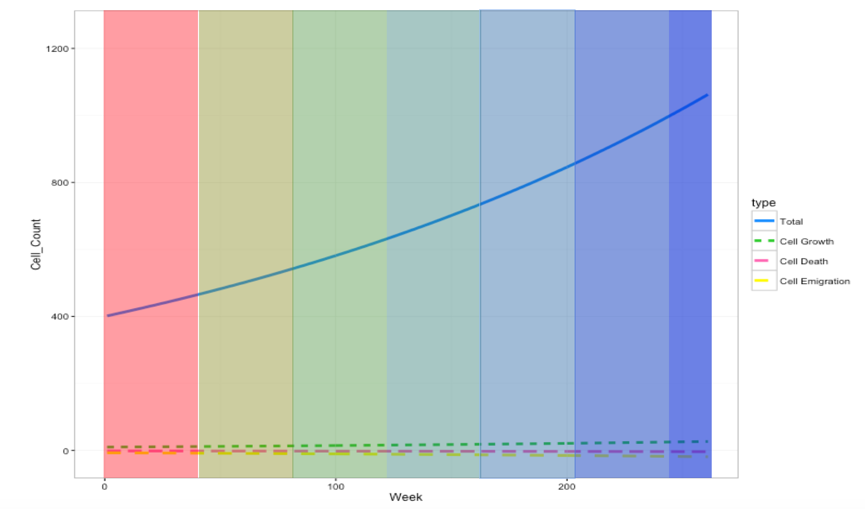 Remark: The plot is just for average Cyclebow Hybrid-Color change process whereas some clone groups may go through a cell cycle faster than the others. 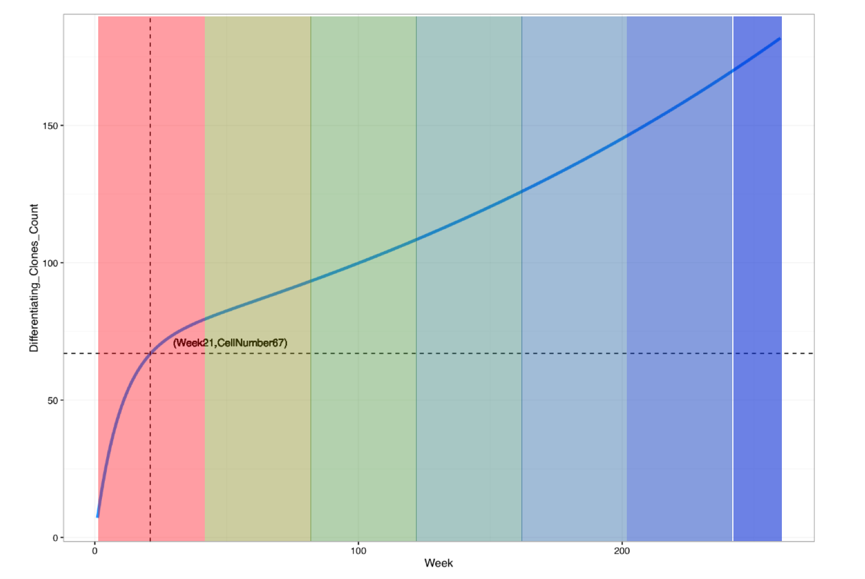 Figure 6 shows the stochastic result of our cell survival model. Bold blue line represents the number of HSCs in the HSC reserve (reaching maximum capacity at about 900 weeks). The stochastic model resembles the deterministic one, both in curve shape and in the end point. The blue vertical line indicates the end of fifth year. 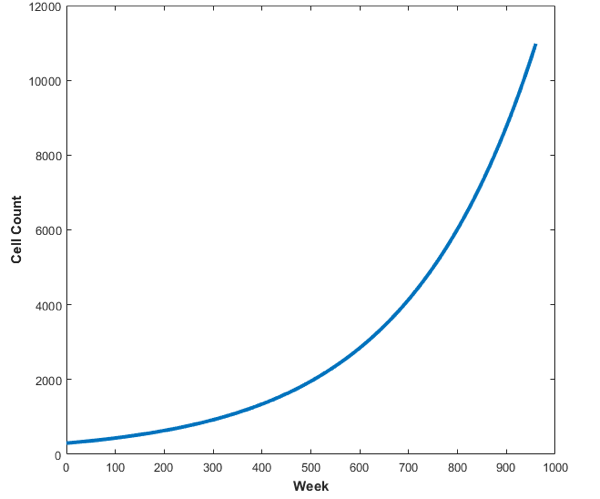 for HSCs that divide along this time of period, while yellow and red account for the cumulative cell emigration and cell death, respectively. 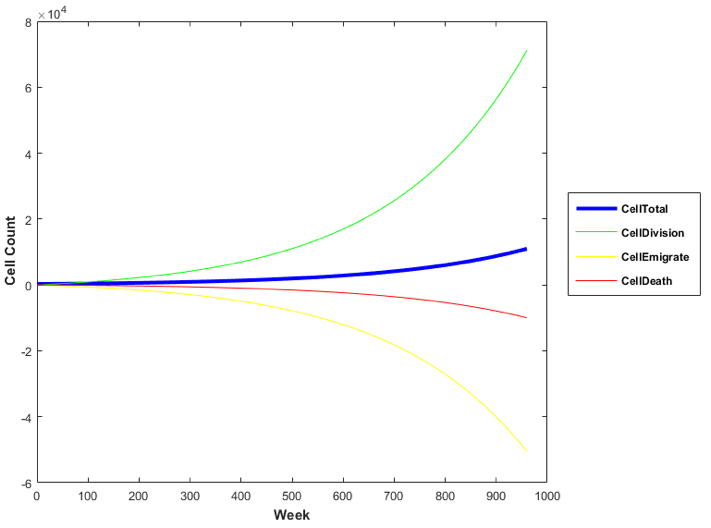