Cell cycle confirmation of Hela and A549 by flow cytometry

Cell cycle of Hela were treated by double-thymine block and cell samples were collected every two hours after the second release from 0h to 14h. Samples were dyed by PI and analyzed by flow cytometry. From the result it can be seen that the cell cycle of Hela is approximately 12 hours. 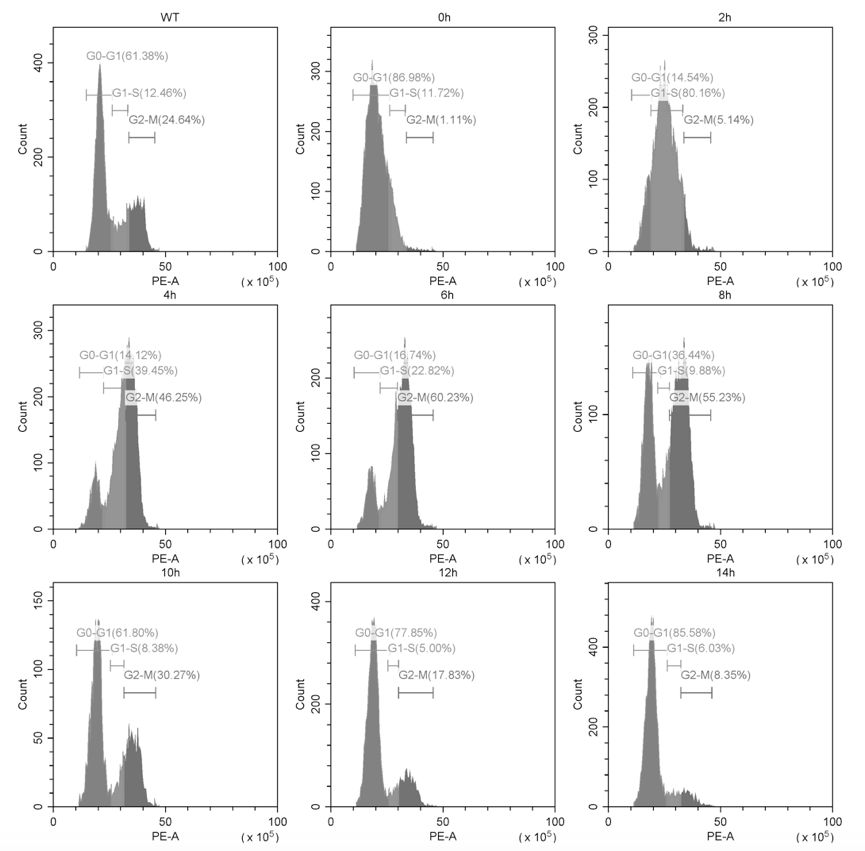 Cell cycle of A549 were treated by double-thymide block and cell samples were collected every four hours after the second release from 0h to 12h. Samples were dyed by PI and analyzed by flow cytometry. From the result it can be seen that the cell cycle of A549 is approximately 12 hours. 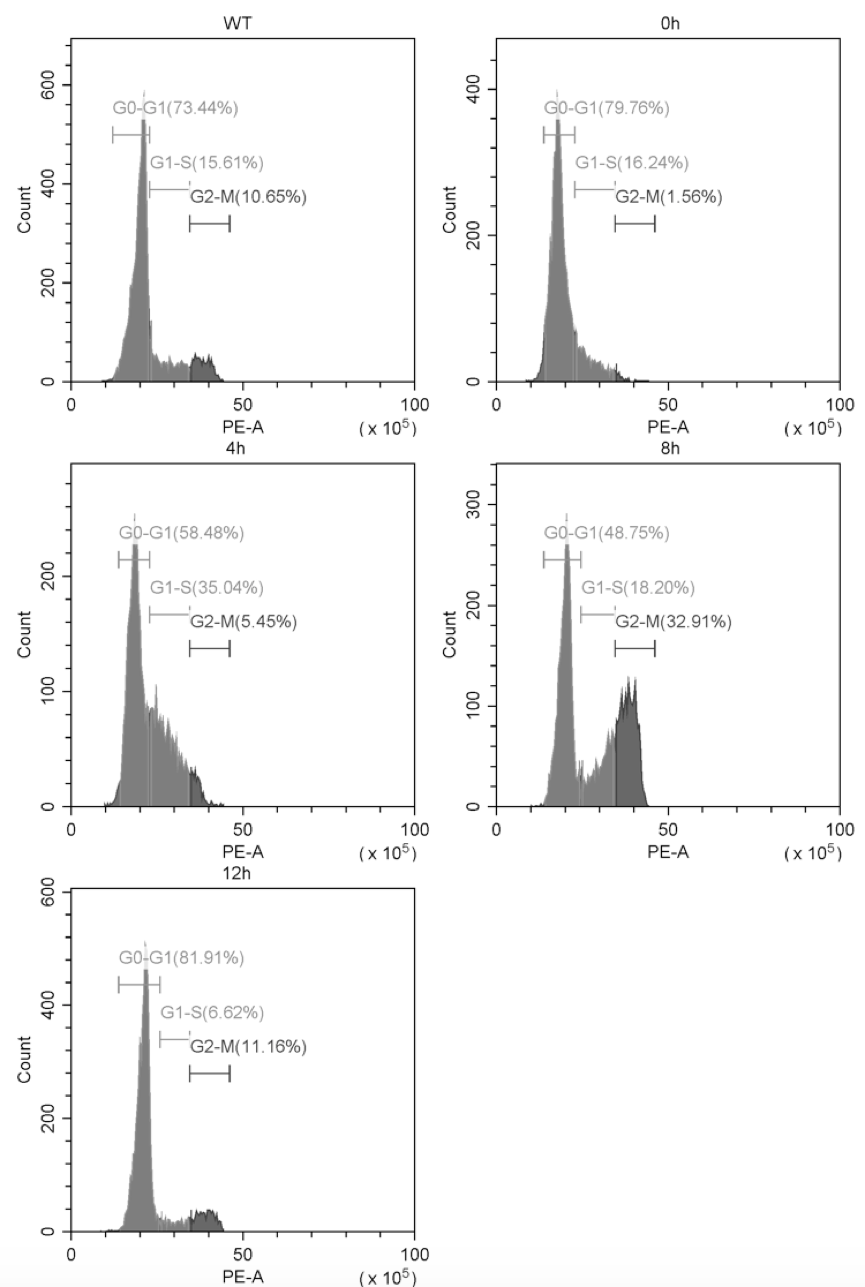 pCDK4, pKi67 and pCCNE are our G1 promoters. pmPGK is the constitutive promoter of mouse PGK, it is a medium promoter, here used as a control. By comparing with the control, it can be seen that all three of our G1 promoters have promoter functions, resulting in the expression of GFP, and pCCNE is the strongest.

Therefore, we could move on to the confirmation of whether the promoters are strictly regulated in G1.

Stable G1 promoter-SNAP 293T cells were built. Cells were treated with double-thymine block, and during the second release, reagents were added and samples were collected to carry out the confirmation.

293T cells were arrested at G1/S phase with duel-thymidine. Cells were treated with 5μM SNAP-tag substrate, imaged and collected at 2h, 5h and 18h after the second release. After sample collection at 2h, 10μM SNAP-Cell Block were added to the rest of the wells to block existing SNAP-tag.

SNAP were detected using microscope, and flow cytometry analysis was accordingly carried out to confirm the state of the cells, and the cell cycle of wild type 293T cells served as experimental control.

At 18h, the cells were again at G0/G1 phase (Fig. 7 g-i), and SNAP-tag was again detected, which means SNAP-tag was expressed during G1 phase.

From the results, it could be confirmed that three G1 promoters of pCDK4, pKi67 and pCCNE work once a cell cycle during G1/S phase.

Needed to be pointed that, SNAP-tag fusion protein locates at cell membrane. In 2h and 18h result Fig. 5 d-f and Fig. 7 d-f, fluorescence mainly focus on boundary between cells, and a cell is shown as an empty area surrounded by fluorescence. Comparing with 5h result, in which all SNAP-tag are block and no fluorescence is detected, we believe that the fluorescence shows SNAP-fusion protein on cell membrane rather than residual SNAP substrate.

Moreover, the SNAP-tag fusion protein degrades at a certain rate. The results from 2h and 18h (Fig. 5 d-f, Fig. 7 d-f) show different fluorescence intensity at G0/G1 phase and G1/S phase. We believe that the different proportion of G1 cells led to different SNAP expression rate, and consequently led to different fluorescence intensity, which also confirms that the SNAP-tag fusion protein degrade at a certain rate.This means there were no SNAP-tag expression during S phase. 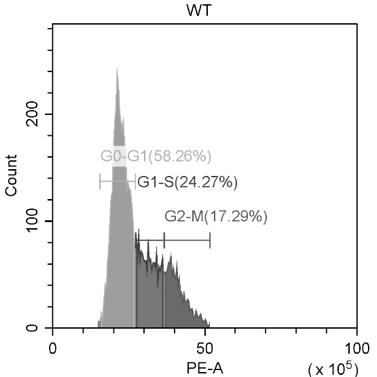 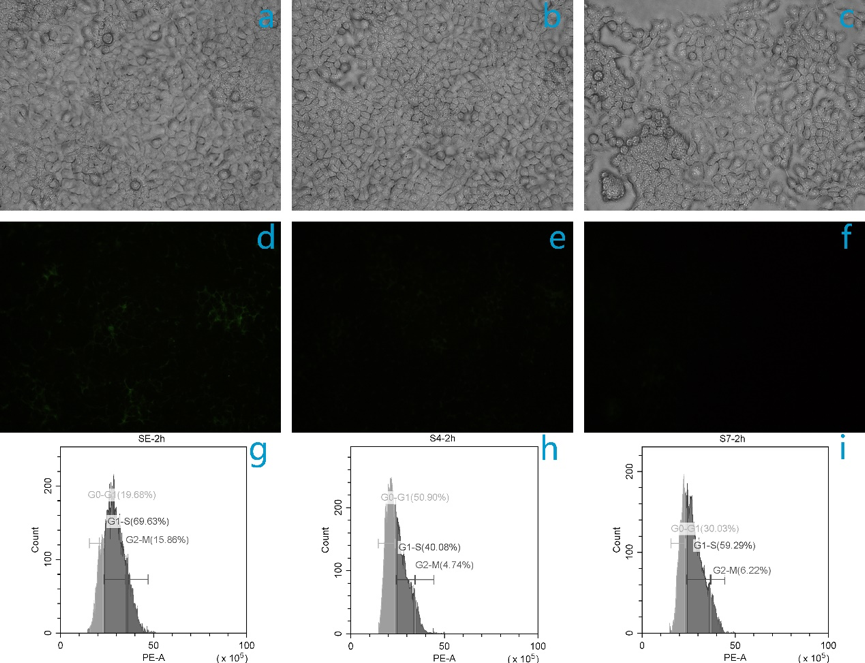 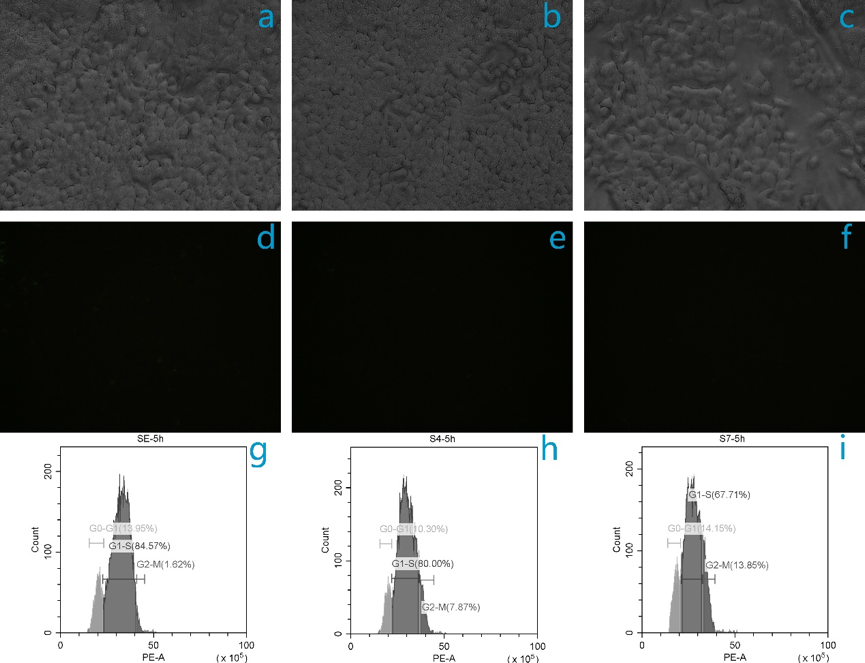 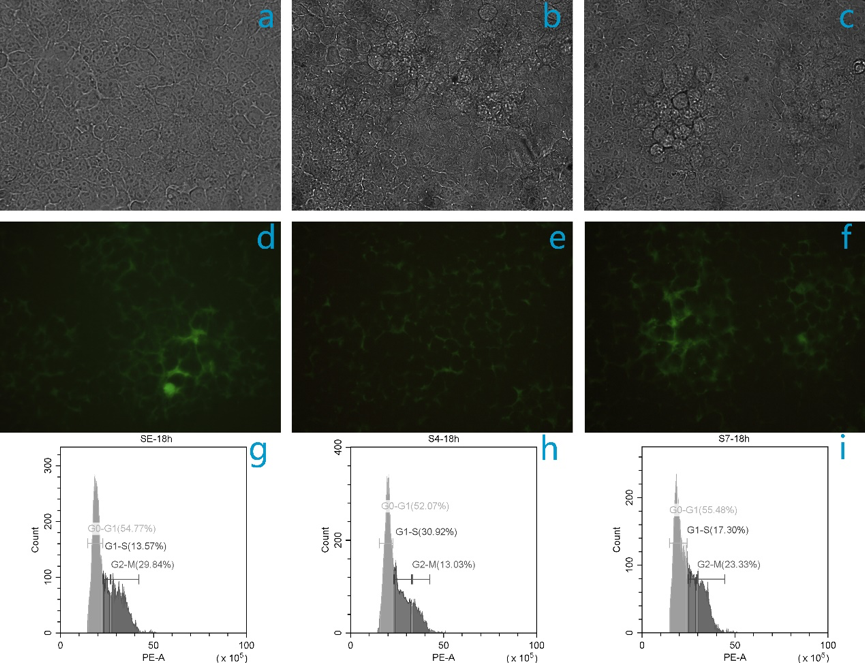 Confirmations for the final system testing

Referring to the procedure of testing our Cyclebow, there are two things that require confirmation:

1) Whether the majority of cells will be blocked in G1/S after the first thymidine block.

2) Whether 16 hours after induction by Doxycycline is enough to express Cre.

Only when the cells are synchronized can our results gain statistical significance. It is known to all that the cell cycle right after the thymidine block is synchronized, but the cycles after that go wild again. As we want to track two cell cycles, we decided to make use of the second thymidine block. Usually, cell cycle synchronization requires double-thymine block, so if we want to switch on our system during the second block, we will need to confirm that the majority of cells are blocked in G1/S after the first thymidine block (if the majority doesn’t, imagine the mess of colors!).

Comparing BLOCK1 and BLOCK2 in the flow cytometry analysis, it can be seen that more than 90% of Hela and more than 95% of A549 were blocked in G1-S state after the first block, and there is no significant higher efficiency between blocking once or twice. Therefore, it is confirmed that majority of cells will be blocked in G1/S after the first thymidine block.

The majority of cells can be blocked in G1/S after the first thymidine block is confirmed. Therefore, it would be feasible to add Dox right after the first release, so now we need to confirm that 16 hours after induction by Doxycycline is enough to express Cre (approximately 16 hours from first release to G1 state of the second cell cycle). Since this time protein level is to be inspected, we used Western Blot.

Because our Cre does not have a tag, and we don’t have the antibody of Cre, we borrowed a Dox inducible stable cell line from the host lab to carry out our confirmation. Samples were collected 16 hours and 24 hours after adding Dox. From Western Blot result, it could be seen that target protein could be expressed 16 hours after Dox induction. 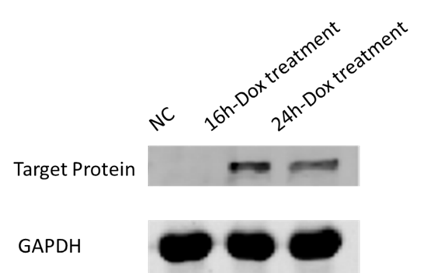